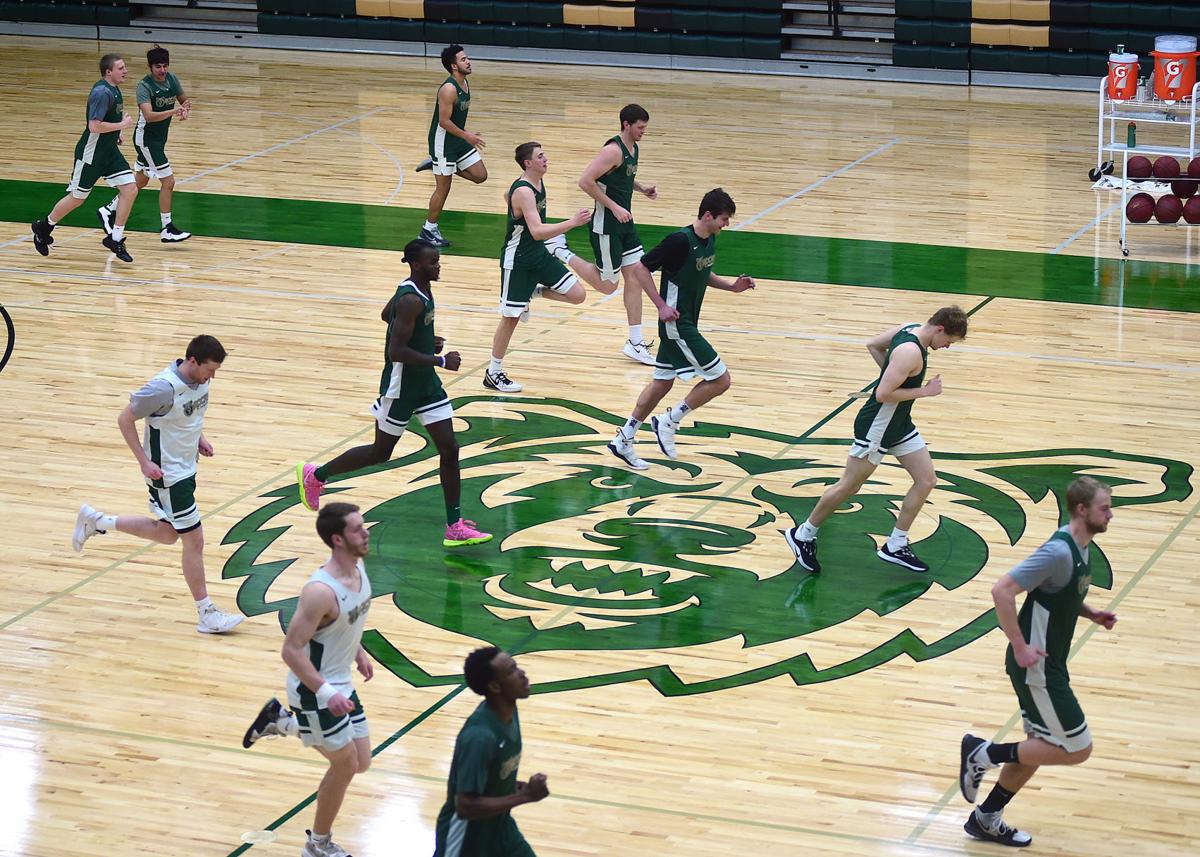 Members of the Rocky men's basketball team warm up on the new gym floor at the Fortin Center on Monday afternoon. 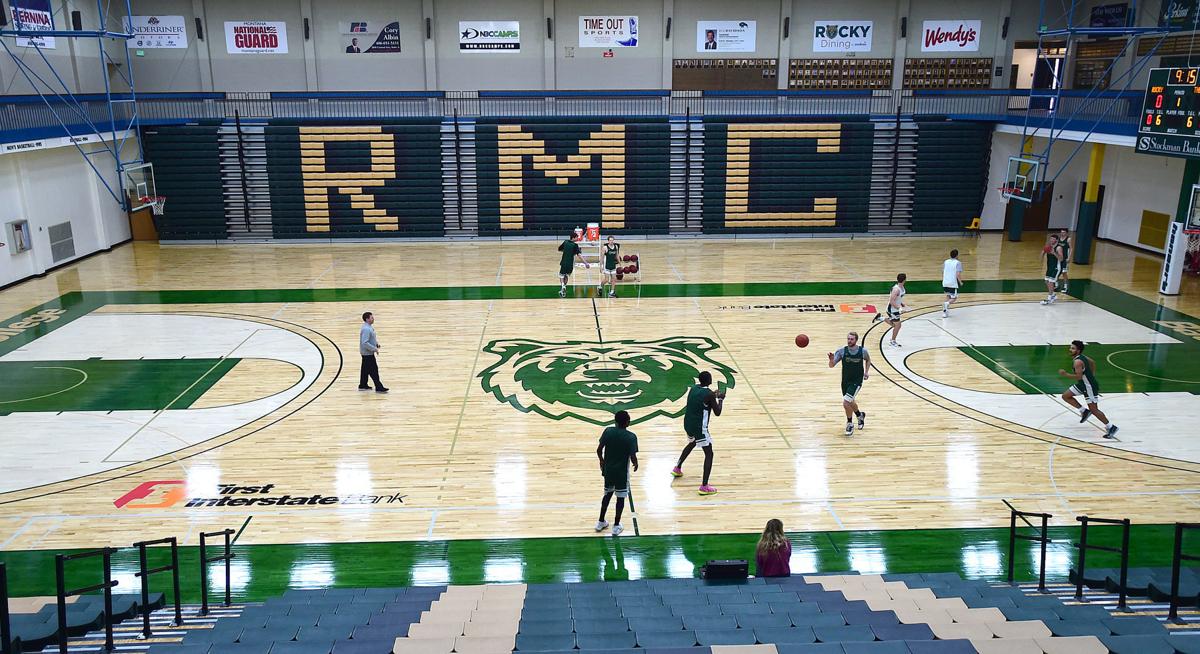 The Rocky men's basketball team practices on the new gynmasium floor at the Fortin Center on Monday afternoon. 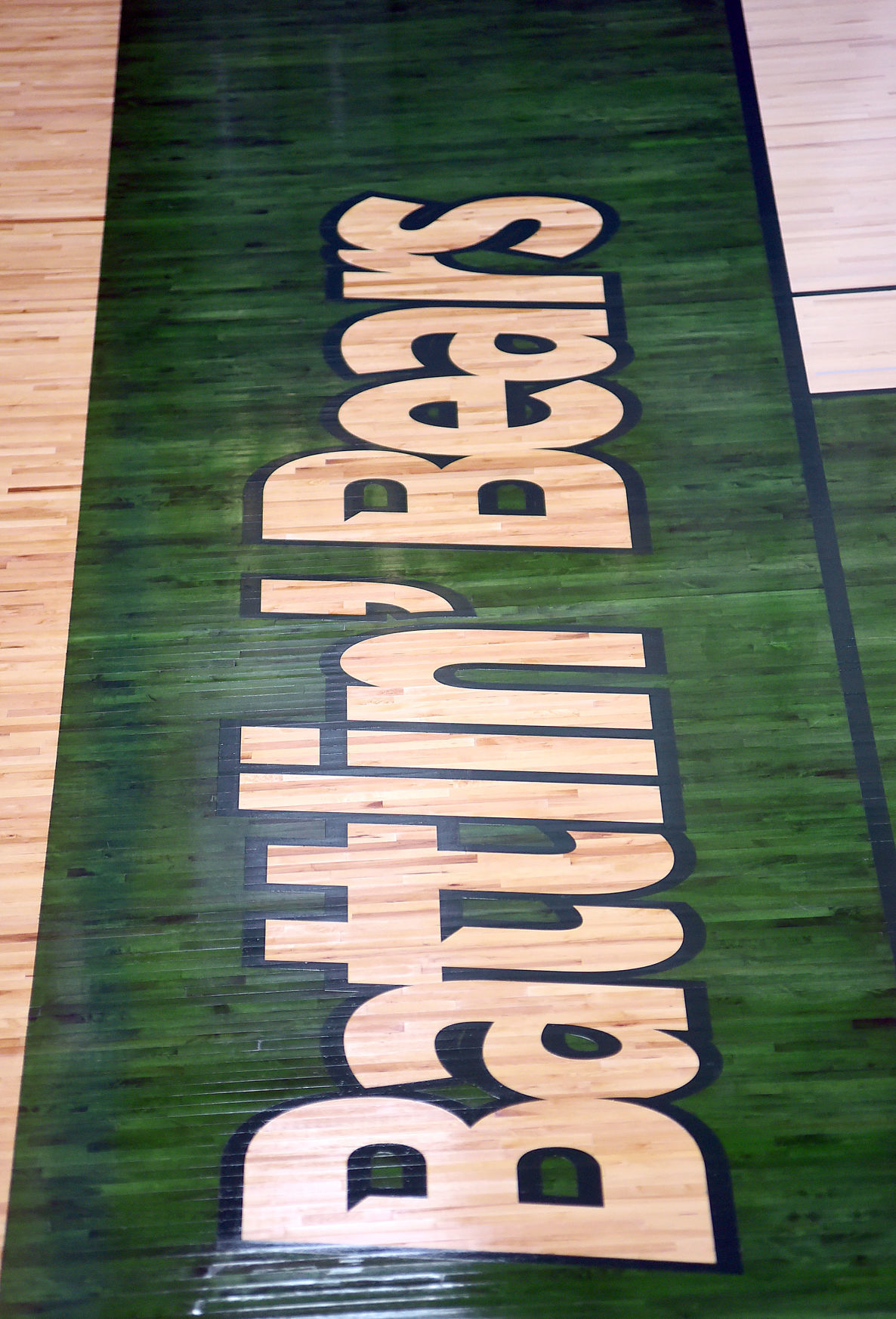 Rocky Mountain College has a new gymnasium floor at the Fortin Center.

Members of the Rocky men's basketball team warm up on the new gym floor at the Fortin Center on Monday afternoon.

The Rocky men's basketball team practices on the new gynmasium floor at the Fortin Center on Monday afternoon.

Rocky Mountain College has a new gymnasium floor at the Fortin Center.

BILLINGS — The men’s and women’s basketball teams from Rocky Mountain College have been proverbial refugees this season, which forced them to play most of their “home” games at First Interstate Arena at MetraPark and left them scrambling on occasion to find the appropriate time and space to practice.

But their displacement has come to an end with the installation of a state-of-the-art gym floor. Now the Battlin’ Bears are set to officially break in their new court Wednesday night with a Frontier Conference doubleheader against Carroll College, their first games at the Fortin Center since last season.

“There’s no place like home, right?” stated longtime Rocky men’s coach Bill Dreikosen. “The kids are excited to play at their own facility.”

A water pipe broke last April outside Dreikosen’s court-level office, causing extensive damage to the south edge of the floor on the baseline and necessitated the upgrade. Rocky commissioned Western Flooring of Missoula for the job, which athletic director Jeff Malby said was a $300-$400k project.

Rocky was able to play its home volleyball matches on the old floor last fall, and the athletic department waited until it put on its annual Black Tie, Blue Jean scholarship fundraiser at the Fortin Center in November to begin the refurbishment.

Soon after, crews started ripping out the 50-year-old wooden surface, which had been in use since the building was completed in 1969.

The @BattlinBears are back in the Fortin Education Center! @RMC_Montana's new gym floor is painted and complete.@RockyWBB and @RockyMtnMBB will face the @CCSaints on Wednesday for their first home game on First Interstate Bank Court this season.

As for the design, an emphasis was placed on reinstating Rocky’s brand-standard colors. Thus, the former black-painted baselines are now stained green, as are the free-throw areas and the large bear head logo at midcourt.

An off-white shade was used inside the 3-point lines to contrast the color scheme. “Rocky Mountain College” is spelled out on the north baseline and “Battlin’ Bears” is stenciled on the south end.

The dimensions of the volleyball boundaries were also improved.

“I think it looks really sharp. It’s classy,” Dreikosen said. “We’re really happy with the way the design went. I know (Malby) put a lot of time and effort and thought into that process.”

The new floor also has more give, which Malby and Dreikosen said will be beneficial to players’ joints and soft tissue over time.

The smell inside the Fortin Center is unmistakably that of a new gym floor.

“I heard a lot of our guys say, ‘I love the smell of a new gym,’” Malby said. “And they’re going to see a noticeable difference in how it feels.

“They’re excited. Our campus is excited. People in the community are wanting to see it. It’s a different excitement than normal. Most of the time when you replace a floor it’s in the summer and no one really knows, no one really cares.

“This gives us back our home-court advantage. We haven’t had crowds really to speak of. I think we’ll get more on-campus support.”

Rocky’s men’s basketball team played seven home games away from the Fortin Center through the first 2½ months of the season — five at First Interstate Arena and two at the Shrine Auditorium. The Bears went 5-2 in those games.

Practice was the primary challenge, with the teams having to at times use high school and middle school gyms around the city for workouts.

Of that drawback, Malby said the coaches and players “handled it beautifully. They embraced it. They knew there was light at the end of the tunnel.

“It was an inconvenience, but the big picture was we were getting a new floor. They lived through it, though it wasn’t easy.”

Rocky’s men will bring a 6-6 overall record and a 1-3 Frontier Conference mark into Wednesday’s matchup with first-place No. 23 Carroll (13-3, 4-0). The Saints are the last remaining unbeaten team in the Frontier.

Regardless of the hoopla of surrounding Rocky's home for the first time this season, these are important games.

“Whether you’re at home or on the road you’ve got to play well to win, but I think every team knows that there’s just something about playing at home,” Dreikosen said.

“In the Frontier, it doesn’t matter who you play, it’s going to be a tough night.”

The Battlin' Bears are hoping for a little home-court magic.

Rocky's Kloie Thatcher chosen as Frontier's player of the week

BILLINGS — Kloie Thatcher of Rocky Mountain College was selected Monday as the Frontier Conference's women's basketball player of the week.