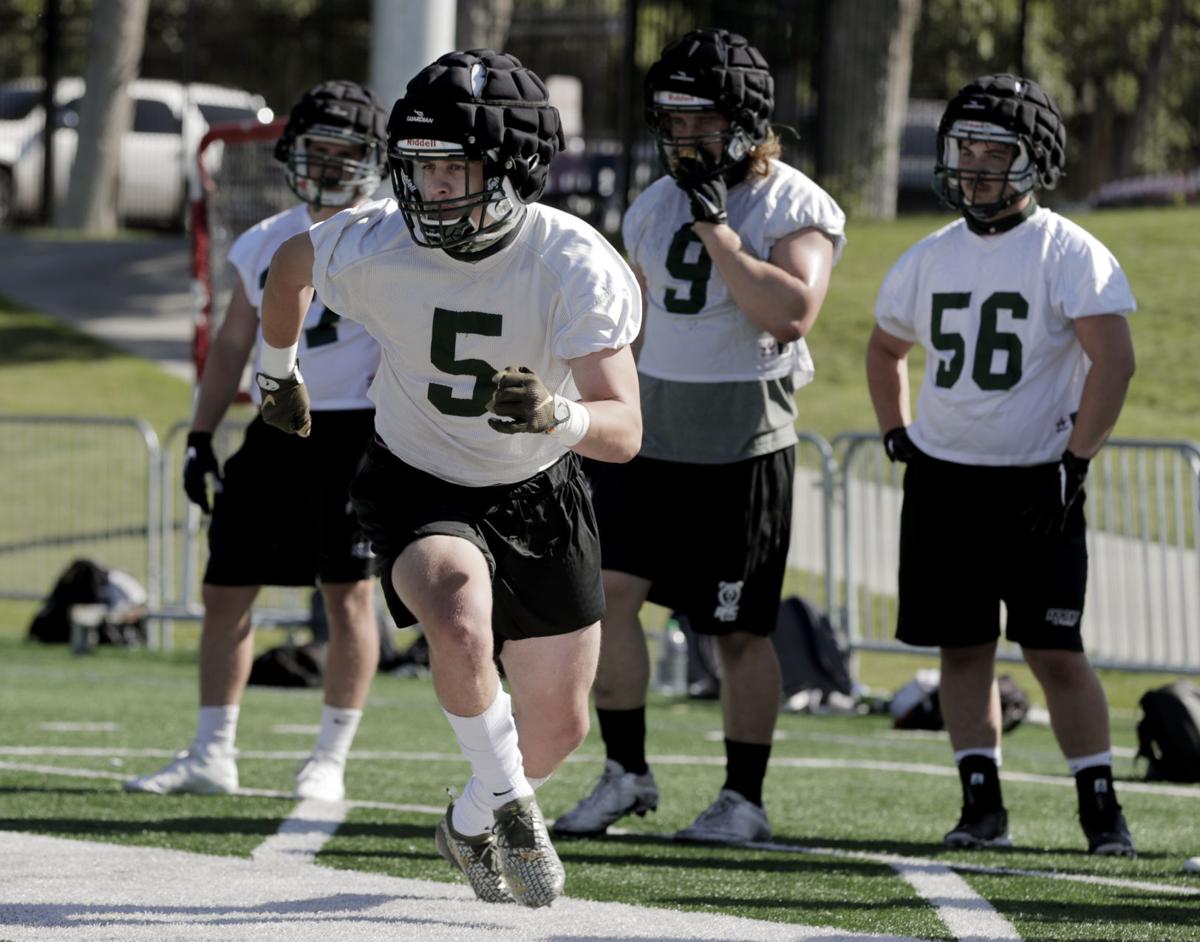 Rocky linebacker Dallas Mack missed all of last season with a knee injury. Now he will continue to wait to play his next game. 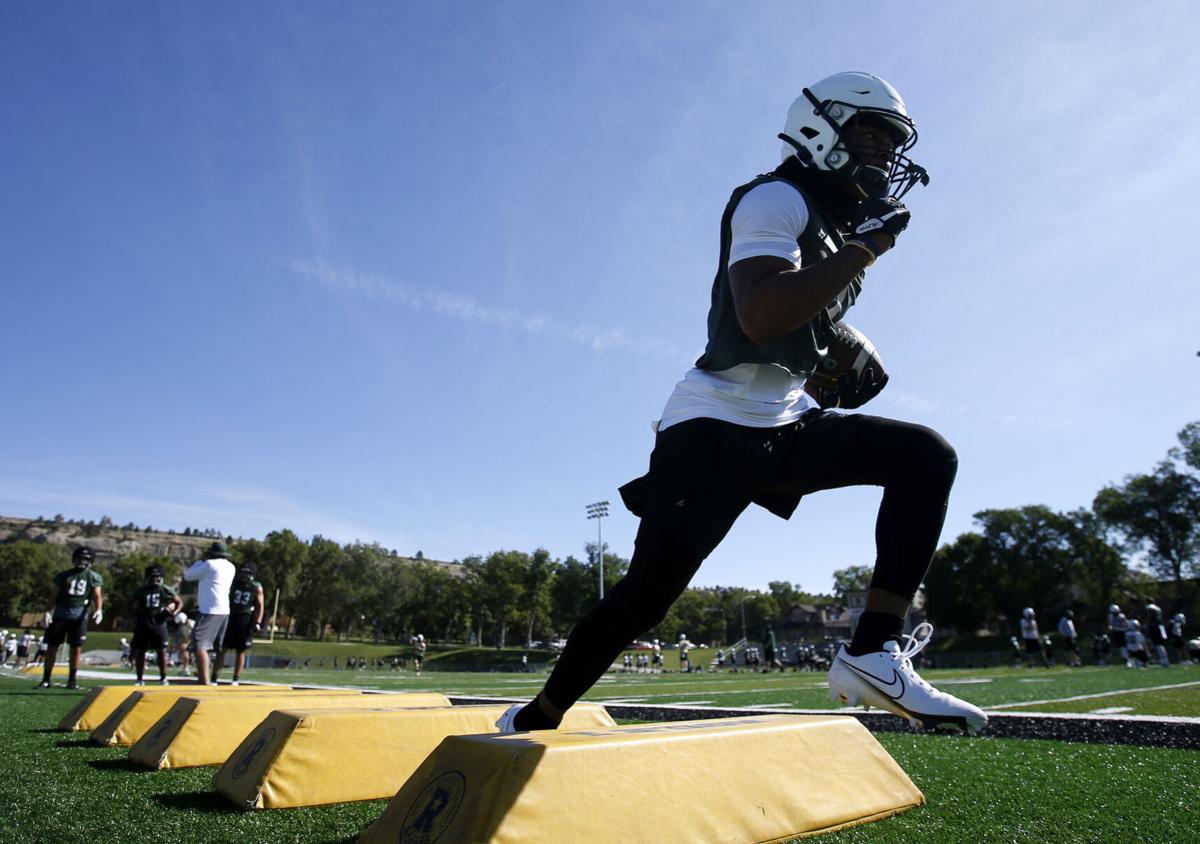 Rocky linebacker Dallas Mack missed all of last season with a knee injury. Now he will continue to wait to play his next game.

BILLINGS — Chris Stutzriem, Rocky Mountain College’s second-year football coach, said his objective for the Battlin’ Bears’ first practice of fall camp was to allow for his team to push aside the circumstances of the past five months and focus on improvement and team chemistry.

It didn’t take much convincing.

From the looks of it on a sunny Saturday at Herb Klindt Field, players momentarily forgot about the fact that they won’t play games this fall — a reality they’re coming to terms with amid the ongoing and seemingly endless coronavirus pandemic.

The team simply took advantage of the opportunity to be on the field together again, rotating between individual positional drills and seven-on-seven repetitions with smiles all around.

“The biggest thing was making sure guys were as comfortable as possible,” Stutzriem said after a two-hour, helmets-only practice. “I think this morning there was a little bit of weirdness, but we had a great team meeting and everybody was on the same page about keeping each other healthy.

“I loved the intensity of the guys today and they took care of each other. I think guys had a lot of fun.”

Quarterback Nate Dick showcased his ability during seven-on-seven work, hooking up with receiver Sawyer Silliker on a deep ball up the seam.

Meanwhile, Andrew Simon probably made the day’s best catch, adjusting his body to haul in a pass that was well behind him.

And freshman Jack Cline of Miles City wasted no time making his presence known when he secured the day’s only defensive takeaway with an interception. That play drew the loudest cheers from the team.

Like most leagues across the country, the NAIA Frontier Conference announced a plan earlier in the week to delay the 2020 football season until the spring, the result of COVID-19’s continued impact.

But the original idea, after fall sports at affiliate league members Eastern Oregon, Southern Oregon and the College of Idaho were shuttered, was for Montana's Frontier teams to play an eight-game, round-robin season amongst themselves.

But it wasn’t to be.

So Rocky’s players are taking the good with the bad.

“It’s good to be able to shake off all that rust that we’ve been sitting with since last November when we last played,” said Drew Korf, who will compete with Dick for the starting QB job until games are playable again.

“Our coaches have done a really good job of keeping us engaged. I think every day we just kind of prepare like we’re going to be playing that weekend and try to get better. We’re not really sure what’s going to happen, but we’re just trying to have fun while we can.”

One player echoing that sentiment is senior linebacker Dallas Mack, who had so much hope for a season this fall.

A year ago, Mack was still rehabbing from a torn ACL he suffered during spring ball and was unable to play the 2019 campaign. He’d planned on a triumphant return to the field this year as one of the Battlin’ Bears defensive leaders.

Instead, he must wait even longer.

“With everything going on in the world it can be hard to have a positive outlook,” Mack said after taking part in his first official practice in 16 months. “But out here we can have fun with our brothers, our family.

“This is what I’ve worked for. All that rehab. Sometimes you can get down on yourself and it’s tough, but as long as you have good teammates and good coaches pushing you every single day it’s nice to be back out here.”

Rocky is expected to conduct 11 more practices, the last of which will be a scrimmage on Aug. 30.

Though a spring season is the goal, no one can predict what will happen tomorrow, much less sixth months from now.

Until we know, the Battlin’ Bears are intent on competing together as a team.

“Right now we would be thinking about the upcoming season, and maybe some guys have been thinking, ‘Ok, are we playing five months? Six months?’ I just told them we need to take it day by day,” Stutzriem said.

“Who knows what’s going to happen? We might not get tomorrow, so let’s take advantage of today.”