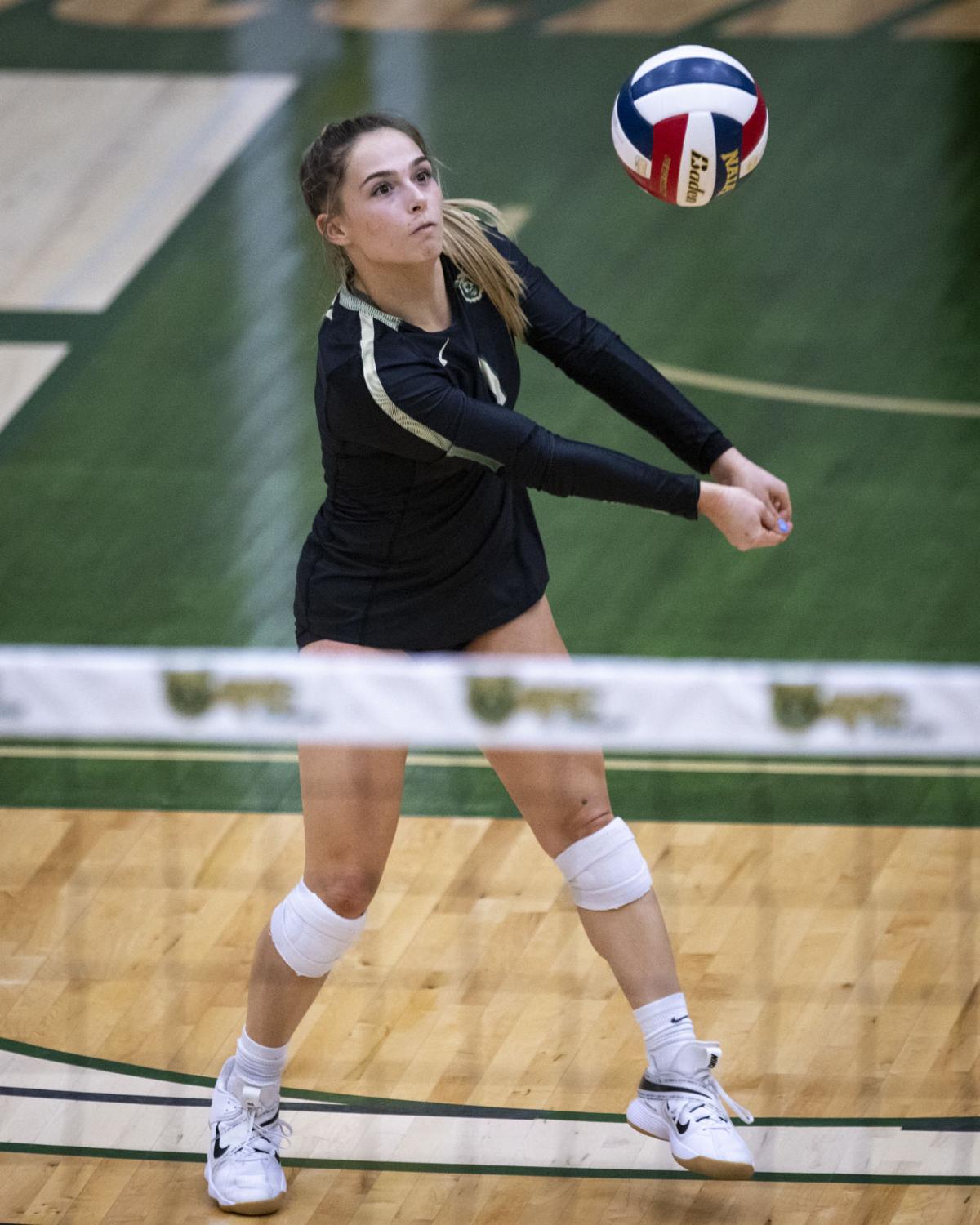 Rocky libero Ayla Embry bumps the ball during a match against Montana Western on March 20 at the Fortin Center in Billings. 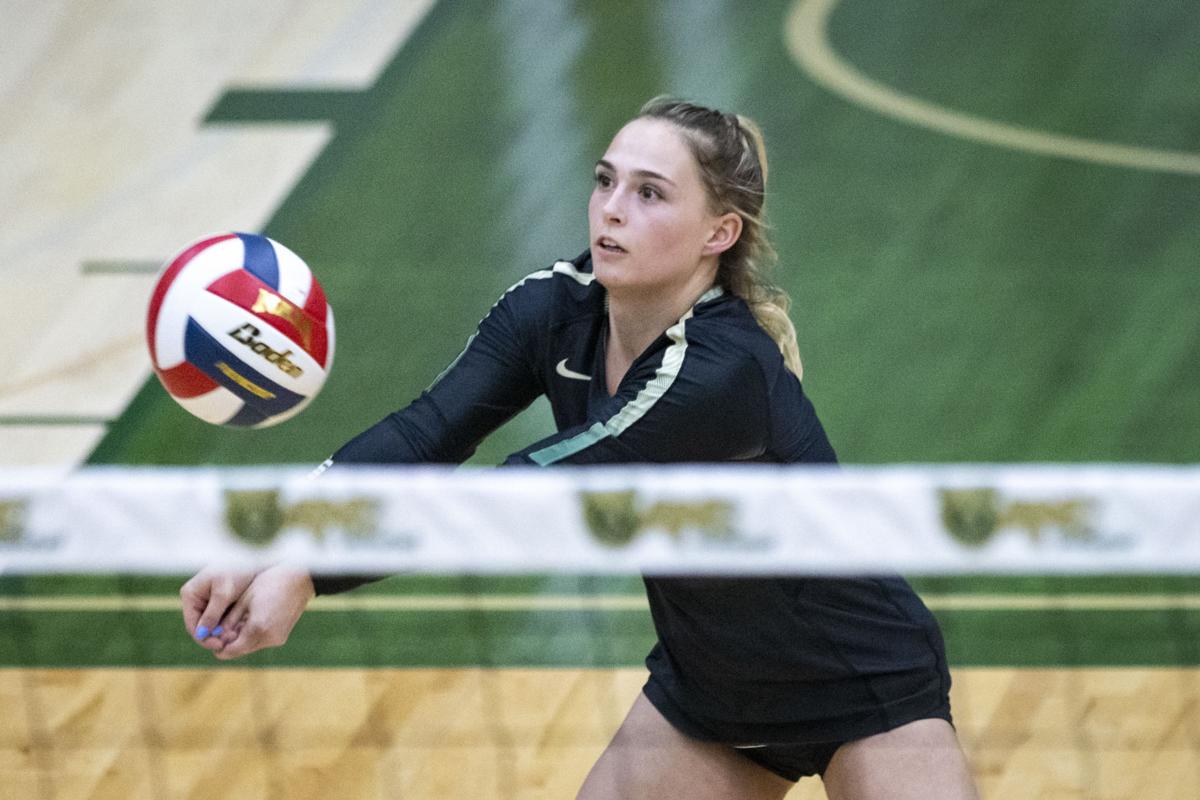 Rocky libero Ayla Embry, a Bozeman High graduate, was recently named Frontier Conference defensive player of the year. Embry and the Battlin' Bears are traveling to Sioux City, Iowa, this weekend for the remainder of the NAIA national tournament.

Rocky libero Ayla Embry bumps the ball during a match against Montana Western on March 20 at the Fortin Center in Billings.

Rocky libero Ayla Embry, a Bozeman High graduate, was recently named Frontier Conference defensive player of the year. Embry and the Battlin' Bears are traveling to Sioux City, Iowa, this weekend for the remainder of the NAIA national tournament.

BILLINGS — Natalie Hilderman says Ayla Embry is one of the toughest volleyball players she’s ever been around.

It’s not because of Embry’s willingness to stand in against the strongest and most powerful swings and spikes the Frontier Conference has to offer, or that she’ll dive, slide and tumble at all costs to keep plays alive on her side of the net (though she does all of the above with great frequency).

Embry, Rocky Mountain College’s all-conference libero and back-row stalwart, has earned her stripes also because she’s withstood and played through immense physical pain caused by a debilitating back injury, and because of her propensity to put the team’s fortunes ahead of her own.

“I know she’s in pain every single day but she doesn’t show it on the court,” said Hilderman, Rocky’s senior setter and offensive catalyst. “She just fights through it, and I think that’s really impressive.”

Next week, the Battlin’ Bears will continue on at the NAIA national tournament in Sioux City, Iowa. Their first pool-play match is scheduled for Tuesday against Indiana Wesleyan. Rocky’s three-team pool also consists of Midland (Nebraska).

The Bears advanced with a first-round home sweep over Bushnell (Oregon) last week.

First serve for the Rocky-Indiana Wesleyan meeting is scheduled for 9:20 a.m. Mountain time. It is available for online streaming via pay-per-view on the NAIA Network at https://portal.stretchinternet.com/naia.

Embry, a sophomore from Bozeman who was recently named Frontier Conference defensive player of the year, has figured greatly into the Bears’ success during this inside-out spring season and will continue to do so as they chase a berth among the top-eight teams for single-elimination bracket play at the Tyson Events Center.

But Embry’s road hasn’t been easy. Last year, when she said her back was “killing” her, Embry was found to not only have a stress fracture but also bulging discs as part of a diagnosis of degenerative disc disease.

The pain has been difficult to overcome, and even a midseason steroid injection failed to provide much relief. But she refuses to miss a match — or even a point. Embry will reluctantly be held out of a practice or two, but that doesn’t sit well with her either.

“I just get super bad nerve pain in my back and in my legs. It’s like a sharp stabbing pain,” she described. “It gets hard at times, especially when my legs go numb. But I try to not think about it.”

Perhaps Embry’s in-game focus helps quell the discomfort. She definitely doesn’t allow the calamity to stop her from sprawling out and going low for any ball that comes her way.

Embry’s 7.1 digs per set rank second in the Frontier behind Sacha Legros of league champion Providence (which is also making the trek to Sioux City). Embry has 613 digs to Legros’ 672. Only one other player in the Frontier had more than 450.

Embry said she was a bit surprised to win the league’s defensive MVP honor, especially since she only started playing volleyball late in junior high school. But it was an encouraging and welcomed step in her development, though she is more complimentary of her teammates than she is of herself.

“When you play libero, it’s a really selfless position. You only can dig; you never get to score,” Rocky coach Yang Yang said. “I think she’s that kind of person. She is not selfish at all. She just wants to win and help the team win. It doesn’t matter. She will dig the ball and cheer for every point. She is one of our main keys.”

“I just try to not let any ball hit the ground, be aggressive and kind of try to frustrate the other team and get in their heads a little bit thinking that they can’t score because we’re always there and in the right place at the right time,” Embry said.

Embry doesn’t discount the possibility that her back injury could worsen as her volleyball career continues, but she also said she had no intention of stepping away from the game or her teammates.

She will play, she insists, until she can’t anymore.

It’s that kind of dedication that has allowed Embry to personify toughness, and earn the respect of everyone in the Rocky program.

“She’s one of the toughest people I’ve ever played with,” Hilderman said. “You can’t tell she’s in pain out there but I know she is. She goes after every ball. She wants to get her digs and she shows up in every game.”

Spectators have not been allowed to attend any Frontier Conference athletic events this year, and Rocky has played volleyball in empty gyms with their parents and extended families having to watch or follow along from home.

That will change in Sioux City, as the NAIA is allowing fans to attend its volleyball championship.

Hilderman and Embry also said their parents are making the trip. For Hilderman and Thomson, it will mark their final games in a Rocky uniform.

“We’ve had a really good year and it’s been fun getting to enjoy it with the team, but I think this was always our goal, to make it to the final site because we knew our families would be able to come and watch us perform in person,” Hilderman said.

“We can’t wait to show them how hard we’ve worked over the past six months and that we’re ready for this.”