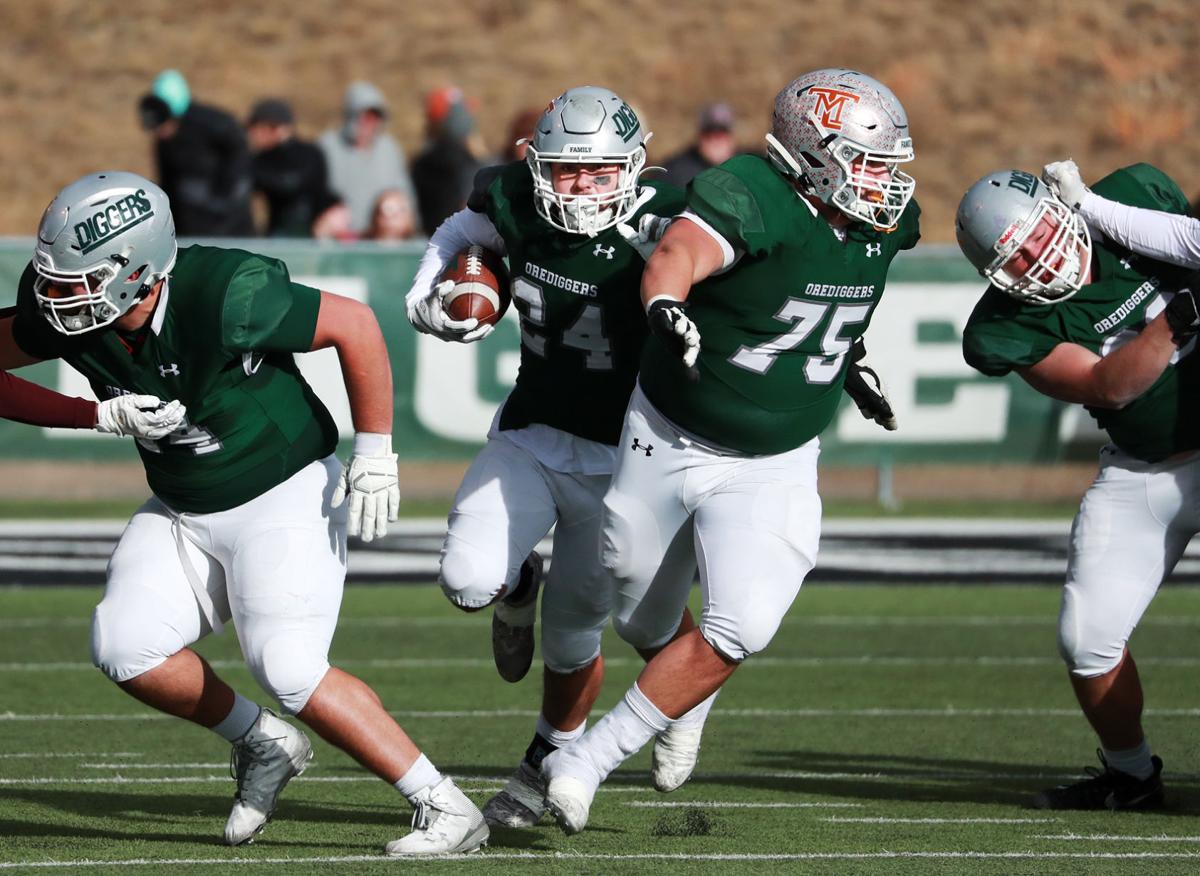 Carson Shuman, left, Hunter Spartz, center and Jack Hiller block for Blake Counts as he carries the ball for Tech during the first half of the Orediggers' home game Saturday. 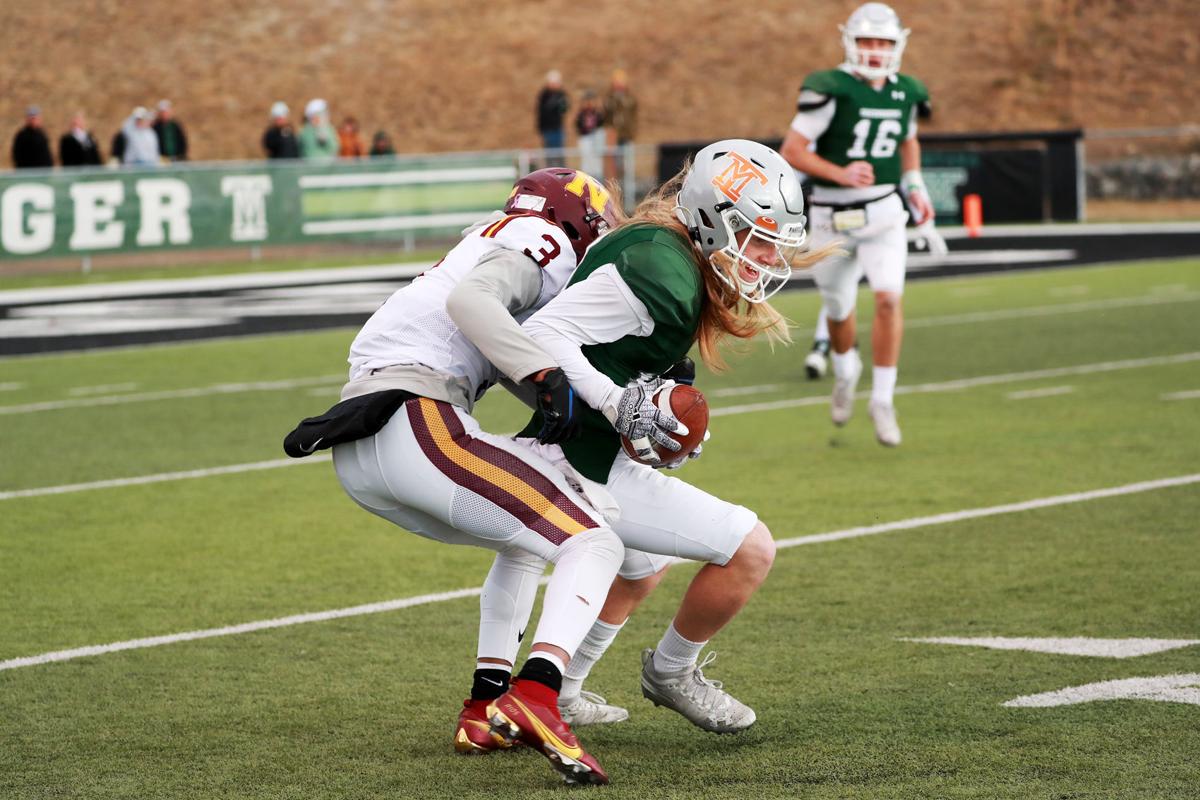 Tech wide receiver Kiley Caprara catches a pass during the first half of the Orediggers' home victory Saturday over MSU-Northern. 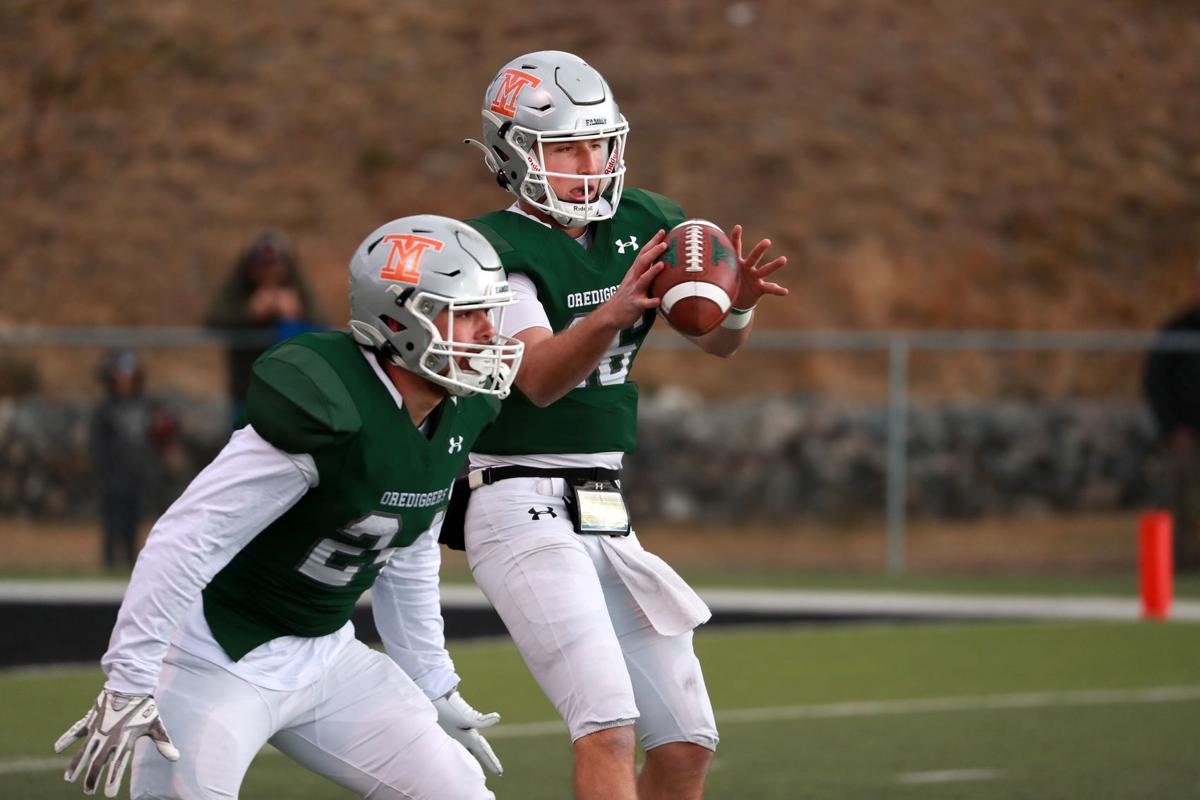 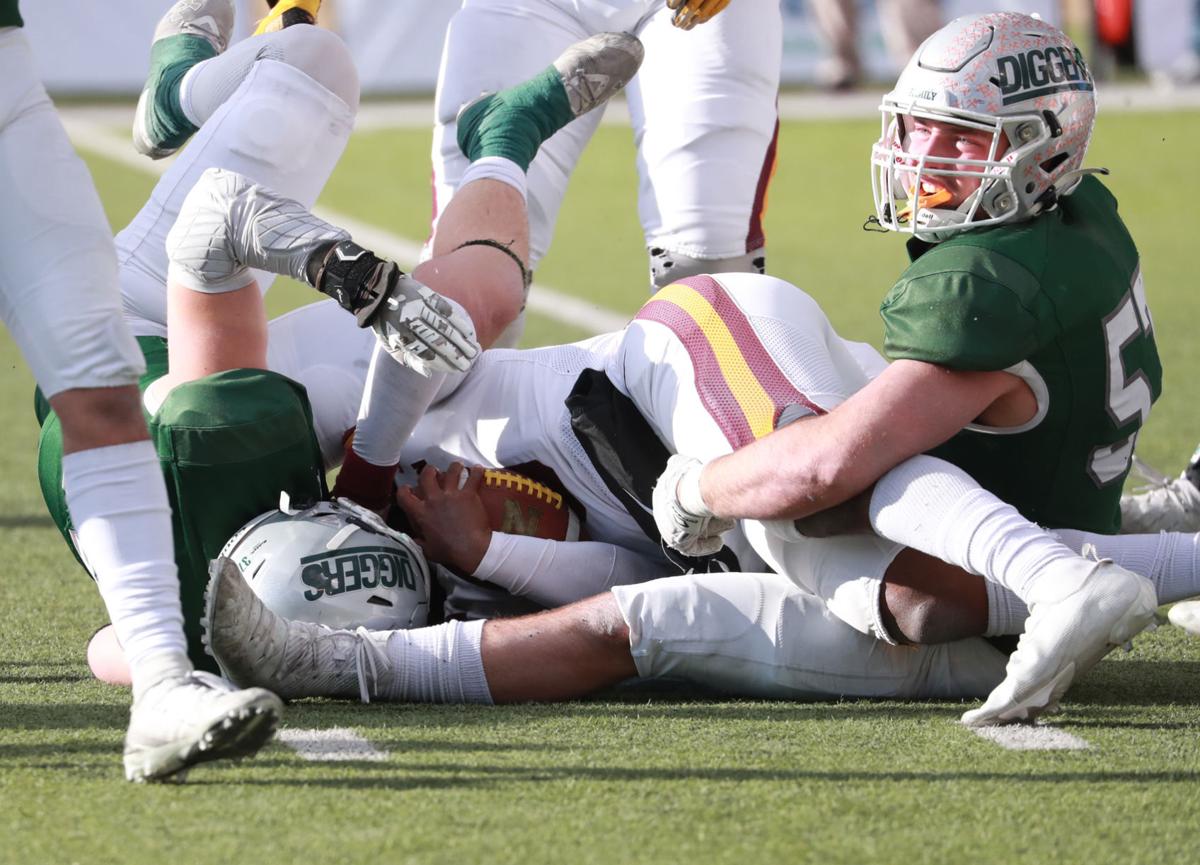 Tech defensive end Logan Kolodejchuk and others bring down MSU-Northern's Kaymen Cureton on Saturday in Butte. 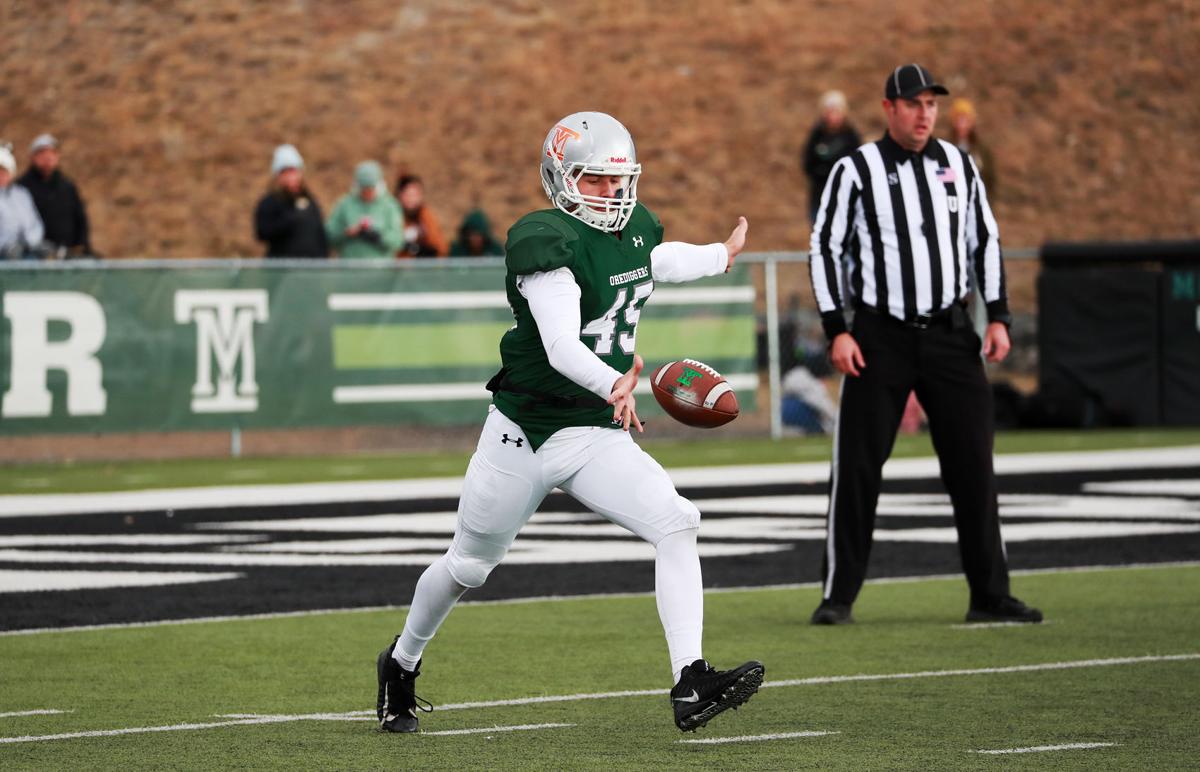 Tech's Andrew Almos punts the ball during the first half of the Orediggers' home game against MSU-Northern on Saturday. 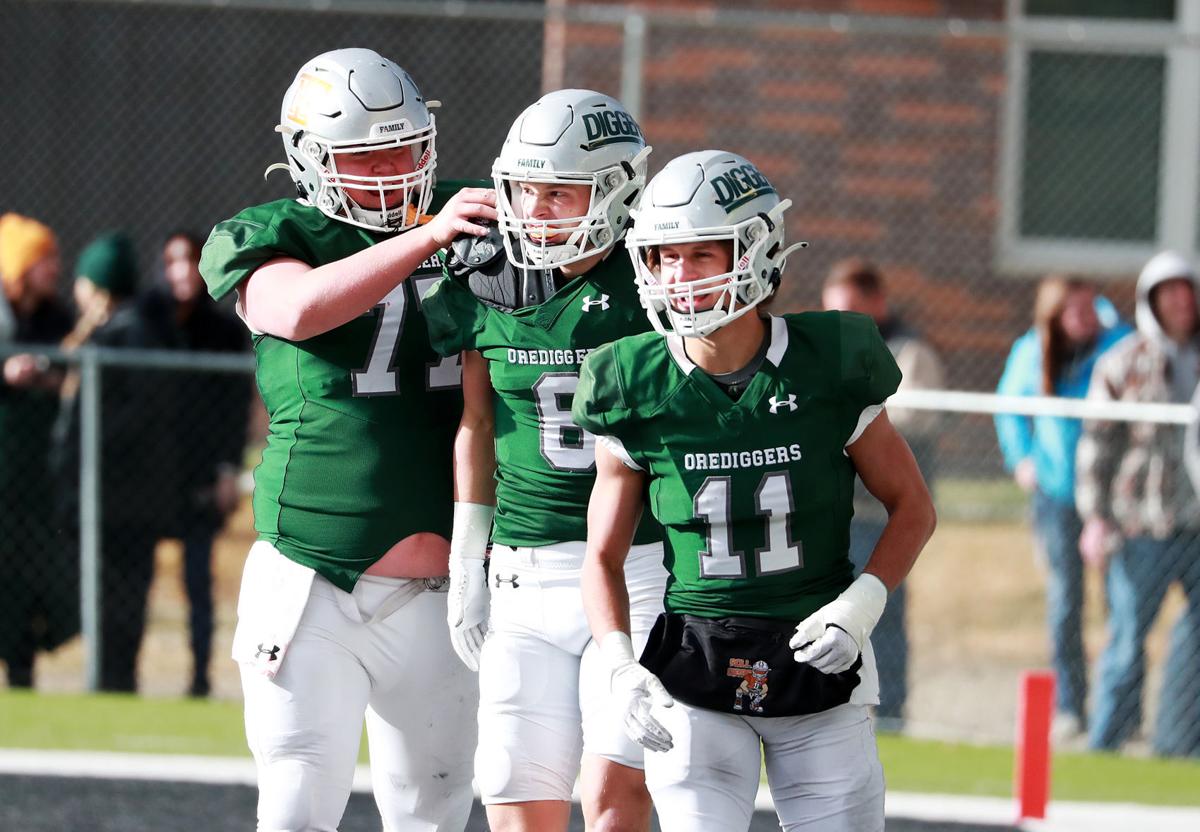 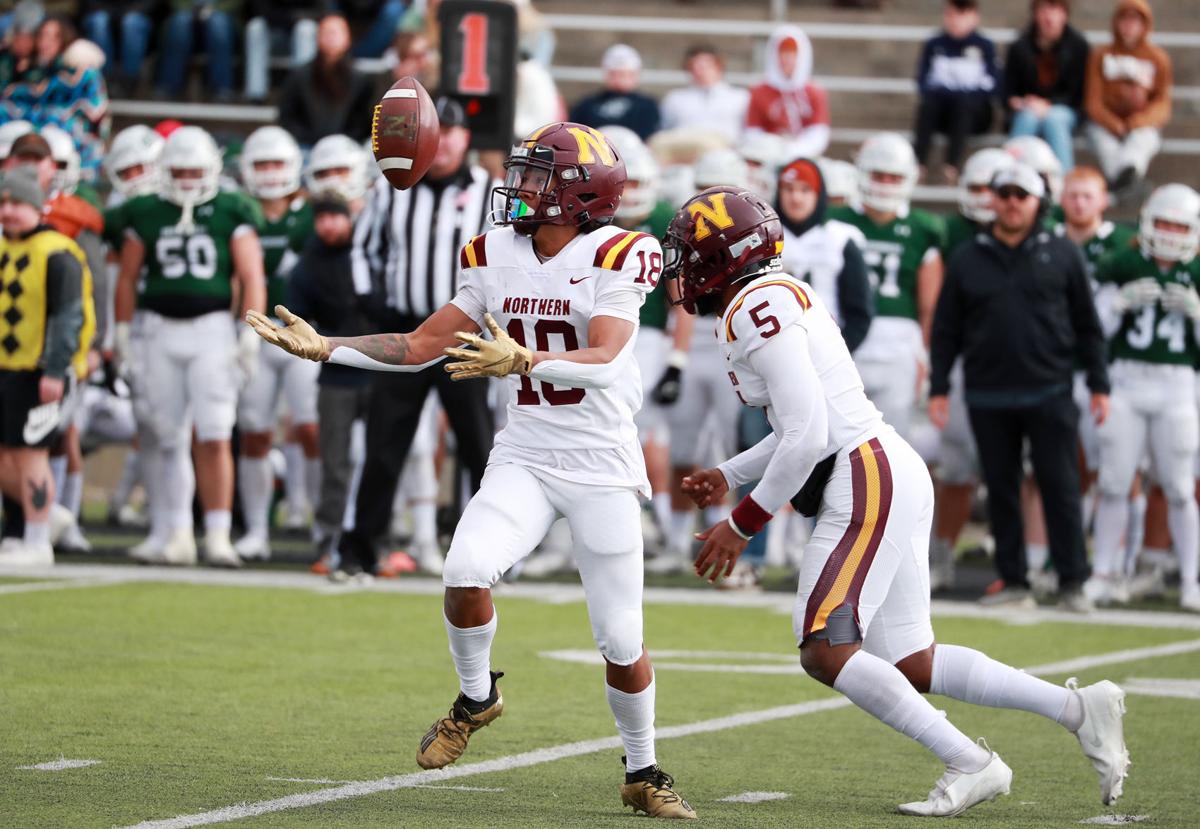 Carson Shuman, left, Hunter Spartz, center and Jack Hiller block for Blake Counts as he carries the ball for Tech during the first half of the Orediggers' home game Saturday.

Tech wide receiver Kiley Caprara catches a pass during the first half of the Orediggers' home victory Saturday over MSU-Northern.

Tech defensive end Logan Kolodejchuk and others bring down MSU-Northern's Kaymen Cureton on Saturday in Butte.

Tech's Andrew Almos punts the ball during the first half of the Orediggers' home game against MSU-Northern on Saturday.

BUTTE — In a coaching tenure that started with the COVID-19 shutdown, Kyle Samson's first season reached a crescendo Saturday afternoon at Bob Green Field. The Orediggers blew out the MSU-Northern Lights 41-0 on senior day in a game that featured three turnovers by the Montana Tech defense, including a fourth-quarter pick-six.

"I feel like we showed up and played our best game of the year on the last day of the season, which is a testament to our coaching staff, our players and our senior leadership today," Samson said. "I'm just so proud to be a Digger today."

After a rocky start to the season, the Orediggers played their best football after the bye week. Following the Oct. 16 bye, Tech won three of its remaining four games to finish the season 5-5.

"I want to thank all the fans for their support, and all the parents," Samson said. "And then a big shoutout to my coaching staff. They did a great job for us this year. What a great way to finish the year."

The late-season momentum is something Samson and company hope they can carry through the offseason and build on into 2022.

"We wanted to finish this game for the seniors, but it gives us a great springboard to the offseason," Samson said. "We finished the season very strong."

The win also came on senior day, as the Orediggers honored their nine seniors prior to the opening kickoff.

"What a way to send our seniors out," Samson said. "I'm so proud of those nine guys."

The game was highlighted by the Tech defense, which pitched its first shutout of the season. The Orediggers held the Lights (1-10) to just nine first downs, 26% on third down, 146 yards of total offense and forced 10 punts. A 42-yard interception returned for a touchdown by Kade Wilcox with 2:33 to play in the fourth quarter put an exclamation point on the effort.

"Defense just played tremendous today," Samson said. "It starts with our coaching staff, coach (Nick) Brautigam our defensive coordinator and his staff. They did a tremendous job. The guys executed the game plan, and what a way to send it out with a shutout like that. I'm just so proud of our defense."

The Orediggers were without starting QB Jet Campbell, who suffered an injury last week against Montana Western. Cade Wyant and Jake Standlee filled in nicely, alternating quarters and combining for 190 yards passing with 3 TDs.

"I was really proud of Jake and Cade," Samson said. "Both stepped up today and did a really great job at quarterback."

It was the ground game that really gashed Northern, though. Blake Counts racked up 147 yards on 13 carries, and Tyler Folkes had 74 yards on 18 carries. The Tech offensive line was moving bodies all over the field.

"The O-line did a tremendous job," Samson said. "We were able to run the ball really well today. I thought all of our running backs did a great job, but it starts up front. If you're going to be successful on offense, you need to have a great O-line."

Trevor Hoffman and Kiley Caprara each hauled in TD passes in the first half. Hoffman kicked off the scoring with a 34-yard reception and Caprara made it 14-0 with a 17-yard catch and run.

During the second half, after Folkes punched one in from a yard out, Kyle Torgerson caught a 3-yard touchdown to make it 31-0. Ryan Lowry's 47-yard field goal and the pick-six stretched the lead to 41-0. Lowry also made a 34-yard field goal to begin the scoring in the second half. He was 2-for-2 on the afternoon.