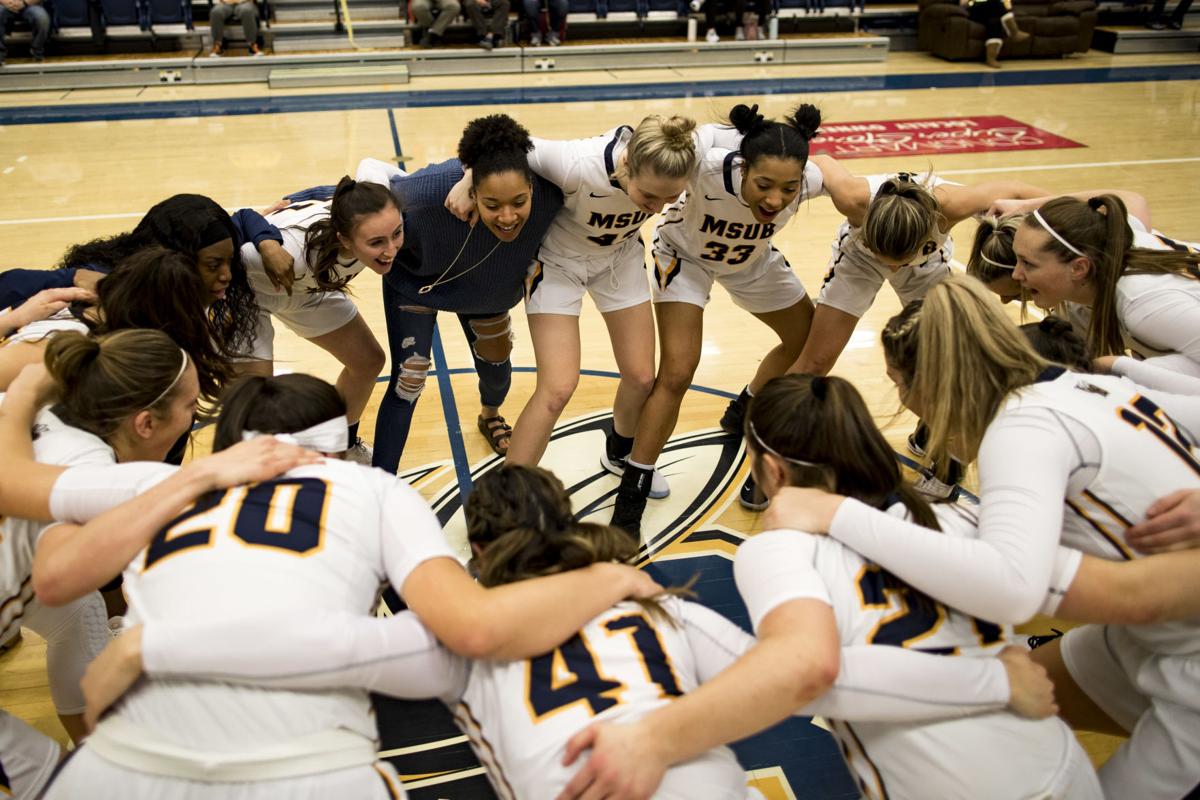 The Montana State Billings women's basketball team huddles before a game against Seattle Pacific at Alterowitz Gym on Jan. 23, 2020. 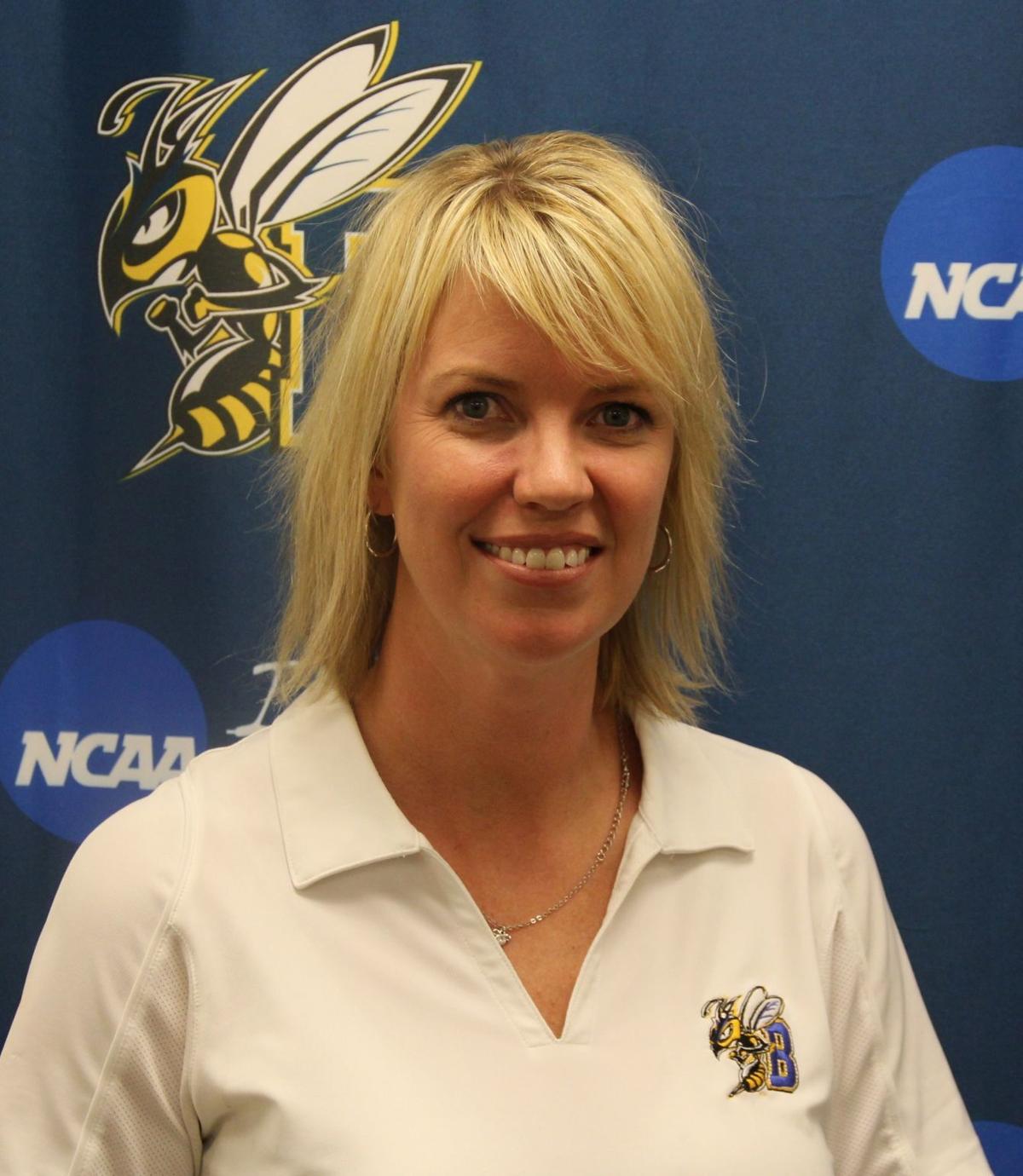 BILLINGS — Following a two-month break, student-athletes began trickling back to campus at Montana State Billings last weekend. For athletic director Krista Montague, the echoes from the scurry and bustle of practice at Alterowitz Gym and the physical education building are welcome sounds.

They also give Montague hope for what’s next, as the Yellowjackets begin to draw up strategies for the resumption of athletic events to make up for months of lost time caused by the ongoing COVID-19 crisis.

Bottom line: Sports are on the horizon at NCAA Division II MSUB for the first time since last March.

“I’m thinking, ‘Yes. Let’s go. This is great,’” Montague said. “I can’t wait for that day. This has been really hard on everybody.”

There aren’t concrete schedules in place yet, but Montague told The Billings Gazette and 406mtsports.com this week that she thinks MSUB’s men’s and women’s basketball teams could have games on the docket by the beginning of February. An announcement could come as early as next week.

The Yellowjackets opted out of any official Great Northwest Athletic Conference hoops competition in November, but they’ve had the autonomy to schedule non-league events since Jan. 10. Montague said men’s coach Mick Durham and women’s coach Kevin Woodin are currently working to secure opponents.

“We’re going to play some games in basketball and soccer and volleyball,” Montague said. “We’ve got our (virus) testing figured out so we can follow the NCAA testing guidelines. So yeah, things are looking good even though it’s not a formal conference season. It’s looking like our fall and winter sports are going to have some games this spring.”

Montague said she doesn’t yet know if any spectators will be allowed for home events.

And she admits that scheduling will be an even bigger challenge than it normally is.

“It’s tough, because the teams we could play, like the Frontier Conference and Big Sky, are already playing their conference seasons,” Montague said. “So it might come down to somebody having a cancellation and we can play, or them being willing to play us early in the week, like on a Monday or something. I’m thinking hopefully by that first part of February we’ll know more.”

The GNAC announced last week that it would not sanction conference games for the return of fall sports this spring, but MSUB had already made that decision itself when it opted out for basketball.

As for the Jackets’ postponed sports from the fall — particularly volleyball and men’s and women’s soccer — Montague said they, too, have scheduling opportunities. The soccer teams are likely to wait until later in the spring while volleyball might look to play against Division I Montana State and other schools close to home.

Triathlon, also a fall sport, could schedule at least one spring event, Montague said. Cross country isn’t likely to resume, the AD said, because most of those athletes also compete in track and field, which plans to go forward with its regular outdoor season in the spring.

For the resumption of postponed sports, Montague said MSUB has placed a 500-mile travel limit on its teams.

In addition to track and field, Montague said the Yellowjackets’ other traditional spring sports, which consist of baseball, softball and men’s and women’s golf, should be able to compete in normal (albeit reduced) and on-time schedules without travel restrictions.

MSUB’s spring teams had their seasons canceled outright last year when the coronavirus outbreak took hold in the U.S.

Another factor that is allowing for the reintroduction of sports is that MSUB now has a COVID-19 testing protocol in place on campus, which is something that eluded the athletic department in the fall.

“For us, (testing) just wasn’t readily available in the fall,” Montague said. “Had we been in a different situation with our conference … the travel was going to be hard without having testing fully in place. But now we’re ready to go and we have people on campus helping us, but it just took time to get all that set up.”

Montague’s tone was more somber in November when she and the university's chancellor at the time, Dr. Rolf Groseth, made the announcement during an online streaming press conference that the Yellowjackets wouldn’t compete in a GNAC basketball season.

The league eventually made a similar, all-encompassing decision roughly five weeks later, as eight of its 10 member institutions decided not to participate in a formal schedule.

Montague is much more upbeat now, and said she doesn’t regret the course MSUB took.

“I think it’s been really hard, obviously. But you try to do the best you can and take care of your coaches and your student-athletes,” she said. “They like structure, and you rip that away from them and it’s difficult.

“I do think — and people might disagree with me on this — that there was a point before the holidays where trying to plan to play was just getting more stressful than saying, you know what, let’s take a pause, let everybody go home for the break and try again when they get back for the spring. That was a little bit peaceful in a way.

“We are aware that some schools are playing games, but we’ve also watched how they’ve had to cancel the day of a game or the week of a game. I think we made the right decisions. I think it gave us time to get this right and get our policies and procedures right. Especially with the testing. Now that we have that part it should do its job. That should really help.”

Teams will not play official conference seasons this spring.