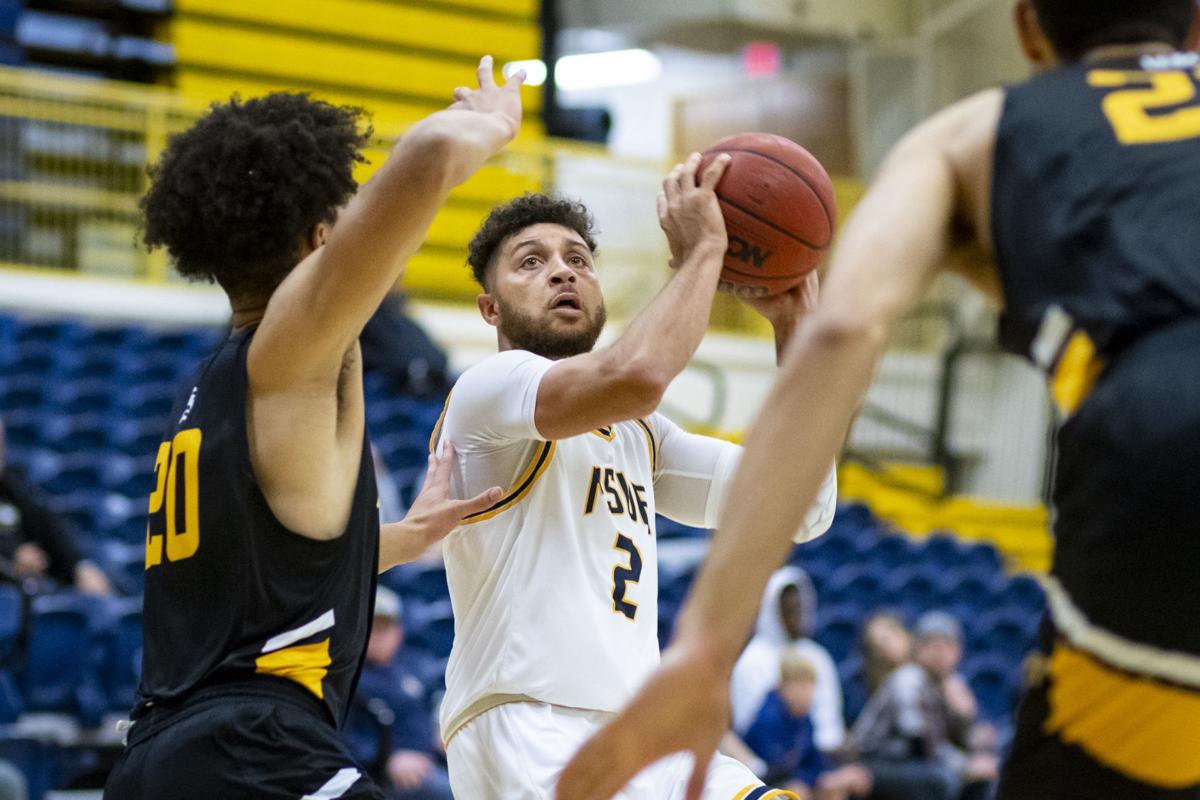 MSU Billings' Damen Thacker, a transfer from Idaho, looks to shoot during a game against Black Hills State at Alterowitz Gymnasium on Wednesday. MSUB won, 81-69. 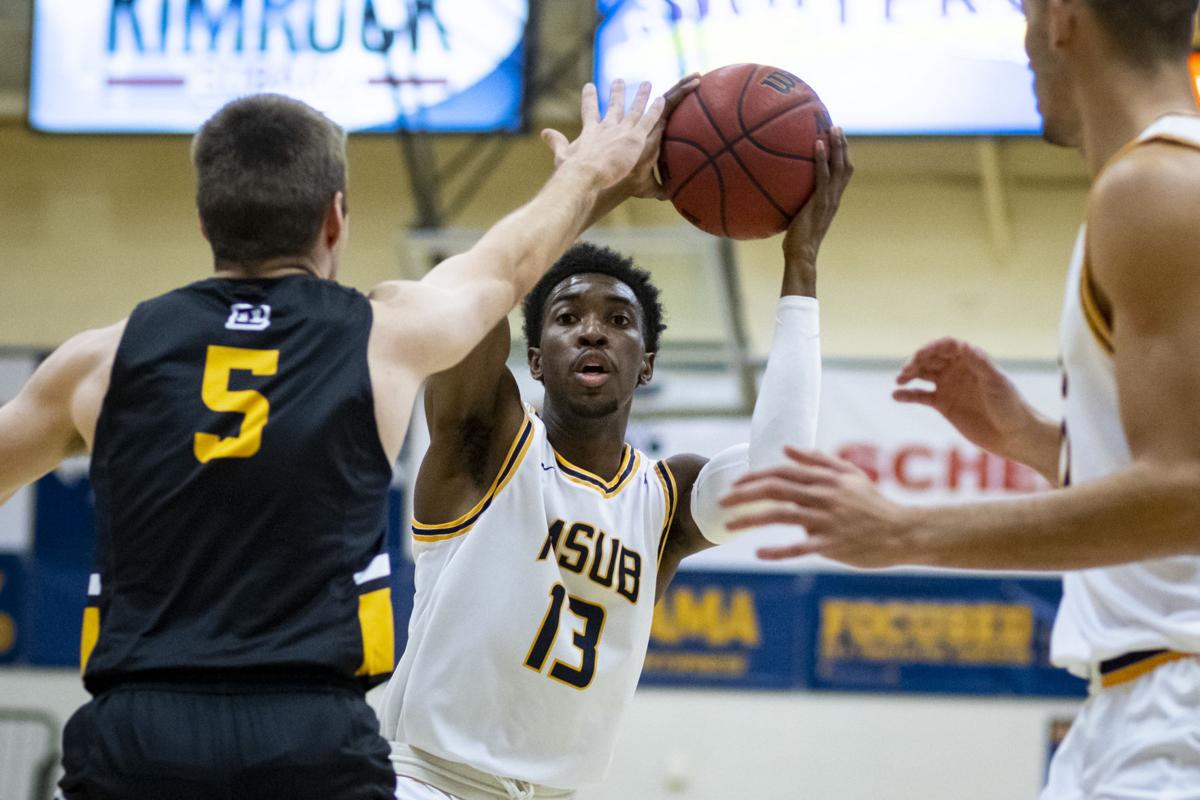 MSU Billings' Damen Thacker, a transfer from Idaho, looks to shoot during a game against Black Hills State at Alterowitz Gymnasium on Wednesday. MSUB won, 81-69.

BILLINGS — One after another, the body blows became more difficult for coach Mick Durham and the Montana State Billings men’s basketball program to absorb. Yet the Yellowjackets are forging a new path forward.

MSUB, looking much different than it has in the past couple years, played the fifth game of its 2021-22 season Wednesday at Alterowitz Gymnasium when it hosted Division II counterpart Black Hills State of the Rocky Mountain Athletic Conference. And it was the Jackets' most complete performance to date: an 81-69 victory.

Newcomer Damen Thacker, an Idaho transfer, showcased his ability as a floor general with nine points and seven assists, and backcourt mate Carrington Wiggins, a holdover from last year, had 19 points, six rebounds and four assists in 37 minutes.

MSUB led most of the way, building as much as a 20-point advantage in the second half.

After last season was canceled because of the pandemic and the subsequent defections of key personnel via the NCAA’s contentious yet trendy transfer portal, Durham and MSUB are finally back at it — albeit still putting the pieces together with several new faces.

“Now that we’ve started we’re all getting back into a routine,” Durham said. “The COVID year was something we had to deal with. Everyone did. I think the frustrating part was that a lot of schools played and a lot of schools didn’t, and we happened to be one that didn’t.

Here’s a rundown of the upheaval:

Last November, it was announced that MSUB would opt out of Great Northwest Athletic Conference competition, a result of coronavirus concerns. The Yellowjackets did win two exhibition games in February, but the remainder of their independently scheduled “season” was wiped out after a positive COVID-19 case was identified within the program.

Just like that, two in-state cornerstones were gone. Durham and MSUB, with only two games under their belts in a 14-month span, were left scrambling.

“I don’t think there’s any question it’s tough losing maybe the base of your program, and especially two Montana guys,” Durham said. “Brendan had the experience factor of having played two GNAC seasons. And Chrishon was a point guard that we were developing, but he was obviously getting a huge opportunity here.”

To boot, forward Clarence Daniels transferred to Lake Region State, a junior college in North Dakota, and forward Zharon Richmond, a Billings Skyview grad and a key component during the 2019-20 season, is also gone.

Howard, a two-time Montana high school Gatorade player of the year, seemed destined to rewrite MSUB’s career scoring record. He had scored more than 1,000 points and transferred with two years of eligibility remaining.

Dixon, meanwhile, had seemingly been given the keys to the team. He averaged 34.5 minutes in those two exhibition wins last February, was filling into his body and looking every bit the part of an effective D-II point guard.

One major addition this year is Thacker, who has relocated to MSUB after graduating from D-I Idaho. Thacker came to the Yellowjackets with high expectations — without even playing a game in the GNAC, he was named to the preseason all-conference team.

Thacker, meanwhile, is comfortable in his new environs.

“There’s guys coming in and out of programs all the time. But with that COVID year, that transfer portal was insane,” said Thacker, who was attracted to MSUB because of its fast-paced style. “There were so many guys that went in there looking for a new spot.

“Being an older guy I’m looking to push the pace. We have some young guys that haven’t gotten to play. They didn’t get to play last year, and I was fortunate enough to play a full season. I just want to play my game and push the pace and be an example to the younger guys.”

Thacker and Wiggins have been MSUB’s most consistent duo so far, and could be worth the price of admission on their own. Wiggins entered Wednesday leading the team in scoring at 15.3 points per game. Thacker was averaging 14.7 points, 5.7 rebounds and 2.7 assists.

Both show the ability to bring the ball up the court and break a press, and can shoot and score or dish off the dribble-drive.

Emmanuel Ajanaku, a 6-10 freshman holdover from last year, is essentially in his first season but could prove to be a solid rim protector; and 6-9 Jimmy Brown, also returning from last year’s team, is in his first full D-I season.

Another player of note is 6-5 wing Nicholas Sebastiao, who came into Wednesday averaging 25.3 minutes per game in his first full collegiate campaign. He had 12 points against Black Hills.

MSUB was picked to finish last in the 10-team GNAC. But the Jackets’ stated goal is to finish in the top six and qualify for the league’s postseason tournament.

“We’re pretty athletic, we’ve got some good size. We haven’t been shooting the ball great yet, which I think will come, but I think we’re going to be a really solid defensive team,” Durham said. “It’s exciting to be back, but it’s weird to be back. Obviously no one had ever been through a year off, so it seems like we’re starting from square one.

“We obviously didn’t get much respect in the poll, and I knew losing Brendan that was going to be the case. But we have a little motivation to see what we can do in the GNAC.”

The Yellowjackets host South Dakota Mines on Saturday at 7 p.m.