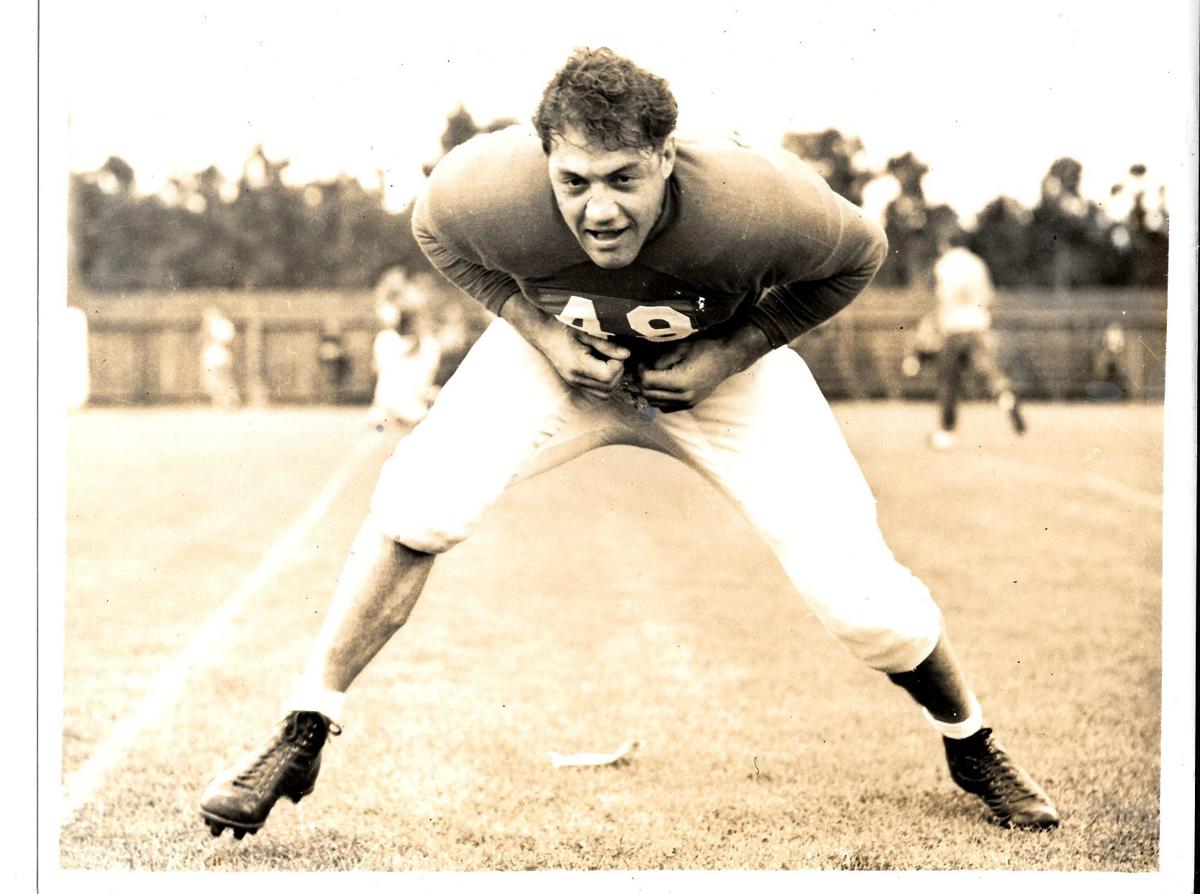 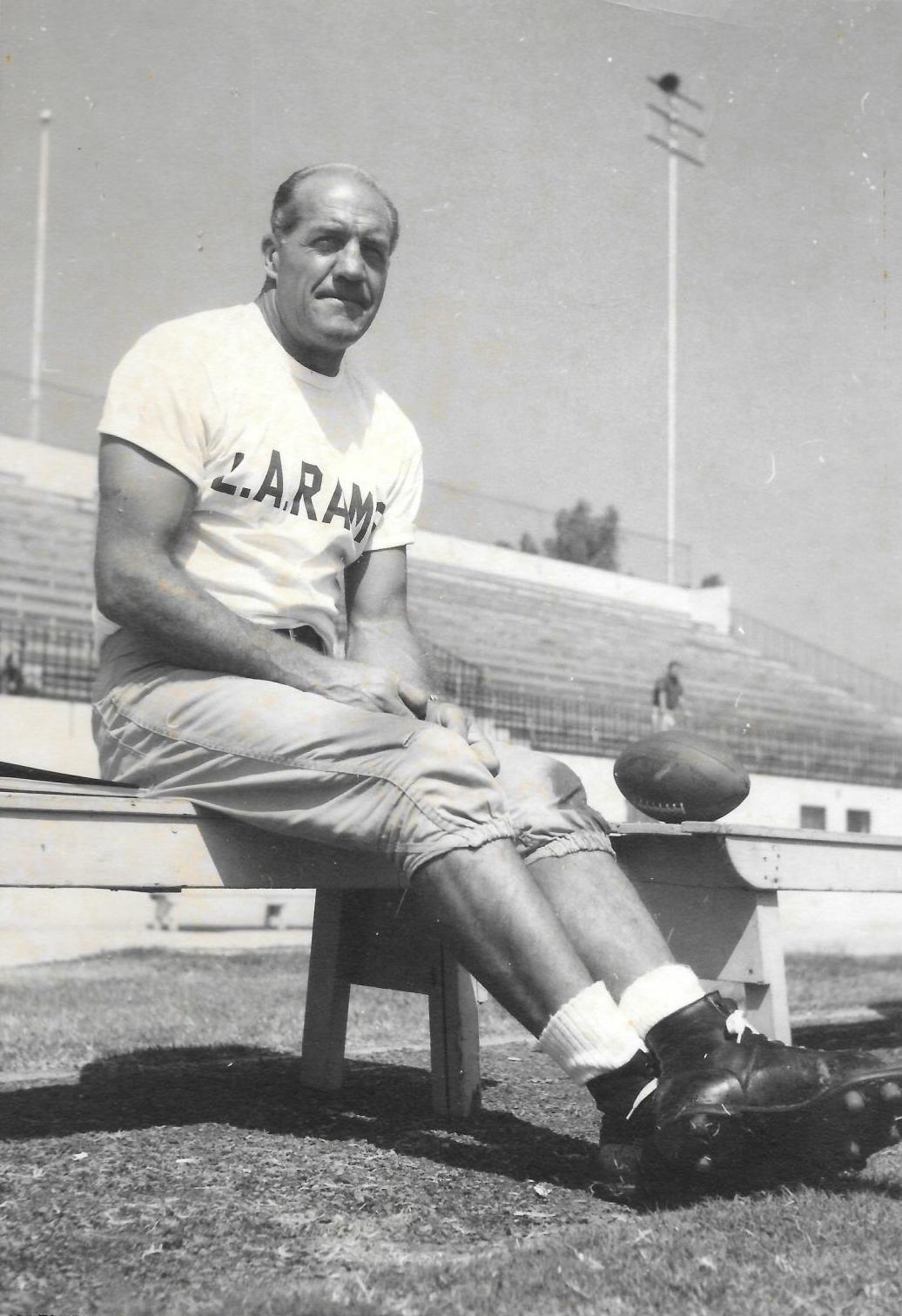 Vic Lindskog was an NFL scout for many years after he retired from the NFL.

Vic Lindskog was an NFL scout for many years after he retired from the NFL.

Editor's note: The Montana Football Hall of Fame will induct nine members on March 28 in Billings. The Hall is sharing its profiles of each member with 406mtsports.com.

BOZEMAN — The 1940s marked the last decade of the “sixty-minute men” era, where the players, as described eloquently in the book 75 Seasons, “played on offense, gulped a breath or two and a dipper of water, and switched to defense. Then back to offense. Then to kicking off. Then to receiving.”

As a rugged center and linebacker, Roundup native Vic Lindskog played on the Philadelphia Eagles during their glory days, when the high-flying Eagles won NFL championships in 1948 and 1949. Till this day, he is considered by many as one of the all-time greats in franchise history at center.

Hilding and Ellen Lindskog welcomed the birth of their first-born child, Victor J. on Dec. 3, 1914. As the son of a Swedish immigrant, Lindskog grew-up in the small community on the Musselshell River. He attended Roundup High School, where he was active in basketball, tennis and track. After graduating in 1932, he worked in the local coal mines before moving to Cut Bank a year later to work in the oil fields.

It was there that he met and married Doris Fee.

Lindskog became involved in boxing at the Cut Bank Elks Athletic Club under the guidance of local trainer and promoter William Hunter Sr. in 1937. He showed a promising future as an up-and-coming fighter. As a result, a prominent businessman sponsored the young fighter to train under boxing guru George V. Blake in Los Angeles.

Lindskog fought throughout California for a year with some success as Blake’s protégé, but his boxing career and professional aspirations were short-lived. His last known fight was June 13, 1938, at the California State Amateur Championship, where he lost to defending state heavyweight champion Bill Radunich in the title bout.

In an era where the alumni did majority of the recruiting for their former colleges, Lindskog’s athletic attributes caught the eye of Ralph “Uncle Jim” Reynolds, a successful businessman in Pasadena. The captain of the 1909 Stanford team had become a prominent recruiter in Southern California for his alma mater, and he encouraged Lindskog to attend Stanford to play football.

Before going to The Farm, Lindskog attended Santa Ana Junior College to build his academic career. Having never played organized football, the rangy 6-foot-1, 185-pounder tried-out for the Dons football team. He soon became the starting blocking back for two seasons and was voted “most improved player” in 1938.

In April 1940, Lindskog, married and with a son on the way, joined 90 other prospect football players on the practice field for spring drills in Palo Alto. The 25-year-old had his sights on playing in the backfield, but Stanford’s new head coach, Clark Shaughnessy, had different plans.

Shaughnessy was implementing the 'T' formation, a shelved offensive scheme by college coaches for decades. But unlike the original, he crafted an innovative spread offense that relied on speed, finesse and deception. Big blocking backs were not required and Shaughnessy tried the former halfback at tight end, and then tackle, before placing him at center.

Lindskog was not thrilled, prompting Shaughnessy to ask, “Which would you rather be, a mediocre halfback, or a great center?”

Shaughnessy and his tea leaves proved to be right, as Lindskog climbed the depth chart from fifth string to starter by the end of fall camp. He maintained it for two seasons while gaining All-American recognition both years.

Shaughnessy’s 'T' formation was considered complex, and the transition wasn’t instant. The offensive line was taught brush blocking for long gains to materialize as opposed to holding their blocks that were required in the single and double wing formations. As the pivot in the line, Lindskog was required to keep his head up while snapping to the quarterback, which enabled him to be ready to block.

The technique proved to be challenging as Shaughnessy hadn’t worked out the mechanics for the center to make the direct snap to the quarterback.

“It was a ticklish process at first,” Lindskog recalled in a 1990 Los Angeles Times article, “It wasn’t easy to keep from fumbling.”

On the receiving end of those snaps was Frankie Albert, who played tailback the previous year for a Stanford Indians team (as they were known then) that had won only one game. He proved to be a gifted general with superb ball handling skills, a master of deception and an accurate passer to run the offense. In the backfield with Albert were Peter Kmetovic, Norm Standlee and Hugh Gallarneau, all future NFL players.

The innovative 'T' formation was unveiled against San Francisco on Sept. 28, 1940, when the Indians shocked the Dons 27-0. Stanford went undefeated in nine games, won the Pacific Coast Conference title and earned the school’s seventh trip to the Rose Bowl.

The Philadelphia Eagles, a T-formation club, drafted two Stanford players in the first two rounds, halfback Kmetovic in the first and Lindskog in the second. Lindskog, the 13th overall pick, would not report to the Eagles until 1944. He chose to stay at Stanford in the physical education department to support his Doris and young son Stan.

According to Stan, who followed in his father’s footsteps and played at Stanford (1960-62), it took Philadelphia three years to finally make an offer that paid more than what his dad was making at Stanford.

During that period, he remained in sports as a line coach for the football team in 1942 before the school dropped football (1943-1945) because of World War II. Lindskog’s passion for boxing never wavered; he coached boxing at Stanford and in early 1943 sparred with former heavyweight champion Max Baer in an exhibition bout.

Years later, Frank O’Gara of the Philadelphia Inquirer wrote that Lindskog hit Baer so often it infuriated the German. The former champ then asked for another round, in which “he caught Vic with a murderous hook on the head that produced its quota of stars—and cost Max a broken knuckle. But Max also collected a split lip to accompany a gory nose and sundry facial contusions.”

Lindskog played on the college all-star squad in a charity game against his future employer, the Eagles, and the following summer against the Washington Redskins.

In the fall of 1944, Lindskog stepped on the Eagles practice field as a 29-year-old rookie. He played center/linebacker and cracked the starting lineup by the eighth game that season against the Chicago Bears. In his second start, against the Brooklyn Tigers, Lindskog celebrated his 30th birthday by making his first NFL interception and went 65 yards for the score.

In 1947, Lindskog was operated solely as a center and helped the Eagles reach their first NFL championship game. The following year, the Eagles shut out the Chicago Cardinals 7-0 to capture their first title.

Lindskog played his final season in 1951 and for the first time in his career the 36-year-old was voted to the all-pro team. Lindskog getting the honor only once during his eight-year career did not sit well with Coach Greasy Neale, according to The Eagles Encyclopedia.

"Vic is the greatest offensive center ever to play pro football," Neale said. "He’s the only center I’ve seen who can block the halfback out of bounds on an end run. This is unusual that I can count how many times I’ve seen it performed. Five—and all by Vic.”

After he retired, Lindskog remained with the Eagles as an assistant coach until 1954. He took his coaching whistle northwest across the border and landed with the British Columbia Lions of the Canadian Football League, where he was an assistant from 1955-58.

In the spring of 1959, he became an assistant coach in track and football at Bakersfield Junior College in California. The Renegades went undefeated that fall and captured the 1959 Junior Rose Bowl championship.

He returned to the NFL ranks in 1960 with the Los Angeles Rams as the offensive line coach for three seasons.

Victor and Doris settled in Arlington, Texas, and celebrated nearly 53 years of marriage before her passing in 1991. Lindskog remarried in 1993 to Francis Rattn and the couple settled in Bedford, Texas, until his passing on Feb. 28, 2003. He was 88.

Brent Musburger has had a Hall of Fame broadcasting career, and the Billings product is adding one more plaque to his resume in March.