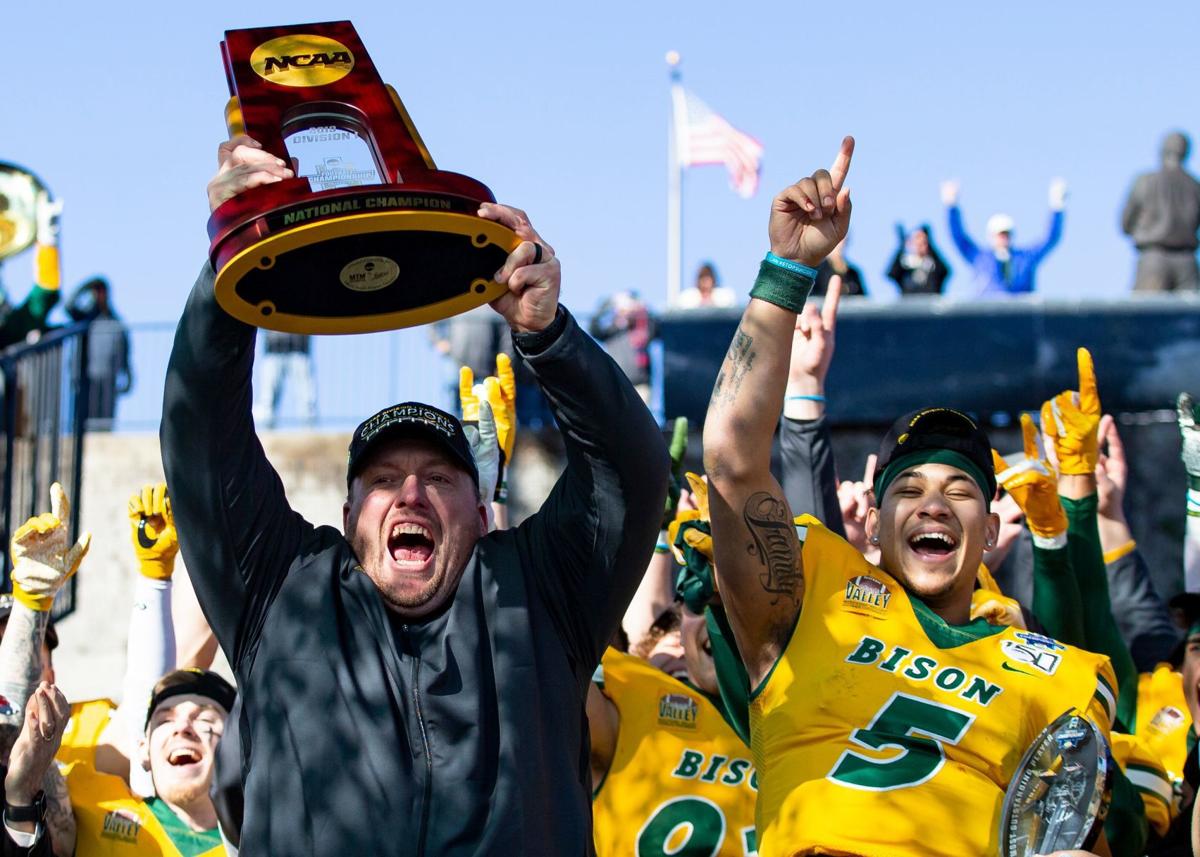 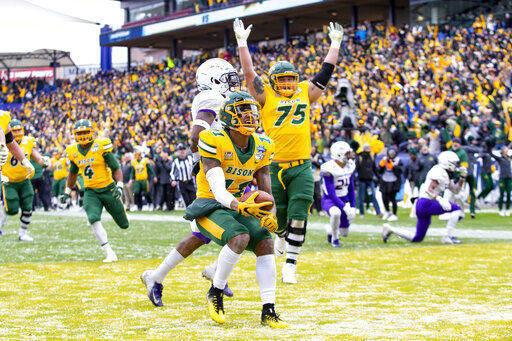 North Dakota State wide receiver Phoenix Sproles (11) celebrates after scoring a touchdown during the first half of the FCS championship game against James Madison on Saturday in Frisco, Texas.

North Dakota State wide receiver Phoenix Sproles (11) celebrates after scoring a touchdown during the first half of the FCS championship game against James Madison on Saturday in Frisco, Texas.

FRISCO, Texas — Now this was a perfect ending for North Dakota State, with its redshirt freshman quarterback and a senior safety in his final game after first wanting to be a Bison quarterback.

Trey Lance ran for 166 yards, with a clutch 44-yard touchdown in the fourth quarter, and James Hendricks had a game-clinching interception after an earlier TD run on a fake field goal as the Bison beat James Madison 28-20 on Saturday for their eighth FCS national championship, and the first 16-win season in any division since Yale in 1894.

“To go out on top as a senior is an incredible feeling,” said Hendricks, who was a third-string quarterback before moving to defense as a sophomore in 2017. "That's what I'll remember. ... I just feel so fortunate.

The Bison (16-0) stretched their FCS-record winning streak to 37 in a row while winning their record eighth championship in the division — all in the past nine seasons. They also won five NCAA Division II titles from 1983-90.

After stopping Lance short on a fourth-and-2 at its 36 with 2:51 left, James Madison (14-2) drove to the 3 before Hendricks picked off the pass by Ben DiNucci at the goal line.

Hendricks said it was a play the Bison expected so, "I just left my guy and knew that they were going to throw it, and trusted that he was going to throw to the flat, and not the guy that I'm supposed to cover.”

When asked how common that was, Matt Entz, the first-year Bison head coach who was their defensive coordinator the previous five seasons, smiled and said, “I'm glad he did in that situation."

Lance's 44-yard scramble TD came on a third-and-23 play to open the fourth quarter and put the Bison up 28-13. He dropped back to pass, found no one open and when “the Red Sea just kind of parted” took off running to the end zone.

"He's very dynamic. For him to be that young, that calm in the pocket is pretty crazy,” All-America defensive end Ron'Dell Carter said.

And that really wasn't even Lance's highlight run.

On the final play of the first quarter, Hall scrambled and ran right into middle linebacker Landan Word, who tried to yank him down before Lance suddenly popped up and lunged forward several more yards with the help of his lineman in what looked more like a rugby scrum.

Riley Stapleton's 5-yard TD catch with 7 minutes left was his second of the game. He also had two TD catches in the national title game two years ago for the Dukes in another loss to North Dakota State. That was a season after they won a semifinal game at the Fargodome and then beat Youngstown State for the title.

While Lance was only 6 of 10 passing for 72 yards, he has now attempted 289 passes for the Bison without ever throwing an interception. He ran a season-high 30 times in the finale.

Before Hendricks' 20-yard TD run after lining up as the holder for a field goal gave NDSU a 21-10 halftime lead, North Dakota State also scored in the second quarter when receiver Phoenix Sproles swept around and faked a reverse handoff on way to a 38-yard touchdown run.

“Honestly, I don't really think they won that game. Honestly, I think we lost it,” said DiNucci, who finished 22-of-33 passing for 204 yards. “Trick plays, they'll probably tell you we out-physicaled them."

The Dukes, with first-year coach Curt Cignetti, got off to an impressive start, going 86 yards on 17 plays and taking half of the first quarter for their opening drive. Stapleton's 5-yard TD catch gave them their only lead before NDSU also scored on its first possession.

Make it 8 for 8 for the Bison for championships won when making it from Fargo to Frisco. Their eighth appearance in the FCS championship matched the most with Georgia Southern, which won six of their title games.