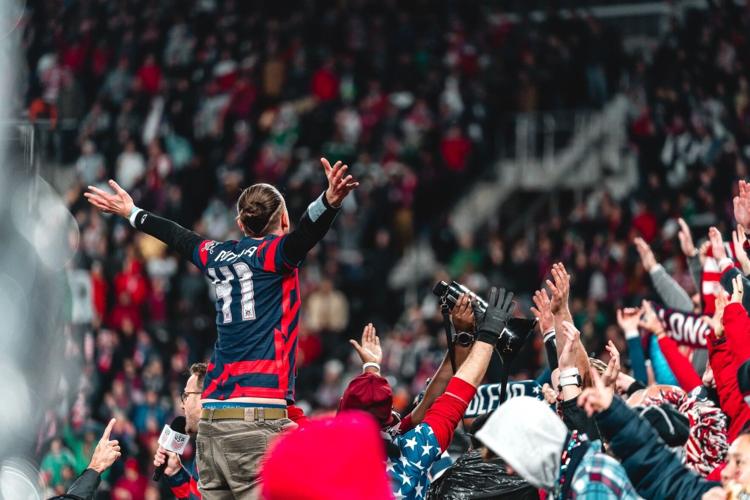 Max Croes of Helena is pictured leading cheers for the American Outlaws, a group of United States' soccer fans at a match in Cincinnati in 2021. 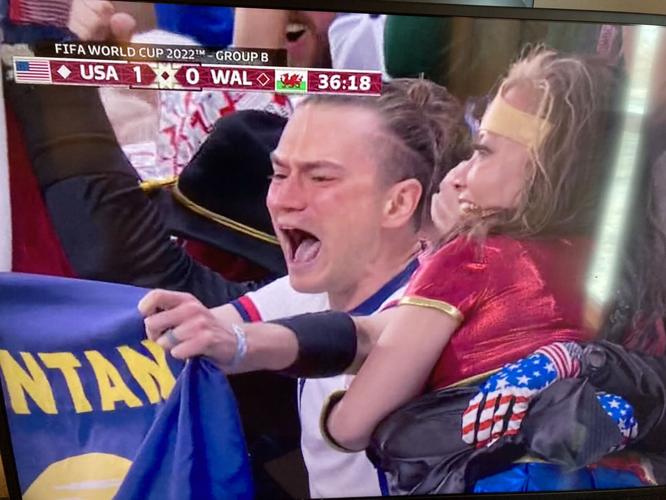 Max Croes is shown on TV during the United States World Cup Soccer Match against Wales earlier this week in Qatar. 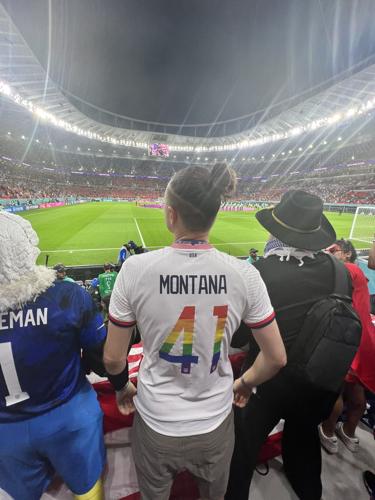 Max Croes of Helena wearing his No. 41 Montana Jersey with rainbow-colored numbers even though pride stuff is banned in Qatar for the World Cup. 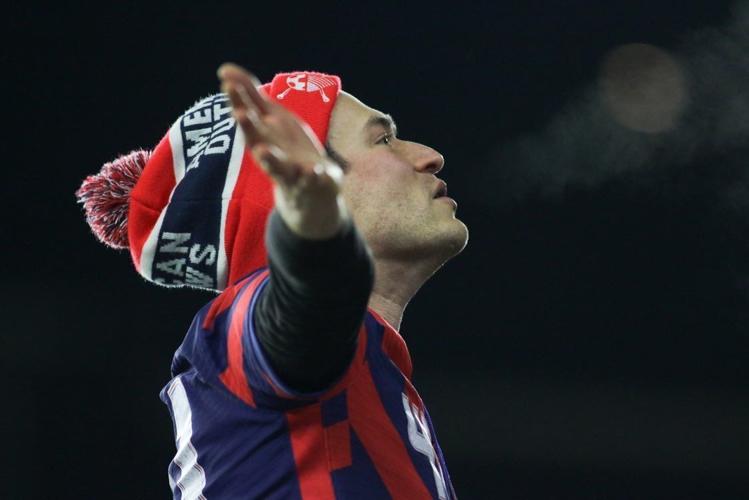 Max Croes of Helena is shown leading the American Outlaws in a cheer at a soccer match in Cincinnati against Mexico.

No, you didn't imagine seeing a Montana flag during the first match of the 2022 World Cup for the United States Men's Soccer team.

As the Americans scored their first goal of the tournament, the television cameras spanned the crowd and just so happened to catch sight of Helena's Max Croes, who was celebrating with the Montana flag.

It wasn't the first time Croes, an American soccer super fan, has been caught on TV by cameras and with his dedication to the USMNT/USWNT, as well as the sport, it probably won't be the last.

"Crazy would be an understatement," Croes said of seeing himself on TV at the World Cup. "I go to a lot of games and I have about eight jerseys that say Montana with No. 41 on the back. I love wearing that. It represents where I live and it's a great way to start conversations with other people. I always try to bring the flag with me and I've been lucky enough that it has shown up in a couple of places over the years. But for it to show up at the World Cup, it's an outer-worldly experience."

It was a joyous moment for United States soccer fans and one that seemed to release years of pain. The USMNT didn't qualify for the last World Cup, meaning it was the first World Cup goal for the Americans in eight years.

That's what made it so special and the look on Croes' face was that of pure, unadulterated joy.

"It's really lucky to see a sporting moment like that for a team that you really love and are trying to support," he said. "To have your reaction to that moment captured is a priceless thing."

It's part of a journey that Croes has taken the past 15 years or so as he has religiously followed US Soccer.

"My dad calls it my Grateful Dead," he said. "That's probably what I would compare it to. I have friends that don't even invite me to their houses anymore, they probably just figure I'm gone and to be fair, the USNMT has had upwards of 20 matches in the last year and I've been at about 80 percent of them."

And Croes isn't just a spectator. He's a key part of the American Outlaws.

If you haven't heard of the group, they are ardent supporters that follow the men's and women's national soccer teams. The organization is a non-profit, has over 30,000 members and hundreds of local chapters across the country.

They attend games, have tailgates and come together to support US Soccer. In the stadium, this means chanting and cheering together.

"One of the things I have gotten the honor of doing in a lot games is being capo," Croes said. "You are basically, a band leader and you are leading people in songs and cheers. It's a real honor and I've gotten the opportunity to do that for a number of the USA-Mexico games, including the latest 'Dos A Cero' game and I was on ESPN in my Montana 41 jersey chanting 'Dos A Cero' with the entire crowd in Cincinnati."

That win helped the United States get back to the World Cup, but for Croes, it was an earlier trip to the 2010 World Cup that got him hooked on the USMNT.

Especially since he was there for quite possibly the most famous goal in the history of US Soccer.

"I went to he World Cup in 2010 and was there for Landon Donovan's goal against Algeria, in the closing minutes of the game," he said. "I can't express what a euphoria that was and that probably put me on the path of wanting to chase that feeling ever since then."

Croes, who grew up in Texas, got his first introduction to the World Cup when the United States hosted in 1994. After that his love for the sport grew, as did his devotion to US Soccer.

"It's like a college football sort of dedication," he said. "And it just has a special culture around it. I think I discovered that back in 2007."

Since then, Croes, a political consultant in Helena, estimates that he's been to approximately 75-80 US Soccer matches and when he's not in attendance, he works to put together watch parties like the one that will be held Friday (12 p.m.) at The Windbag in Helena for the match against England, even though he won't be there.

"I wanted to be there when the US played in a World Cup," he said. "Especially after they failed to qualify in 2018."

Croes got his wish as the USMNT qualified for the trip to Qatar, although with the controversies surrounding the treatment of migrant workers, women and LGBTQ+, it made the decision to attend much harder.

However, it didn't stop him from wearing his rainbow-colored No. 41 Montana jersey to show his support, even if he had to wear a jacket over it, due to Qatar's ban of pride, to actually get into the opening match against Wales.

"There was a lot of places that were allowing it and a lot that weren't," he said. "But I was wearing that pride jersey for sure. It's no act of a hero or anything but I wanted to make sure I could make my statement."

As far as the rest of the World Cup, Croes said he plans to stay in Qatar as long as the Americans are playing. Following a 1-1 draw against Wales, the Americans will play England on Friday and Iran next week. They are tied with Wales for second place in the group but need to finish in the top two to advance to the knockout stage (Round of 16).

"It was tough, because it felt like (USMNT) was going to win the game," he said of the Wales match. "But I'm upbeat because it looked like we belonged on the world stage. We'll find out how many points we need to qualify on Friday but it's never over until it's over."

"Drawing against England would be great," he added. "Beating them in a World Cup would be even better and that's the kind of experience — I want to be there for it. And my plan is to be here until they lose. Hopefully, it's a long stay."

Whether it's Friday against England, next Tuesday against Iran, or beyond, keep an eye out for Croes, his No. 41 and his Montana flag because if the USMNT is on the field, more likely than not, Croes is be somewhere close by — cheering, supporting, and doing whatever he can to advance the cause of US Soccer.

"Whether it's being there to cheer them on or support them, we feel like it makes a difference," he said. "Others might not believe that but that's what the fan in me believes."

He's certainly not alone in his belief and as far as his most memorable moment, outside of being there to see Donovan's goal, his answer was simply the growth of the game.

"I want people to be more passionate about US soccer," he said. "Just seeing the sport continue to grow and become a thing is exciting for me. I can recall going to US Soccer games 13 years ago and there was only a couple thousand Americans there. Then in the World Cup qualifying this cycle, stadiums across the country sold out for all of those games. So just seeing that growth brings a tear to my eye, on some days, and it's what I enjoy and appreciate the most."

Although he hopes one day to see the United States Men's National Team win the World Cup, if by some miracle it happens in Qatar, you can bet you'll see that Montana flag flying, along with that No. 41 jersey which has become so familiar to American Outlaws everywhere.

Helenans gathered at watering holes across town to cheer on the United States Men's National Team during its FIFA World Cup win over Iran Tuesday afternoon.