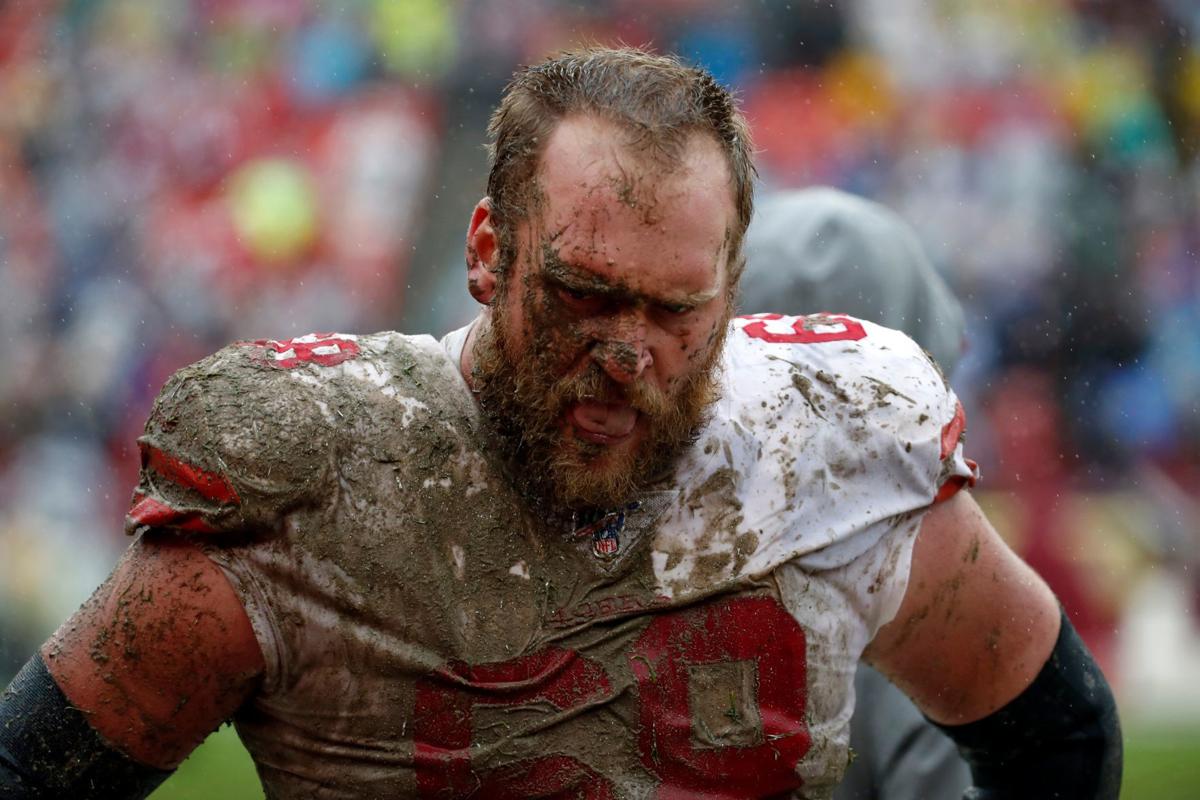 Glendive native and ex-Montana State Bobcats standout Mike Person is caked in mud during the second half of a game between the 49ers and Redskins on Oct. 20. 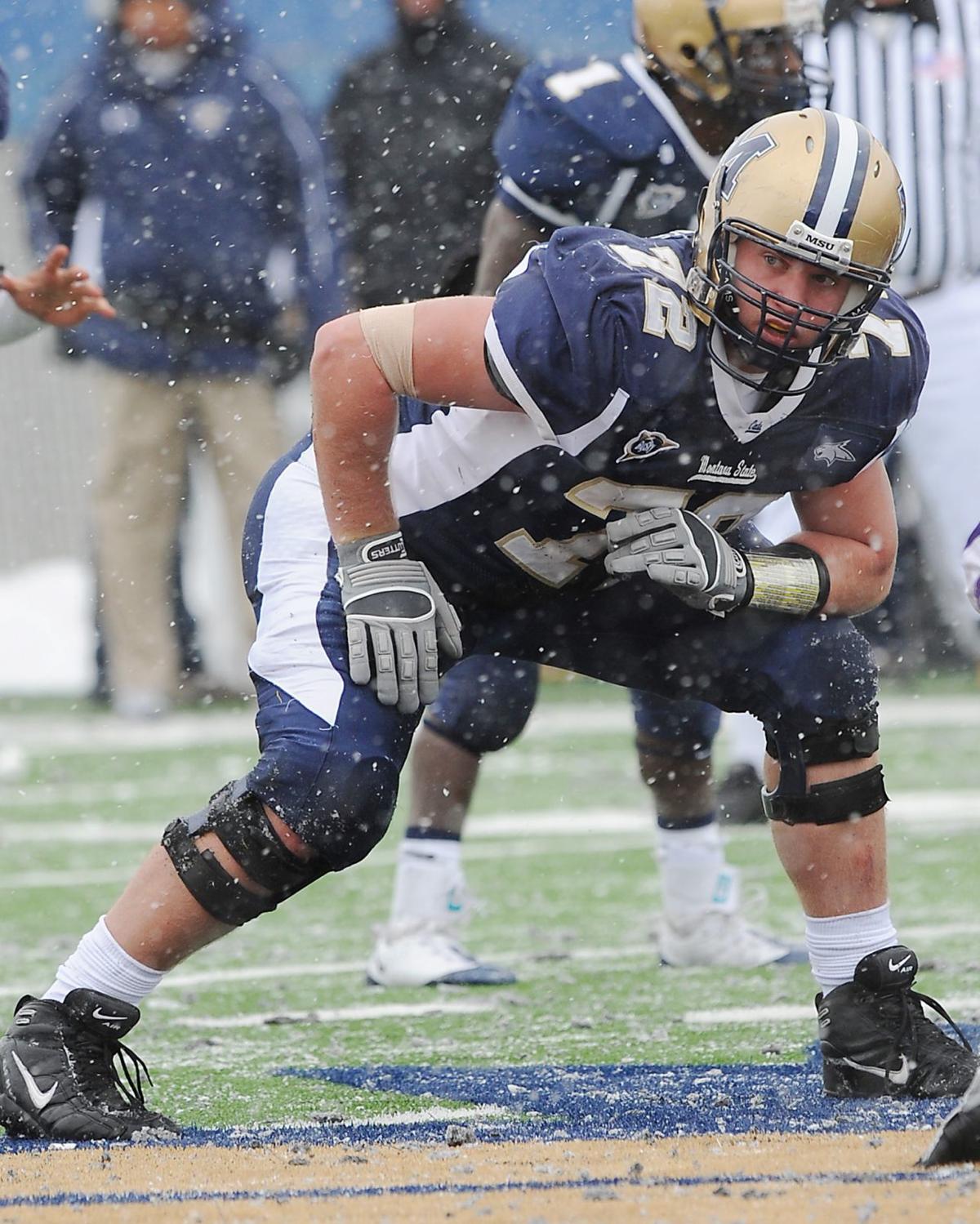 Mike Person lines up at right tackle during a game between Montana State and Weber State in Bozeman in 2008. 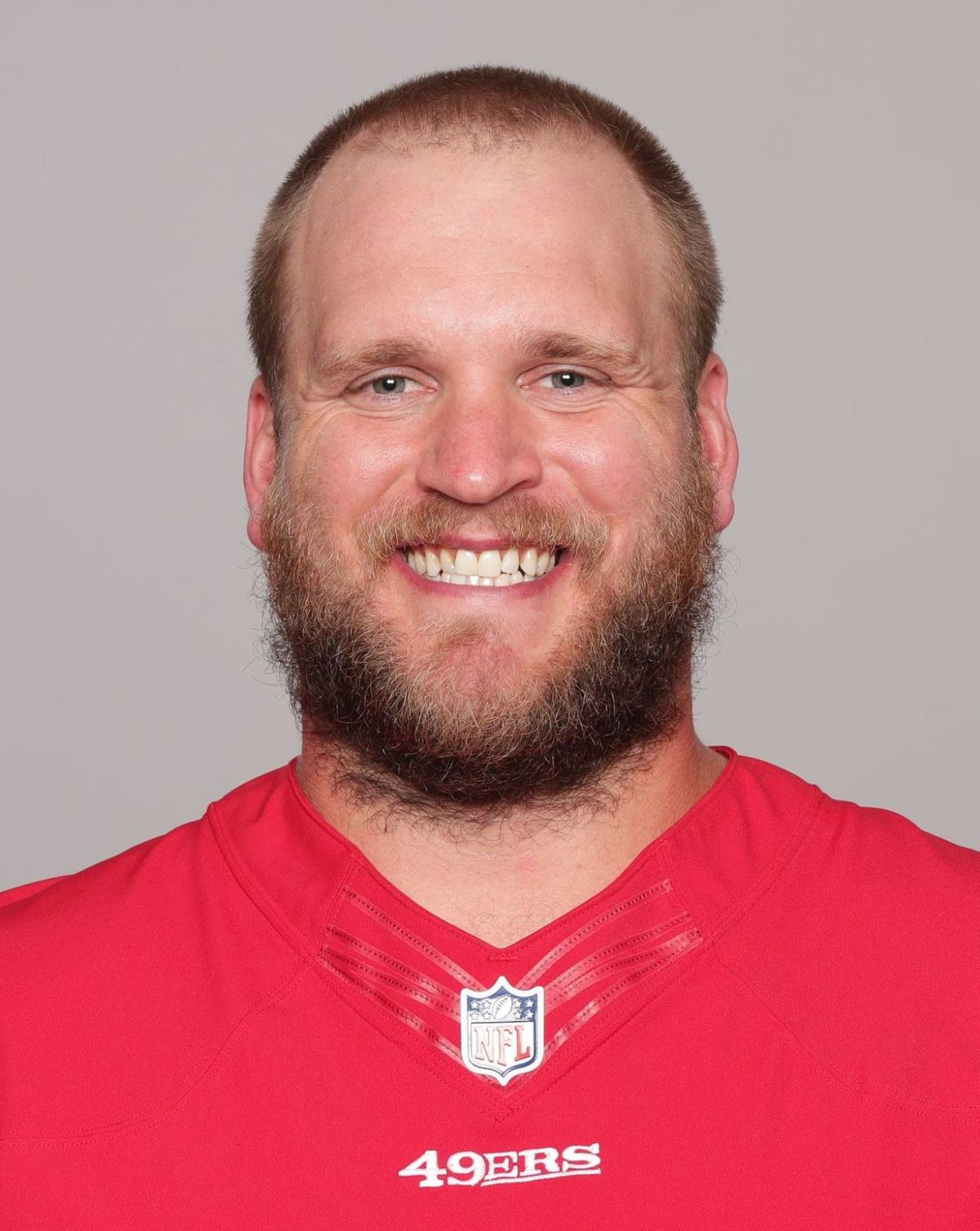 Glendive native and ex-Montana State Bobcats standout Mike Person is caked in mud during the second half of a game between the 49ers and Redskins on Oct. 20.

Mike Person lines up at right tackle during a game between Montana State and Weber State in Bozeman in 2008.

BILLINGS — Pieces of wet soil were smeared all over the front of Mike Person’s jersey. And on his beard. And his face. And his hair.

Person, the San Francisco 49ers’ starting right guard, had tried in vain to swipe the ball away from Redskins safety Troy Apke after Apke had intercepted Jimmy Garoppolo in the third quarter of a scoreless game in rain-soaked Washington, D.C., on Oct. 20.

Person chased Apke toward the boundary, vaulted forward, landed on the turf and slid head-first across the sloppy surface and into the 49ers bench like a kid on a Slip ’n Slide.

When he got up from his mud bath, the cameras captured Person in all his filthy glory.

The San Francisco Chronicle wrote that Person “looked more like a 16th century marauder than a modern-day NFL player.”

“What a mess,” Person, 31, a Glendive native and a former standout offensive lineman at Montana State, recounted this week during a phone interview with 406mtsports.com.

“But those are the fun ones. They really are, because you feel like a 7 year-old out there running around with your friends.”

The photographs, captured by the Associated Press and other media outlets, are a microcosm of Person’s down-and-dirty NFL journey, which took another turn for the better this year as the 49ers won the NFC West division and clinched home-field advantage for the postseason.

The 49ers earned a first-round bye, and will host a divisional playoff game against a to-be-determined opponent at Levi’s Stadium in Santa Clara, California, on Jan. 11.

Person, in the first year of the three-year, $8.2 million contract extension he signed last March, started San Francisco’s first 14 games but missed the following two while nursing a sore neck. That included last week’s 26-21 win at Seattle, which clinched the top seed in the NFC for the 49ers.

Though he was available as a backup center, the 300-pound Person said it “killed” him to miss that Seahawks game. But he is expected to return to his starting spot for the playoffs after resting and recuperating.

“Mike is good to go,” coach Kyle Shanahan said in a 49ers press release. “He’s battled through all his stuff. I think these two weeks of him not having to get in these games have helped him a lot. The issues he has aren’t going to go away until after the season when he can take a couple months off.

“I think these two weeks have helped him. Getting another bye week will help him a ton and we’ll see how practice goes this week and next.”

“They have me wrapped up in bubble wrap and I’m ready to take it off,” Person said.

Until last season, when he latched back on with the 49ers, who drafted him in the seventh round in 2011, Person’s career had been that of a journeyman that included stints — some more productive than others — with the Colts, Chiefs, Falcons, Rams and Seahawks.

“To be able to turn it around to what we are and the opportunity that we have in front of us, it’s pretty cool,” said Person, a 2006 graduate of Dawson County High School in Glendive. “It’s such a great group of guys and everybody has bought into this thing 100%.”

A big part of the resurgence is a healthy Garoppolo, who missed much of last season but has returned to throw for 3,978 yards and 27 touchdowns. The 49ers also have the No. 2-ranked defense in the NFL.

Person helped the team produce the league’s No. 2 rushing offense in the regular season at 144.1 yards per game.

Person pointed to the 49ers’ 48-46 victory at New Orleans on Dec. 8 as a major highlight and a crucial moment in the season so far.

Drew Brews threw a late touchdown pass but Garoppolo led a last-ditch drive that resulted in a 30-yard field goal by Robbie Gould to win a thriller. Garoppolo hit tight end George Kittle for 39 yards on a fourth-and-2 play to help set up the winning kick.

“That game was something. An emotional roller coaster,” Person said. “It’s one of those things where we don’t care how we win as long as we win. The Washington game, the defense had to bail us out in that. We didn’t score a touchdown. So it doesn’t matter if we win 9-0 or 48-46.

“At the end of the day, getting a win in the NFL is a heck of a deal. That game in New Orleans, that place was rocking when they scored that last touchdown. And then George does his thing on that fourth-and-2 play. It was fun.”

One playoff scenario that might intrigue Montana State folks is the possibility of a 49ers-Eagles matchup in the divisional round. Alex Singleton, who played linebacker for the Bobcats from 2011-14, is a member of the special teams unit in Philadelphia.

One of Person’s noted misgivings about his career to this point — not that there’s much bellyaching to be done about being a nine-year veteran — is the fact that he had previously been cut from three teams that eventually went on to play in the Super Bowl: the 2012 49ers, the 2013 Seahawks and the 2016 Falcons.

If San Francisco is fortunate enough to make it that far this season, Person should be along for the ride.

The last Montana State product to play in the big game was Dane Fletcher, who did so with the Patriots in Super Bowl XLVI. But Person isn’t thinking that far ahead.

“It’s the old cliché. It’s just so hard to win a football game,” said Person, who has yet to play in an NFL postseason contest. “Everybody has to be 100% locked in, dialed and know what they’re doing, first and foremost.

“Our team has been really good about finding those little details to lock in to, whether it be game plan or film study. It think it all begins with that, to be honest.

“There’s always that little bug in the back of my head that serves as extra motivation for me — not that you need more motivation to make the Super Bowl. But it would really mean a lot after the journey that my wife (Kelly) and I have been through. Hopefully we can take care of business and get there.”

BILLINGS — They say money makes the world go round, but what’s foremost to Mike Person — and the key to his implausible NFL longevity — is an …