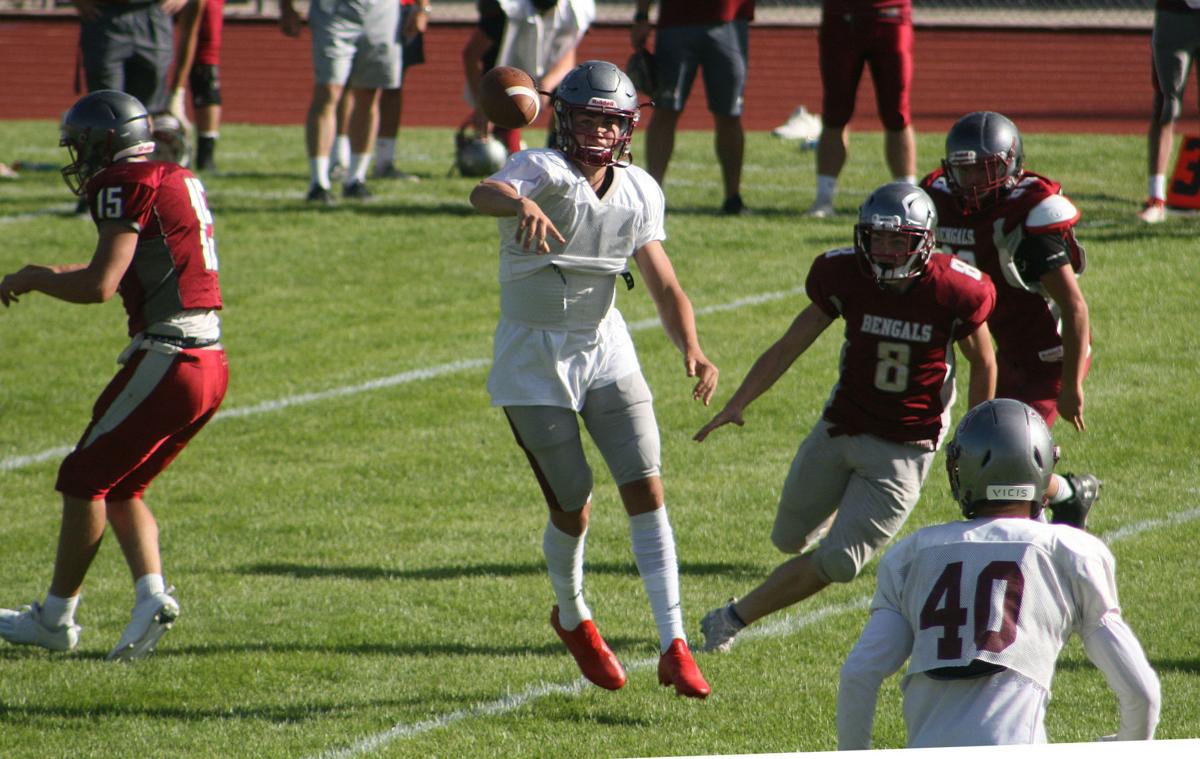 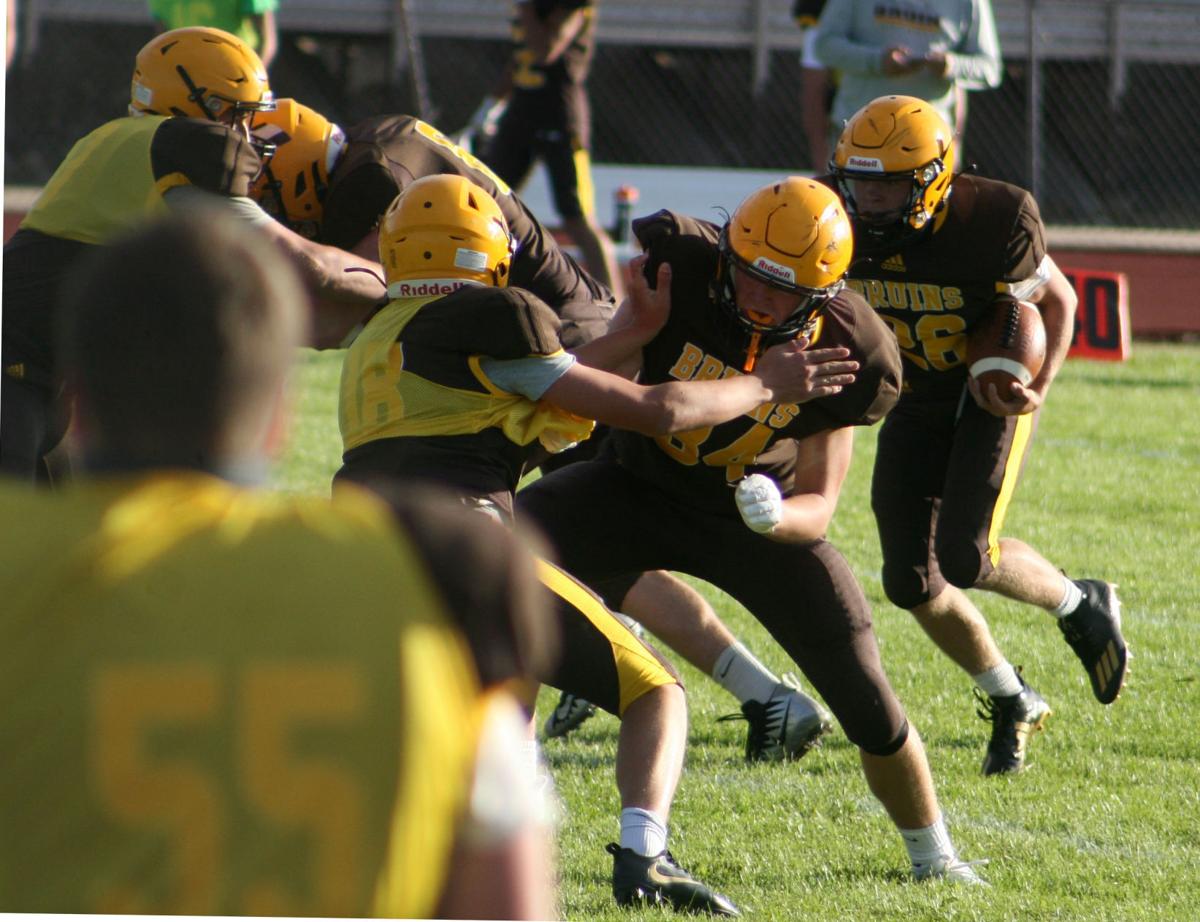 Helena Capital running back Carson DesRosier runs through the defense during an intrasqad scrimmage on Thursday at Vigilante Stadium. 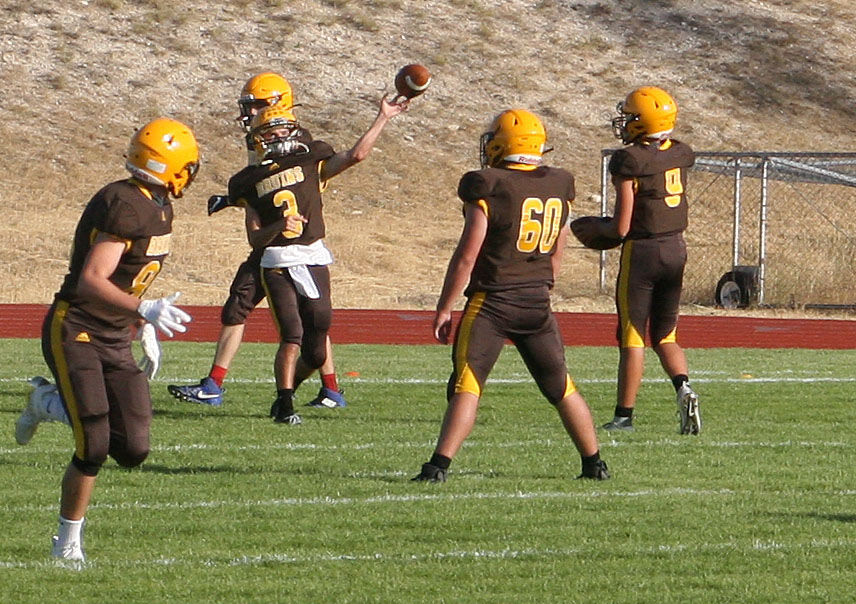 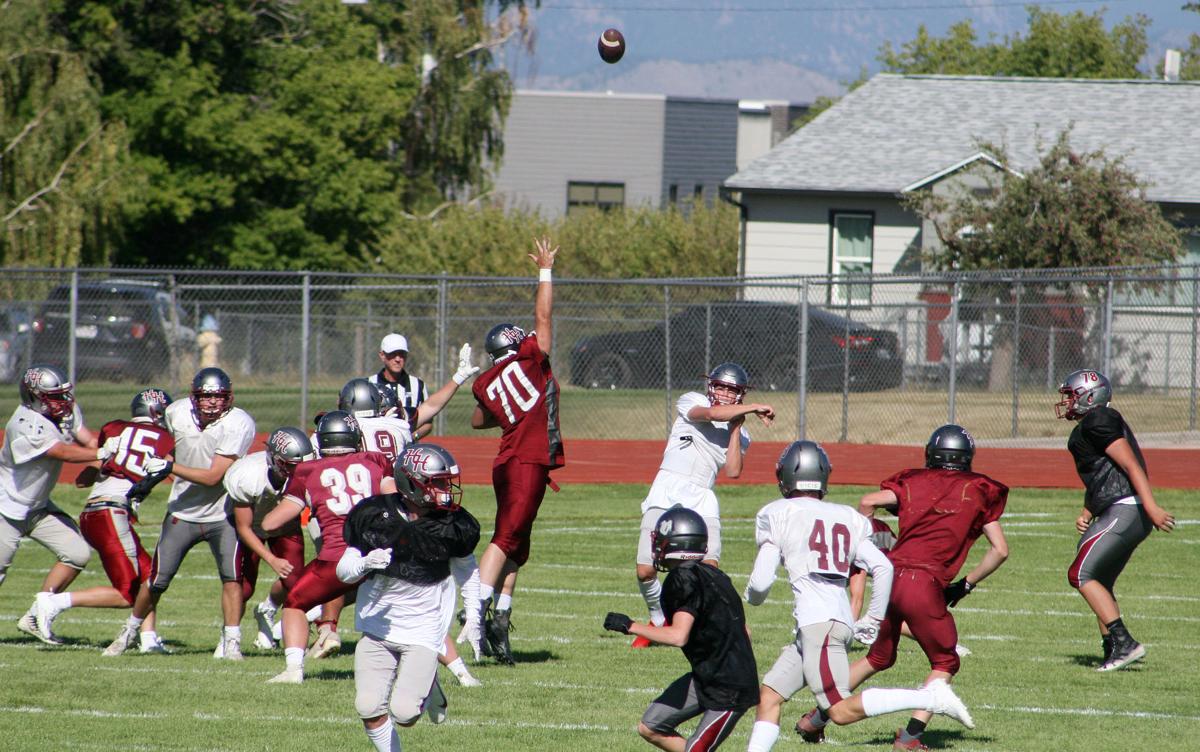 For the first time this season, the Helena High and Helena Capital football teams stepped onto the field at Vigilante Stadium Thursday for their annual scrimmages.

The Bengals and Bruins did so without fans, although, thanks to an amendment passed by the Lewis and Clark County Health Board, when they take the field the next at Vigilante for their home openers, spectators will be allowed, in a limited fashion.

But Thursday's scrimmage was limited to just the two teams. Still, news about spectators reached the field.

"I just found out while we were on the field," Helena High head coach Scott Evans said. "We will talk to the kids about it later. We are just focused on football."

Much of the focus for Helena High centered on the quarterback and in particular, Kaden Huot.

Huot was the Bengals' starter a year ago, but as he enters his junior season, a big leap in production is expected and on Thursday, Helena's QB met expectations.

Early in the scrimmage, Huot floated a deep pass by down the sideline to Raef Miller who went approximately 65 yards for a score. It was the first of two touchdown receptions from Miller in the scrimmage, which was controlled.

"I liked what we did passing the ball," Helena head coach Scott Evans said. "We had some crisp passes in the end zone and had some guys open on the deep ball. That's what I wanted to see today and we were able to get that."

The scrimmage included certain situations, such as giving the offense the ball at the 20, in the red zone or goal-to-goal.

In the red area, Huot was also efficient, leading two touchdown drives and capping one drive with an impressive dart in the back of the end zone to Dexter Tedesco. Chase McGurran also hauled in a deep touchdown pass.

"Kaden is going a better job of formulating the pocket," Evans said. "He's not just bailing out, he's hanging in the pocket and he delivered a couple of balls to Tedesco, Miller and McGurran, which were basically just scramble plays and he was able to make something happen."

The Helena defense, which is loaded with experienced starters such as Zachary Evans, Marcus Evans, Ben Swanson, David Lowry and McGurran, among others, was also solid forcing a couple of turnovers against the No. 2 offense.

Soon after the Bengals wrapped up their scrimmage, which lasted around an hour, the Helena Capital football team took the field led by head coach Kyle Mihelish and new starting quarterback Matt Burton.

Burton is taking over for Bridger Grovom, who graduated after two years as the starter. The senior was the backup a year ago, but has little varsity experience.

On Thursday, he looked comfortable in the scrimmage and led a couple of scoring drives in a solid showing for the Bruins offense. Senior wideout Quinn Belcher was sharp, as were multiple backs including Tiegan Cozzie and Carson DesRosier.

“I thought Matt managed the offense well," Mihelish said. "He had two good series and we ran the ball really well. That’s a credit to the offensive line. Sometimes you have a stalemate with the ones and the twos but our offense played well.”

The Capital defense also had its moments. Maybe the best when was senior Jacob Welnel came up with an interception.

Helena High will open its season at home next Friday against Butte High. Capital will be on the road against Kalispell Glacier.