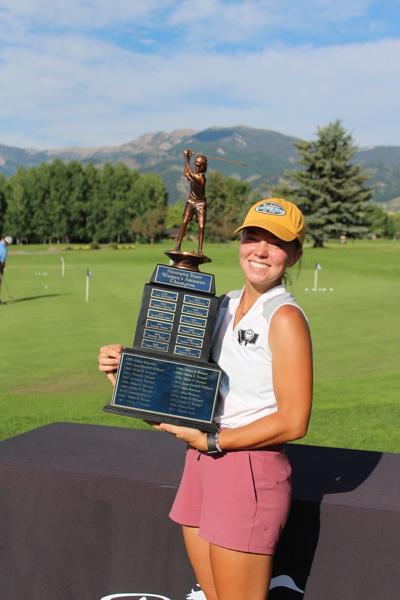 BILLINGS — Annika Danenhauer watched a first-round lead slip away at the 2018 Montana Women’s State Amateur Championship. Two years later, she got some redemption.

Danenhauer, a 2019 Bozeman graduate and current sophomore at Montana State, shot a 1-over 72 Saturday at Riverside Country Club in Bozeman to win the 103rd Women’s State Am by five strokes. It’s Danenhauer’s first State Am title.

“I’m glad it finally happened,” Danenhauer told 406mtsports.com Saturday over the phone. “I’m just so glad it was able to happen given everything that’s happening.”

Danenhauer was referring to the coronavirus pandemic, which has forced the cancellation of events across the state, country and world (Montana reported 224 new cases on COVID-19 on Saturday, a single-day record). The spacious nature of golf allowed the Men’s State and Senior Ams to be played last week in Billings and the Women’s State, Mid and Senior Ams to take place this weekend, with several health precautionary measures.

Cora Rosanova, who just graduated from Bozeman and will be Danenhauer’s golf teammate at MSU, carded a 1-under 70 in Thursday’s opening round — the best single-round score of the tournament. Danenhauer posted a 75 that day — far enough back to give her some doubts, but within striking distance.

“I was definitely focused on consistency,” Danenhauer said. “You can put up a good round, sure, but what about the next two?”

Danenhauer shot a 74 Friday, while Rosanova shot a 78, which meant Rosanova’s lead was down to one entering the final round.

Danenhauer remained one behind Rosanova through six holes Saturday. On the par-5 seventh, Danenhauer chipped in for eagle to take a one-stroke lead.

“I was excited,” Danenhauer said. “It was definitely a little shift. I was like, ‘Oh, I forgot, anything’s possible with golf.’”

The two Bobcats were tied going into the 10th hole, which Danenhauer birdied and Rosanova bogeyed. Danenhauer’s lead continued to increase the rest of the back nine.

Danenhauer ended up at 8-over 221 for the tournament. Rosanova shot her second straight 78 on Saturday to finish at 13-over 226 overall.

Sidney’s Tierney Messmer was third at 16-over 229, and Billings’ Carrie Carpenter finished fourth at 19-over 232. Kameryn Bayse, a 2018 Bozeman grad who recently transferred to MSU, placed fifth at 20-over 233.