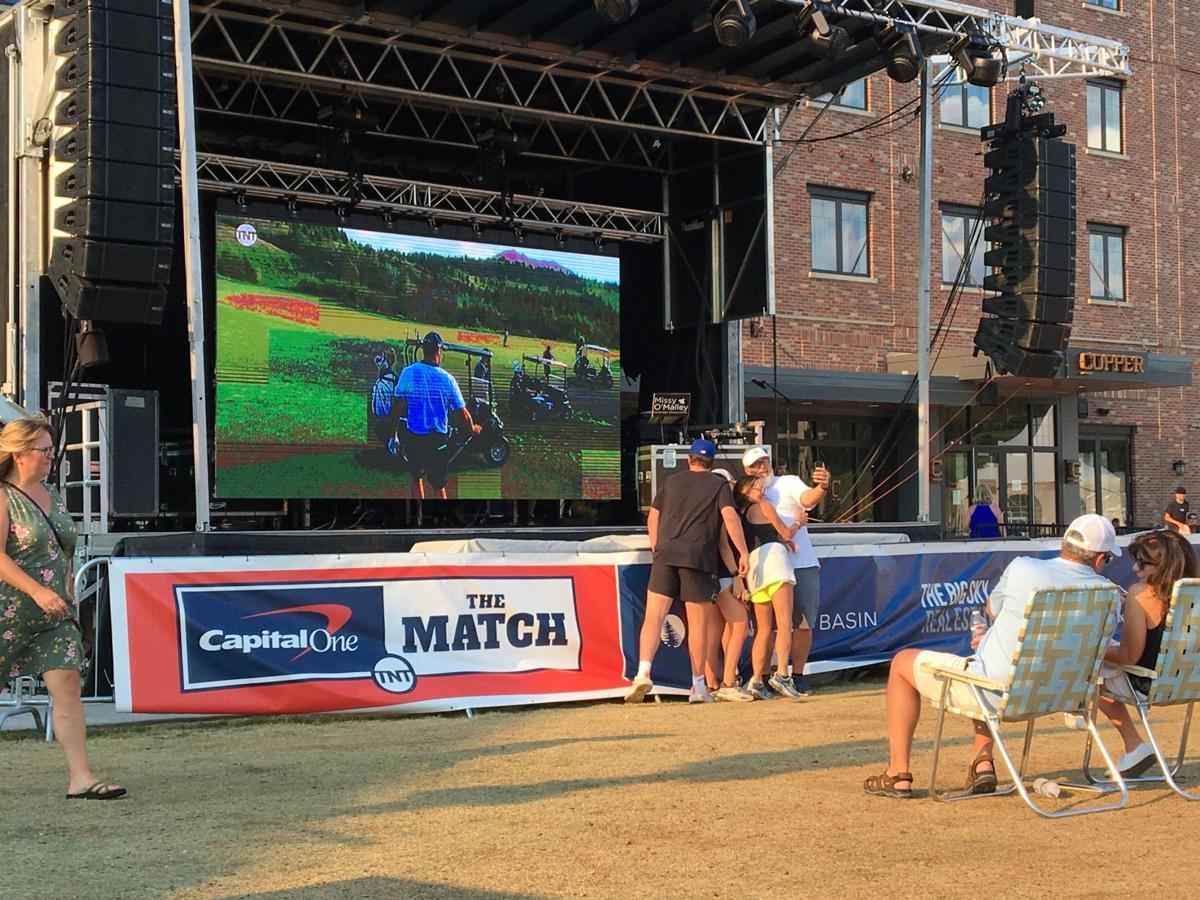 People pose for a selfie while others watch "The Match" golf event on a big screen at the Town Center Plaza in Big Sky on Tuesday. 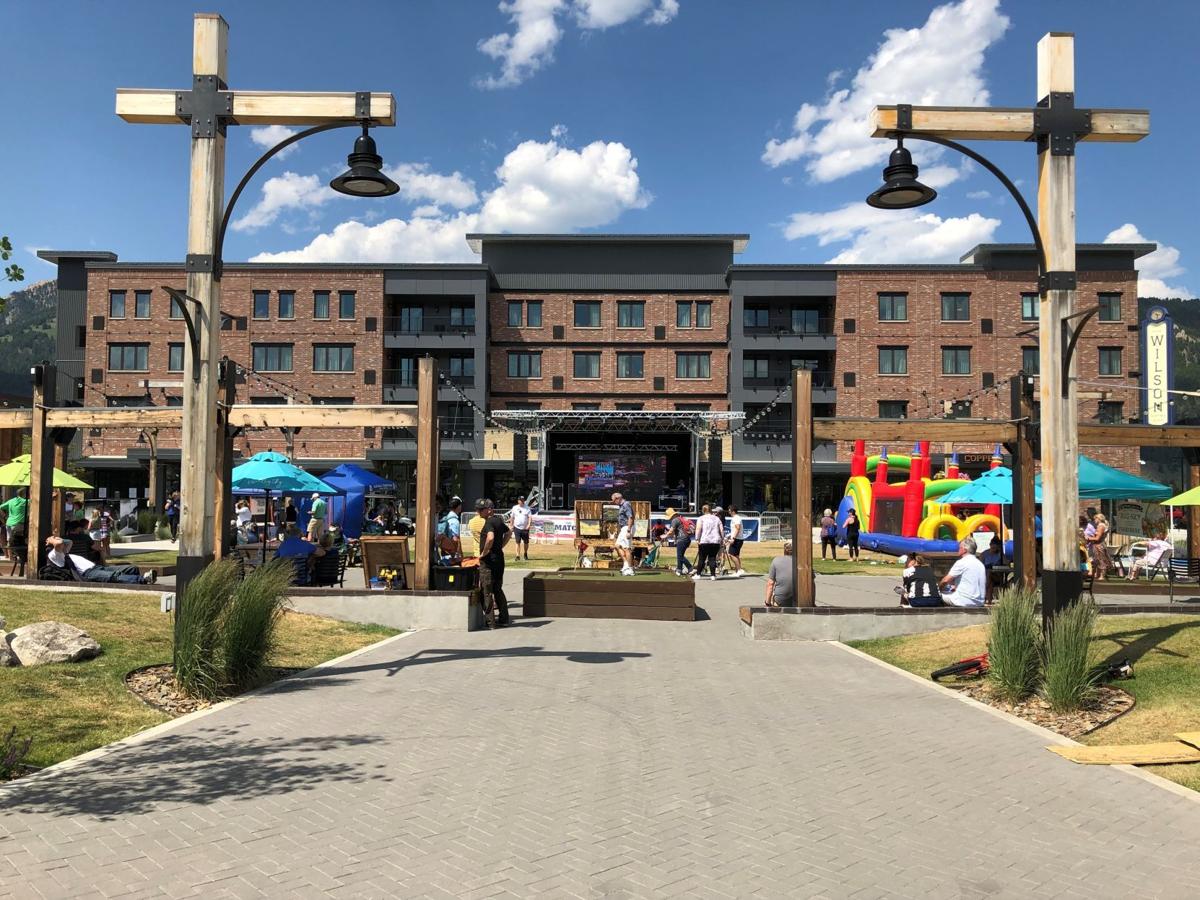 The Town Center Plaza in Big Sky hosted a viewing party for "The Match" golf event on Tuesday. 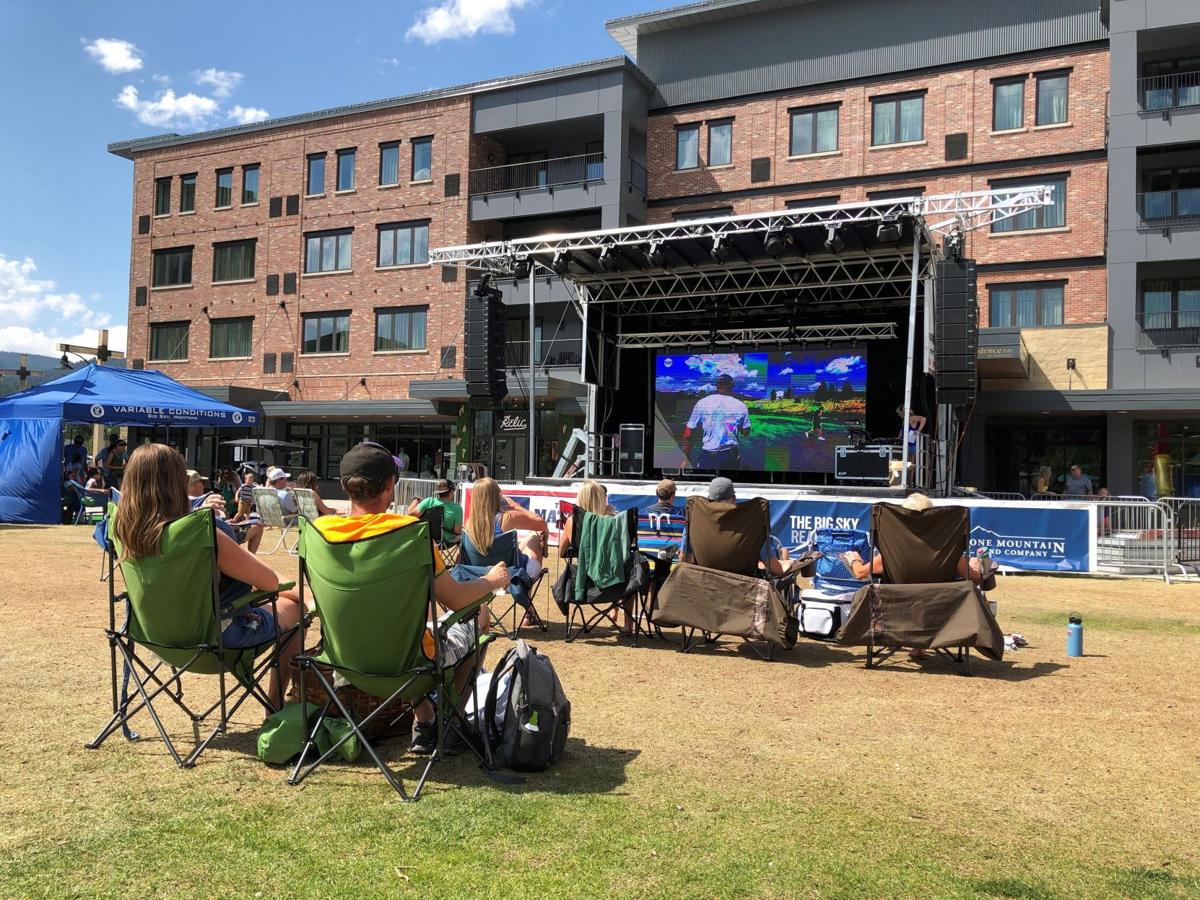 People watch "The Match" at the Town Square Center in Big Sky on Tuesday. 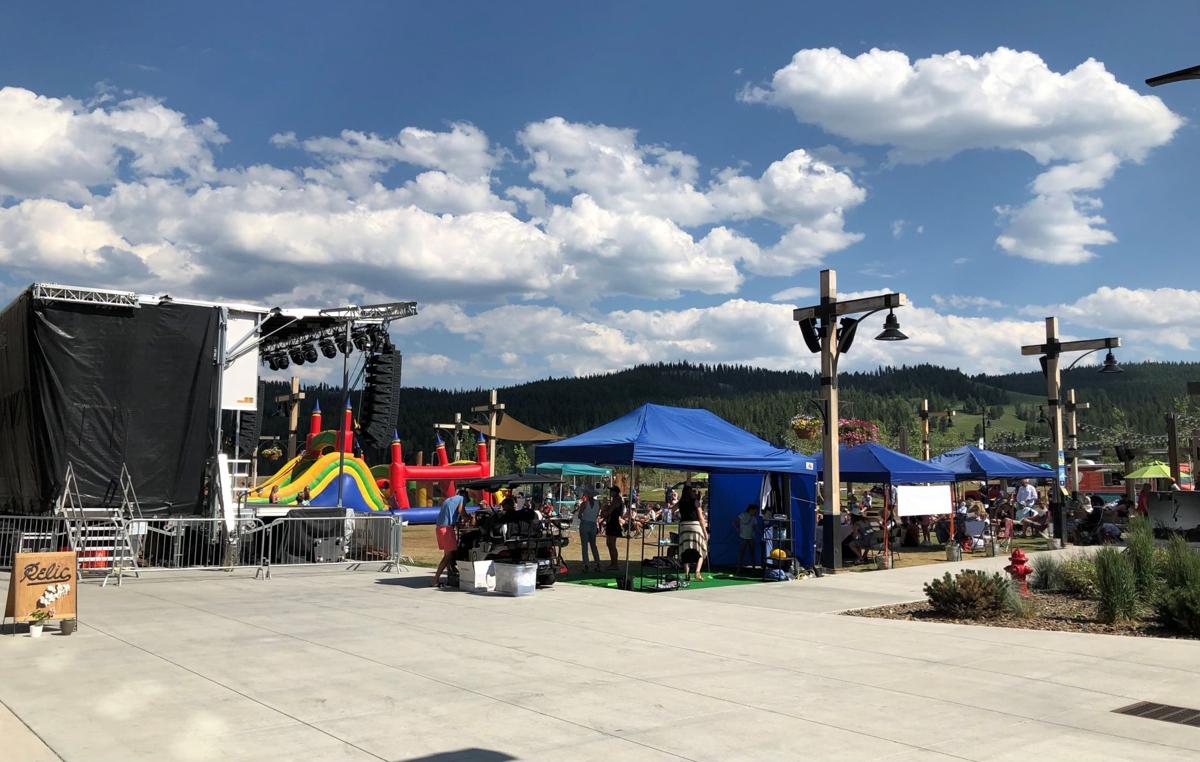 A watch party for "The Match" golf event was held at the Town Square Plaza in Big Sky on Tuesday.

BIG SKY — The people in attendance for Tuesday’s “The Match” watch party were so close, yet so far.

The Match was a golf event featuring all-time great NFL quarterbacks Tom Brady and Aaron Rodgers and PGA Tour stars Bryson DeChambeau and Phil Mickelson (Brady and Mickelson are members of the Yellowstone Club). The two-team match play event televised on TNT took place Tuesday afternoon/evening at The Reserve at Moonlight Basin. The Reserve, a course designed by golf legend Jack Nicklaus that is carved into the Madison Range of the Rocky Mountains, is a 30-minute drive from Big Sky’s Town Center Plaza, where the watch party took place.

It was the fourth edition of The Match, and none have included spectators or outside media. The previous two Matches happened in the middle of the coronavirus pandemic, but considering vaccination rates and loosened restrictions, that wasn’t a factor Tuesday. It’s a made-for-TV event. One of its main draws is the mic’d up players bantering with each other and the TNT broadcasters on site. Seeing The Match in person would almost defeat the purpose.

There were about 50 people at the Town Center Plaza when The Match began at 3:30 p.m. Tuesday, and the crowd got approximately twice as big at various points. Many were intently watching The Match, while others played mini golf, hit balls in a golf simulator, played in a bouncy castle or grabbed food/drinks. It was far from a front row seat, but considering the scenery, it was hard for watch party attendees to complain.

“You can hear the wind on the mic (from the broadcast) and you feel it in your hair down here,” Love Street Media owner Erik Morrison told 406mtsports.com in the plaza during the early stages of The Match. “You kind of feel the connection.”

One of the watch partiers was Andrea Rhodes, who made the trip to Big Sky that day from Pocatello, Idaho. Her New England Patriots cap gave away who she was rooting for: Brady, who led the Tampa Bay Buccaneers to a Super Bowl win in February after winning six titles in New England. She left the plaza disappointed: DeChambeau and Rodgers defeated Brady and Mickelson 3 and 2.

Rhodes didn’t know about The Match until Tuesday morning, when her uncle informed her. She zoomed up to Big Sky shortly thereafter and hoped her uncle, a photographer, could get them into The Reserve. They, like every other non-Moonlight member, were turned away.

Hours later in the Town Center Plaza, Rhodes said it was “so frustrating” that she was so close to Brady but couldn’t see him in person.

“I didn’t really think it would happen, but how could I not try? Tom Brady’s three hours from home,” Rhodes said. “I guarantee I’m the biggest Tom Brady fan here.”

Despite the denial, Rhodes didn’t regret the three-plus-hour drive Tuesday. The broadcast of The Match would have been the same no matter where she watched it, but the experience would have been much less memorable if she stayed home.

“This is way cooler,” Rhodes said. “Who doesn’t want to be in Montana whenever they can be?”

The Match was projected onto a big screen on a concert stage outside the Residence Inn. Many attendees sat in lawn chairs on the main grassy area, while others sat further back at tables by sidewalks. It was an 80-degree day with a few clouds breaking up the enormous blue sky. Surrounding the plaza was a lumpy sea of pine green with some jagged peaks in the distance. Yellowstone Club snowboard instructor Missy O’Malley emceed the event, letting crowd members know about the food and beverage options, the mini golf, the simulator and more.

Morrison, the watch party’s main organizer, said the event came together in about two weeks. He was tasked with tying the exclusive Match into the community. A watch party quickly came to mind, as did a charitable aspect. The Match generated millions of dollars and meals via Feeding America, the My Brother’s Keeper Alliance and the Montana Food Bank Network. Morrison and his staff partnered with the Big Sky Food Bank, which is part of the HRDC, a Bozeman-based nonprofit affiliated with Feeding America.

“It seemed like a perfect match. No pun intended,” Morrison said with a laugh. It was “basically a micro version of what they’re doing at The Match.”

The only people on the course during The Match were the four athletes, a fleet of camera operators and other Turner Sports employees, according to Lone Mountain Land Company communications director Leslie Kilgore. Moonlight Basin members could attend a different watch party at the ski resort, and that was limited as well. The Town Center Plaza viewing party was as close as the general public could get to The Match.

“It is kind of a weird feeling, isn’t it? Watching Charles Barkley on the screen and being like, ‘Holy smokes, they’re right up there,’” O’Malley said, referring to the TNT commentator and NBA hall-of-famer.

Jordan Wilson, a restaurant supervisor at the Yellowstone Club, was not allowed to go to the Moonlight Basin watch party unless he was working, which is why he was sitting on the lawn at the Town Center Plaza.

“I had members wanting to give me tickets to say thank you for some things I did for them in the past,” Wilson said, “but work was like, ‘No.’”

Wilson was hardly bummed, in part because he met Brady once during a shift at the Yellowstone Club and had a long conversation with Brady’s parents (Wilson has yet to meet Mickelson).

Wilson, a North Carolina native who has lived in Big Sky for three years, understands why The Match was so exclusive and was more than content to see his friend, O’Malley, and bask in the scenery of the place he calls home. He was not alone.

“I think the Big Sky, Bozeman, southwest Montana community just wanted to show up and be part of something pretty extraordinary,” O’Malley said. “I just love how much they’re focusing on feeding children, feeding families, feeding the community and just getting that word out. Big Sky’s a pretty affluent community. It’s for the privileged. … So I think it’s kind of cool that they’re putting it on the map for a good reason.”

Sand traps on either side of the green. Another in the fairway. Trees granting little room for error.