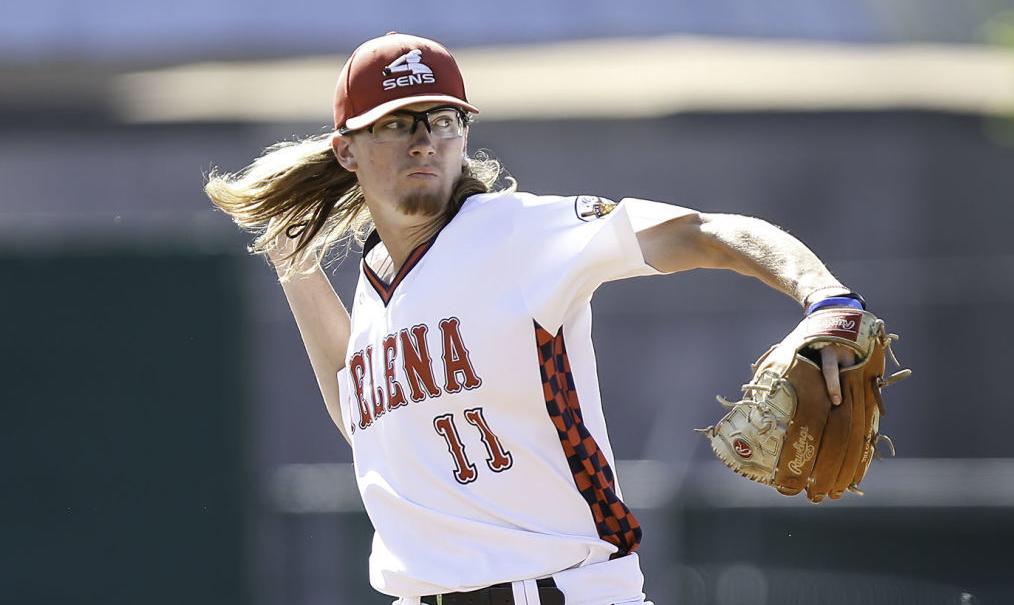 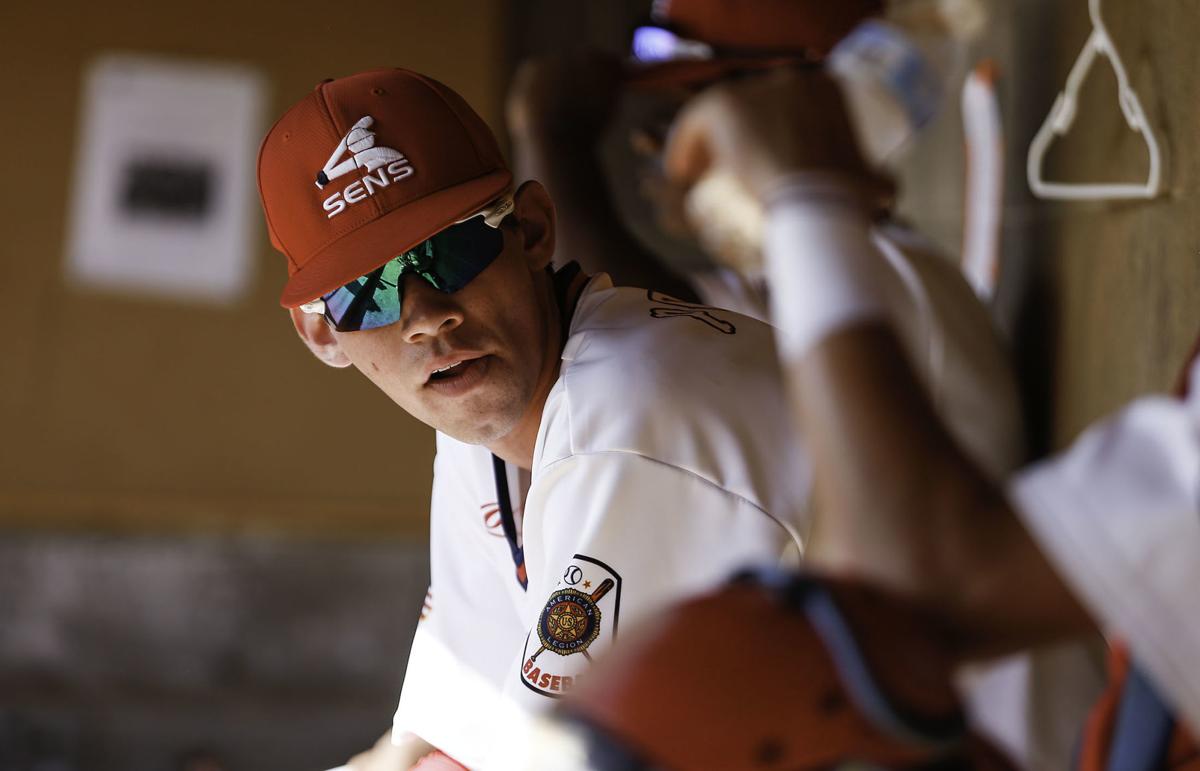 Hunter Lindgren sits on the bench Tuesday in Helena. 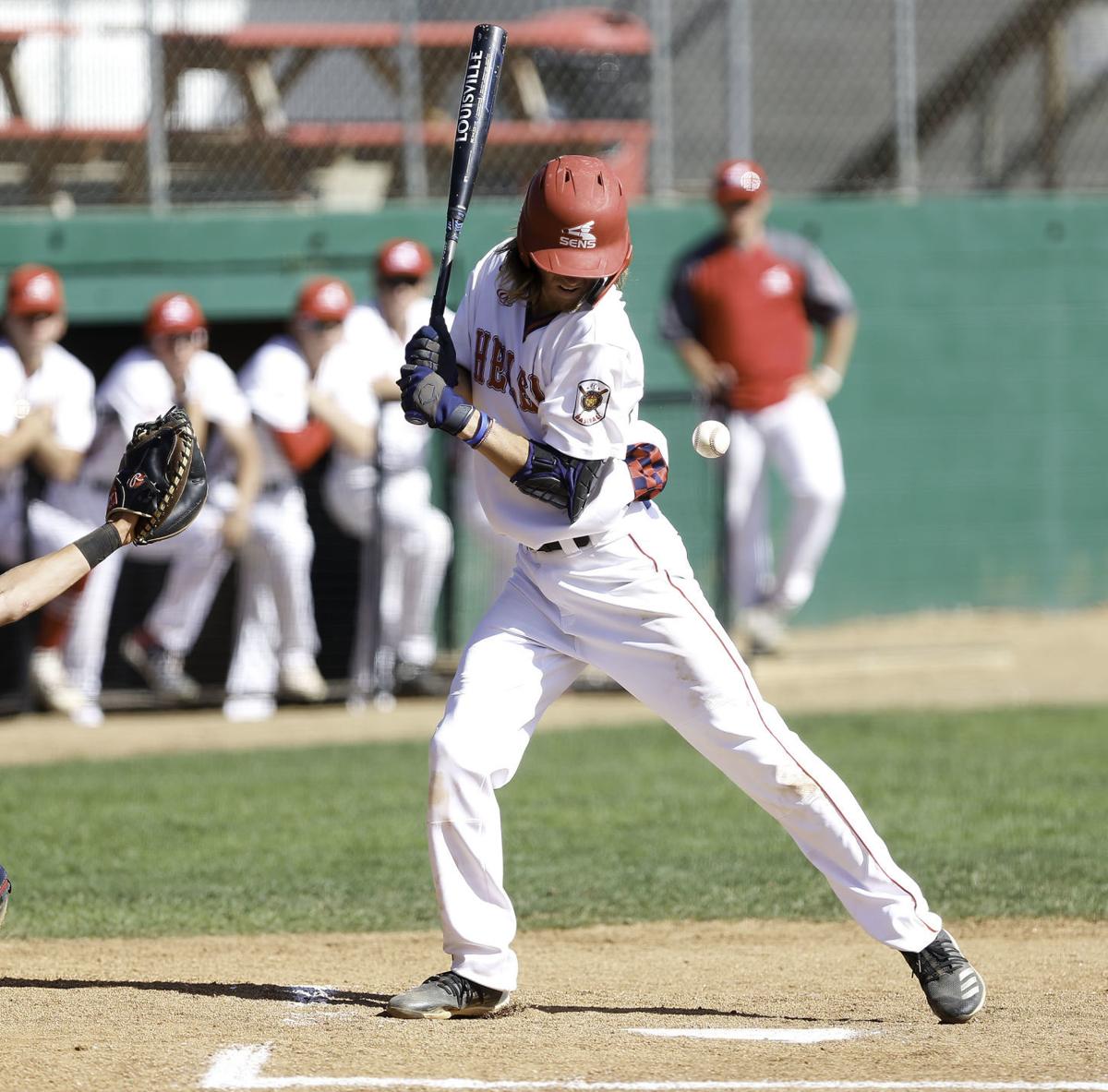 Ethan Keintz is hit by a pitch Tuesday night in Helena.

Hunter Lindgren sits on the bench Tuesday in Helena.

Ethan Keintz is hit by a pitch Tuesday night in Helena.

HELENA — Without two strong outings from Senators starting pitchers Tuesday night at Kindrick Legion Field, Helena would have been in for a long week. After a pair of conference doubleheaders against the Kalispell Lakers, the Sens travel to Bozeman for a tournament this weekend.

Not to be outdone, Lindgren took a perfect game into the sixth inning during the second game. He finished with six innings of one-run ball and on two hits and struck out six. He walked just one batter.

"With four conference games in two days, it's nice for those guys to go deep," Senators coach Jon Burnett said. "You know, Ethan with a complete game and Hunter gets us six. It's just great to be able to save that pitching staff. They were efficient and worked in the zone, and we played good defense behind them."

So they played small ball.

Singles by Matt Krieger and Trysten Mooney put runners at the corners with two outs. Burnett put on a double steal and Krieger scored the first run of the game thanks to an errant throw by Luke Holland. Holland was later ejected for arguing balls and strikes.

During the bottom of the fifth, Helena tacked on three runs by way of two bunt singles, a sacrifice bunt and a squeeze play. A couple more Kalispell errors didn't hurt, either.

Chase Nielsen and Mooney each had two hits for the Senators. Mooney has recently taken over as starting catcher after the departure of Kadyn Craigle and is looking more comfortable with each game. One of his hits was a two-out, go-ahead RBI single in the fourth inning.

"(Mooney's) a sophomore so just, every rep he can get he gets more confident with every one," Burnett said. "He caught two games today, which he hadn't done all year. He's been splitting, and we'll probably split him tomorrow. But he did a great job defensively with that big two-out hit for us."

Keintz had to work his way out of a couple jams during the early going. He allowed a pair of base runners in the first, but wiggled out of it with a double play. He stranded another runner in the second. Then Ethan Diede doubled home Ben Corriveau in the third.

During the top of the third, Keintz took a tumble and appeared to hurt himself. It looked worse than it was, but it was a startling moment.

"I threw a curve and I hit my knee with my elbow. And I basically felt my whole arm go," Keintz said.

He got back on the rubber and finished the inning.

During the next half inning, he was hit by a pitch for the second time of the game. From that point on, Kalispell could only muster one unearned run the rest of the way against Helena's ace.

Keintz was struggling to locate his curveball and after his scary fall, he shied away from it for most of the rest of the game.

"Today was mostly fastball and change-up," Keintz sad. "The curve, I couldn't really get it working especially after I hit my elbow. But I was keeping them off balance with the change-up and getting lots of balls in play right at guys."

There's not a ton to say about Lindgren, other than everything was working for him.

When you can locate three pitches consistently at any level, you're going to have success.

"In the bullpen, my curveball and change-up weren't really there. But then I got out on the mound, locked in and was able to locate," Lindgren said.

It would have been the third perfect game in Senators history, had Lindgren completed it.

Coincidentally, Helena was held hit-less longer than Kalispell. The Senators entered the bottom of the sixth up 2-1 with zero hits. The difference in the game was a run balked home by Lakers starter Kostyn Hoffman.

The wheels eventually came off for Kalispell and Helena scored five unearned runs in the sixth as the Senators continued to bunt the Lakers to death.

Eamon Burke pitched the seventh for the Senators to secure the doubleheader sweep.

Kalispell and Helena will play another two games Wednesday at Kindrick Legion Field. First pitch is at 1 p.m.