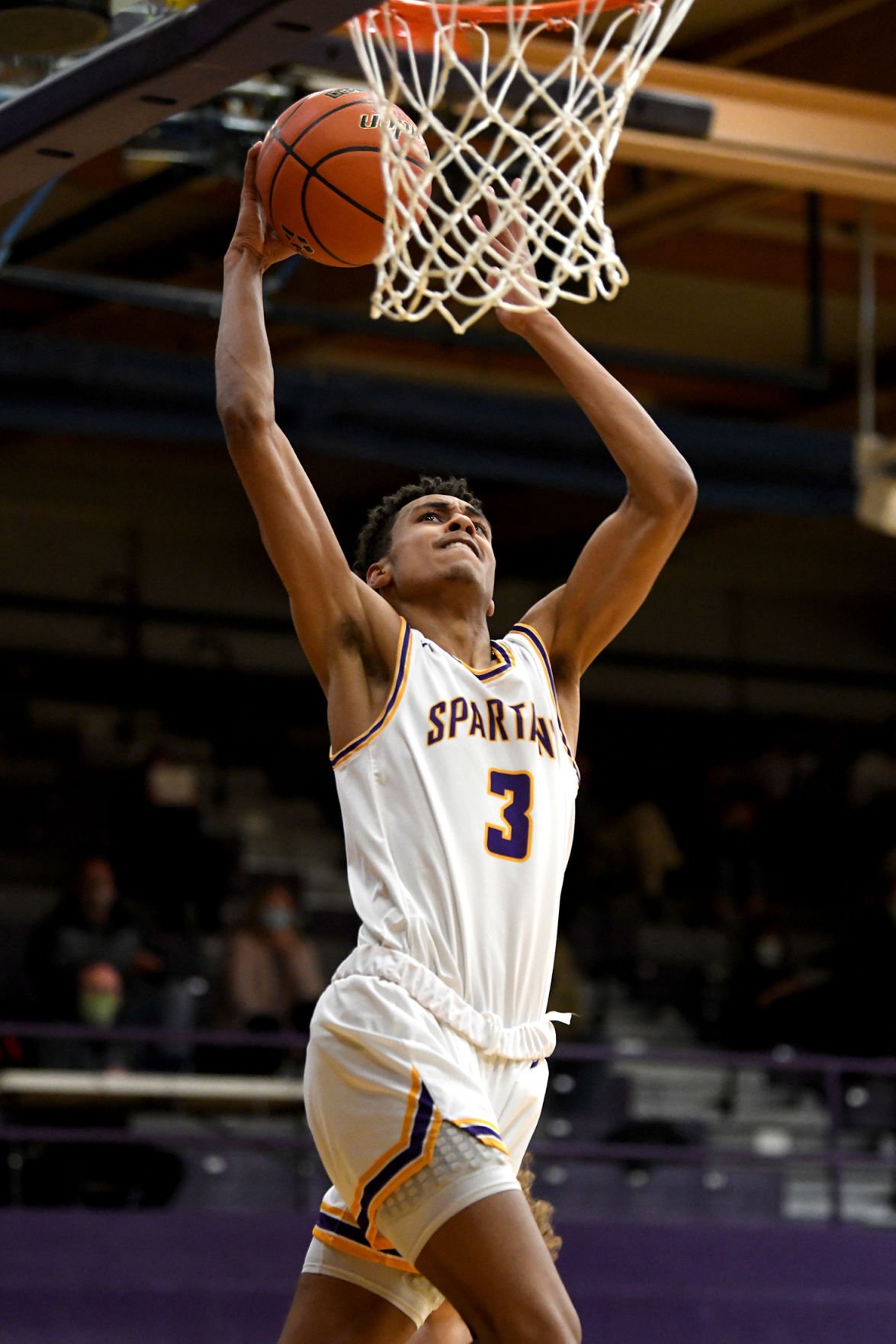 Sentinel’s Tony Frohlich-Fair goes up for a dunk off a fast break during their basketball game at Sentinel High School on Thursday night. The Spartans defated the Eagles, 74-68. 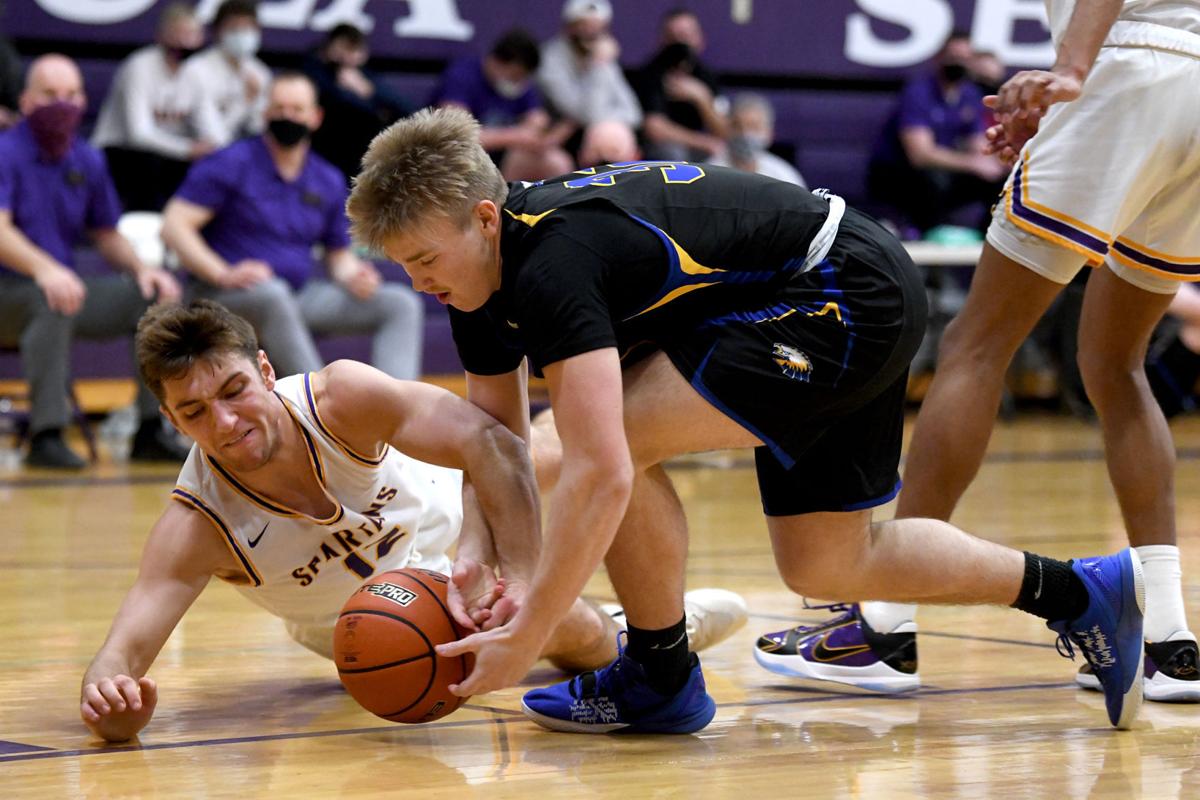 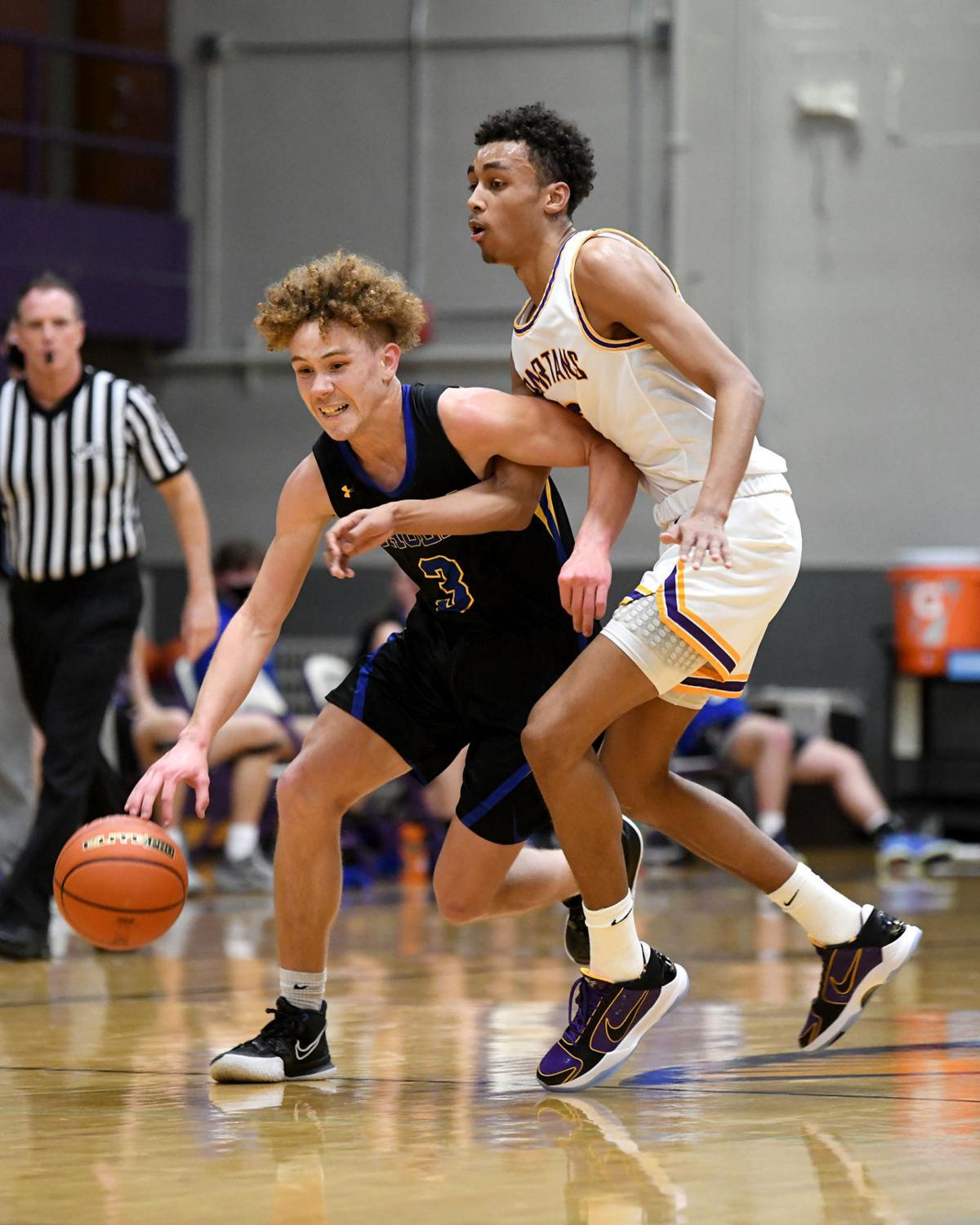 Sentinel’s Tony Frohlich-Fair goes up for a dunk off a fast break during their basketball game at Sentinel High School on Thursday night. The Spartans defated the Eagles, 74-68.

MISSOULA — Missoula Sentinel coach Jason Maki doesn’t have to be reminded about his final game as a player against Missoula Big Sky.

Maki had his Sentinel playing career ended by the Eagles in a play-in game for the 1990 State AA tournament. Now 31 years later, he finally got the chance for some revenge in his first crosstown game since returning to his alma mater over the offseason.

The top-ranked Spartans got Maki that long-awaited win with a 74-68 victory in a game that wasn’t as close as the final score indicated on Thursday at Sentinel. They improved to 5-0, while the Eagles fell to 2-3 in the first crosstown boys basketball game of the season in the city while playing in front of a limited crowd because of the pandemic.

“These rivalry games are fun,” Maki said. “I’ve heard the rumors of the packed houses, and hopefully in a year we’re back to those things. It’s just fun to play those because the kids know each other. There’s a sense of familiarity between the kids, playing together in AAU. It was definitely physical, fun and intense.”

Maki, then a Spartans center, ended his career with four consecutive losses to Missoula Big Sky, going 0-3 as a senior and 2-4 in two years on varsity while battling against Big Sky’s Shawn Huse, now the MSU-Northern head coach. The rivalry game against Big Sky was even more important to him than a regular crosstown contest because his mother worked for Big Sky as the head cook at the school.

After fouling out with 20 points in his final game against Big Sky, Maki went on to play at Whitman College and spend 25 years coaching high school basketball in Oregon before returning to Sentinel. He inherited a talented team from former coach Jay Jagelski and has put his own spin on things with an approach focused on being “tough and together.”

Sentinel’s players had their own motivation for redemption after losing to Big Sky in their second regular-season meeting last year. The Spartans have now won 11 of their past 12 games against the Eagles.

“We try to see every game the same and focus on the now, and this crosstown game really brought that urgency to us,” said senior Hayden Kolb, who led Sentinel with a season-high 16 points by being more aggressive with the ball as Big Sky keyed in on Alex Germer and Tony Frohlich-Fair, who scored 15 and 12 points.

“Coach told us about his past crosstowns and emphasized to treat it like another game, which I liked.”

Maki added: "The bottom line is we lost to Big Sky last year, and they knew it and we got the ‘W,’ which is what they really, really wanted."

When Maki’s team suffered a 68-53 loss to Big Sky in 1990, it marked the 10th time in Big Sky’s 10-year history that it made the state tournament. The Eagles have struggled over the past handful of years but have looked much improved this season under second-year coach Ryan Hansen.

At 2-3, Big Sky has matched its regular-season win total from last year, when it pulled off a stunning 49-45 win over Sentinel on its way to a 3-18 campaign. This year, the Eagles haven’t lost by more than eight points, including an overtime loss.

“You don’t get to play the No. 1 team in the state every day, and being the first crosstown for a lot of these kids at the high school (varsity) level, I think they were excited,” Hansen said. “I think we’re working toward the end goal, so it’s fun to see going against the No. 1 team and seeing where we’re at.

“But I think it also revealed how much we have to work on, and I think we have a lot to clean up. I think maturity and getting more experience will help. They’re the No. 1 team in the state for reason. We’re still putting things together, and we’re still growing.”

Sentinel outscored Big Sky 48-24 over the middle two quarters to turn a 14-12 deficit after one quarter into a 60-38 lead entering the final frame. Sentinel led 33-24 at the half, opened on a 10-2 to begin to put the game out of reach and pushed its lead to 24 points.

“I think we can be pretty good when our defense creates our offense,” Maki said. “We had some steals and some tipped balls and got some rebounds and ran. We’re long and athletic, so in transition, we’re pretty good.”

Kolb added: “Our team is full of athleticism, and we like to use that as much as we can. We’re long, we’re lanky. We just really figured out that pressure was working, and we tried to exploit that as much as we could. Our defense led into offense, and we got a lot of open layups.”

Big Sky built a 14-12 lead after the first quarter, closing on a 9-0 run capped by a deep, turnaround, buzzer-beating 3-pointer from Kade Olson with two defenders on him. Olson finished with a game-high 20 points, while Tre Reed scored 14 and Chaz LaDue added 11.

Sentinel reclaimed the lead in the opening minute of the second quarter and never surrendered it. Big Sky trailed by 24 points in the fourth quarter, 66-42, but continued to battle against Sentinel's backups and got the deficit to 72-63 with 1:22 to play, forcing the Spartans to reinsert their starters.

“I thought they played their butts off,” Maki said. “They were physical, they were tough, they played hard. They played 32 minutes of hard basketball. They’re definitely getting things in the right direction.”