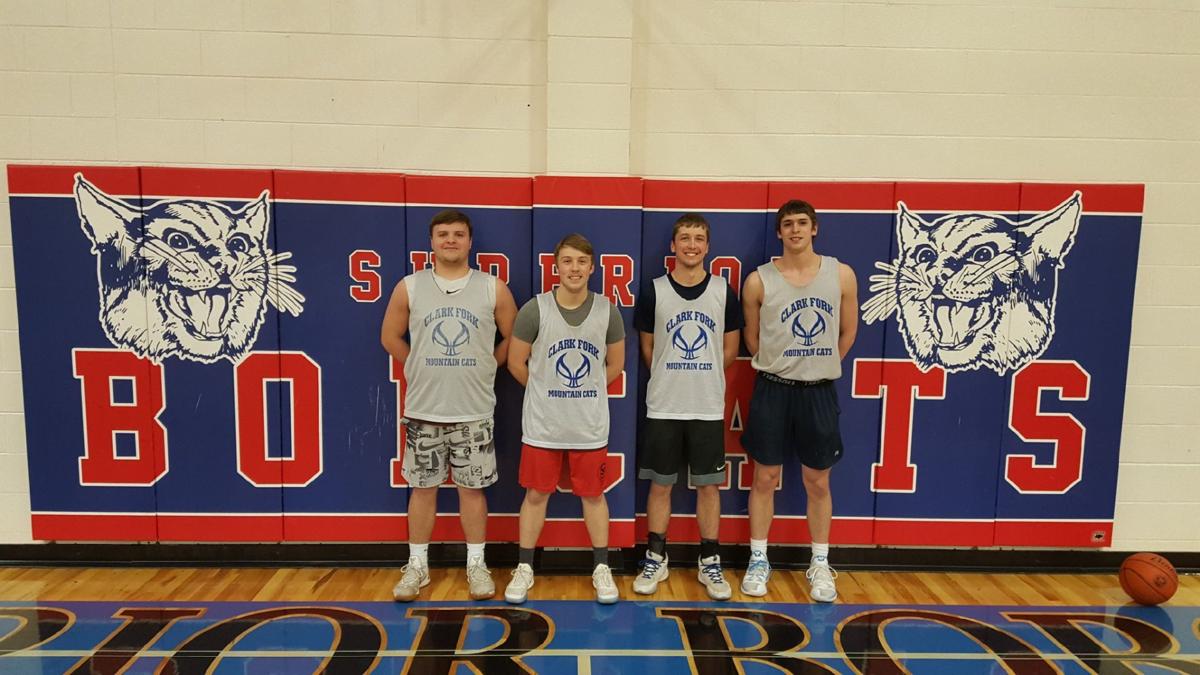 Clark Fork seniors (left to right) Aaron Waddle, Bryan Mask, Danner Haskins and Carson Callison pose for a photo at practice on Monday. They've played on varsity since they were in eighth grade and helped the Mountain Cats capture their first conference title in the sixth season of the Alberton-Superior co-op. 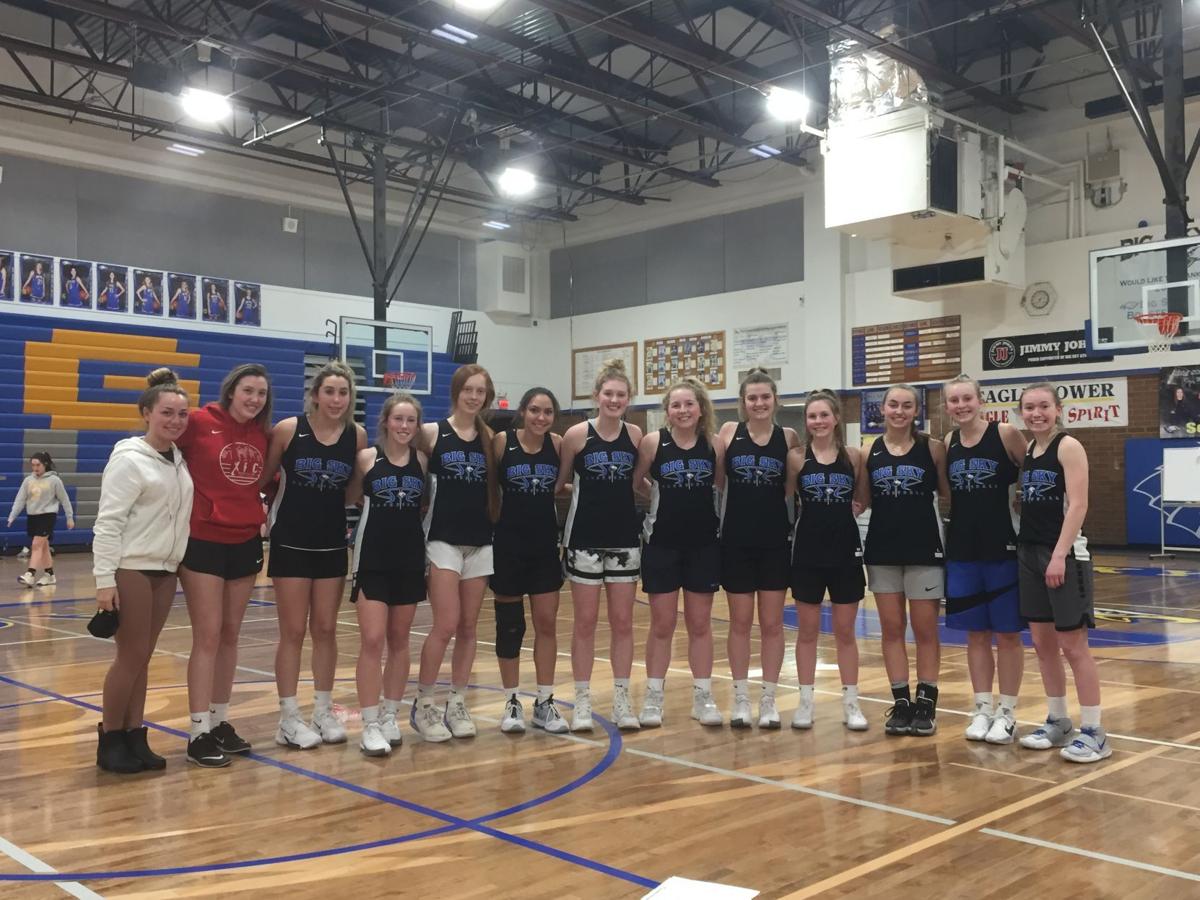 The Big Sky girls basketball team poses for a photo at practice on Monday in Missoula. The Eagles snapped a 43-game losing streak by beating Butte last week. 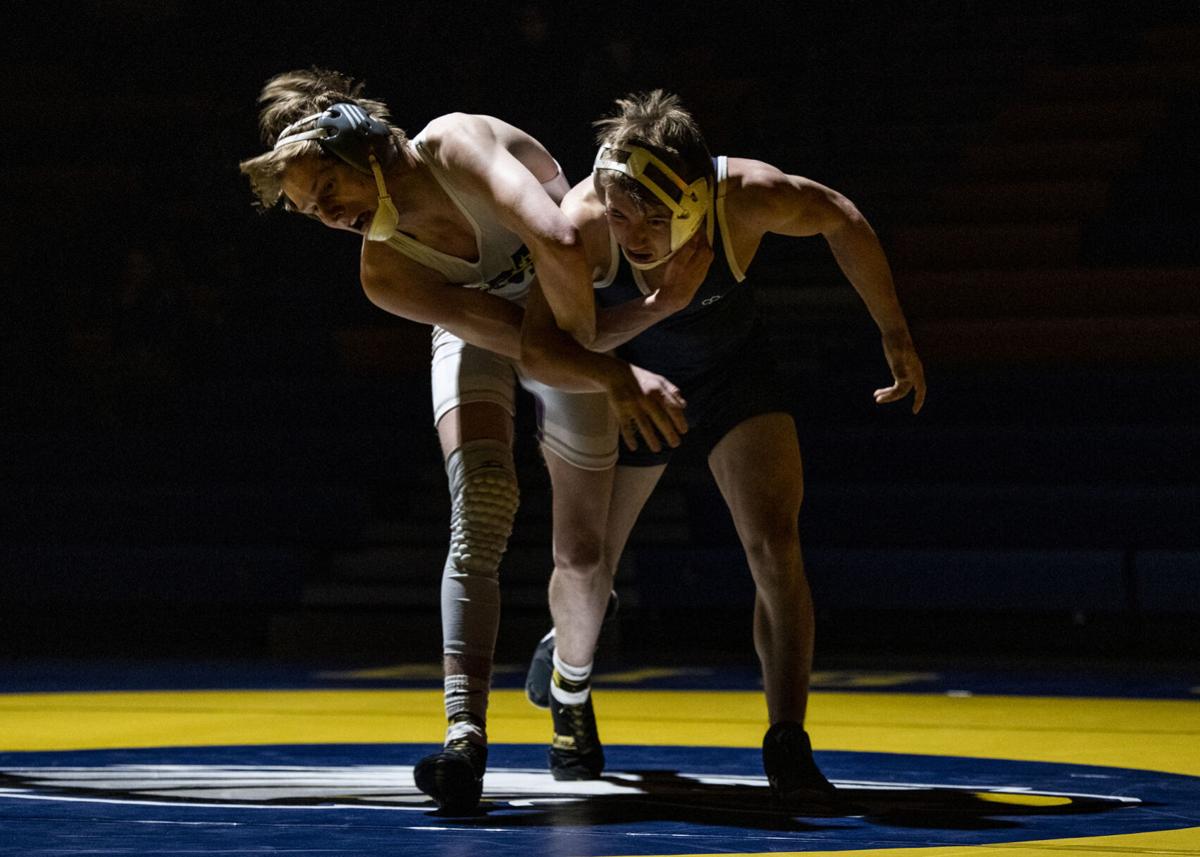 Clark Fork seniors (left to right) Aaron Waddle, Bryan Mask, Danner Haskins and Carson Callison pose for a photo at practice on Monday. They've played on varsity since they were in eighth grade and helped the Mountain Cats capture their first conference title in the sixth season of the Alberton-Superior co-op.

The Big Sky girls basketball team poses for a photo at practice on Monday in Missoula. The Eagles snapped a 43-game losing streak by beating Butte last week.

MISSOULA — It’s as simple as “ABCD” for the Clark Fork boys basketball team.

That’s Aaron (Waddle), Bryan (Mask), Carson (Callison) and Danner (Haskins). They’re the Mountain Cats’ four seniors, all of whom have been playing on varsity since they were eighth graders and starting since they were either freshmen or sophomores.

Their experience is showing through on the court in a big way this season. Clark Fork wrapped up at least a share of the Western 14-C championship on Saturday to claim its first conference trophy in its sixth year as a co-op between Alberton and Superior. The crown comes in its first year in the league and amid a pandemic.

“I feel like it’s their time. They’ve put their years in,” Clark Fork coach Erik Johnson said Monday. “They’re just a really fun ball club to be around. I enjoy coaching them tremendously.”

The thing is that Johnson doesn’t feel like he has to coach them a lot this season. That’s what he’s done the past four years as the team has been building toward this campaign.

Now, Johnson has given them the reins and is letting the four seniors show all that they can do. It’s working as Clark Fork is 8-1 overall and 7-0 in conference play after placing third at the Western 13-C district tournament last year.

“I really feel like if I were not to come to a game that they could handle it,” Johnson said. “They’re very smart, and we’ve had some growing pains for sure, but basketball seems to be something these kids are quite capable of doing. I think all four of them could be coaches.”

Callison, the lone player from Alberton on the 13-player team, is averaging a double-double between points and rebounds. He had 27 points, 15 rebounds, 10 blocks and six assists in a win over Hot Springs last week. Mask, Waddle and Haskins are also averaging double-digit scoring.

They’re having the success while playing a sort of positionless basketball. As Johnson describes it, Mask (5-foot-7) is the quintessential point guard, Waddle (5-10) can play the point while still being the team’s best post player, Callison (6-2) also plays the point while doing a bit of everything because of his athleticism, and Haskins (5-11) is the team’s top outside shooter but also a strong rebounder.

“They really don’t have these roles that you would expect,” Johnson said. “They’re very fluid. They do it all. They’ve been doing it since they were in the eighth grade. They were very good then. I’d like to think I helped them develop as basketball players.”

Johnson knew his team could be capable of putting together a special season, even while moving to a new conference. The team has played in the 13-C since the co-op was formed in 2015-16 because of plummeting enrollment at the schools along I-90 west of Missoula.

While they’ve played some 14-C teams in the past, now they’re seeing all of them and have to adapt to things like opposing coach tendencies. They’re still trying to stick to their style of basketball with an uptempo offense and hard-nosed man-to-man defense.

“There are some teams I hadn’t seen in the last couple years, but I’ve been expecting this for a long time,” Johnson said of the success. “So, it’s no surprise to me at all.”

The Mountain Cats became a “complete ball club,” as Johnson put it, when 5-10 sophomore and returning starter Orion Plaake came back two games ago after missing time. They’ve won those games by an average of 16.5 points as Plaake and the four seniors played all 32 minutes.

Clark Fork’s lone loss came in the season opener when three of its top six players didn’t suit up against Seeley-Swan for a variety of reasons, including some related to the pandemic and MHSA-required practice time. The Mountain Cats lost that game by just four points.

Now, they’re chasing their first state tournament as a co-op. They’ve shown they have the talent; they just have to keep it going and make sure it’s not the pandemic that derails their dreams.

“Honestly, it would have been a travesty if this group of boys didn’t get to play their senior year.” Johnson said. “I think they take every second to reflect and know how fortunate they are.”

The Missoula Big Sky girls basketball team (1-6) snapped a 43-game losing streak when it scored a 34-23 win over Butte on Thursday. It marked the Eagles’ first win since Dec. 8, 2018, when they had a 56-40 victory against Billings Skyview.

“As soon as the clock hits zeroes, I took two steps back and watched the girls,” Big Sky coach Jordan Featherman said. “They were in a huge mosh pit, jumping up and down. I just wanted to watch them celebrate.

“It hasn’t been an easy season. We’ve asked them to play harder than they have in the past. Practices have been harder. Then you throw the pandemic in there. Every day could be your last. It was a special moment to watch them enjoy it.”

The win is the first for Featherman, a 2007 Big Sky grad who played football and basketball for the Eagles and is in his first year coaching there. It’s the quickest first win over a Class AA team for Big Sky’s three past coaches; former coach Jordan Hansen went 0-20 in 2020, while previous coach Michaela Anderson went 6-54 from 2017-19.

It’s a remarkably quick win given that Big Sky returned just one starter and that seven of the 13 players on the varsity team, including the four other starters, didn’t play last season.

“They just needed more experience, not even in my system, just experience” Featherman said. “Asking them to compete at the highest level of Montana basketball, the Western AA is a nightmare, there’s not an easy team on the docket. Some teams may say Big Sky is the bottom team, but when they play us, they don’t get a bottom-team experience.”

Senior Corbyn Sandau is the lone returning starter and is averaging about 10 points for the team that’s running the Princeton offense. Junior starter Avari Batt, who missed last year with an injury, is averaging around 10 points and eight rebounds.

Senior starters Olivia Fichtner and Grace Denman didn’t play last year. Rounding out the starting five is freshman Audrey Hale, who excels as a defender in the team’s man-to-man pressure defense that includes a lot of rotating, the result of not having any players over 5-11.

“Our mantra all year has been that we have to improve,” Featherman said. “They’ve bought into it, and that’s refreshing to see high school kids put in the work despite not seeing the immediate results.”

Big Sky isn’t satisfied with just the one win, though. It's trying to keep winning this season while laying the foundation for the future to return Big Sky to its past success.

The Eagles are still seeking their first winning record since 2016, when they went 13-10 and last made the state tournament, under then-coach Jason VanderWall in his lone season.

“These girls play for each other, and that’s the best thing we could ask for,” Featherman said. “It’s all the girls trying to compete and turn around a program. We had them write down their goals, and they want to help make Big Sky girls basketball something the younger girls want to come be a part of.”

Sentinel wrestling has reclaimed the Missoula city championship for the first time since 2018. The Spartans had won 11 consecutive city crowns before Big Sky captured it each of the previous two seasons, according to Sentinel coach Jeremy LaPorte.

This year, Sentinel opened the season with a 43-29 road win over Big Sky and followed up with a 46-27 victory against the Eagles. The Spartans took down Hellgate, 60-18, last week for their third win. They’ll match up with Hellgate one more time in the 14-dual regular season.

MISSOULA — Kalispell Glacier is on a roll.