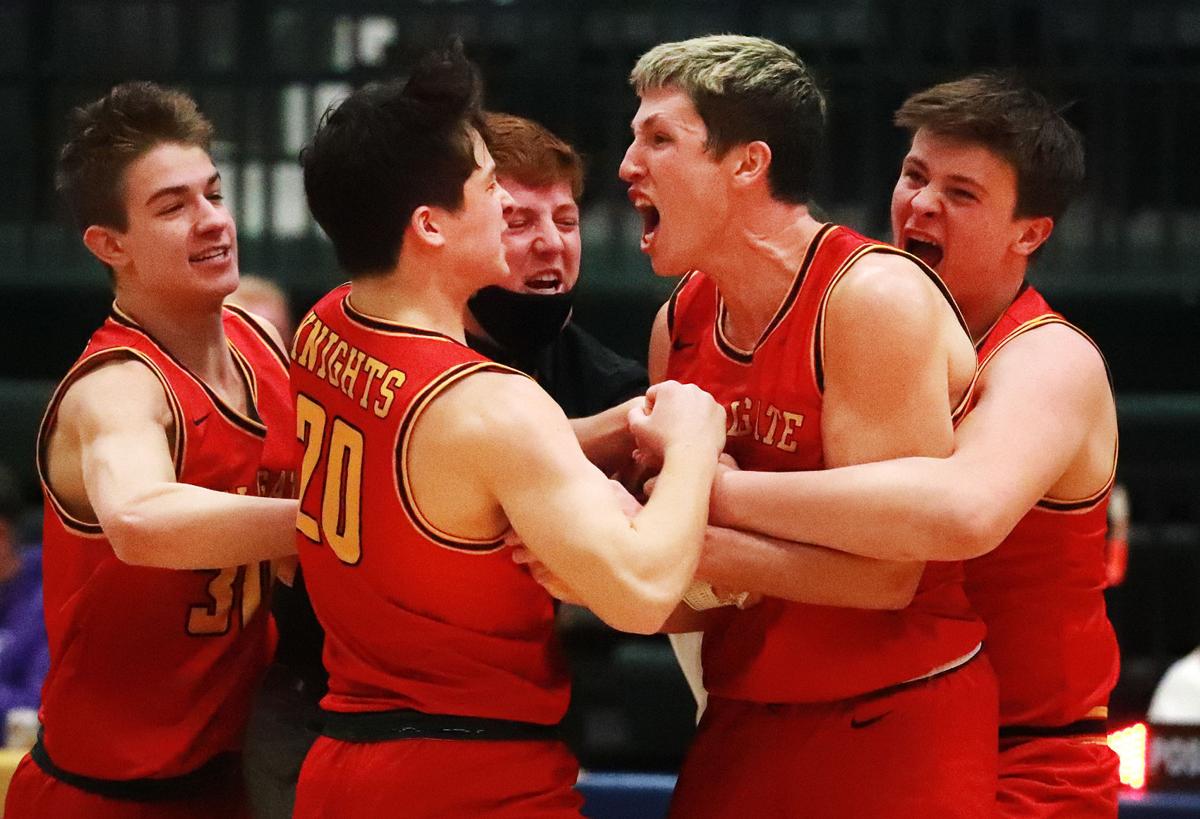 Missoula Hellgate players surround Beckett Arthur after he knocked down a three-point shot at the buzzer to defeat Butte High School in Butte. 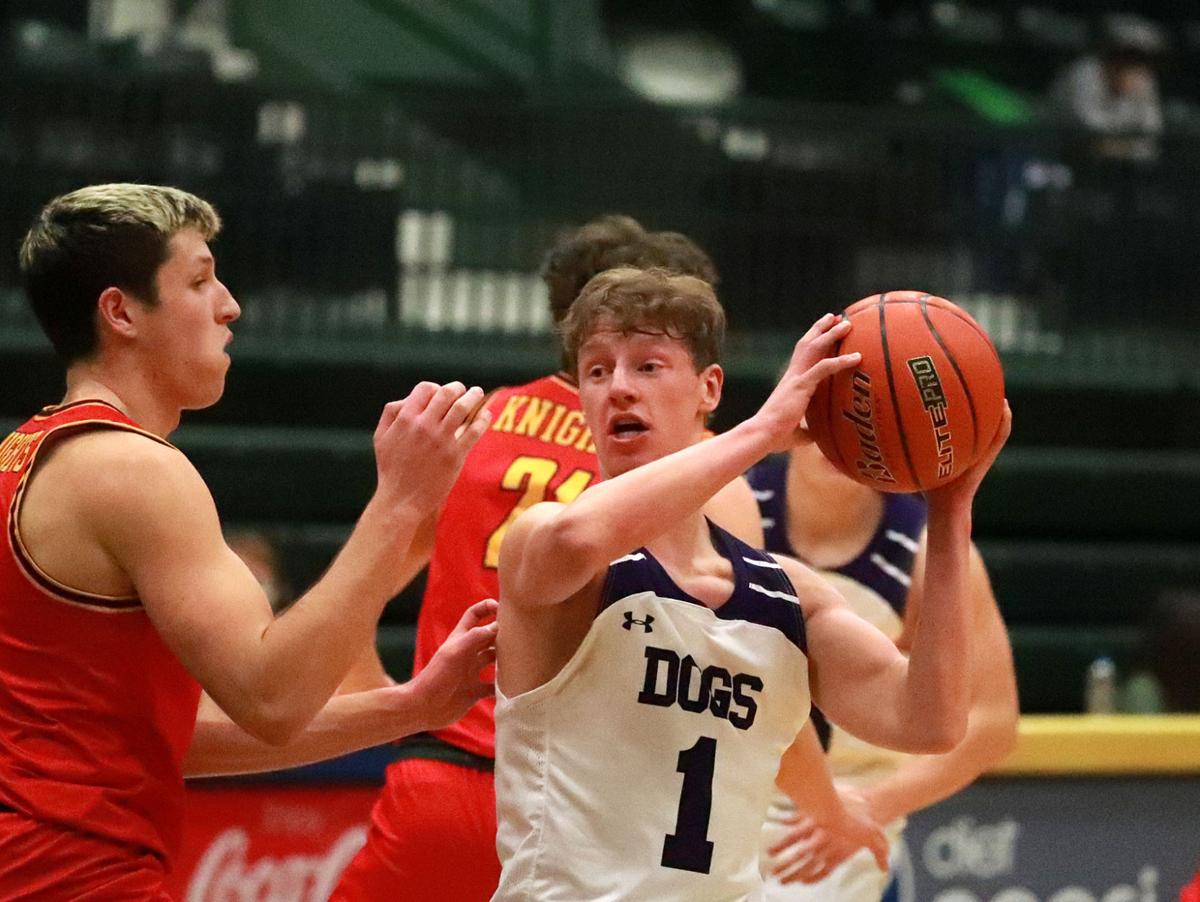 Butte's Blake Drakos looks to pass as he is defended by Missoula's Beckett Arthur on January 22 in Butte. 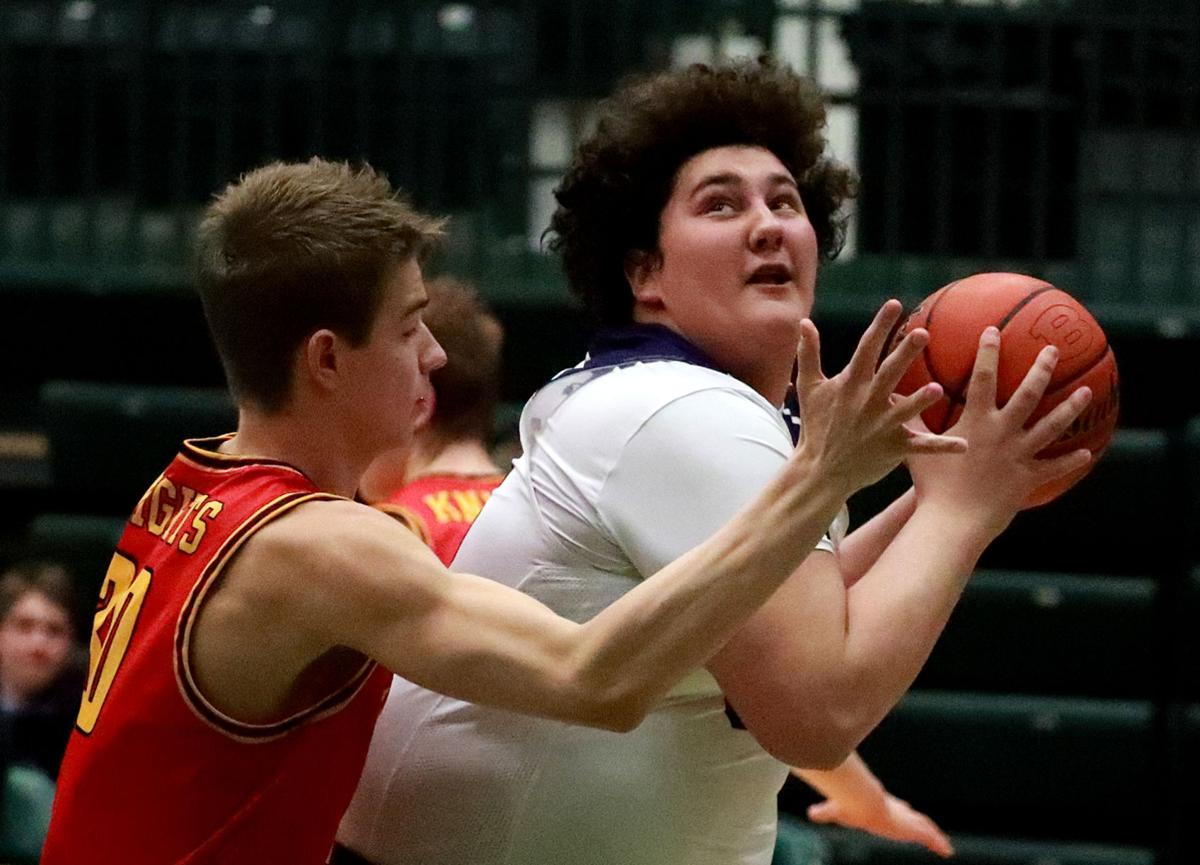 Butte's Kooper Klobucar takes the ball to the hoop on Friday night in the Bulldog's close game with Missoula Hellgate in Butte.

Missoula Hellgate players surround Beckett Arthur after he knocked down a three-point shot at the buzzer to defeat Butte High School in Butte.

Butte's Blake Drakos looks to pass as he is defended by Missoula's Beckett Arthur on January 22 in Butte.

Butte's Kooper Klobucar takes the ball to the hoop on Friday night in the Bulldog's close game with Missoula Hellgate in Butte.

BUTTE — The Bulldogs started out hot in an emotional Friday night game against Missoula Hellgate, but the Knights celebrated a 66-65 comeback win thanks to a buzzer-beating 3-pointer by Beckett Arthur in overtime.

Against an effective zone defense, the Knights struggled to find good shots in the first quarter. The Bulldogs also controlled the pace, a much different approach than their previous game against Flathead.

"I think we should've won the game if we had executed, making late game shots is something we'll have to work on," Butte coach Matt Luedkte said. "I thought we fought hard until the end we just made mental mistakes. I was proud of the effort."

The defensive side of the ball was not fruitful for the Knights in the first half either. The Bulldogs hit three first quarter three-pointers and turned to Jake Olson, who finished with 14 points.

The Knights continued to struggle in the second quarter and did not appear to adjust well against the patient Bulldog defense. The Bulldogs led 34-29 at halftime.

"That was two good basketball teams, Butte was awfully tough tonight," said Knights coach Jeff Hays. "They were making shots and Olson was difficult to stop inside. But our guys hung together and competed and found a chance down the stretch."

The Knights noticed the paint-protective defense of the Bulldogs, and looked to the perimeter for scoring in the second half. They found success from range and tied the game at 41 with under two minutes left in the third.

Just as the Knights found their shot, Cael Stinson (Butte) drained a three with one minute remaining in the third, killing their newfound momentum. But the Knights continued to fight.

"We were stagnant in the first half. We were robotic and mechanical, we kind of just went to motion in the second half," Hays said. "We were moving and playing under control, we wanted inside out action and we made one more play."

The Bulldogs entered the fourth quarter with a 49-41 lead. Despite better shooting from the Knights, the Bulldogs remained persistent with the zone defense.

As the Knights had trouble stopping Jake Olson due to his strength and size, the Bulldogs doubled down on their offensive approach. Big man Kooper Klobucar entered the game in the fourth with Olson and finished with three points at a crucial stage of the game.

"I don't know what we were, but we didn't hit shots down the stretch," Luedtke said. "We have a lot to learn from, any late game experience is very valuable and we'll do better next time. But hats off to them (Hellgate), they turned us over there a lot in the fourth quarter."

Down ten with under five minutes to play, the Knights turned to a press defense that forced three consecutive turnovers.

The Bulldogs were determined to run out the clock, but the Knights had different plans. The Knights turned to fouling and tied the game with twelve second remaining. After several trips to the line, the game was sent into overtime.

In the overtime period, every possession was crucial. The Bulldogs held a one point lead with less than ten seconds remaining, when Hellgate's Beckett Arthur nailed a corner three as the buzzer sounded, pushing the Knights to a victory and massive celebration at midcourt.

"We had to play really well and compete all the way to the end," said Hays. "Even if we hadn't made that shot, we still played hard all the way through and competed. They've (Butte) got a good ball club and it's early in the season. We're still figuring things out."

Jake Olson led the Bulldogs in scoring with 14, while Cael Stenson scored 13 on three three-pointers. Billy Kelly also made a significant contribution and finished with ten points.

"We'll keep moving forward and keep trying to improve," Luedtke said. "On our home floor that's one I definitely thought we should have come away with."

Hellgate is scheduled to play Missoula Big Sky on Tuesday at 8 p.m. The Bulldogs are scheduled on Thursday at 7 p.m.