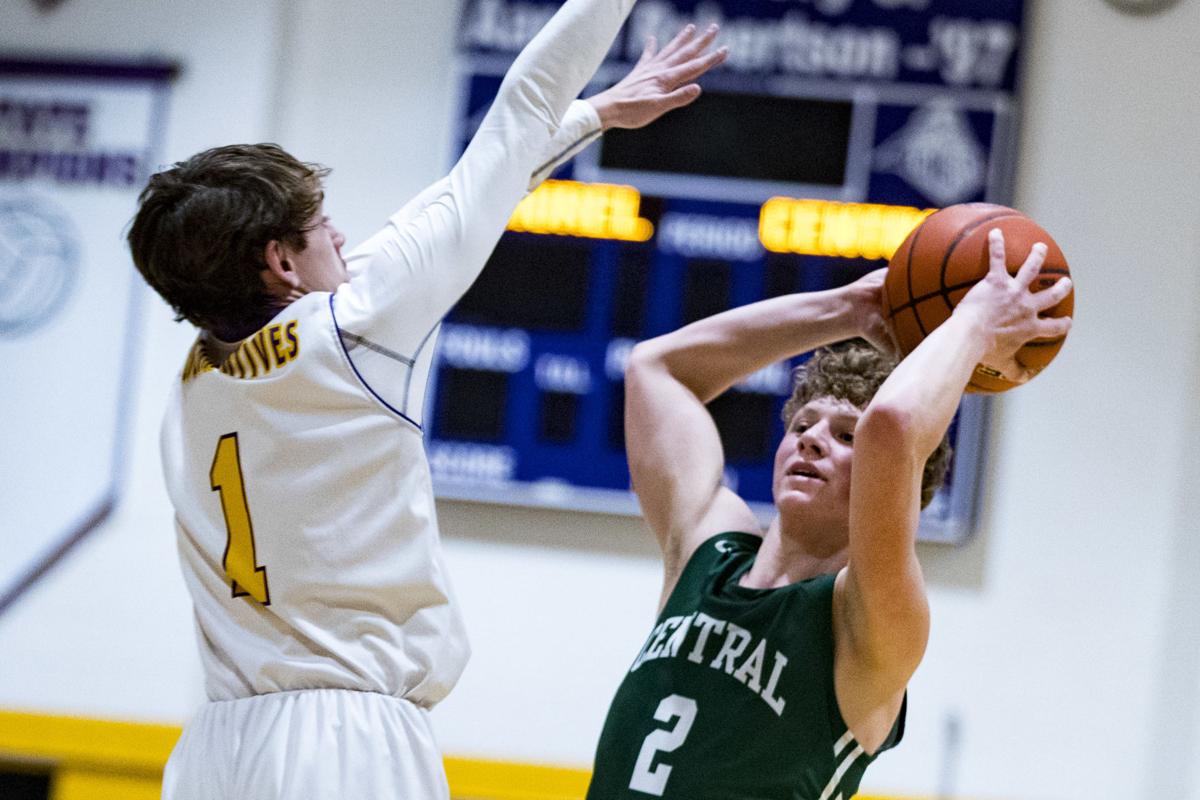 Billings Central's Marcus Wittman is one of three returning all-staters in Class A boys basketball. 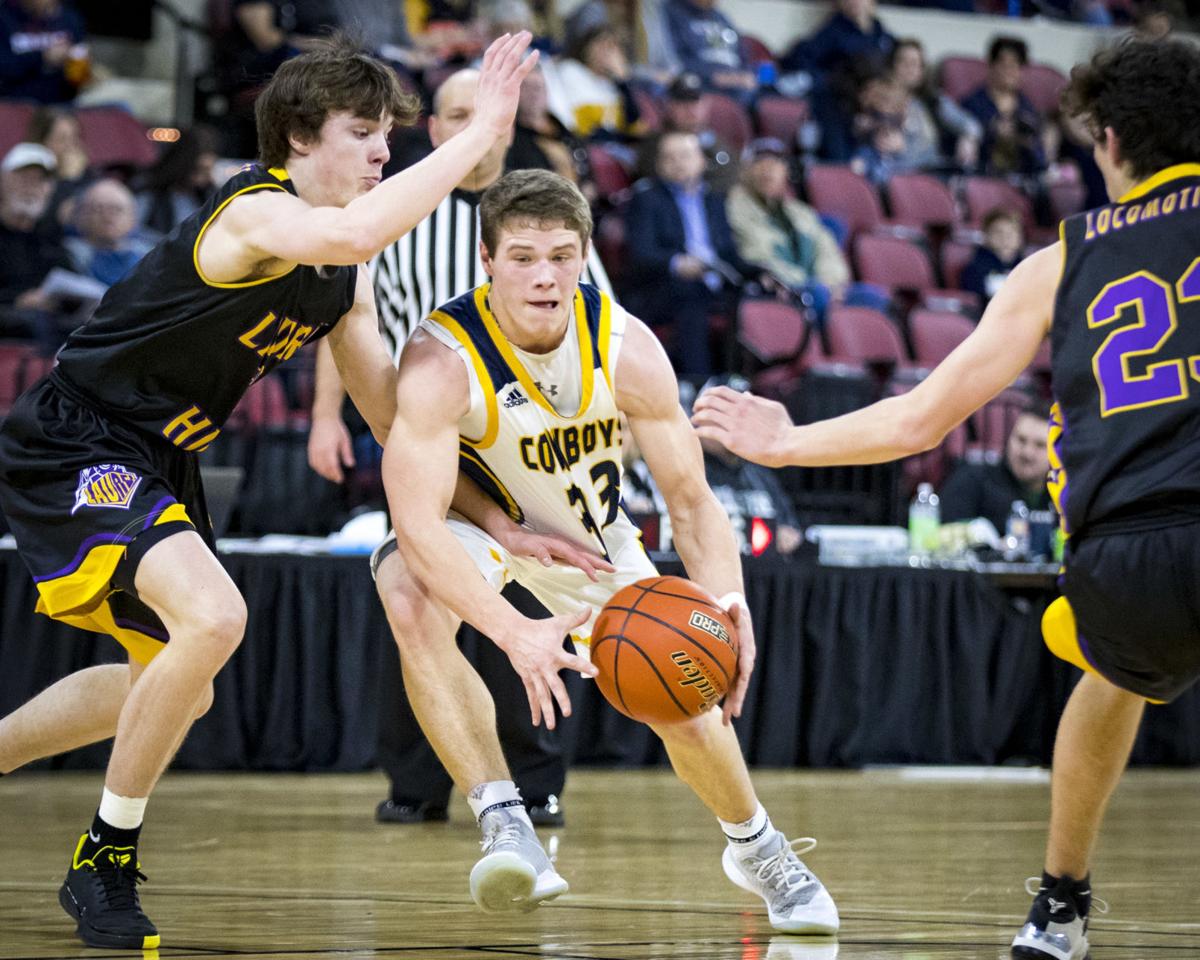 Miles City's Jayden Venable drives toward the basket against Laurel at the Eastern A Divisional tournament in Billings on Feb. 27, 2020.

Billings Central's Marcus Wittman is one of three returning all-staters in Class A boys basketball.

Miles City's Jayden Venable drives toward the basket against Laurel at the Eastern A Divisional tournament in Billings on Feb. 27, 2020.

• Hardin was back in a familiar spot and upstart Butte Central joined the Bulldogs to share last year's co-title, but both were hit by significant graduation losses. And they weren't alone, leaving the battle for the title apparently up for grabs in 2021. All five all-staters from Southwestern A and most of the honorees from Northwestern A, Southeastern A and Northeastern A as well graduated. In fact, only three all-staters return: Junior Colton Graham of Polson, senior Marcus Wittman of Billings Central and senior Kellen Detrick of Havre. Hardin said goodbye to 47.1 points per game from all-staters Famous Lefthand, Peyton Good Luck, Trae Hugs and Cayden Redfield, and senior-laden Butte Central loses all-stater Braden Harrington, second-team all-conference standout Luke Heaphy and honorable-mention honoree Jared Simkins. The state semifinalists also were hit hard, with Livingston losing scoring machine Brendon Johnson and Browning bidding adieu to prolific scorer Riley Spoonhunter and fellow all-stater Justin Burd.

• Can Hardin continue its glory runs? Before sharing the title in March with a 23-0 record, the Bulldogs fell to Billings Central in 2019 in the championship and won the crown in 2018, also against Southeastern A rival Central. Lefthand accounted for 23.8 points a game, and Hugs (13.1), Redfield (11.2) and Good Luck (10.2) also averaged in double figures. The Bulldogs always have star players in the pipeline, though.

• Don't be surprised if the Browning Runnin' Indians make a run in the state tournament after finishing 18-5 overall and 9-1 in the Northwestern A. Though conference MVP Spoonhunter and his 20.1 points per game are a major loss, along with Burd and all-conference honoree Deion Madplume, Browning has plenty of firepower back in senior Blayne DeRoche, a second-team all-conference star, and senior Cody Carlson, who was honorable mention. DeRoche averaged 10.5 points and a team-high 9.7 rebounds per game, and Carlson was third on the team in assists with 29 for coach of the year Daniel Connelly.

• Whoever survives the Billings Central-Hardin showdowns is always a contender, and that could be true for the Rams again this year coming off a 13-10 mark and despite losing second-leading scorer Gabriel Penha Dos Santos (11.1 ppg). Their hopes start with Wittman, who averaged 11.6 points and 3.3 rebounds per game. Central also returns honorable-mention all-conference honorees Brock Blatter (7.5/4.5), a junior, and Malachi Stewart (7.9/4.6), a senior, and they add transfer Nick Pasquarello, a Montana Tech golf signee who was honorable mention all-conference at Laurel a year ago after averaging 9.7 points per game.

• A year ago, the Southwestern A was the state's most competitive conference, with champion Butte Central (20-4) in a three-way logjam atop the league with Hamilton (16-5) and Frenchtown (19-5), all with 8-2 conference records. But all three were clobbered by graduation, as was Corvallis. Who's ready to fill the void? Maybe Dillon, which returns its two best players in senior Cole Truman (10.9 ppg/5.1 rpg), who was second-team all-conference, and senior Jace Fitzgerald (9.2/4.5), who was honorable mention. The Beavers' major loss was leading scorer Justus Peterson (11.0/5.1). Hamilton does return honorable-mention pick Tyler Burrows (7.8/5.3), Frenchtown has second-team all-conference star Brandon Finley (10.4/4.1) and Corvallis boasts honorable mention pick Tanner Jessop (14.3/4.5).

• The Northeastern A was unusually mediocre a year ago, with only three all-state players. Detrick was a star at 16.2 points and 7.3 rebounds a year for Havre, and could be poised for an MVP season before heading off to Montana to play football. But the Blue Ponies must overcome the departures of first-team all-conference standout Mason Rismon (11.4/5.5) and second-team all-conference Jake Huston (11.5/3.6); they do return senior Josh Warp (9.4/2.7). Glendive could be an up-and comer with juniors Riley Basta, who was second-team all-conference, and Max Eaton and Taven Coon, who were honorable mention.

3: The number of returning all-state players in Class A boys basketball.

Preview to the 2020-21 winter sports seasons

Competition was delayed, but is set to begin the first weekend of January 2021.