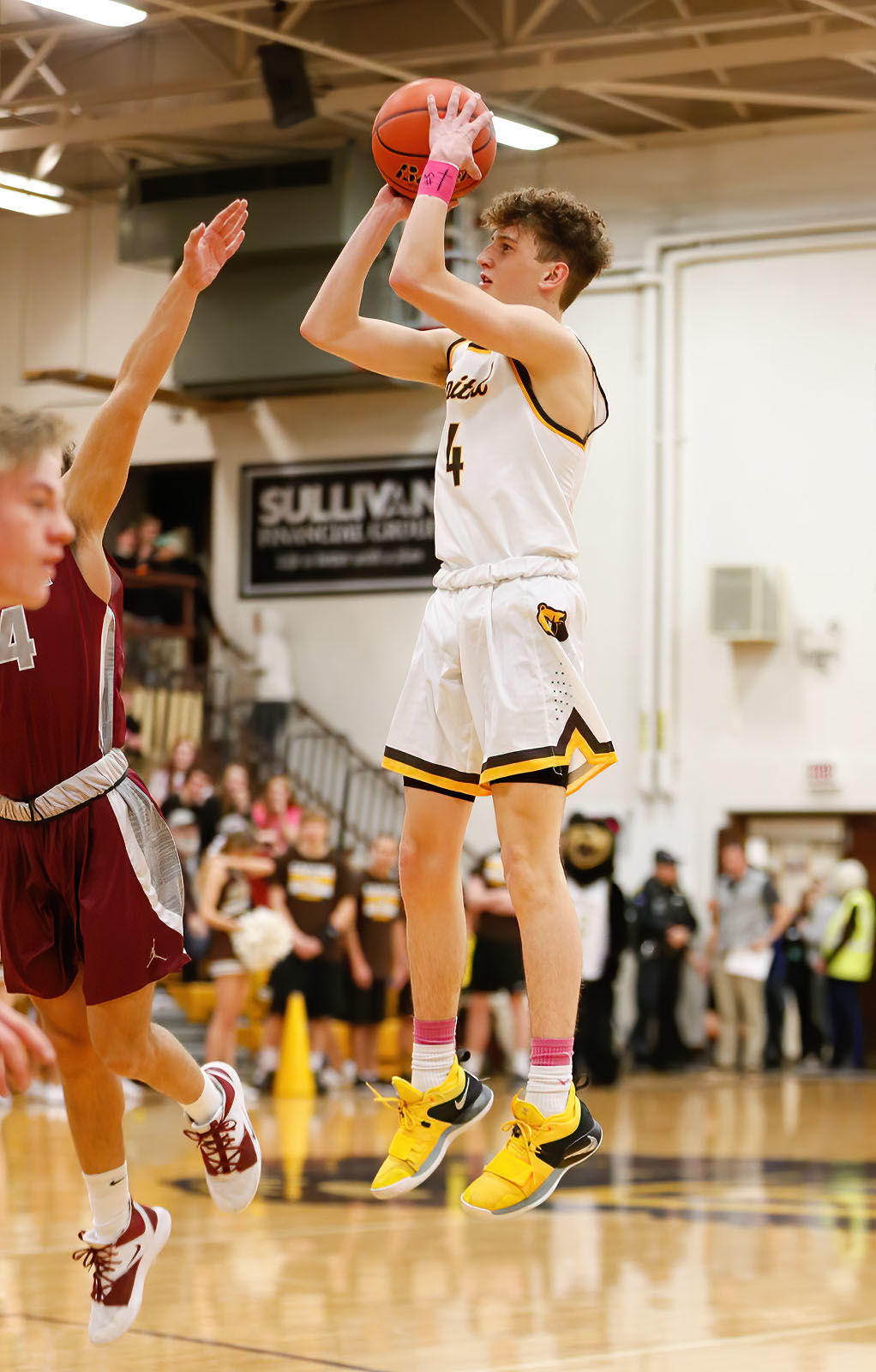 Helena Capital's Brayden Koch puts up a shot against Helena High on Friday night in the Bears Den. 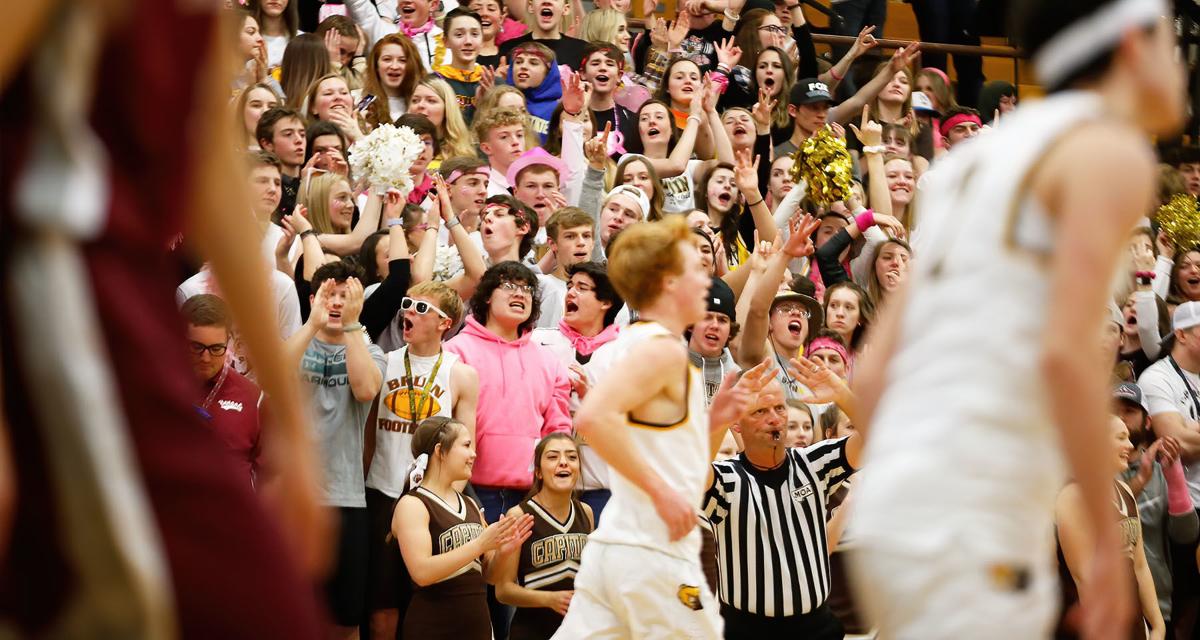 The student sections cheers at the crosstown rivalry game between Helena Capital and Helena High. 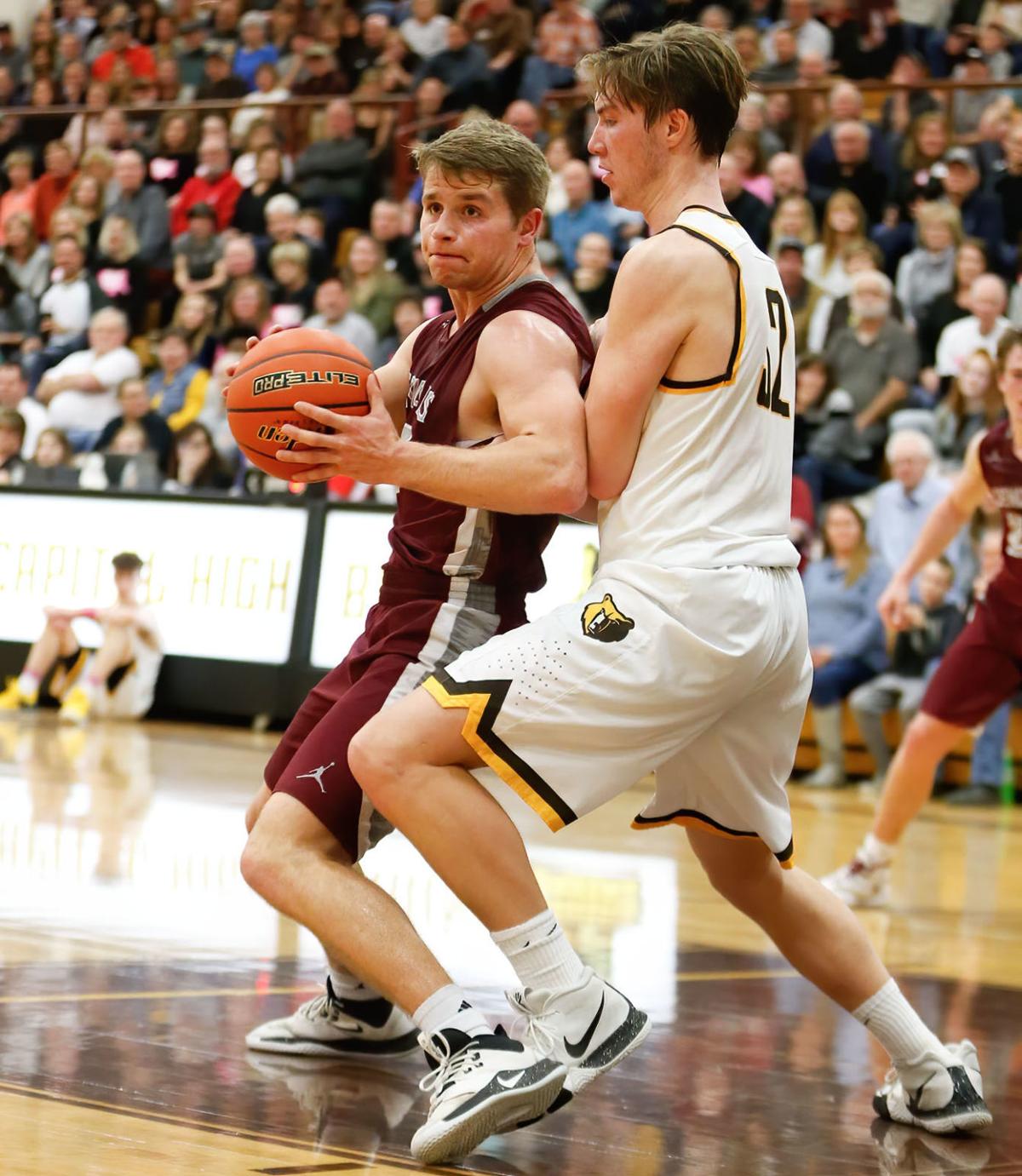 Hayden Ferguson posts up against against Shane Haller of Helena Capital on Friday night in the Bears Den. 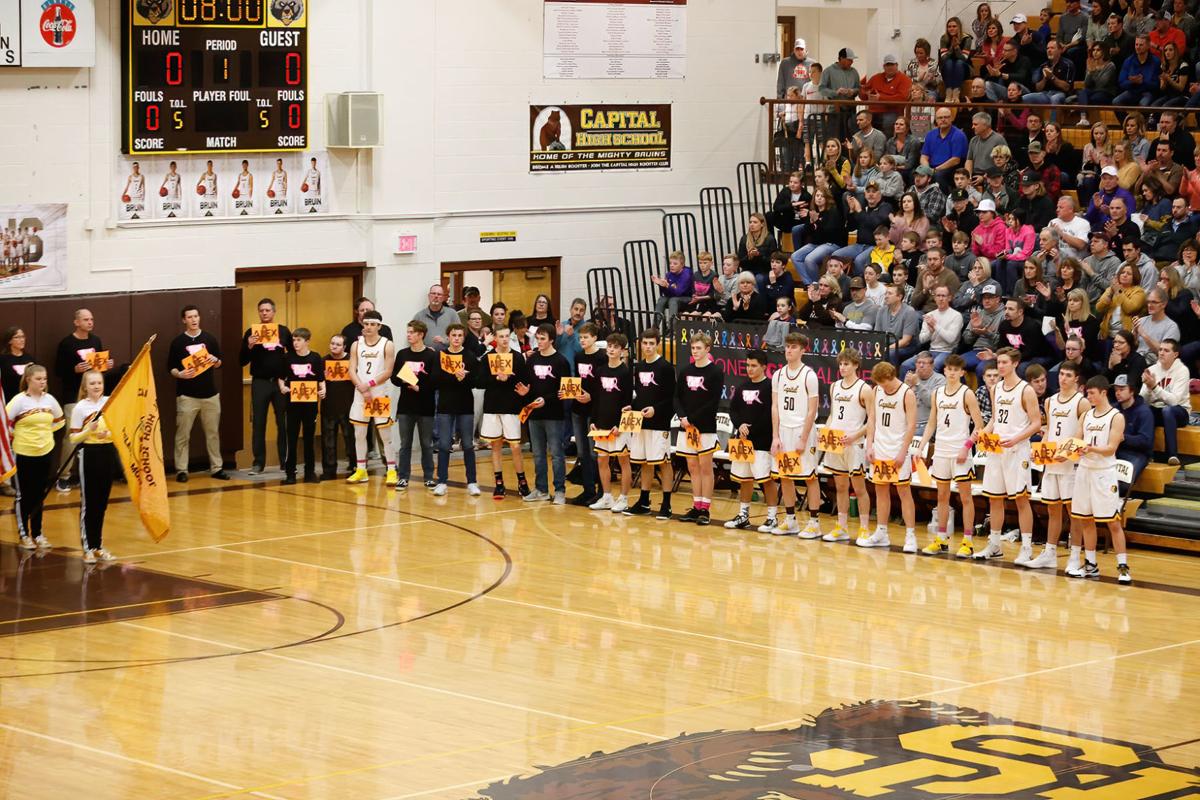 Players from Helena Capital and Helena High hold up signs to show support for Alex Barker.

Helena Capital's Brayden Koch puts up a shot against Helena High on Friday night in the Bears Den.

The student sections cheers at the crosstown rivalry game between Helena Capital and Helena High.

Hayden Ferguson posts up against against Shane Haller of Helena Capital on Friday night in the Bears Den.

Players from Helena Capital and Helena High hold up signs to show support for Alex Barker.

HELENA — Capital head coach Guy Almquist knew his Bruins were in for a fight Friday against crosstown rival Helena High and the question in his mind was, would they respond?

After Helena High ripped off a 6-0 run in the fourth quarter and tied the game on a Hayden Ferguson hook shot with 4:40 left, he would get his answer, which was exactly the one he wanted.

Shane Haller quickly scored to give the Bruins the lead again and soon after, sophomore Brayden Koch buried a 3-pointer, sparking an 18-5 run and leading to a 56-43 Capital victory.

"We knew this was going to be a grinder," Almquist said. "And I have been waiting to see if we could win one, and we weren't our best tonight, but in the end we stayed aggressive and in this kind of game you have to do that and that's one of the lessons that we learned tonight."

For Koch, who led the Bruins with 16 points, big shots are becoming the norm and his timely 3-ball was reminiscent of a late make against Missoula Sentinel less than a week ago.

"Brayden stayed confident and he has every right to be," Almquist said. "We love when he is shooting those shots. If we can penetrate and kick to him, we feel pretty good about it."

"My teammates believe in me, so I just shoot the ball," Koch said. "It was a big moment for our team. After they tied it, we knew we just needed to relax, not turn the ball over as much and just play together."

But in a crosstown rivalry game with the scored tied in the fourth quarter, that can be easier said than done.

Yet, time and time again, the Bruins found a way to get stops — and scores when they needed them.

One such bucket came when senior Trevor Swanson knifed in and was able to put the ball in off the glass for two. Shortly after, with Capital ahead 47-40, he stepped in and took a charge, costing Helena a key possession.

"That felt so good," Swanson said. "Parker (Johnston) and I were just screaming in each other's faces. It couldn't have been better."

The final margin may have been 13 points, but the contest was much closer than that as Helena (3-6) showed no fear against third-ranked Capital (7-2). Dexter Tedesco splashed an early 3-pointer and four points from Ferguson inside the paint had the Bengals in front 9-4 in the opening stanza.

Ferguson follows a Tedesco three with a board and scoop. 9-4. pic.twitter.com/A8EcNVStph

Helena's defense also made things tough on the Bruins offense, except Koch couldn't be held down. He scored nine in the first and matched a 3-pointer by Bridger Grovom to give Capital a 15-11 lead.

"He's special," Almquist said of Koch. "He's not afraid. Some of the other guys were a little hyped or whatever. Brayden was ready to roll."

In the second, Ferguson continued to keep Helena in it with a 3-point play as Logan Brown was sidelined with three fouls. Tedesco also hit twice from deep before five points late from Malachi Syvrud, including a corner trey at the halftime buzzer, made it 28-24 Capital at the break.

Malachi Syvrud buries a trey at the buzzer! 28-24 Bruins lead at the half. #mtscores pic.twitter.com/4j0eBjrUax

"Give a lot of credit to Helena High, I was really impressed by them," Almquist said. "(Hayden) Ferguson and (Logan) Brown, I would be in any fox hole with those two. They are great competitors and coach Day had them well prepared."

The fast-paced affair, gave way to a grind in the third quarter. Ferguson and Shane Haller traded baskets inside and despite the Bruins pushing the lead seven at one point, Helena trailed by just four entering the fourth.

Then, two hoops from Ferguson, sandwiched between a steal and score from Kaden Huot, tied the score at 38-38 with 4:40 left on the clock.

A hoop from Haller put Capital back in the lead, then Koch hit what proved to be the dagger.

"It's not the first big shot for him," Almquist said. "And it won't be the last."

"I was proud of the effort by the boys," Helena head coach Brandon Day said. "They played their hearts out and if we can just cut out some of the mental mistakes, we will be alright."

Capital had four scorers reach double digits led by Koch with 16. Syvrud finished with 13 points on a 5-of-6 effort from the field, while Grovom added 11 and Haller pitched in with 10 points and five boards.

"We know how good Malachi is," Almquist said. "He was hurt at the beginning of the season and it has taken him some time, but we just kept telling him, 'We know who you are.' And he picked a good night to show it."

Now, at the midway point in their season and fresh off wins over previously unbeaten Missoula Sentinel and crosstown rival Helena, the Bruins are hitting their stride and eying a late run this March.

"These guys believe they can play with the best teams in the state," Almquist said. "And if they keep working hard, I think we will have a chance there in the end."

Crosstown triumph: Helena Capital finally gets the Helena High monkey off its back

HELENA — Some wins just mean more than others and for the Helena Capital girls basketball team, nothing mattered more than beating Helena High.