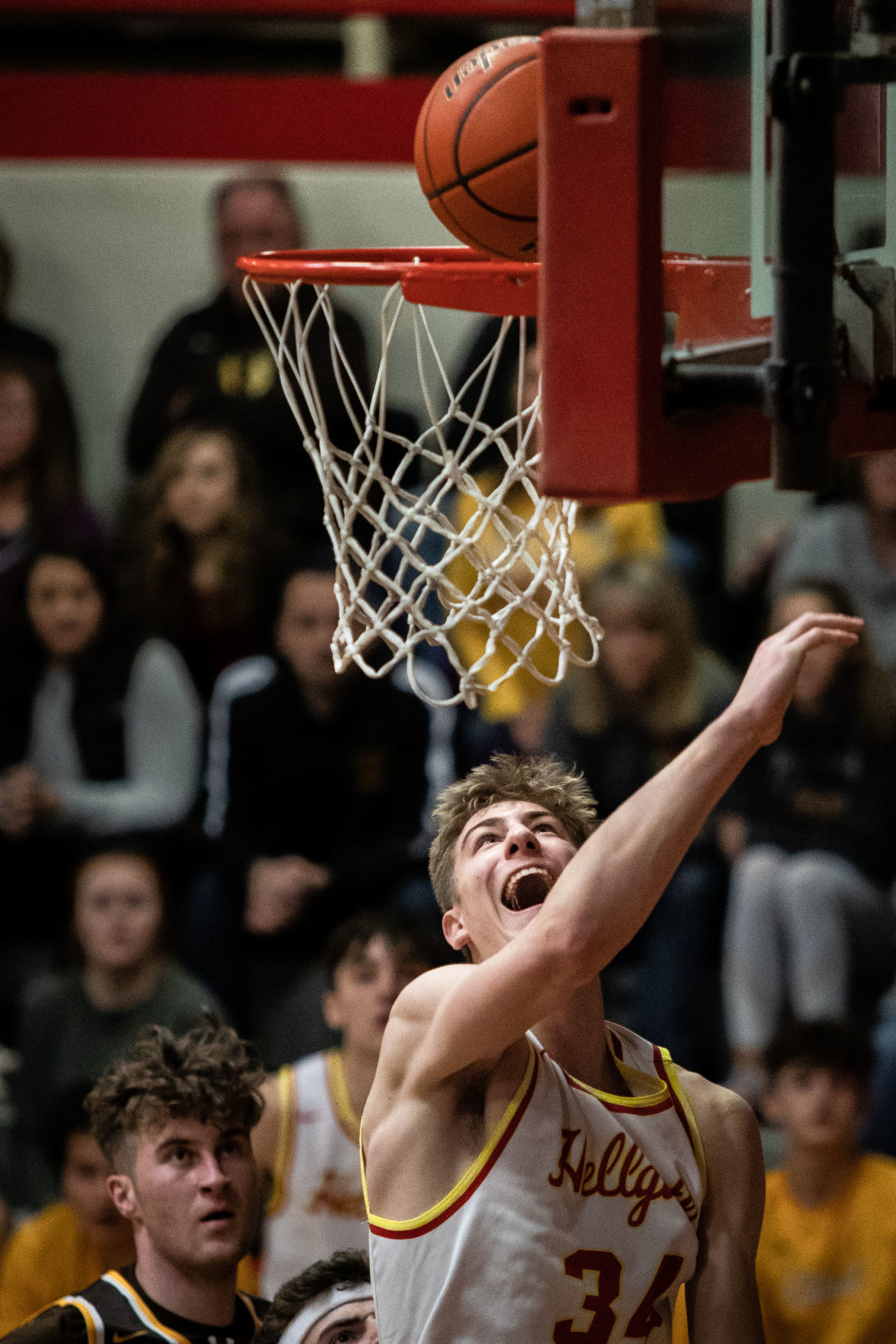 Hellgate senior center Abe Johnson grins as he watches his second-period dunk go through the net during a win over Helena Capital in January. Johnson has committed to the United States Military Academy to play basketball. 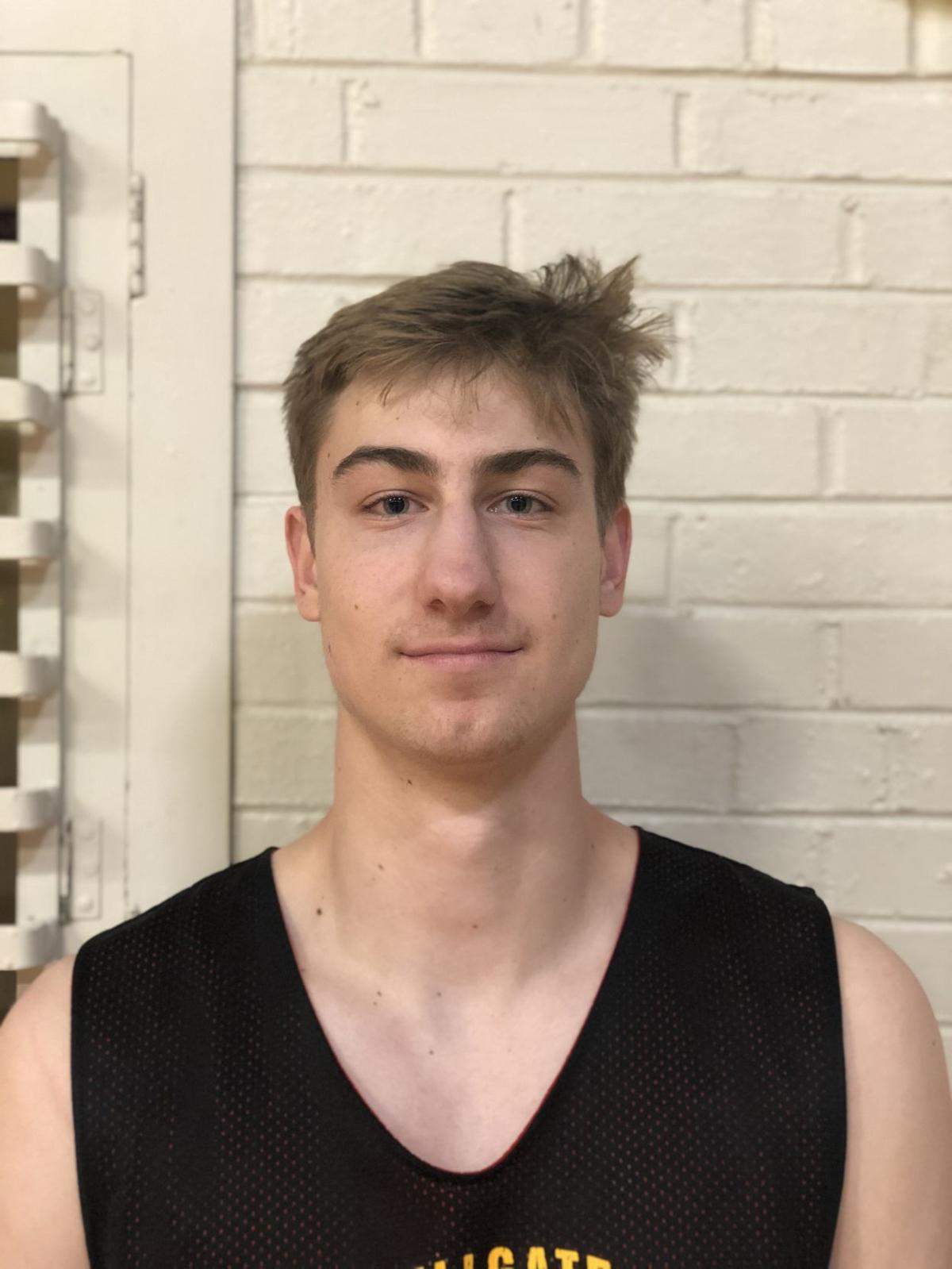 MISSOULA — Abe Johnson’s ride to soccer practice took him through the gamut of life in Namibia’s capital city in a short drive.

There were shanty towns with open sewage where the poorest of the poor lived in Windhoek, the capital of the south African country. Then came the wealthier neighborhoods where more well-off people resided. That was followed by the presidential palace, an opulent place with sprawling grounds protected by fences.

The Hellgate senior spent 2016 living abroad with his family during his final semester of eighth grade and the start of his freshman year of high school. It was an eye-opening experience to a different way of life, even down to the small detail of drinking bottled water because tap water wasn’t considered safe.

“It’s a lot different than the United States,” Johnson said. “It was a good experience, but it made me appreciate a lot of the things we have here after living over there. We take so many things for granted.”

The time in Namibia resonated with Abe, even more than when his family lived in South Africa for a year when he was in third grade. It started him on a path to where he’ll now be fulfilling multiple dreams on a national level.

The 6-foot-8 Knights basketball player will be combining his desire to serve his country with the more recent opportunity to play Division I sports when he heads off to the United States Military Academy.

“Personally, for me, going to college, I want to have some purpose,” Johnson said. “I want to have something driving me every day. I think having that goal of keeping what we hold dear in America, keeping that in my mind while I’m playing basketball and doing my studies is a great thing to drive me forward.”

Long before Johnson lived in Africa, his parents spent time there. His father, Jesse Johnson, and mother, Julie Johnson, entered the Peace Corps after college. They both ended up in the African country of Malawi, where they first met each other.

When they had kids, they thought living abroad would be a way to expose them to a different lifestyle. So Jesse, a computer science professor at the University of Montana, accepted a pair of opportunities to teach in Africa.

Abe set his sights on the United States Military Academy when he got back from the second trip. Playing Division I sports was far from a realistic thought.

“It’s somewhere I really wanted to go because I value structure,” Johnson said. “I thought about applying there, athletics aside, because it’s a great school academically. I also liked that they force you into athletics in some form, like intramurals.”

The application process for the United State Military Academy is no joke. It’s rigorous and time demanding, taking Johnson close to five months to complete.

He had to fill out a detailed West Point application and go through nerve-wracking interviews. Johnson also had to get a Congressional nomination, which he got from Rep. Greg Gianforte.

“It was intimidating at first because you think big, scary majors, generals, officers,” Johnson said. “But I talked to so many people when I was out there. I could tell they were kind people that really cared about my future, not just basketball.”

Johnson will be the first basketball player or student that Hellgate coach Jeff Hays has go on to a service academy. It’s not surprising to the 12th-year head coach that Johnson would go that path as he’s gotten to know him.

Hays has witnessed Johnson’s commitment, seeing him grow leaps and bounds as a basketball player and thrive in the classroom. He hasn’t had issues with Johnson being prepared or following directions on the court. Then there’s Johnson’s ability to problem solve on his own, a likely benefit from being out of his comfort zone living in foreign countries.

Those are all qualities that are not only pertinent but necessary to being in the military.

“Military kids, they’re different. They’re a different breed,” Hays said. “He’s disciplined. He’s going to have to be tough. And he is a tough kid. Again, it’s a different level of toughness. I think he has the personality that fits that lifestyle.”

Being a cadet at the United States Military Academy also requires a five-year commitment after college that wipes out student loans. It’s not something that’s fazed Johnson, who's still undecided on his major, post-graduation path in the military and how long he may stay in after his required commitment.

“You can tell he's not deterred," Hays said. "He’s talked about some pretty mature things. You see he appreciates what the United States has to offer, especially after living overseas.”

Before Johnson could even commit to the United States Military Academy, schools came calling for basketball.

Soccer was Johnson’s primary sport until the past couple years. He had played basketball starting in sixth grade because people saw how tall he was and asked him to join, although he never considered himself good at it.

Johnson liked soccer better and played on a club team in Africa, trying to find a home since he didn’t have any friends there when he moved. But playing sports there was a different experience than he had in the United States.

“In America, you see communities, parents, families really involved in sports,” Johnson said. “You didn’t see that much over there. I enjoyed the team of guys, but we didn’t have the togetherness you get over here.”

Johnson kept up with sports when he returned from Africa, finding more of a brotherhood with his teammates. He played soccer in the fall and basketball in the winter, landing on Hellgate’s freshman hoops team for the second half of ninth grade.

Johnson didn’t think highly of his basketball skills, but he worked his way onto the varsity team as a sophomore. After that season, Frontier Conference schools approached him at a tournament in Helena. Then Div. III and Div. II schools became interested in him when Hellgate went to a tournament in Spokane prior to the AAU circuit that summer.

“That’s when I started committing myself to basketball,” Johnson said.

Hays had seen Johnson’s potential and had sent emails to basketball schools in the Patriot League and Ivy League. It was there that Hays thought Johnson, who has a 4.0 grade-point average, could play Division I basketball while attending a prestigious academic school.

“He told me his dream school was Army because of his background,” Hays said. “I told him I think you can do it, I think you can play there if you work hard. He thought I was crazy.”

Johnson continued to grow, sprouting from 6-foot-3 as a freshman to 6-foot-6 to now to nearly 6-foot-9. He's also improved upon his raw basketball skills, increasing his strength and confidence on his way to developing as a true interior presence who led Class AA in rebounds, his forte, and blocks for the state runner-up team as a junior.

Army asked Hays for more tape on Johnson after that season. Johnson visited the school for an unofficial visit and camp in August and an official visit prior to the season.

When Johnson got offered by Army, he already had been heavily recruited by Carroll College. There was some thought he was going to stay in the state.

Johnson couldn't turn down Army when there was a Division I basketball offer to pair with his desire to serve his country.

It’s an opportunity where Johnson is a world away yet right at home.

“I’m just extremely lucky and grateful to have this opportunity,” Johnson said. “I never would have fathomed this. It’s still surreal to me to be doing it. I’m super excited to be doing it and grow more excited every day.”