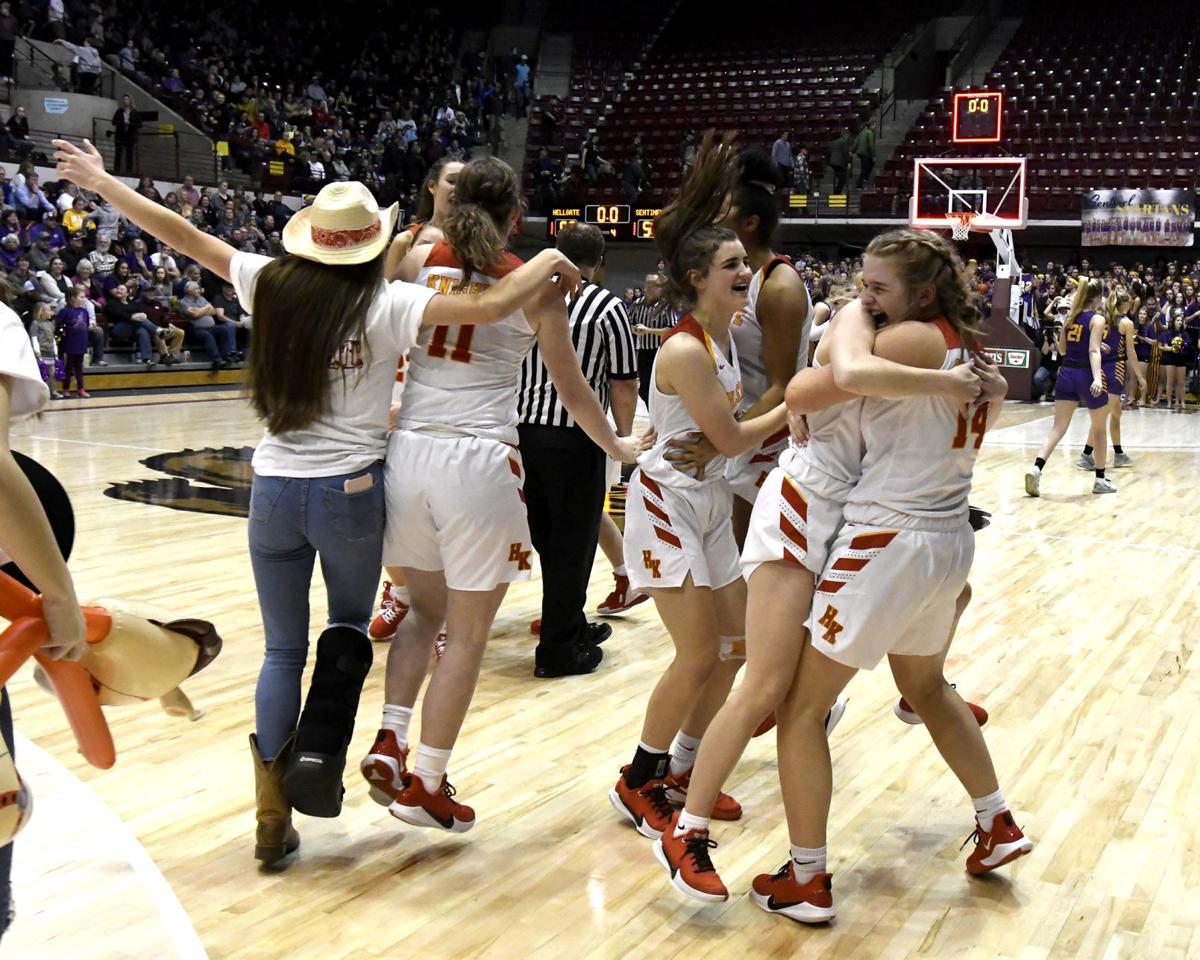 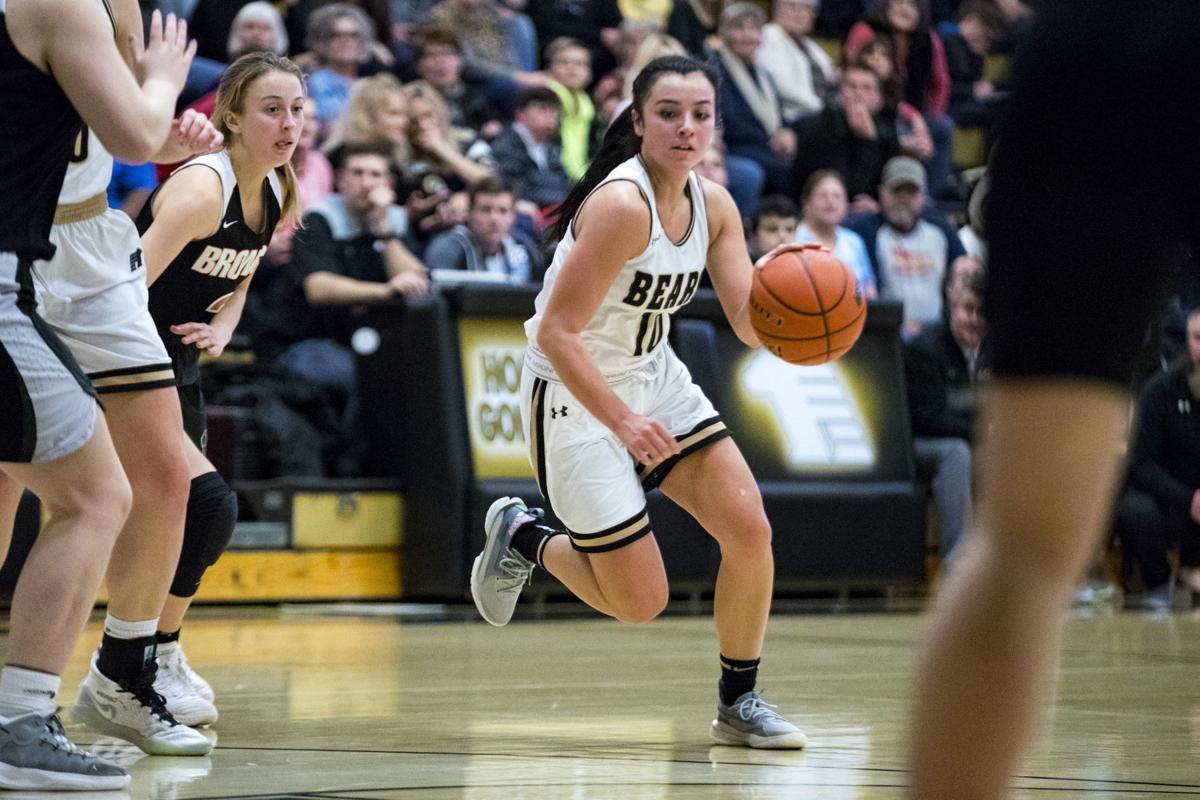 Editor's note: Full Court Press will be continually updated through the night as results arrive.

• Parker Johnston led four players in double figures and No. 3 Helena Capital had little trouble with Kalispell Flathead 68-39 after a slow start. The Bruins trailed 8-7 after the first quarter but got untracked with 16 points in the second quarter and 24 in the third for a 49-29 lead. Malachi Syvrud and Brayden Koch each had 12 points and Bridger Grovom 10 for Capital. Joston Cripe's 14 lead the Braves.

• Michael Schwarz scored 15 points -- including the key 3-pointer with 48.7 seconds remaining -- and Drew Engellant added 14 as Kalispell Glacier surprised Helena 56-55 in overtime. Logan Brown and Hayden Ferguson each scored 12 points and Kaden Huot chipped in with 11 for Helena. The Wolfpack outscored the Bengals 3-2 in the extra session. Helena led by 10 points at halftime and was still up by six entering the fourth quarter.

• Rollie Worster scored 22 points, Cam LaRance added 19 and top-ranked Missoula Hellgate raced to a 14-point first-quarter week en route to a convincing 73-45 victory over No. 4 Missoula Sentinel at Dahlberg Arena. Abe Johnson contributed 11 points and Josh Wade 10 for the Knights (11-0). Hellgate has now defeated the Nos. 2, 3 and 4 teams in the state, all by double digits. TJ Rausch led the Spartans with 10 points.

• Senior swingman Famous Lefthand hit for 27 points and top-ranked and unbeaten Hardin rallied to win at Laurel 71-62. The 14-0 Bulldogs trailed 33-28 at intermission. Hardin, however, used a 17-7 spurt during the third quarter to take the lead 45-40 going into the final period. Besides Lefthand's big night, Trae Hugs added 14 points to the Bulldogs' scoring column, followed by Cayden Redfield's 12. Junior forward/post Colter Bales of Laurel also finished with 27 points. Teammate Eli Aby tossed in 14.

• Columbia Falls won a 54-53 home squeaker over Whitefish. William Dyon led the Wildcats with 15 points, followed by Dillon Shipp and Allec Knapton each with 10.

• Caden Holgate had 18 points and Kyle Hotvedt 13 for Manhattan in a 55-51 double-overtime win over Townsend. Devon Zeadow had 21 points and 10 rebounds, and Nate Hill added 12 points for the Bulldogs. Trey Hoveland scored 10 points and Jesus Garcia added four steals for Townsend. The teams were tied 40-all after regulation and 47-all after the first OT.

• Lance St. Germaine scored 19 points, 16 coming during a pivotal fourth-quarter surge, as Wolf Point rallied to beat Class A Sidney 51-46. The Wolves trailed 35-26 heading into the final period. St. Germaine drilled a 3-pointer and also shot 7 of 8 from the foul line as Wolf Point closed the game with a 25-11 spurt. The game's top scorer was Sidney's Cooper McGlothlin with 23 points.

• JT Baer poured in 28 points and nine players from Colstrip -- No. 3 in the 406mtsports.com rankings -- players scored in the Colts' 57-30 trouncing of Baker. Colstrip led 20-10 at halftime before revving up the offense in the second half, scoring 22 points in the fourth quarter alone.

• Journey Emerson led with 22 points, Rocco McMakin added 20 and Tanyon Whistling Elk had 19 as No. 6 Lame Deer ran away from Northern Cheyenne 86-32. The Morning Stars led 41-23 at halftime and then outscored the Eagles 29-6 in the third quarter.

• Arlee jumped out to a 20-9 lead after the first quarter and never led up in the 80-43 win over Charlo. Cody Tanner led Arlee with 18 points, Levi Fullerton added 16 points and Billy Fisher had 13. Dawson DuMont paced Charlo with 11 points.

• Eureka pulled out a 63-61 home win over St. Ignatius. AJ Pacella scored 21 points for the Lions. Zoran LaFrombois paced the Bulldogs with 21 points.

• Cody Tanner was tops with 18 points, Levi Fullerton added 16, Billy Fisher had 13 and Joseph Parisian 10 as Arlee coasted past Charlo 80-43. Dawson DuMont scored 11 for the Vikings.

• Brendan Wagner hit eight 3-pointers on the way to 32 points to lead Whitehall over Big Timber 54-46. Hayden Hoaglund added 13 for the Trojans. For the Herders, Dawson Lavarell led with 23 points.

• Corbin Lonebear and Zarek Jones scored 23 points apiece for Dodson in an 83-41 runaway over Turner. Lonebear scored 19 points in the first half as Dodson took a 48-19 lead. Jones had all of his points in the first three quarters. Shawn Ball added 10 points for Dodson. Shane Kimmel led the Tornadoes with 16 points, nine in the second quarter.

• Reese Elliot, Ethan Bell and Oscar Pula combined for 43 points as No. 7 Chinook triumphed at home against Chester-Joplin-Inverness 63-37. Elliot topped the scoring column with 18 points, followed by Bell (13) and Pula (12). Nine Sugarbeaters scored against C-J-I. Chinook was in control 38-19 at halftime.

• Tucker Johnstone and Garrett McMillen led the way with 15 points each as Park City pulled away in the fourth quarter for a 55-42 win over Bridger. The Panthers led 34-32 entering the final eight minutes. Jake Kallevig scored 13 and Jace Weimer 12 for the Scouts.

• Nicholas Day led the way with 19 points, Andrew Sanford scored 13 and Caleb Ball added nine to carry St. Regis over Noxon 63-49. The Tigers led by 12 over the Red Devils at halftime.

• Thomas Young scored 12 points and Marcus Rutherford added 10 as Heart Butte held off a late rally and downed Dutton-Brady 48-47. The Warriors trailed 38-30 entering the fourth quarter. The Diamondbacks received 19 points from Kellan Doheny, 11 from Rylan Doheny and 10 from Tyce Erickson.

• Mackenzie Rask scored 16 points and 11 players found their way in the scoring column as Billings West -- No. 4 in the 406mtsports.com rankings -- powered past Billings Senior 60-47 behind a strong second quarter. The Golden Bears led by a point after one quarter but rode a 19-12 second quarter to an eight-point lead. Maddie Albrecht scored nine points for West. Senior received 12 points from Olivia LaBeau and nine from Brenna Linse.

• Bailee Sayler scored 24 points and No. 2 Missoula Hellgate outlasted No. 3 Missoula Sentinel in overtime in front of 4,000 spectators at Dahlberg Arena. Addy Heaphy's 3-pointer in overtime tied it at 51-51 in overtime and Sayler hit two free throws to put the Knights ahead for good. Lexi Deden scored 15 points, and Challis Westwater and Jayden Salisburg had 13 apiece for the Spartans.

• Aubrey Rademacher hit a 3-point basket at the buzzer and scored 18 points to help Kalispell Glacier rally from a double-digit deficit to surprise Helena 51-49. Ellie Keller's 3-pointer had tied the game for Glacier with 13 seconds remaining. Kylie Lantz scored 10 points to lead the Bengals.

• Savannah Toms tallied 19 points and Karsen Murphy helped with 17 to lead Glendive over Class B Glasgow 53-36. The Red Devils led 19-6 after one quarter and kept the Scotties at arm's length the rest of the way.

• Kieaunna DeRoche was high scorer with 19 points, Regan Clairmont added 12 and Lexi Wirz had 10 to power Ronan over Polson 68-18. The Maidens bolted to a 20-3 lead after one quarter and built the margin to 30 at halftime. Alexia Kienitz scored six to lead the Pirates.

• Lani Walker had the hot hand with 26 points and top-ranked Missoula Loyola moved to 13-0 with a 64-30 trouncing of Florence. The Breakers trailed by three points after one quarter but outscored the Falcons 13-4 over the next eight minutes to take a six-point halftime lead and they pulled away over the final 16 minutes. Sam Clevenger added 14 points and Syd Koppang 11 for Loyola. Florence received 11 points from Emma Stensrud and nine from Kylie Kovatch.

• Brenna Rouane led a balanced offense with 10 points and No. 9 Columbus whipped Joliet 49-17. The Cougars led by only four after one quarter but went on a 15-5 run in the second quarter to pull away. Molly Hamilton scored nine points for Columbus, which had eight players in the scoring column. Merrin Schwend scored five points for the J-Hawks.

• Lindsey Hein led the way with 19 points and Jordan Cookman added 11 as No. 5 Forsyth breezed past Shepherd 50-33. Reese Pederson scored eight for the Dogies, who led by only six at halftime. Aubrey Allison's 11 points led the Fillies.

• Bailey Finn hit six 3-pointers on the way to 27 points to lead No. 2 Big Timber over No. 4 Whitehall 74-48. Emily Cooley and Alyssa Boshart had 10 points each, Hailee Brandon had nine and Ella Holman and Darby Johnston each had eight.

• Draya Wacker scored 22 points to lead four players in double figures and No. 5 Melstone improved to 13-0 with a 67-7 trouncing of Jordan. Kaigea Raskelley scored 15 points, Koye Rindal added 12 -- all from 3-point land -- and Kelsey Thurston had 10 for the Longhorns, who led 12-2 after one quarter but blew it open with a 24-2 second quarter and 17-0 shutout in the third.

• Sydney Labatte led with 17 points, Baylee Davidson had 16 and Sydney Dethman chipped in with 15 as Froid-Lake jumped to an early lead and rolled over Plentywood 54-42. The Redhawks led 19-10 after one quarter, saw the margin dip to three by halftime, and rebuilt the margin to 15 entering the final eight minutes.

• Haylie Conradsen poured in 25 point to power Savage over Culbertson 47-35. The Warriors trailed by one point after a quarter and led by a point at halftime before extending the third to six after three quarters. Reghan Prevost added nine points for Savage. Makena Hauge led Culbertson with 15.

• Alaina Spoon was tops with 16 points and Taquoya Racine contributed 14 to help Heart Butte fend off Dutton-Brady 40-32. The Warriors led by a point at halftime and slowly increased the lead in the second half. Jazmyn Coffman topped Dutton-Brady with 11 points.

• Katie Smith had 11 points, and Kiylee Kellis and Aubrey Picard added 10 apiece for Bainville in a 45-35 conquest of Lustre Christian. The Bulldogs led by nine at halftime at kept the Lions at arm's length the rest of the way. Tiana Whitmus scored 11 points and Amber Reddig added eight for Lustre.

• Hannah Monroe led all scorers with 18 points and Erica Ramsey had 12 to lead Valier over Sunburst 64-47. Loni Orcutt chipped in with nine points for the Panthers. For the Refiners, Jeena Alborano scored 15 points and Annika Furr added 14.

• Carlie Wilson hit a breakaway layup with less than 10 seconds to play to lead Lone Peak to a 35-34 squeaker over Shields Valley. Maddie Cone blocked a layup with two seconds left to seal the win. Cone and Kate King led Lone Peak with nine points each. Jaela Jenkins led the Rebels with 10 points.

• No. 2-ranked Belt won at Centerville 74-16 behind the game-high 20 points of Kolby Pimperton. She knocked down five 3-pointers for the Huskies. Teammate Shelby Paulson chipped in with 13 points. Belt was up 43-12 at halftime, and outscored the Miners 12-0 during the final quarter. Emily Lindgren scored six points for Centerville.

• Melony Fetter pumped in 23 points to almost single-handedly lead Dodson to a 43-37 win over Turner, which rallied from a three-point deficit after three quarters behind 12 fourth-quarter points from Fetter. Shyann Krass scored 19 points for the Tornadoes.

• Aspen Giese led with 16 points, Megan Clark had 12 and McKenzie Clark 10 in top-ranked Fort Benton's 56-42 triumph over Hays-Lodgepole. The Longhorns (13-0) led 25-20 at halftime before pulling away. Ella Messerly scored 15 points and Nashone Shambo added 10 for the Thunderbirds.

WHITEHALL — Whitehall’s Brendan Wagner could not be stopped on Friday.