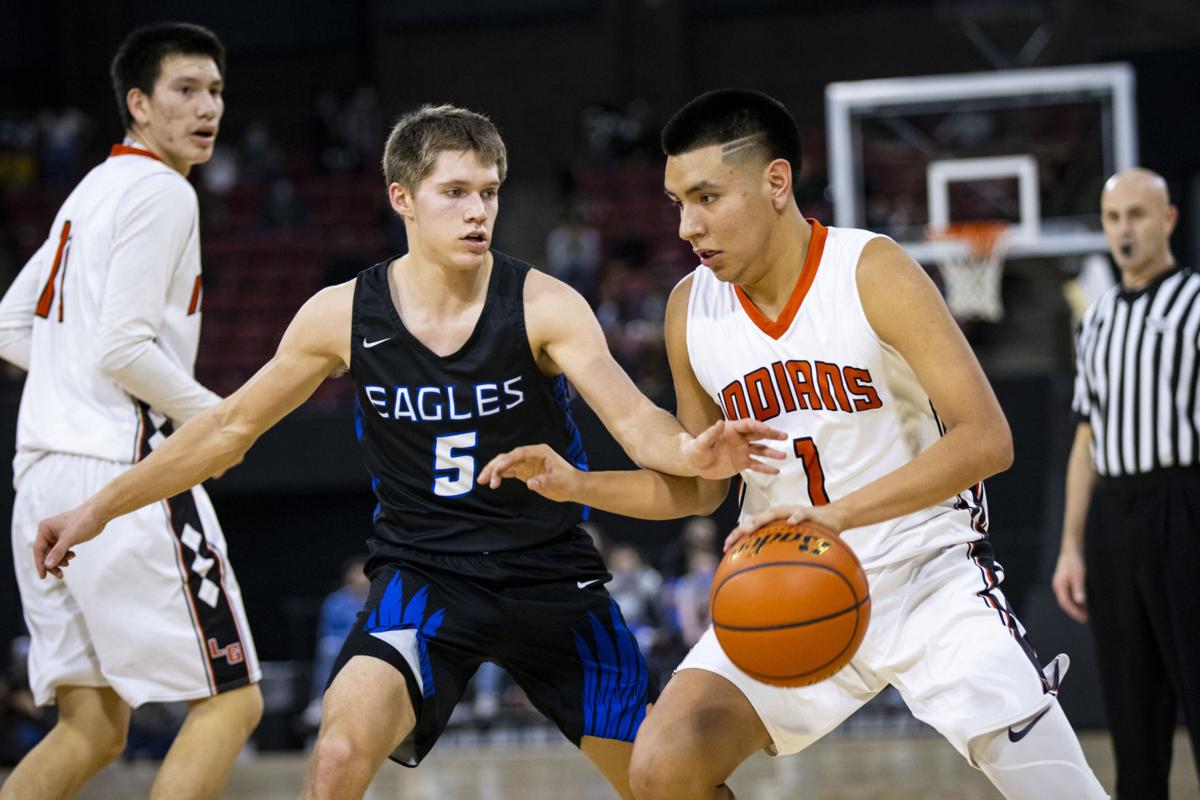 Lodge Grass' Damon Gros Ventre dribbles as Fairfield's Gavin Mills defends during their game at First Interstate Arena at MetraPark on Feb. 13. The Indians and Eagles are defending State B co-champions. 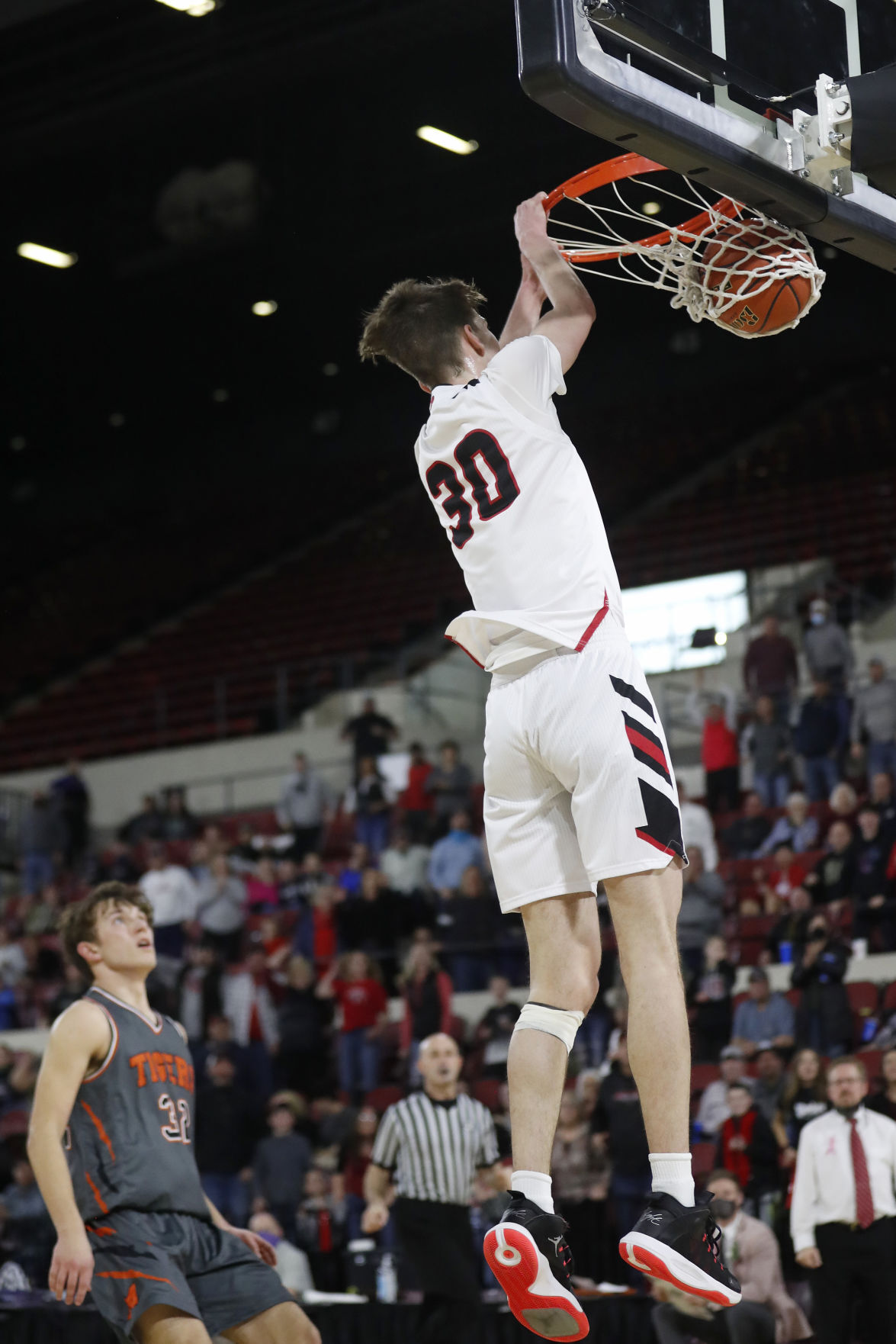 Huntley Project’s Noah Bouchard dunks against Manhattan in the Southern B Divisional title game on Saturday at First Interstate Arena at MetraPark. Project will face defending State B co-champion Fairfield in the first round of this week's state tournament. 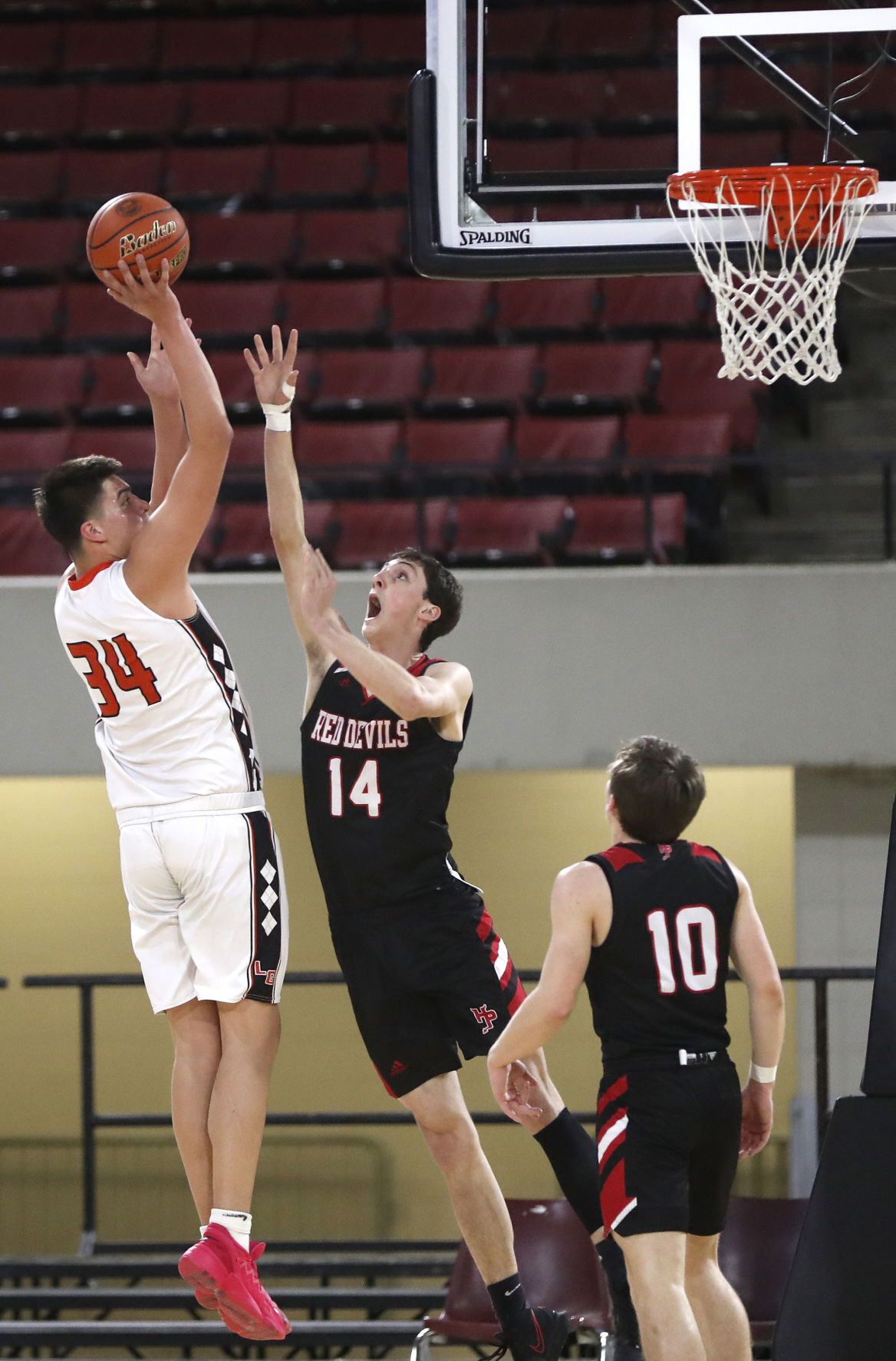 Lodge Grass’s Jadence Archilta attempts a shot as Huntley Project's Jake Fox defends and Tim Rose looks on in a Southern B Divisional semifinal game Friday at First Interstate Arena at MetraPark. Project has gone 2-1 against Lodge Grass this season. 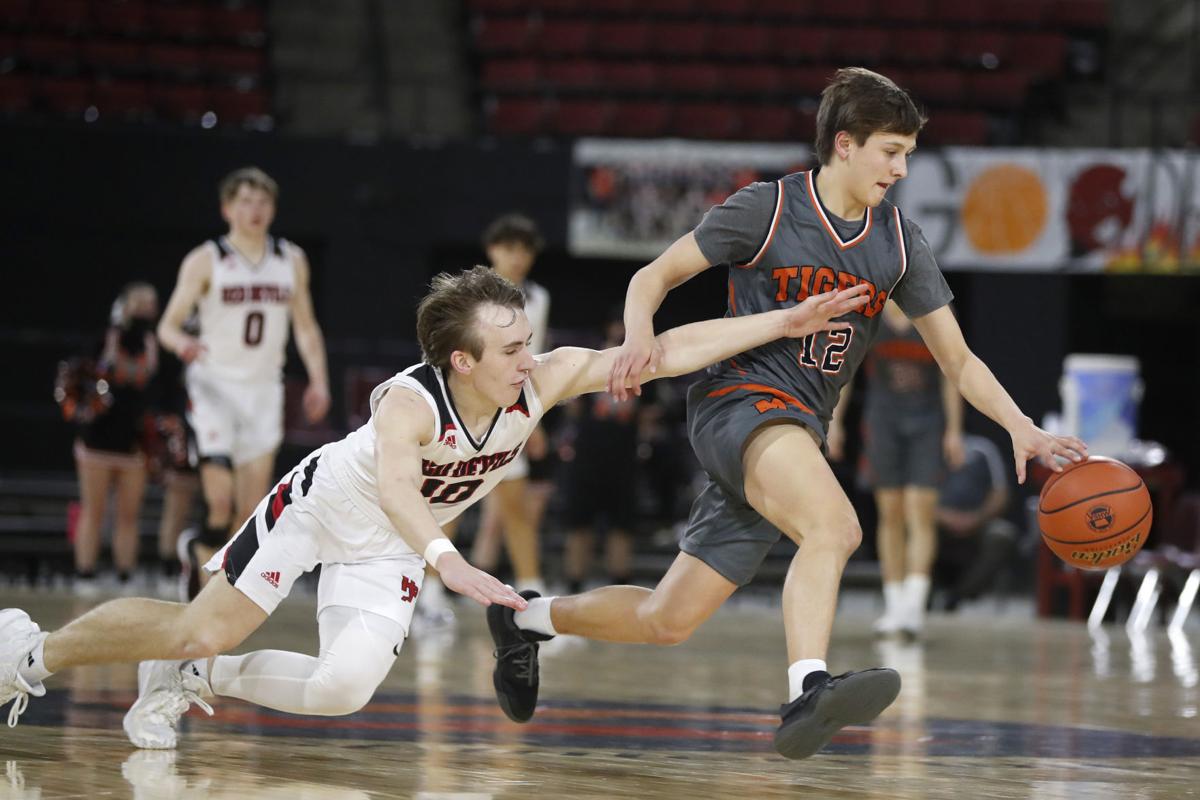 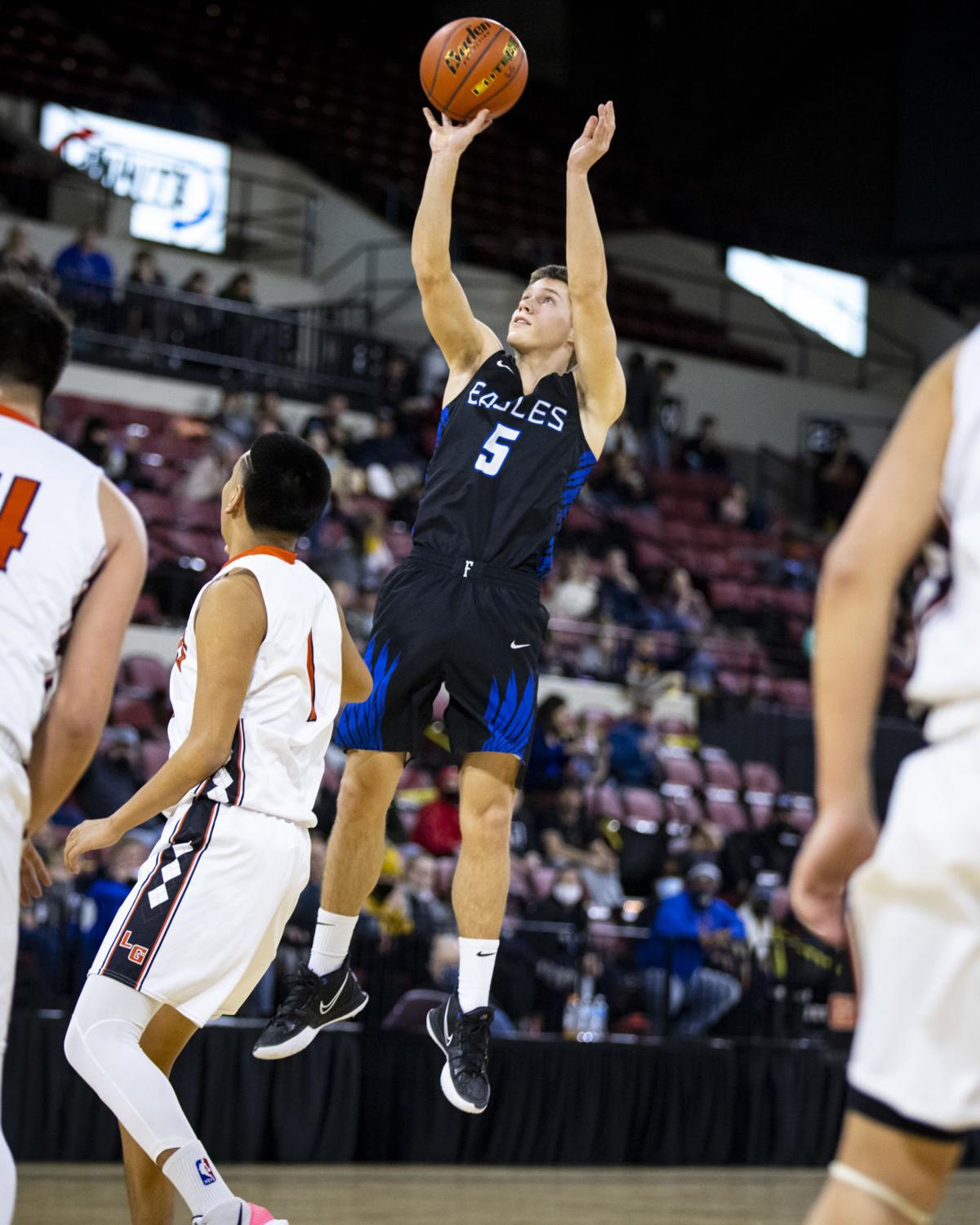 Fairfield's Gavin Mills shoots over Lodge Grass' Damon Gros Ventre during their game at First Interstate Arena at MetraPark on Feb. 13. The Eagles and Indians will face off in the State B semifinals if they win their first-round games.

Lodge Grass' Damon Gros Ventre dribbles as Fairfield's Gavin Mills defends during their game at First Interstate Arena at MetraPark on Feb. 13. The Indians and Eagles are defending State B co-champions.

Fairfield's Gavin Mills shoots over Lodge Grass' Damon Gros Ventre during their game at First Interstate Arena at MetraPark on Feb. 13. The Eagles and Indians will face off in the State B semifinals if they win their first-round games.

BILLINGS — Every state basketball tournament features eight hopeful teams, but there’s often a substantial gap between the top seeds and the bottom. Not so at this week’s Class B state boys basketball tournament, which will be played from Wednesday through Saturday at First Interstate Arena at MetraPark and appears to be wide open.

Defending state co-champions Fairfield and Lodge Grass hope to get the championship chance that was taken away from them last year by COVID-19, but at least one of those two will fall short of the title game this time.

The Montana High School Association is allowing a maximum of 500 spectators per team for each State B game. Tickets can be purchased on MetraPark.com. Lodge Grass’ tickets were sold out early Monday because the team’s ticket buying page was hacked.

• Lodge Grass returned all of its starters from last year’s team and has been No. 1 in the 406mtsports.com Class B rankings all season. Yet the Indians are the Southern B’s third seed because they lost to No. 3 Huntley Project in the divisional semifinals.

• Project is responsible for Lodge Grass’ only on-court Class B losses this season. The Indians opened the season with a 66-42 win over Colstrip but later had to forfeit because some of their players were academically ineligible. They won 66-58 at Project in their next game, lost to Class A rival Hardin the game after that, then won seven straight (including an overtime win over Hardin). Lodge Grass lost to Project 64-52 on Feb. 2 but was playing without all-state junior Damon Gros Ventre, who returned two games later and helped the Indians beat Fairfield in triple overtime. While No. 5 Fairfield showed it could compete with its fellow defending co-champion, Project proved it could beat a fully healthy Lodge Grass with a 75-60 divisional semifinal victory on Friday. The Red Devils followed that up with a 43-39 Southern B title loss to No. 2 Manhattan.

• All eight of Fairfield’s losses were to good teams, and most of those games were close. No. 4 Shelby blew the Eagles out twice, including 50-33 in Saturday’s Northern B Divisional title game, but Fairfield beat the Coyotes 57-56 on Jan. 29 and lost to them 71-70 in double OT on Feb. 27.

• Like the North and South, Western B teams beat up on each other all season. Thompson Falls’ up-and-down season includes an 80-71 win over No. 9 Florence-Carlton on Feb. 20. That loss is one of only two for the Falcons against Class B opponents so far this season.

• On Wednesday, Deer Lodge will play Manhattan at 9 a.m. and Shelby will take on Thompson Falls at 11 a.m. The winners of those two games will face off in the semifinals. Lodge Grass will face Florence at 5:30 p.m. Wednesday, while Project and Fairfield will play the final first-round game at 7:30. A Lodge Grass win would set up a rematch with Project or Fairfield in the semis.

Coverage of the Class B state basketball tournament Mar. 10-13, 2021 from First Interstate Bank Arena at MetraPark in Billings.