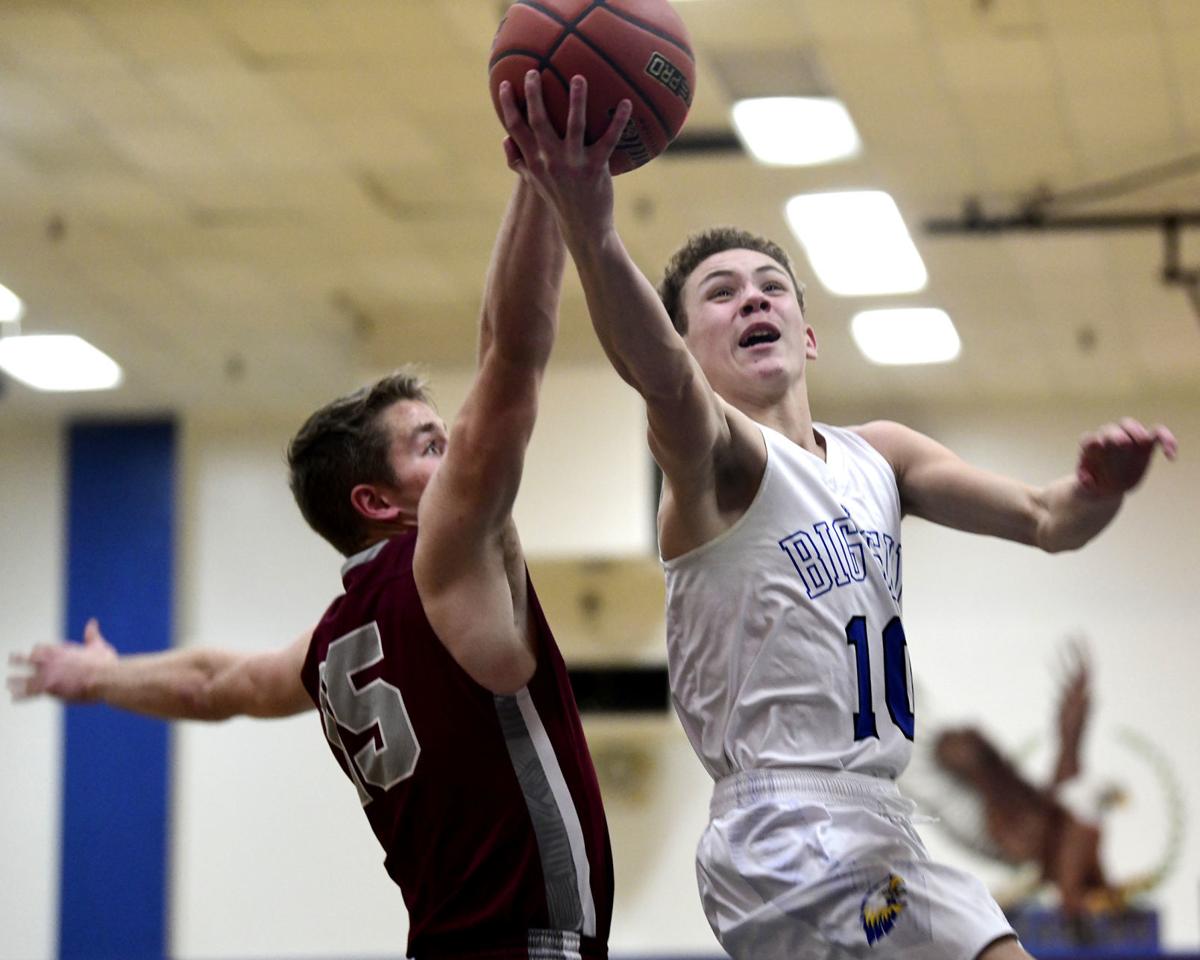 Missoula Big Sky's Tre Reed, right, drives to the basket past Helena's Hayden Ferguson during their game at Big Sky High School on Thursday night. The Bengals defeated the Eagles, 54-48. 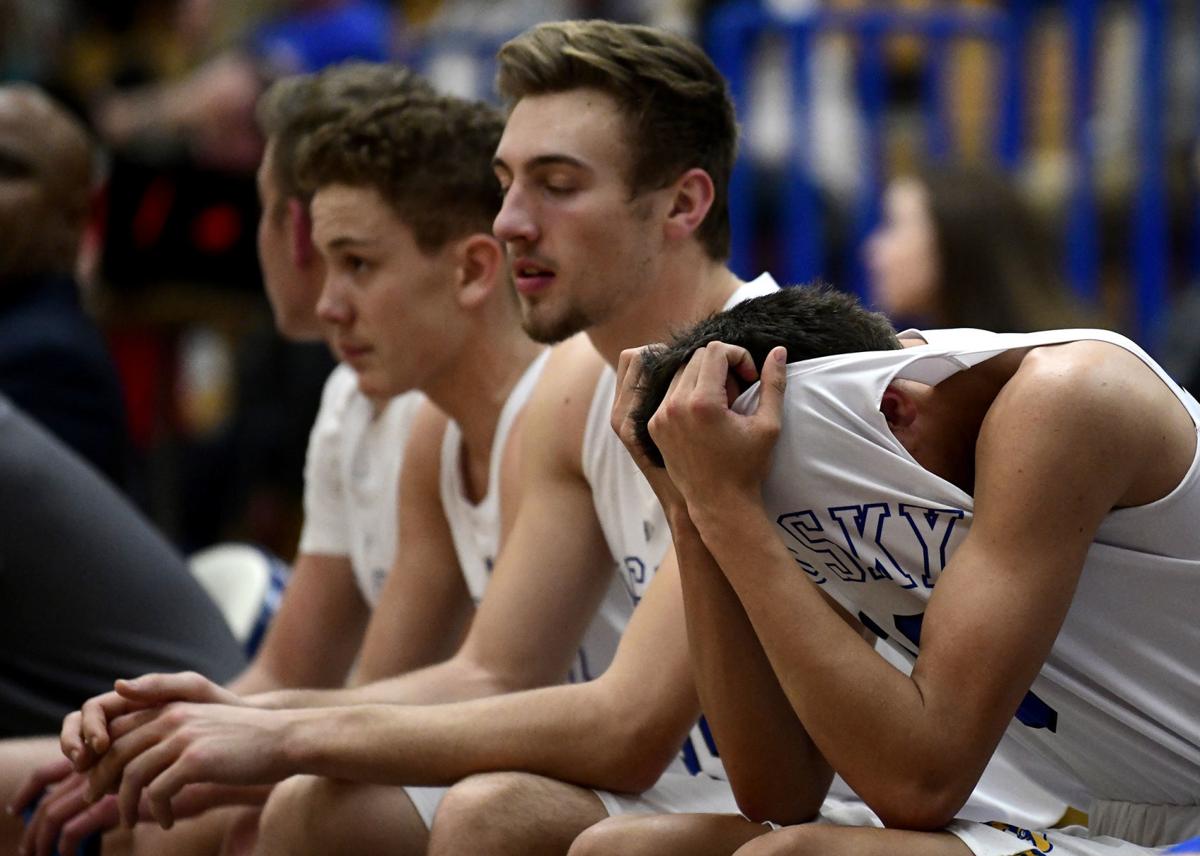 Big Sky's Caden Bateman, right, puts his head inside his jersey after joking around with his teammates on the bench. 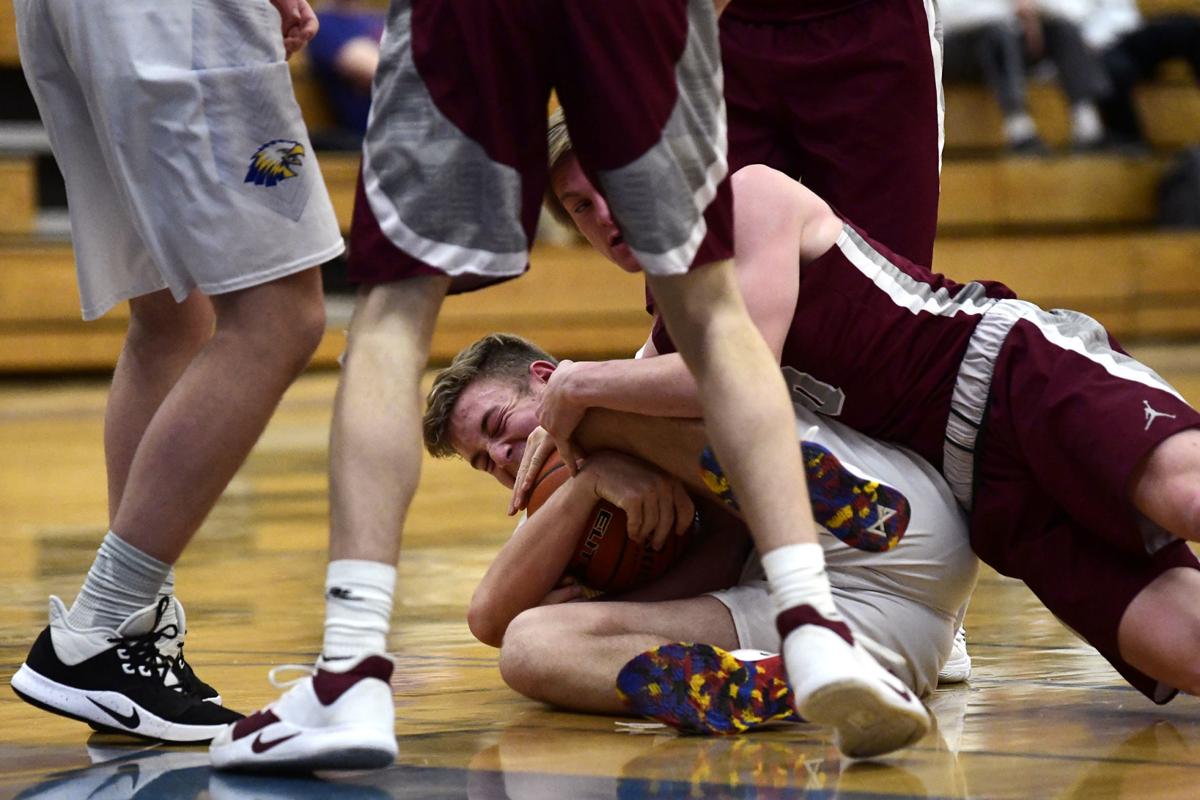 Missoula Big Sky's Tre Reed, right, drives to the basket past Helena's Hayden Ferguson during their game at Big Sky High School on Thursday night. The Bengals defeated the Eagles, 54-48.

Big Sky's Caden Bateman, right, puts his head inside his jersey after joking around with his teammates on the bench.

MISSOULA — Helena High senior Hayden Ferguson is a versatile football player, lining up at running back, wide receiver, tight end, quarterback and linebacker, helping him land a preferred walk-on offer from Montana State, although he hasn’t made a college decision yet.

The 6-foot-1 forward did a bit of everything on the basketball court, too, as he broke out of a slump to score a season-high 22 points Thursday to help the Bengals bounce back from a halftime deficit to earn a 54-48 victory over winless Big Sky in Missoula.

“Hayden played with a ton of energy,” Helena coach Brandon Day said. “He had been struggling, not shooting his typical field goal percentage. It was nice to have him break out. He picked it up big time tonight. I’m hoping that’s something that continues.”

Ferguson scored 20 of his 22 points in the second half, including 14 points in a third quarter that featured seven lead changes and five ties. He caught Big Sky napping to score on a trio of backdoor layups and converted an and-1 off a basket in transition.

Ferguson kept his presence up on the interior in the fourth quarter, driving inside to score all three of the Bengals’ field goals in the final frame. He gave Helena the lead for good when he broke a 40-40 tie by driving inside, hitting a layup through a foul and making the free throw.

Big Sky pulled within 46-44 with 2:25 to play, but Ferguson split a pair of free throws after that as he finished 6 of 8 at the charity stripe. Helena made 22 of 33 free throws, including 14 of 18 in the fourth quarter to stave off Big Sky. Logan Brown made seven free throws, giving him 16 points,

“We came out slow, but we picked up our energy,” Ferguson said. “Our defense was doing good, but we couldn’t get anything going offensively. We picked up our intensity and energy and knew we needed to step up and beat this team, especially with next week being crosstown, so it’s nice to get a win under our belt and get momentum.”

Ferguson locked down the middle with Big Sky senior Everett Fred dealing with early foul trouble that kept him sidelined for large portions of the game. It was a loss for Big Sky because Fred found some easy scoring opportunities when he was in, finishing with eight points.

Despite the loss, Big Sky coach Ryan Hansen saw positive signs as his team tries to win for the first time this season. It’s been a hectic early ride for the first-year head coach, whose wife, Jordan Hansen, the Big Sky girls basketball coach, had twins Wednesday.

“I had to apologize to the guys tonight because I didn’t scout these as well as I would’ve liked,” Hansen said before returning to the hospital. “But these guys didn’t give up. That was the first game in a while that we were right there. It feels like we’re getting better and closer every game. It’s going to happen.”