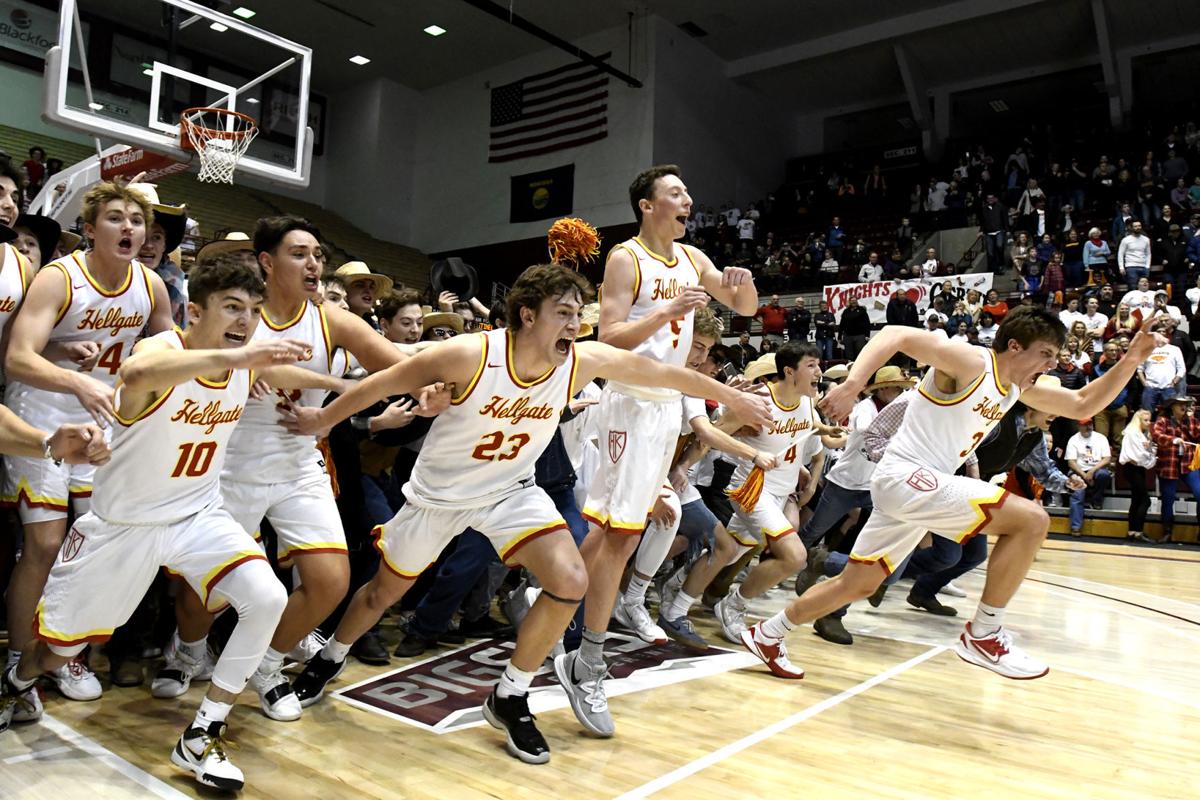 Missoula Hellgate storms the court at Dahlberg Arena after beating Missoula Sentinel in a crosstown game this year. The delayed basketball season will start in Missoula this weekend. 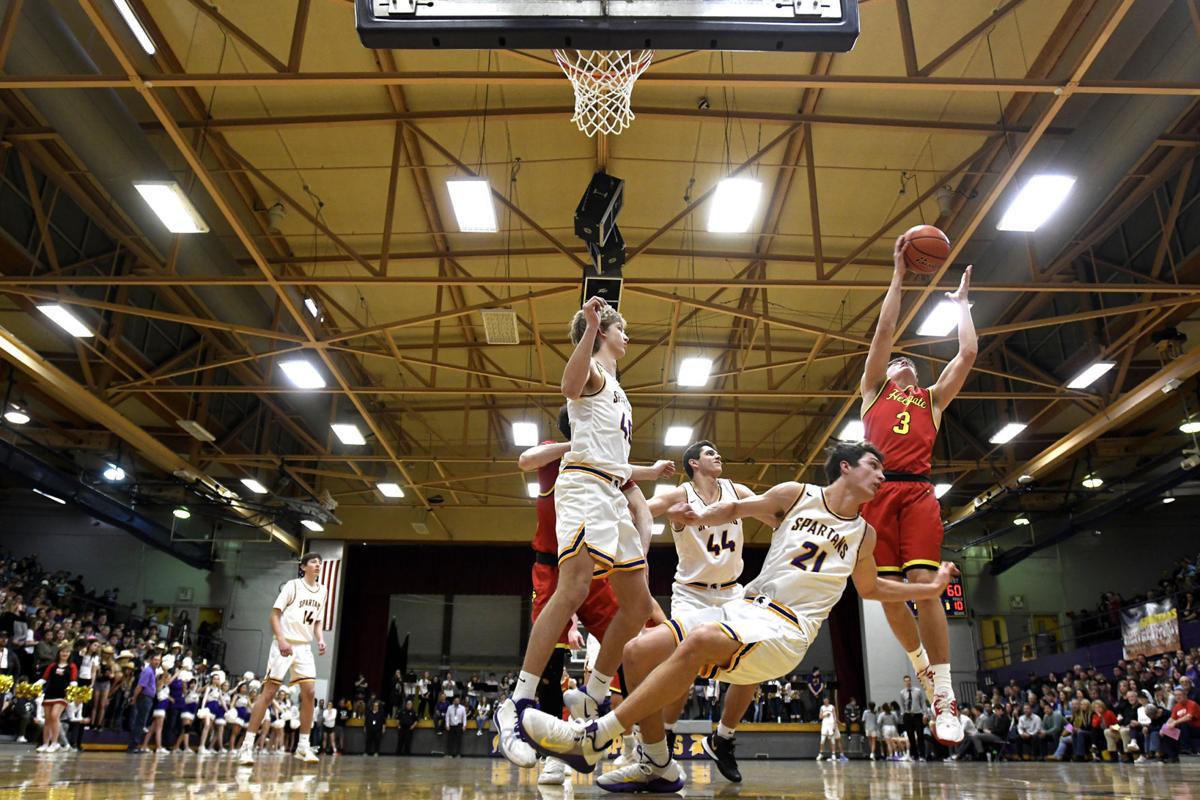 A Hellgate player reaches for a rebound during a crosstown boys basketball game last season.

Missoula Hellgate storms the court at Dahlberg Arena after beating Missoula Sentinel in a crosstown game this year. The delayed basketball season will start in Missoula this weekend.

A Hellgate player reaches for a rebound during a crosstown boys basketball game last season.

MISSOULA — High school basketball is set to resume play this week in Missoula, nearly 10 months after tournaments were shuttered during the first days of the coronavirus pandemic.

Two spectators per student-athlete per team will be allowed at basketball games, which is a Missoula County Public Schools' decision, not a health department recommendation. No sub-varsity games will be played for two more weeks to see if cases spike as the holiday season concludes.

As the Billings Gazette and 406mtsports.com reported last week, in early December a letter was sent by a large group of Class AA superintendents asking the MHSA to consider pushing back winter sports, which are already starting about a month later than usual due to the pandemic, another two weeks to Jan. 18.

"We'll see how that works out and see if that's a good decision or we need to adjust as the season goes on," Doug Reisig, MHSA executive board vice president, told the Missoulian and 406mtsports.com in November. "That's one thing about the association that's really powerful is that they're in a constant, constant state of review.

In the most recent data set published by the Montana Department of Public Health and Human Services on Dec. 16, there have been 4,269 COVID-19 cases at schools at 521 different K-12 schools and 19 colleges and universities in Montana. Some cases have been connected to athletics and many fall sporting events were canceled or postponed due to either positive tests or out of an abundance of caution related to close contacts.

Cases did not spike as much as anticipated in Montana after Thanksgiving, but with Christmas and New Year's festivities underway, cases could still surge.

"(The MHSA) have made it very clear that they are continually evaluating the situation in our state," Dr. David Higgins of the Billings Clinic, who has been advising the MHSA executive board, said on Dec. 11. "I think they need to closely evaluate the situation here, evaluate the degree of community transmission and listen carefully to our health experts and public health officials."

While the MHSA has been cautious in many different areas, the organization was criticized by some this fall when it did not push Class AA football to the spring, despite support from county health officers in the state's largest counties and MCPS to do so.

Contact sports such as football, basketball and wrestling are also all deemed high-risk activities by the CDC due to physical closeness, team sizes and competition from different geographic areas — which is one reason Class AA schools are not playing non-conference games in any sport this year.

"The Montana High School Association, as I understand it, is a nonprofit entity. I think it's interesting that when local public health suggested to that entity that they not proceed as usual with contact sports when school reopened, that entity had the ability to overrule that," Missoula County Health Officer Ellen Leahy said to the Missoulian in October, answering a question regarding spectator changes at fall postseason events and the MHSA moving winter sports back.

While general sense says the more people in an enclosed environment, the more potential for virus transmission will be, school cases have been relatively low. That is one reason Montana K-12 schools are still open, albeit many in a hybrid model. Strict mask requirements and heavy sanitation in school buildings has also been a point of emphasis.

"One of the most consistent opinions I hold, my colleagues hold and I think our communities hold is that schools should be the last place we close," Nick Lawyer, a Clark Fork Valley Hospital physician’s assistant, told The Billings Gazette and 406mtsports.com earlier in December. "And if we have bars and restaurants or other public gathering places that are open and then schools are closed as a means of trying to reduce disease transmission, we're probably missing something in that equation, right?"

It will take years for peer-reviewed studies to fully understand how the coronavirus affected schools and sports teams. The disease seems to attack younger people less fiercely and much is still unknown about transmission.

One factor medical professionals are worried about right now, however, is spread among students outside of classrooms and extracurricular practices.

"They might do a great job of, you know, following the guidelines and then they all go when they climb in the car together and carpool home, right, or you know, immediately go out to the parking lot, stand in a big circle, take their masks off and chat for a while," Higgins said.

All said, basketball will go on mostly as usual, though there will be changes. Outside of the obvious spectator restrictions, having more properly ventilated gymnasiums and ensuring officials, coaches and bookkeepers are properly masked will help schools against disease spread and allow games to continue.

"We would just reiterate to high school sports and high school sports fans that if you can follow these basic guidelines and recommendations, it will make a difference," Lawyer said. "It will help keep (winter sports) open and running."

COVID-19 has hit Missoula Sentinel close to home, as new head coach Jason Maki is recovering from the disease. Several players also had it as well and the Spartan boys missed two weeks of practice.

That has changed practice plans and helps illustrate the issues and challenges coaches will have as the season begins.

"This is my 26th year coaching for me," Maki said. "And by far already the most bizarre."

Practices are different this year. Teams are trying to distance as much as possible and stagger practices. At Missoula Hellgate, for example, the sub-varsity is not working with the varsity to help allow the Knights to keep their circle as small as possible and reduce the number of potential contacts.

Taking temperatures before school starts is now the norm, as is a quick health screening. Being apart as much as possible during practices — even during team meetings during practice — has been a change, as has mask usage. Coaches are also stressing to players not to come to school or practice if they feel sick.

"We have had kids, not so much at the varsity level, but at the sub-varsity level, where we are saying, 'Stay away for a day or two and if things do not get better after that, you will need to get tested,'" Hellgate boys head coach Jeff Hays said Wednesday. "We're not toughing anything out."

"This year if they're sick, they're not going."

There might not be high school swimming in Missoula this season.