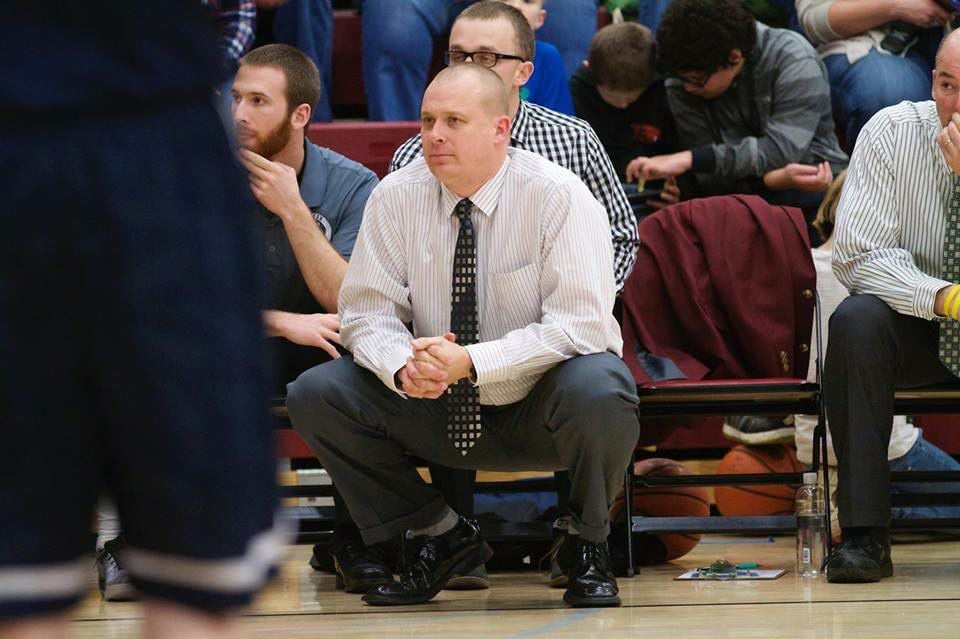 Newly hired Sentinel boys basketball coach Jason Maki squats while watching the action from the bench during a basketball game while coaching in Oregon. Maki was named the Spartans' coach earlier this month, replacing Jay Jagelski. 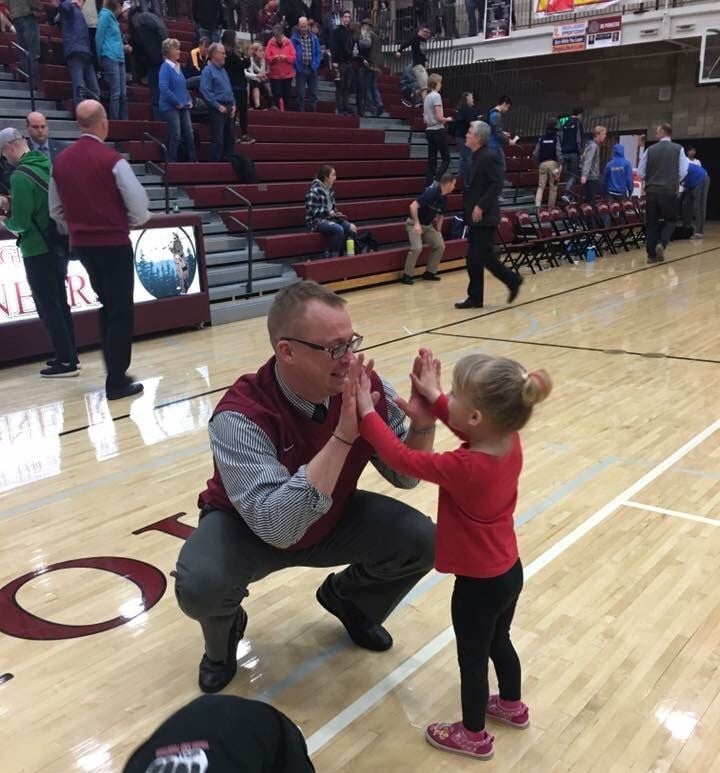 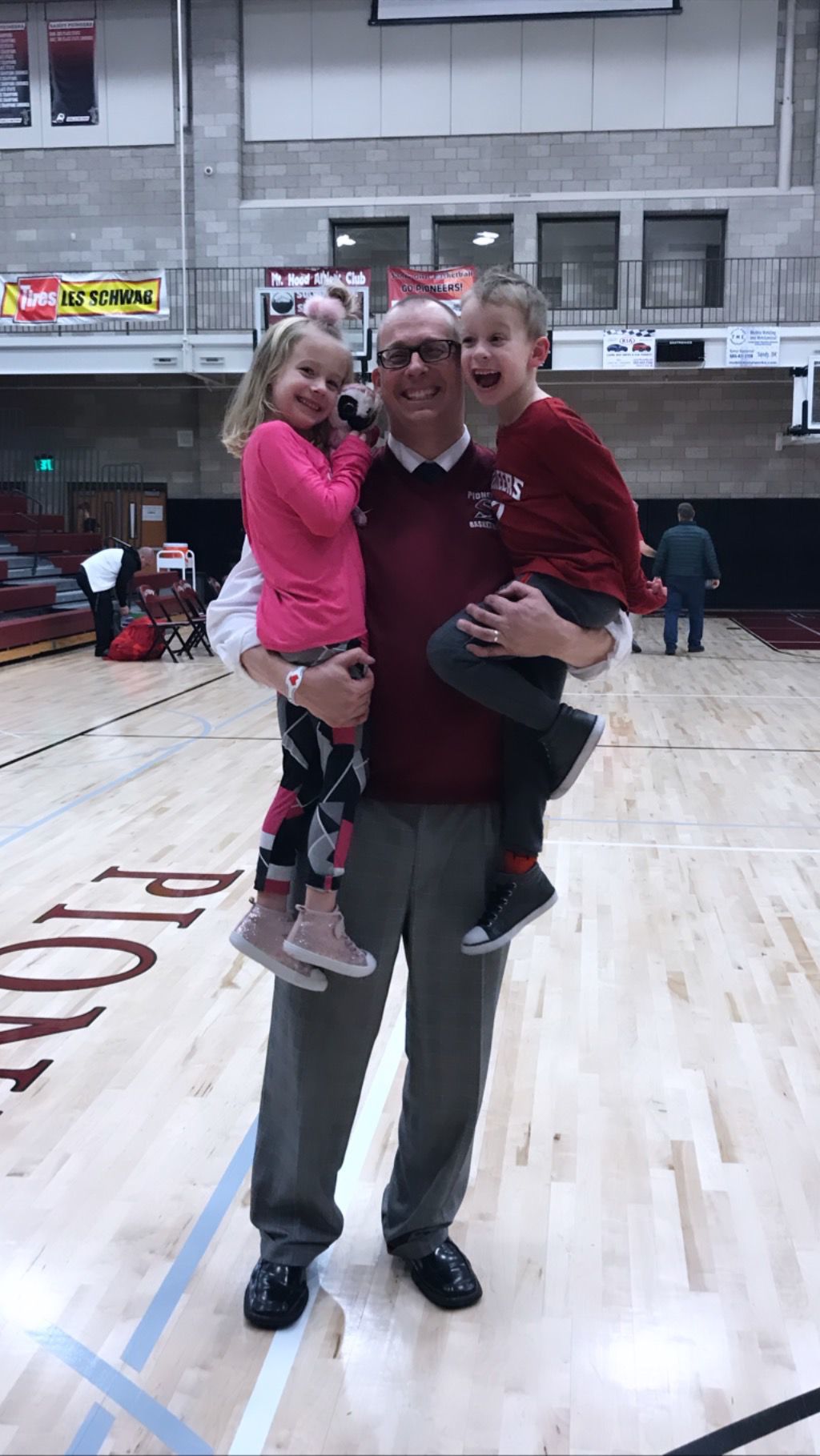 Newly hired Sentinel boys basketball coach Jason Maki squats while watching the action from the bench during a basketball game while coaching in Oregon. Maki was named the Spartans' coach earlier this month, replacing Jay Jagelski.

MISSOULA — Newly hired Missoula Sentinel boys basketball coach Jason Maki has taught physical education and social studies, but his return to coaching at his alma mater fits better in the subject of English.

“It’s pretty poetic that I’m back to coach the Spartans,” Maki said while waxing poetically about his time at Sentinel and looking ahead to his future back home in Missoula during a phone call from Oregon, where he’s coached high school basketball since 1995.

“The reaction has been amazing. All the messages and texts and calls, it’s almost overwhelming how cool it’s been. It’s been really, really neat. It’s a unique opportunity.”

Maki brings with him 25 years of experience despite being just 48 years old, having jumped into coaching right after his college playing days. In finding success, he became the all-time wins leader at Sandy High School, 30 minutes east of Portland, where he spent the past 12 seasons and was named the Northwest Conference coach of the year in March 2013.

Maki got his start in coaching at Beaverton High School, 15 minutes west of Portland, spending 13 years there before moving over to Sandy. He was the varsity head coach the final three seasons, going 32-44.

The timing was right for Maki, his wife and seven-year-old twins to make the move. Before the Sentinel job even came open, they were considering moving to better accommodate their travels to work. Turns out they moved farther than originally thought, coming to Montana to start a new chapter.

“We realized it was really just a place for our family that we wanted to raise our kids,” Maki said of Missoula. “Oregon is a nice place, and we like Oregon, but it’s so spread out with what we were doing. This will really help us centralize who we are and our life.

“Then the opportunity to be back at Sentinel, it’s a great athletic program. From what I hear, we’re very talented. And some of my favorite teachers I’ve ever had in my life were at Sentinel High School.”

Maki returns to the school where he was a three-sport athlete in basketball, cross country and track and field from 1986-90. He lettered twice in all three sports but considered himself primarily a basketball player.

A late bloomer, Maki was a self-described “skinny” 6-foot-4 forward who didn’t make the varsity team until his junior season. He averaged 13.7 points as a senior co-captain and was named Sentinel’s most dedicated basketball player while suiting up for head coach Wes Appelt.

Maki moved on to Whitman College in Washington from 1990-95, where he played for former Montana assistant coach Skip Molitor, who coached under Griz coach Stew Morrill from 1989-91. He rose to the sixth-man role, averaging four points and two rebounds as a senior.

Enthralled with basketball, Maki chose to pursue coaching. He’s also helped run basketball camps in Oregon starting as a college junior, which was possible because he first made enough money for the summer by spending three weeks at the start of the summer working at a fish cannery in Alaska.

“As a player, I was probably just like I am as a coach: energy, smiling, enthusiastic and having some fun, flying all around,” Maki said.

He’ll be replacing Jay Jagelski, who led the team to five state appearances and a 95-86 record in eight seasons but decided to step down to spend more time with his family. He had considered applying for the job when it opened eight years ago — when Jagelski was hired — but never pulled the trigger.

Maki was once again alerted to the opening and encouraged to apply by several of his former Sentinel teammates. One of those was Helena Capital coach Guy Almquist, who will now be a rival in the Western AA Conference.

“It’s been a while since I’ve been home, but I feel a lot of familiarities, so that’s pretty cool,” Maki said. “It’s what I’ve always told people about Montana: how hospitable everybody is and how great everybody is.

“I loved my time at Sentinel. That’s one of the reasons I’m so excited.”

Maki will have a loaded roster on paper this season, and he’ll have a better opportunity to evaluate his team when he permanently moves to Missoula and the team can get together as sports return from the coronavirus pandemic. The Spartans are expected to bring back all five of their starters from a state quarterfinalist team that’s highlighted by Montana State commit Alex Germer.

Now back home, Maki feels he’s found the place where he wants to dribble out his coaching career for another dozen-plus years. He hopes to see his twin son and daughter, who just finished kindergarten, eventually graduate from the same high school he attended and will now be teaching social studies while trying to create some poetry on the court.

“My daughter’s name is Montana, so I think everybody knew or knows that I have a soft spot for the state and for my high school,” Maki said. “I don’t think anybody begrudges me going home. Hopefully this is it.”