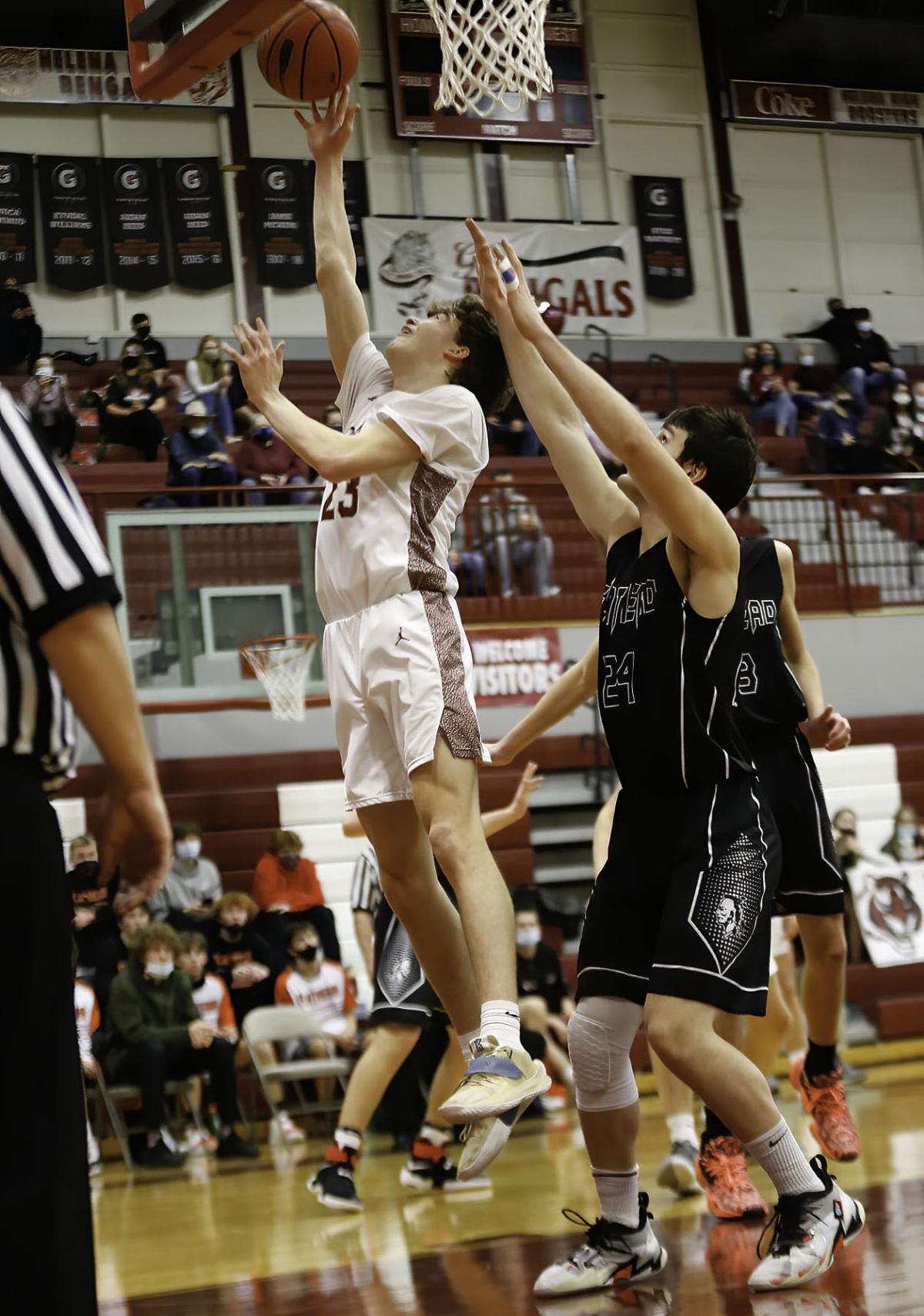 Evan Barber goes up for a bucket in the first quarter of Helena High's loss to Flathead Saturday in the Jungle, 50-47, in overtime. 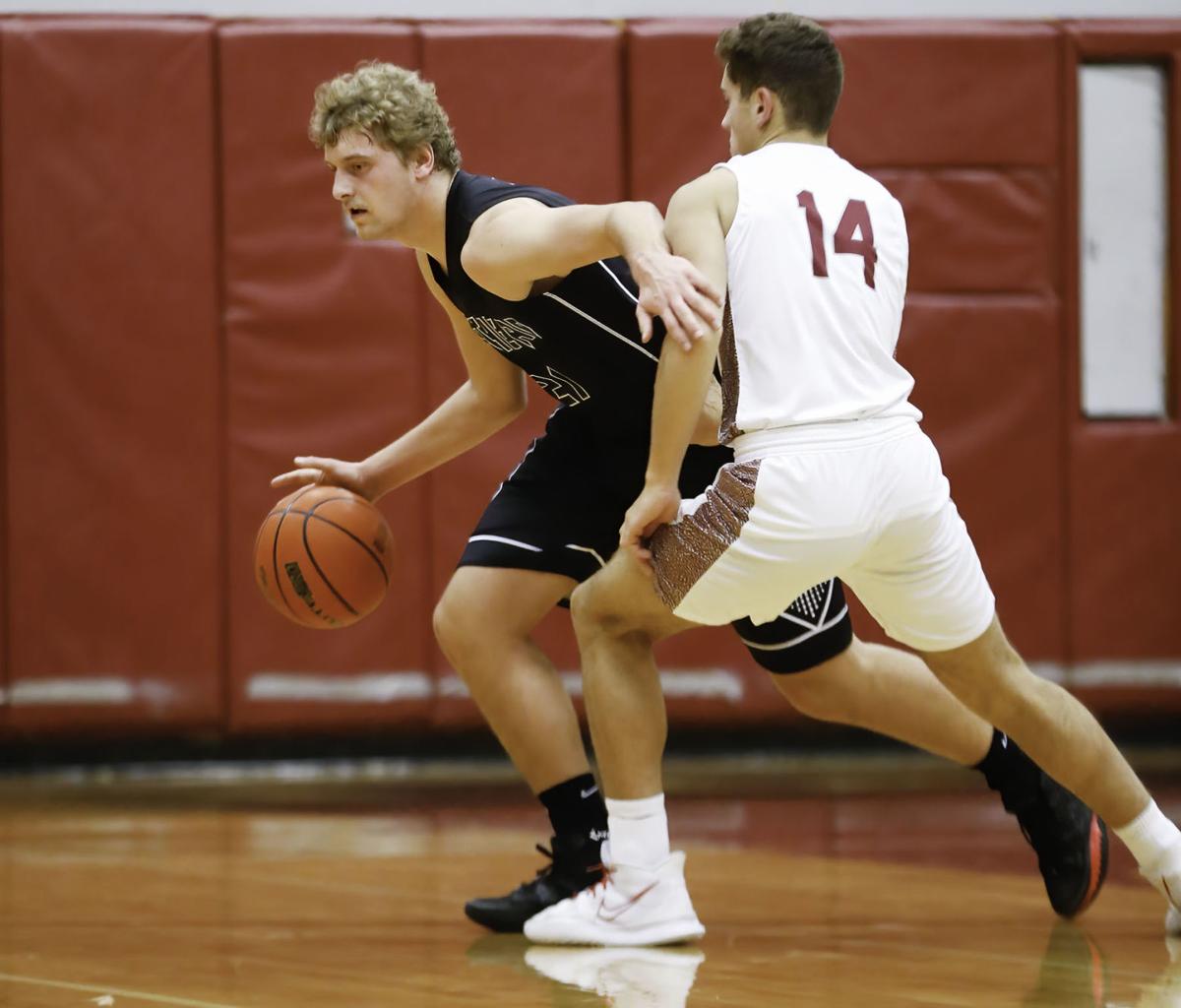 Ethan Vandenbosch of Flathead dribbles the ball against Helena High defender Austin Zeiler Saturday at the Jungle in a 50-47 overtime win for the Braves.

Evan Barber goes up for a bucket in the first quarter of Helena High's loss to Flathead Saturday in the Jungle, 50-47, in overtime.

Ethan Vandenbosch of Flathead dribbles the ball against Helena High defender Austin Zeiler Saturday at the Jungle in a 50-47 overtime win for the Braves.

During the first 30 minutes and change Saturday in Helena, Kalispell Flathead's Joston Cripe scored just two points and made a minimal impact.

But with his team trailing, on the road, he more than made up for that in the last two minutes of regulation and overtime, making three clutch 3-pointers including one that sent the game to overtime and another, which banked in off the glass just before the buzzer sounded to give the Braves the 50-47 win.

"My main thought was just to put it in the hole," Cripe said of his game-winner. "I didn't want to stay here for another overtime."

If it wasn't for his two treys late in the fourth quarter, the game wouldn't have gone to overtime. Even so, down by three and less than 15 seconds on the clock, Helena senior Austin Zeiler caught the ball and nailed his own clutch shot, tying the game at 47 all with just seconds left on the clock.

Thinking quickly, Cripe got the ball, advanced it up the court and took his shot as time expired. When it went in, there was pandemonium on the Flathead sideline.

"That was one of the best feelings on earth," he said. "And I just want to thank my teammates for trusting me to take those shots. I always try to take a deep breath before the play and stay composed and it worked out."

It certainly did and in the process, the Braves won their second game in a row as they head into the final week of the regular season.

At 6-6, the Braves will go the season against Kalispell Glacier and Missoula Big Sky with a chance to finish in the top four of the Western AA standings, which would mean hosting a play-in game for the Class AA state tournament.

"We went 2-0 this week," Coston said. "And that's something we haven't been able to do this season. That's a huge step for us."

In the opening stanza, Flathead built a 13-2 lead before 10 points from Evan Barber got the Bengals within three after one (15-12). Both teams struggled to score in the second and Helena went into the half down six.

Kaden Huot knocked in two treys in the third and after a long jumper from Bergin Luker, the Bengals trailed by just one heading into the fourth.

Eventually, Helena High was able to take the lead and went up three on two free throws from Barber with 10 seconds left in regulation.

But Cripe was able to create space for an open look and extended the game with one of his three makes from beyond the arc as he scored 17 total, with 15 coming in the final five minutes of game action. Ethan VandenBosch also added 12 in the win for the Braves.

Barber matched Cripe with a game-high 17 points to lead Helena High. Huot added 13 for the Bengals who dropped to 0-12 with the loss on Senior day.

Helena will be back at home Thursday night against No. 1 Missoula Sentinel before playing at Capital next Saturday.

"Evan Barber really stepped up for us and I'm really proud of him," Helena High head coach Brandon Day said. "All of our seniors played really well. We are just waiting to catch a break and hopefully, it happens at the right time."