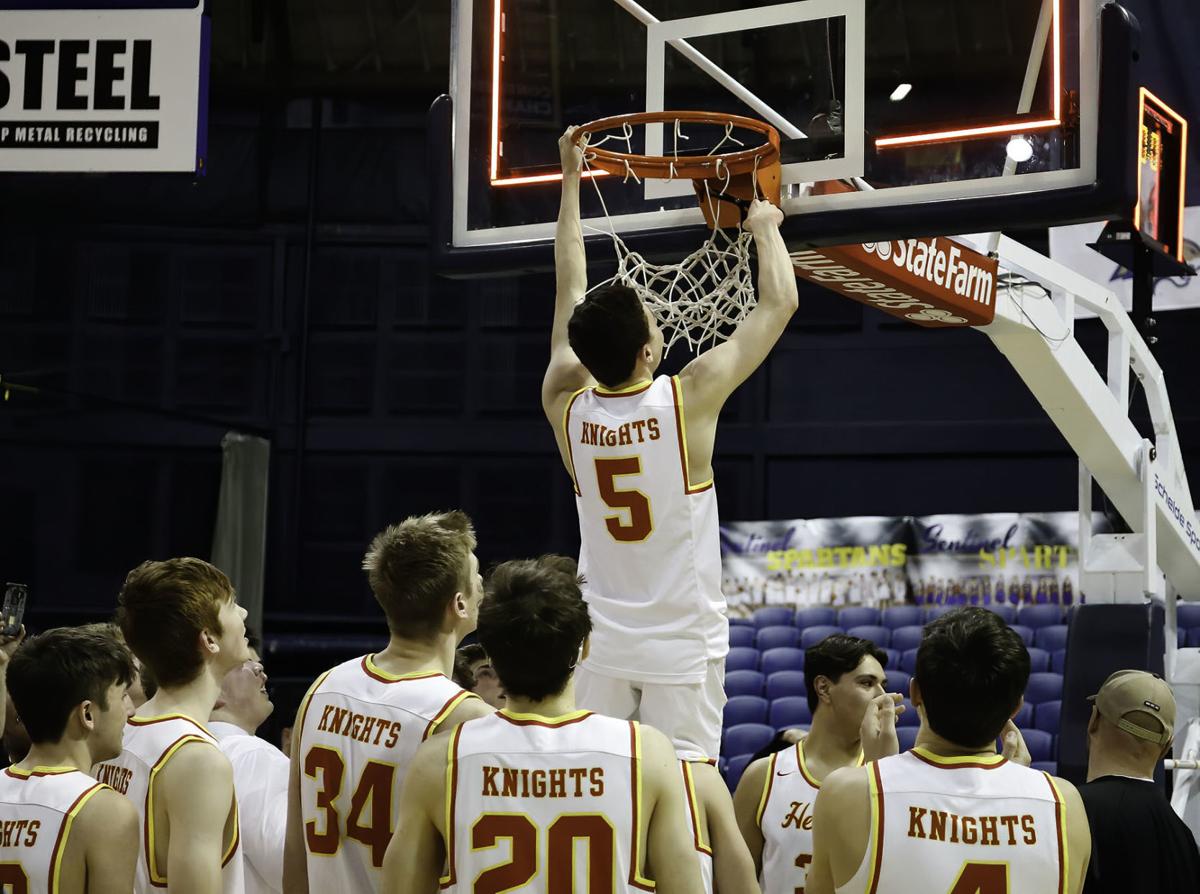 Missoula Hellgate cuts down the nets after winning in the semifinals and being named co-champ with Billings Skyview at the State AA boys basketball tournament in Bozeman. 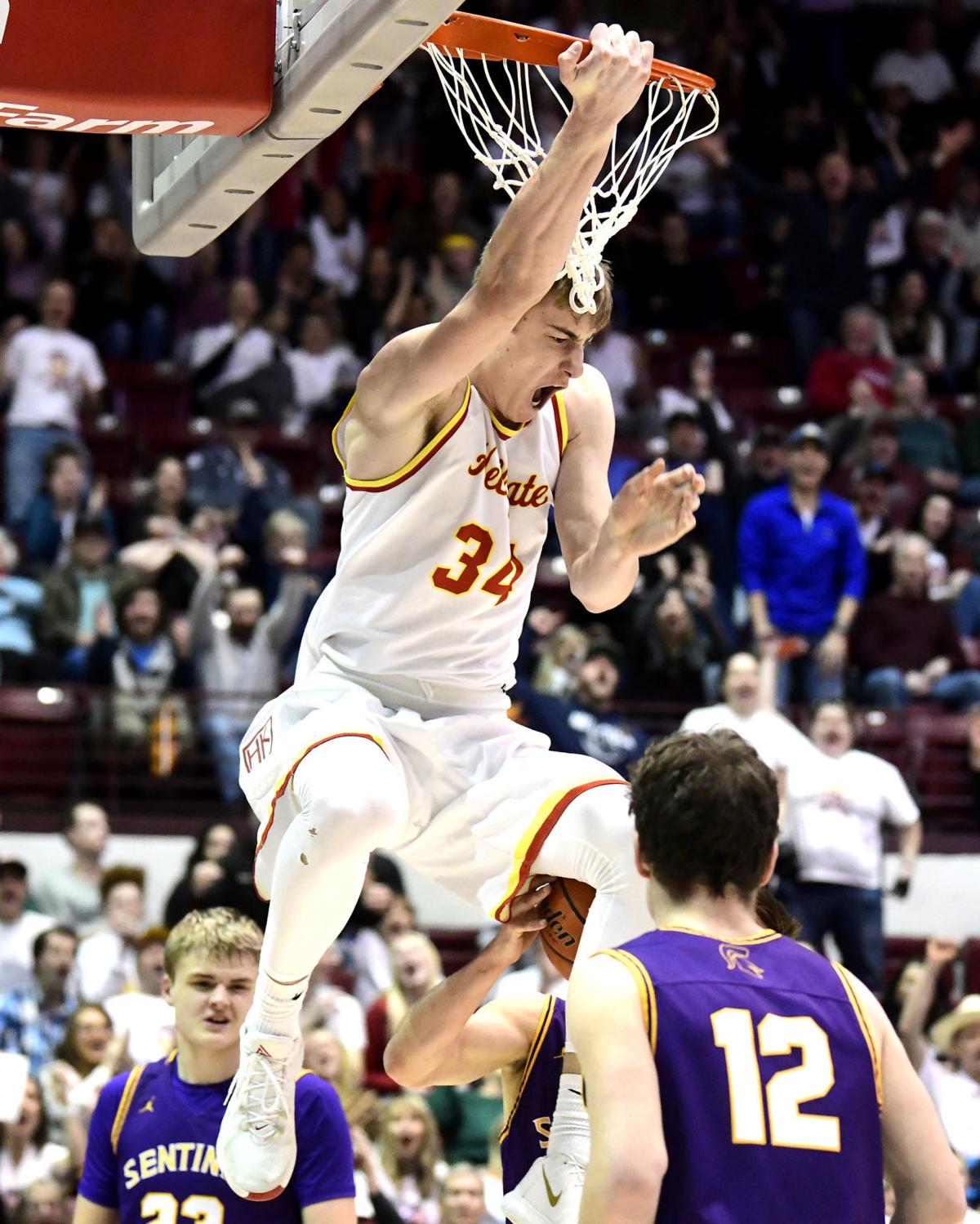 Missoula Hellgate's Abe Johnson reacts after an alley-oop against Missoula Sentinel on Jan. 31, 2020. 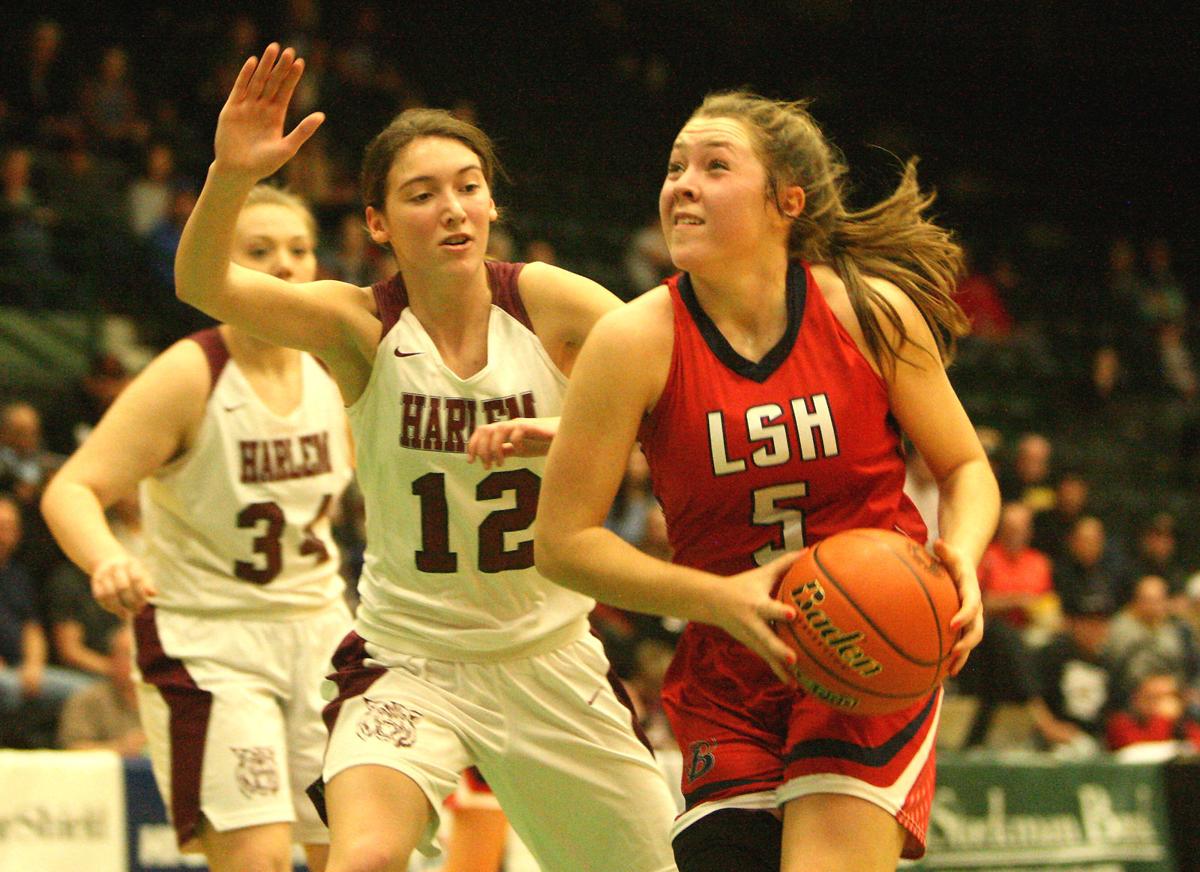 Missoula Loyola's Lani Walker drives for a shot while being guarded by Harlem's Alaynee Hawley on Thursday at the Butte Civic Center at the Class B state tournament. 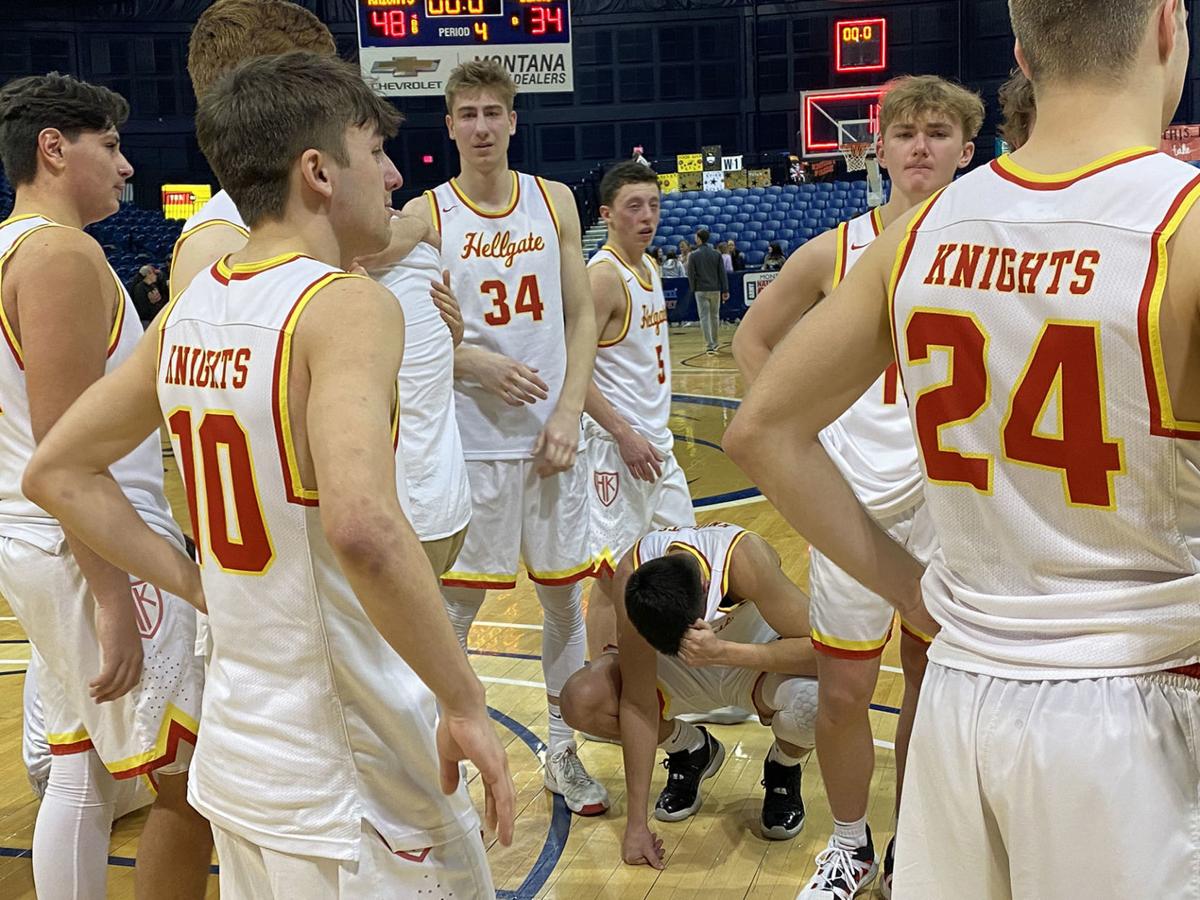 Members of the Missoula Hellgate boys basketball team react after the public address announcer says the AA State Tournament is canceled because of the coronavirus pandemic. Missoula Hellgate and Billings West were named co-state champions. 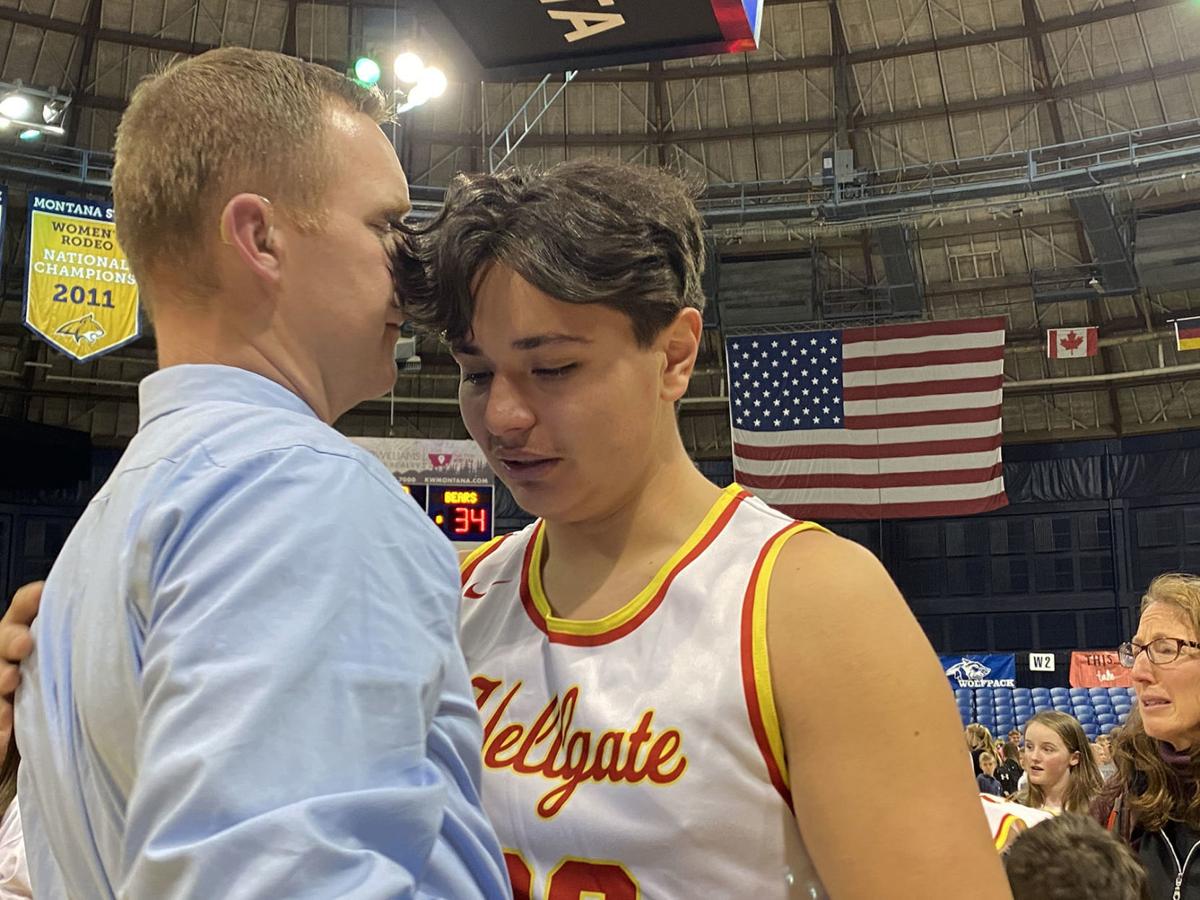 Missoula Hellgate cuts down the nets after winning in the semifinals and being named co-champ with Billings Skyview at the State AA boys basketball tournament in Bozeman.

Missoula Hellgate's Abe Johnson reacts after an alley-oop against Missoula Sentinel on Jan. 31, 2020.

Missoula Loyola's Lani Walker drives for a shot while being guarded by Harlem's Alaynee Hawley on Thursday at the Butte Civic Center at the Class B state tournament.

Members of the Missoula Hellgate boys basketball team react after the public address announcer says the AA State Tournament is canceled because of the coronavirus pandemic. Missoula Hellgate and Billings West were named co-state champions.

MISSOULA — Already preparing for a state championship game against Forsyth back at their team hotel in Butte, the Loyola Sacred Heart girls basketball team was in a state of shock when the Breakers heard the news that every high school tournament in Montana had been canceled and they, at 25-0, would be declared co-champions.

Novel coronavirus, the virus that carries the COVID-19 disease that has sickened well over 2,000 people in the United States, had finally been detected in Montana, including one case in Butte-Silver Bow County. It was a shocking development for many around the state and the sudden cancellation of the tournament hit the players, coaches and fans hard.

“Just savor every moment we have with our team tonight,” Loyola head coach Travis Walker told his team after the announcement came. “Be proud of being 25-0, being that, being the co-state champ with them is how it will be told and that’s just what it is. But just enjoy the experience, it’ll be a story that you can tell for a long time about the 2020 season.”

Some 80-odd miles away in Bozeman, a different story was playing out for the Missoula Hellgate boys basketball team. Boos from fans rained down as the public address announcer’s voice told an unhappy crowd that Missoula Hellgate and Billings Skyview would be co-champions.

The exact moment the Knights learned their season was over. Not sure you'll ever see a more bummed out state championship team. Hate to see it end like this. #mtscores pic.twitter.com/e2bMSfYKix

For an undefeated Hellgate squad, it was yet another gut punch in the Class AA tournament.

“These kids love to play and they love to complete,” Hellgate head coach Jeff Hays said to 406mtsports.com. “We are disappointed at missing the opportunity to play another game, but this is something that is out of our control.”

The Knights, of course, ended last season with a dramatic overtime loss to Bozeman in the state championship. While players and coaches did not talk too much about the loss to the Hawks, inside the team it was an occasional source of discussion.

It was not said in so many words, but Hellgate was absolutely on a revenge tour of sorts. The Knights sported Utah State-bound Rollie Worster, Army commit Abe Johnson and Big Sky transfer Cam LaRance, who is being pursued by Frontier Conference schools.

In short, an all-star team with fantastic role players that never got a chance to play for a title.

“We didn’t expect them to just stop suddenly like that,” Worster said to 406mtsports.com. “To stop before the final game like that is just…I don’t know. We shouldn’t have even started if it was just going to come to this.”

Loyola, which had a stacked team of its own, can relate. Lani Walker, Sam Clevenger and Syd Koppang all were named first-team all 6-B conference and all three made all-state as well. Laney Denning, Natalie Clevenger and Kelsey Esh were all named to the second-team.

The state title is Loyola’s first since the 2006 season.

While officials in Butte made sure to get Loyola a bracket, game basketballs and one of the nets, Hellgate took matters into its own hands.

Without a ladder, Kade McWilliams got on the shoulders of several of his teammates to cut down one of the nets at Brick Breeden Fieldhouse. Montana State officials tried to stop the impromptu net cutting, but the Knights cut it down anyway to the loud cheers of the Hellgate faithful.

Missoula Hellgate team doesn’t care. They cut down the nets, even as MSU officials tried to stop them. #mtscores pic.twitter.com/FjvFQ4GqDJ

Trophies to all teams will be sent out within a couple weeks, Walker said. There will always be an asterisk by the 2019-20 season, though many coaches around the state voiced their appreciation to the Montana High School Association for letting the tournament go on as long as it did.

Montana was the last state to not have any spectator restrictions in its state tournaments, a sharp contrast to how the rest of the country has dealt with the ongoing public health crisis.

But, the MHSA was in constant contact with coaches and administrators and Walker had nothing but compliments for how the entire situation was handled.

In a truly unprecedented turn of events, it was hard for anyone involved to truly know how to react.

For the two Missoula teams that had a shot at a state title it was a hard pill to swallow, but a necessary one as a viral pandemic begins to grip the United States.

“It’s something that’s out of out control. It’s not something our team, our players, our school could control,” Walker said. “The only thing we could control is the game we played yesterday and enjoy that moment with our team and our parents and our school. Everything else just happens.”

More in Montana sports scene touched by coronavirus (35 of 58)

BOZEMAN — Missoula Hellgate boys basketball players grinned as they walked off the court at the Brick Breeden Fieldhouse on Friday night.