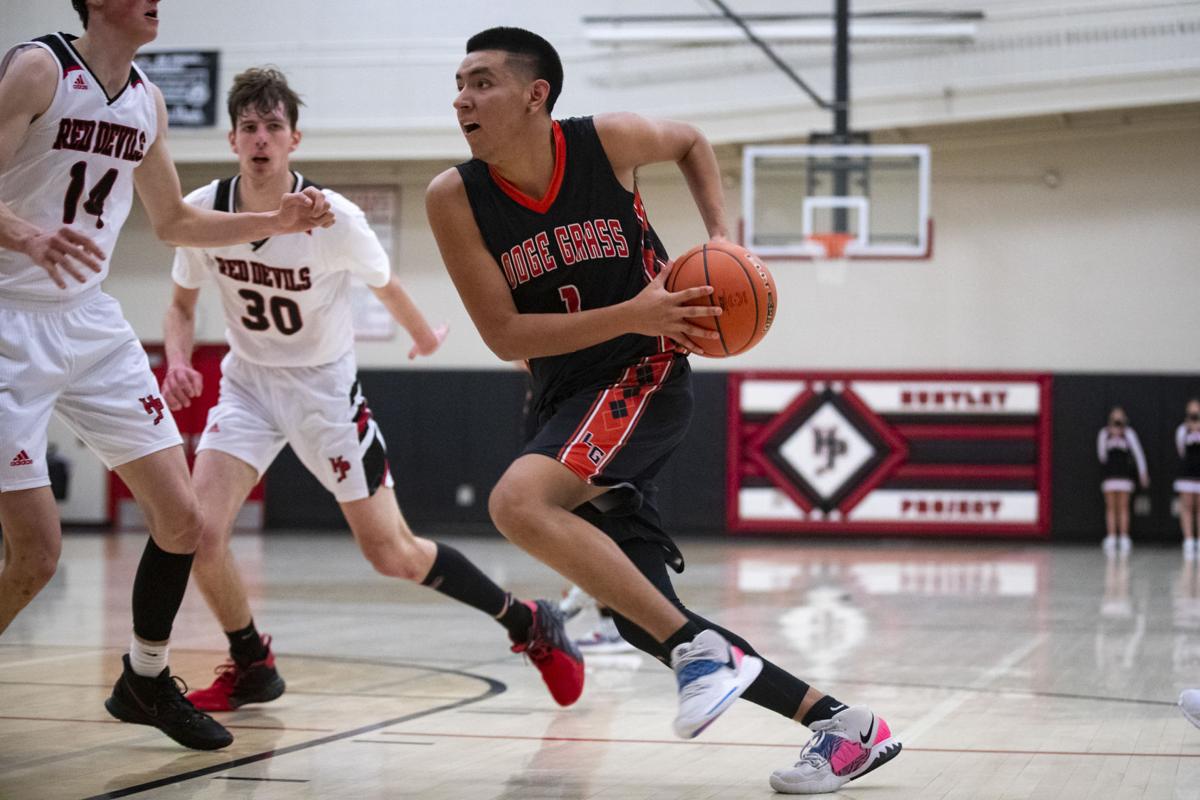 Lodge Grass' Damon Gros Ventre drives towards the hoop as Huntley Project's Jake Fox (14) and Noah Bouchard (30) defend during their game at Huntley Project High School in Worden on Friday. 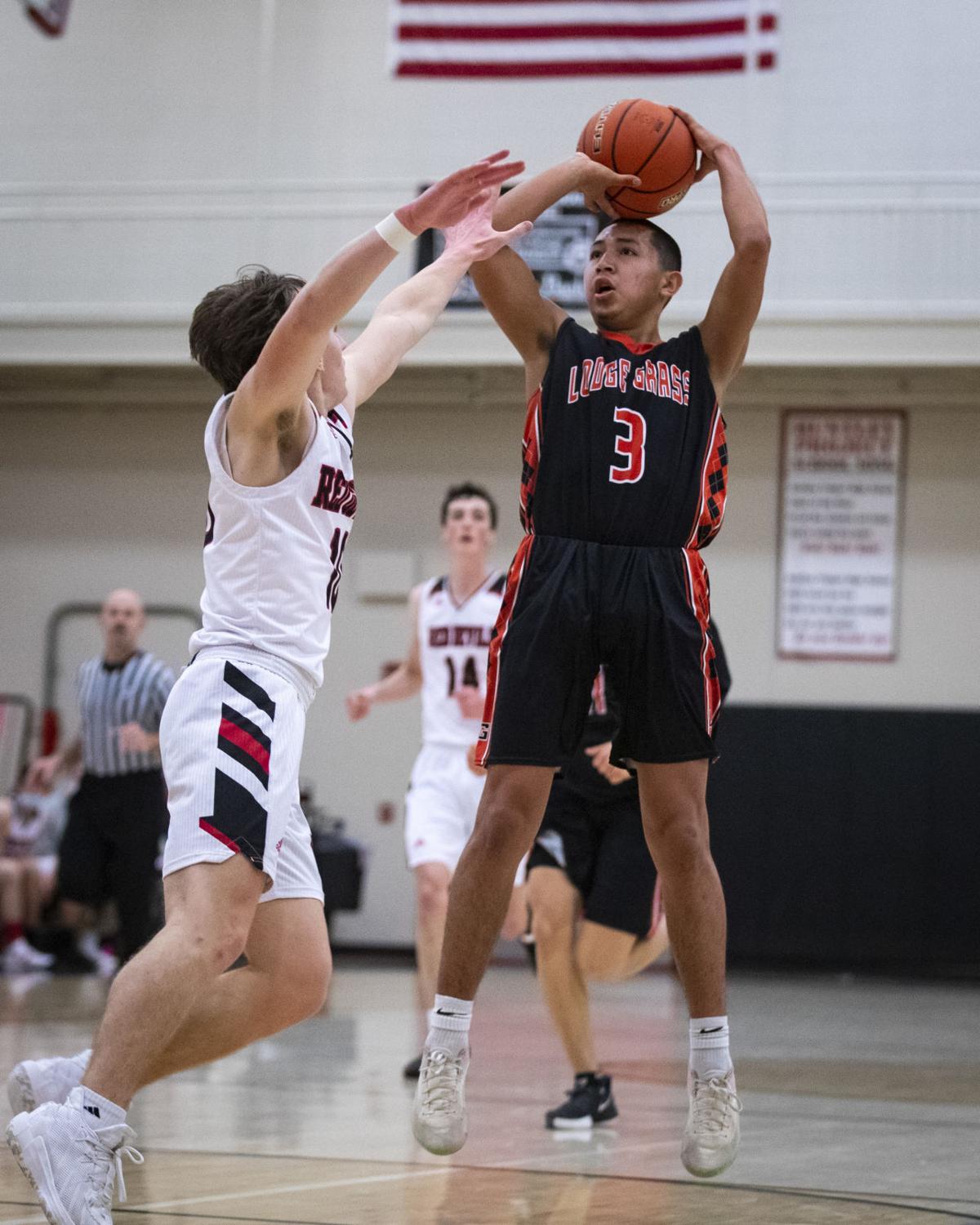 Lodge Grass' Damon Gros Ventre drives towards the hoop as Huntley Project's Jake Fox (14) and Noah Bouchard (30) defend during their game at Huntley Project High School in Worden on Friday.

WORDEN — Two of the best Class B boys basketball teams in the state faced off Friday night, and both left the gym feeling mostly good about their present status as well as their potential.

Lodge Grass defeated host Huntley Project 66-58 for a Southern B victory. Both the Indians (2-0) and the Red Devils (2-1) have dealt with some preseason disruptions, so their coaches are excited to see how their teams evolve over the next couple months. Both have the talent to meet again in the divisional, and perhaps state, title game.

“We don’t expect (Project) to go away at all. We respect this program. It’s a tough program, and they help us get better. Hopefully, we make them get better,” said Lodge Grass coach Josh Stewart. “It is a growth game, but I could see how people wanted to watch this game.”

Lodge Grass erased an early deficit and never lost the lead after that, although Project remained within reach. The Red Devils trimmed a 34-26 halftime lead to 43-41, and the Indians led 50-45 through three quarters. Project answered a few Lodge Grass mini-runs to maintain a one-possession deficit in the early minutes of the fourth, but the Indians pulled away.

Project senior Noah Bouchard led all players with 24 points (10 of 15 on field goals) and nine rebounds, while senior Jake Fox had 15 points (6 of 14) and seven boards and senior Tim Rose added 11 points (4 of 9) and six assists.

Those three were arguably Project’s best players last season, along with Noah’s then-senior brother Isaiah Bouchard. The Red Devils were ranked No. 1 in the final 406mtsports.com Class B rankings, but they missed state after losing to Three Forks and Columbus at the Southern B Divisional tournament. Only Lodge Grass and Class A Lewistown beat Project in the regular season, and the Devils beat both teams at other points.

Mark Branger, who replaced Randy Robinson as Project’s head coach in the offseason, said his players are still learning the new offense, so he was pleasantly surprised by how close Friday’s game was.

“To play Lodge Grass that close… I told the kids, ‘This is a victory in my eyes,’ ” Branger said. “I could not be happier with this group at this point of the season.”

One night earlier, the Devils earned a vengeful 55-42 victory over Columbus.

Lodge Grass shared the Class B state championship with Fairfield last season after the coronavirus pandemic forced the cancellation of the state basketball tournaments’ final day. The outcome was difficult but not demoralizing for the Indians because they, like Project, returned most of their best players, namely all-state star Damon Gros Ventre.

The 6-foot-5 junior looked like the best player on the floor for most of Friday’s game. Gros Ventre finished with 21 points on 8-of-16 shooting.

“I’m just thankful we even have a season,” Little Nest said.

The Indians were down a couple lower-level players because of COVID-19, Stewart said. Last month, another player got the disease caused by the virus, and others who were close contacts recently ended their quarantines. Stewart said he and his assistants monitored minutes, and his players weren’t as energetic as they usually are.

“We got a good full quarter of decent basketball in,” Stewart said. “We’re working toward four quarters, and that’s obviously postseason.”

Hardin vs. Lodge Grass basketball games to be played at Metra with restricted attendance

Less than 3,000 tickets will be sold for next week's Crow rivalry games.