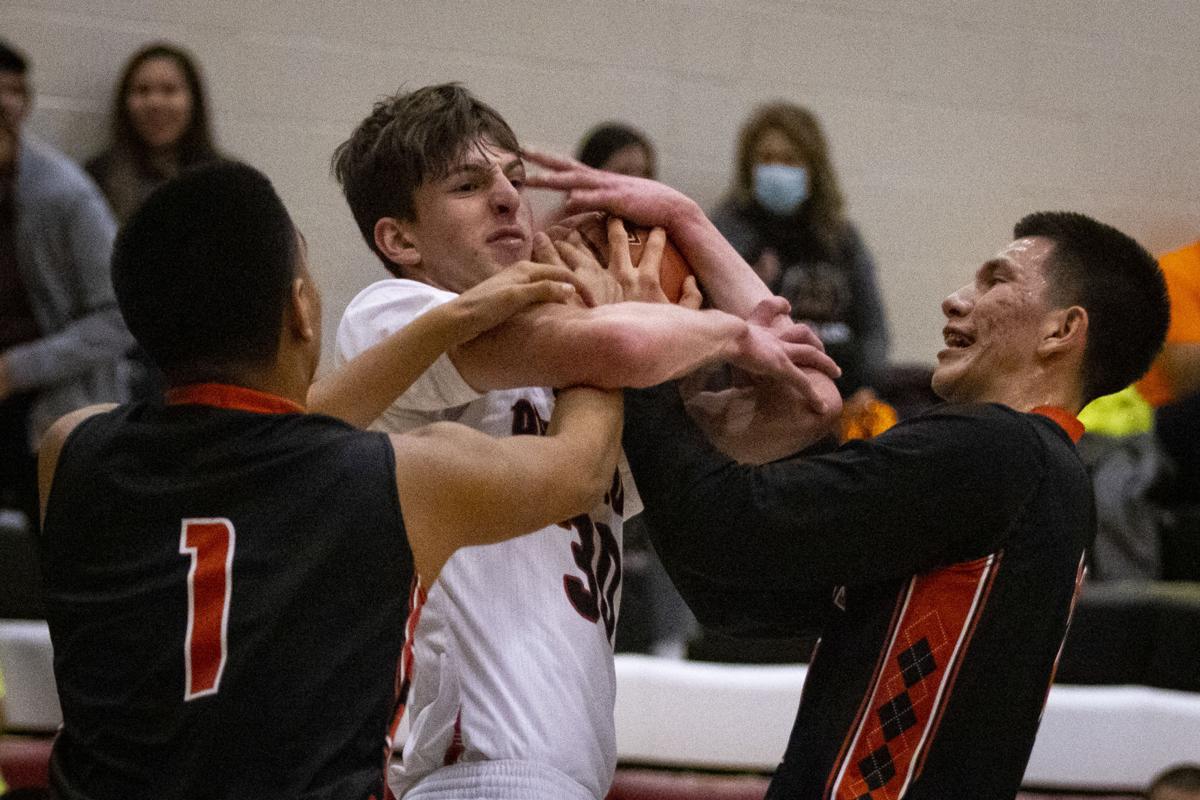 Lodge Grass' Damon Gros Ventre (1) and DC Stewart try to steal the ball from Huntley Project's Noah Bouchard during their game in Worden on Jan. 8. Lodge Grass is ranked No. 1 and Project No. 3 entering this week's Southern B Divisional tournament. 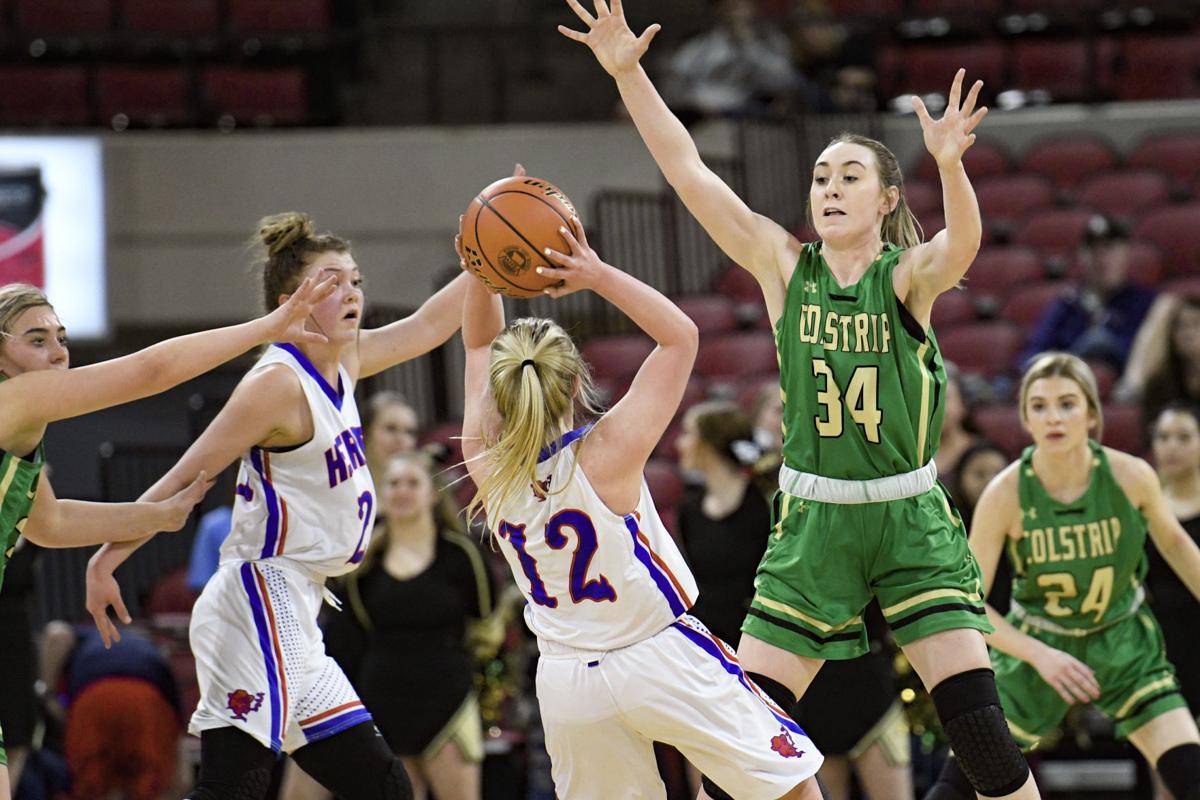 Colstrip's Addison Casterline (34) defends Big Timber's Bailey Finn during the Southern B Divisional championship game at First Interstate Arena at MetraPark on March 7, 2020. Colstrip and Big Timber are both undefeated going into this season's divisional tournament.

BILLINGS — Lodge Grass enters the Southern B divisional boys basketball tournament as the defending champion and No. 1 team in the 406mtsports.com Class B rankings. But other teams have reasons to believe they can knock off the Indians this week at First Interstate Arena at MetraPark.

Manhattan (14-2) begins its Southern B run against the winner of Wednesday’s play-in game between No. 6 Red Lodge (13-3) and Lame Deer (5-7). Manhattan beat Red Lodge in the first round of last year’s divisional tourney and lost 73-66 to Lodge Grass in the semis. The Tigers’ season ended a day later in a 69-47 loss to Colstrip, dropping their record to 11-11.

Columbus is the only Class B team other than Colstrip and Lodge Grass to defeat Project, winning 42-41 in overtime on Feb. 4. The Devils beat the Cougars 45-42 in the 4B title game on Friday.

Project opens Southern B play at 5:30 p.m. Wednesday against Three Forks (5-14), which began the season 0-7 and 2-13 but qualified for divisionals with wins of 75-56 over Jefferson and 50-47 over Big Timber last week in the 5B consolation bracket.

If the Devils get past the Wolves, they’ll likely set up a rubber match with Lodge Grass in the semifinals. The defending State B co-champion Indians beat Project 66-58 on Jan. 8 but lost 64-52 on Feb. 2, a game they were playing without all-state star Damon Gros Ventre, who returned from an ankle injury three weeks ago.

Project will try to get a bad divisional taste out of its mouth — it entered last season’s tournament ranked No. 1 in Class B but lost to Three Forks in the semis and to Columbus in a loser-out game.

There will be 500 tickets available per team for the Southern B divisional boys and girls tournaments.

The girls portion of the Southern B appears to be as power-packed as it can get.

Like the boys bracket, the top three teams in the final 406mtsports.com Class B rankings, and five ranked teams overall, highlight the nine-team girls field as the divisional gets underway Wednesday at 9 a.m., when Joliet takes on Baker in a play-in game.

Columbus versus No. 8 Jefferson is at 1 p.m. Wednesday, with No. 2 Colstrip against Whitehall in the day’s final girls game at 3 p.m.

On Thursday, No. 10 Forsyth plays No. 3 Roundup at 1 p.m., while top-ranked Big Timber takes on the Joliet-Baker winner at 3.

Three teams advance out of the divisional to the state tournament, which will be back at Metra from March 10-13.

Big Timber and Colstrip enter the tournament undefeated, though Whitehall nearly got the Herders at the end of the regular season.

Big Timber, led by double-digit scorers Bailey Finn, Emily Cooley and Hailey Brandon, opened the season with a 50-43 win over the Trojans but needed overtime to beat the Trojans 72-69 in the District 5B championship game on Saturday night.

Colstrip has had just one game of a single-digit margin — beating Forsyth 51-45 on Feb. 2 — and has given up more than 37 points just three times this season.

It was the Fillies who toppled Big Timber, again unbeaten, in last year’s divisional title game, 45-35.

Roundup has lost three games this season: early in the year to now-No. 4 Malta, 48-37 (which the Panthers avenged a month later, 47-35) and twice to Columbus. The Cougars got the Panthers 36-34 in overtime in early February and struck again 39-30 in last weekend’s 4B championship game.

Forsyth had to blend in four new starters from last year’s state co-championship team, but has put together a solid season behind Montana State-bound post Lindsey Hein.

Jefferson enters the tournament having won eight of nine, the lone loss coming against surging Whitehall in the opening round of the 5B last week.