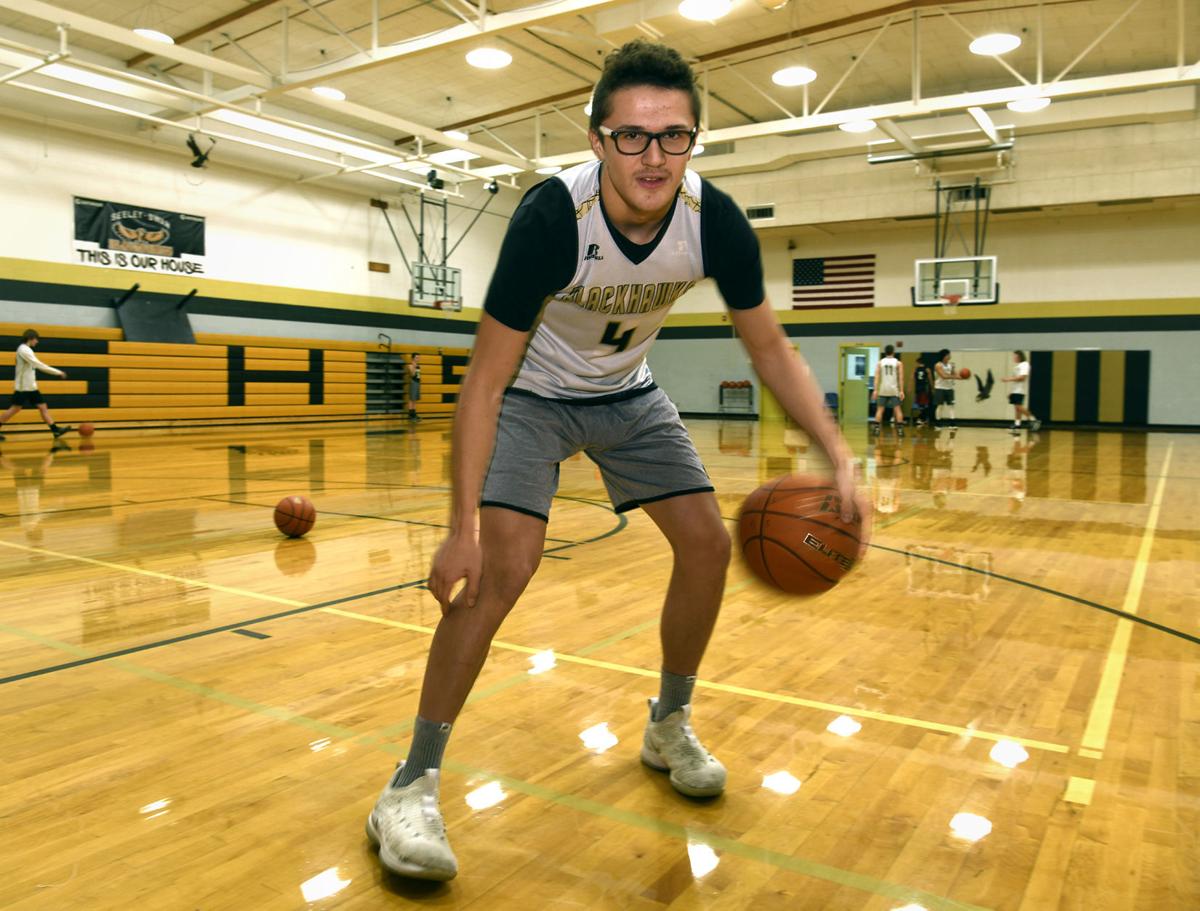 Owen Mercado, a junior guard at Seeley-Swan High School, said basketball has been a refuge and a release for most of his life. Mercado also credits his mom, a single parent raising six kids, with helping him keep his focus. 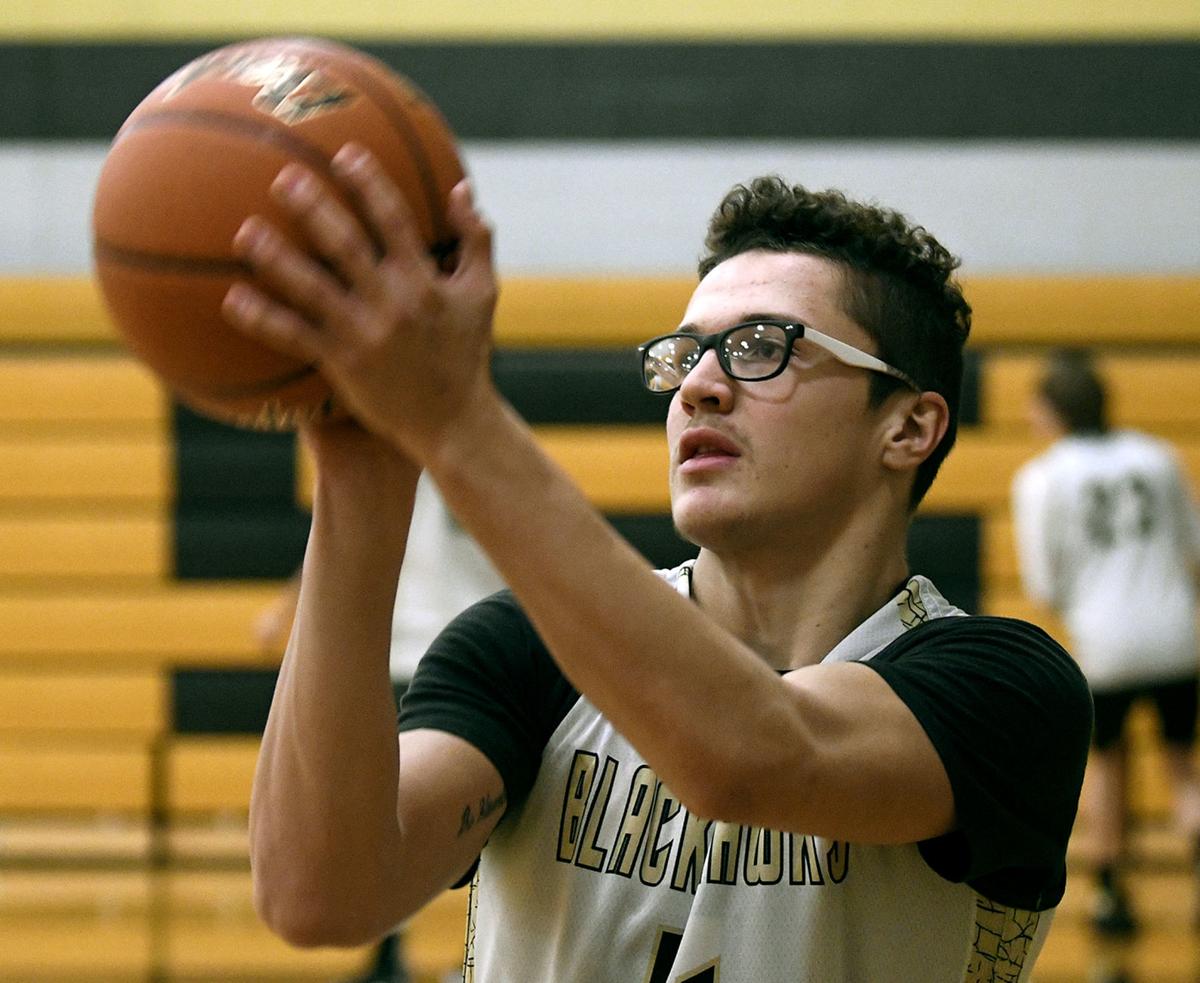 Mercado practices with the Seeley-Swan Blackhawks on Thursday.

Owen Mercado, a junior guard at Seeley-Swan High School, said basketball has been a refuge and a release for most of his life. Mercado also credits his mom, a single parent raising six kids, with helping him keep his focus.

Mercado practices with the Seeley-Swan Blackhawks on Thursday.

SEELEY LAKE — When Owen Mercado wants to be alone, he heads out to the basketball court outside the family’s home and begins to dribble.

If there is snow covering the makeshift court, the Seeley-Swan junior will shovel a 20-foot-by-20-foot section. Once that task is complete, he begins pounding the ball into the dirt. He prefers to dribble with his left hand, even though he shoots right handed and constantly works on a variety of moves picked up from watching YouTube videos of his favorite NBA players.

Once he gets warmed up, he starts shooting and rarely stops.

“Whenever I’m angry, it’s like my therapist, I just go out there and grab a basketball and I shoot and it just calms me down,” Mercado said. “It’s my everything. It’s what my whole world circles around.”

Mercado spends hours upon hours working to get his shot right and it is not just at home. Seeley-Swan head basketball coach Mike Haines gets the gym unlocked by 6 a.m. most mornings and that is where Mercado usually finds himself, sometimes shooting until seconds before class starts.

Lunch time? Much of the same. According to Haines, Mercado will find any break in the day to put up a few shots or go through a quick dribbling drill. After practices, Haines will often rebound for Mercado until the longtime head coach finally shoos him out of the gym.

On those nights, Mercado will occasionally go home and put up a few more shots, sometimes by the light of the headlights from his car. During the summer, Mercado will find himself at YMCA or Peak courts, trying to find a game, often playing for hours on end.

It is an unbelievable amount of dedication for a junior in high school to have, but the work has certainly paid off. After flashing potential his freshman season and then bursting on the Class C scene last year despite an injured hand for most of the season, Mercado has been a force to deal with so far this season.

“He’s the guy that starts our offense all the time,” Haines said. “He’s one of our defensive leaders. He can rebound, he’s a good rebounder when he gets in there … he probably leads us in just about every category, except we might have a post player who has a little better two-point percentage than he does.”

Seeley-Swan is 4-1 on the year, with its lone loss coming by six points to Arlee, now playing at the Class B level. Mercado scored 24 points and had his first in-game dunk against the Warriors.

The dunk, which happened at the Ronan Tip-off tournament, was something he will never forget.

“The crowd went crazy, I felt so good,” Mercado said. “Finally, my first time dunking, all that hard work, just in the yard, I’ve been trying to dunk for four years now, just working on it and working on it, and finally got that opportunity to dunk, it was so amazing.”

In this instance, long hours and hard work paid off, but Mercado is hardly the only family member putting in time helping him grow as a basketball player. His older brother, Gavin Mercado, played basketball at Seeley-Swan for four years and is now attending school at Montana State.

When Mercado has time, he will drive to Bozeman and play some basketball with his brother and according to him, occasionally a couple of the Bobcat basketball players.

Gavin Mercado also spends time going through his younger brother’s film and critiquing him, which Owen feels helps quite a bit. A former teammate of Gavin’s, Nino Robinett, has been instrumental in his development as well.

Gavin's mom, Deidre Lechowski-Mercado, gets involved, too, and when she has the time, will face guard Mercado or put up a broom in his face. It is a great time for both and Mercado appreciates what his mom, a single mother of six, has sacrificed for the family.

Working two jobs — one in the medical profession doing life enrichment and also as a cleaner — she keeps the large family running. They have pushed through tough times and money issues and Mercado nearly chokes up when asked about how much his mother has done for them.

“(She’s my) number one supporter,” Mercado said. “She’s always there for me. Even when I’m mad, she tells me, she might lie a little bit and say, ‘Oh, you did good.’ She’s always trying to make me smile, she keeps me going.”

Mercado’s mother helps put together highlight tapes to send prospective schools and dreams of her son succeeding on the biggest stage. Currently, Mercado is drawing looks from Montana Western in both basketball and football.

College is the dream and Mercado is moving closer and closer to make it a reality.

A talented athlete across the board, Mercado tried football for the first time this year and played quarterback. In eight games he completed 78 of 147 passes for 1,024 yards and 15 touchdowns.

Basketball, though, is still his first love and that is why when given the chance, Mercado will finish his breakfast cereal and head to the basketball court just outside the front door.

NBA highlights are usually part of the morning routine and they start an itch only one thing can scratch — putting up a few shots.

“I consistently keep changing my (shooting) form which is not good, but today I found a James Harden-lookin’ form and it’s going in every time,” Mercado said, pausing. “Every time.”

Bridger Williams' battles on a wrestling mat for Hamilton this season are nothing compared to his literal fight for life and limb last summer off the Alaskan coast.

"I was over the end of the boat and I’m holding on for dear life...  I’m looking over the water and I’m just screaming as loud as I can," said Williams, who has worked on his extended family's salmon fishing boat in the Bering Sea for the last three summers. "I knew that if I let go, I’d go into the water and I would have drowned."