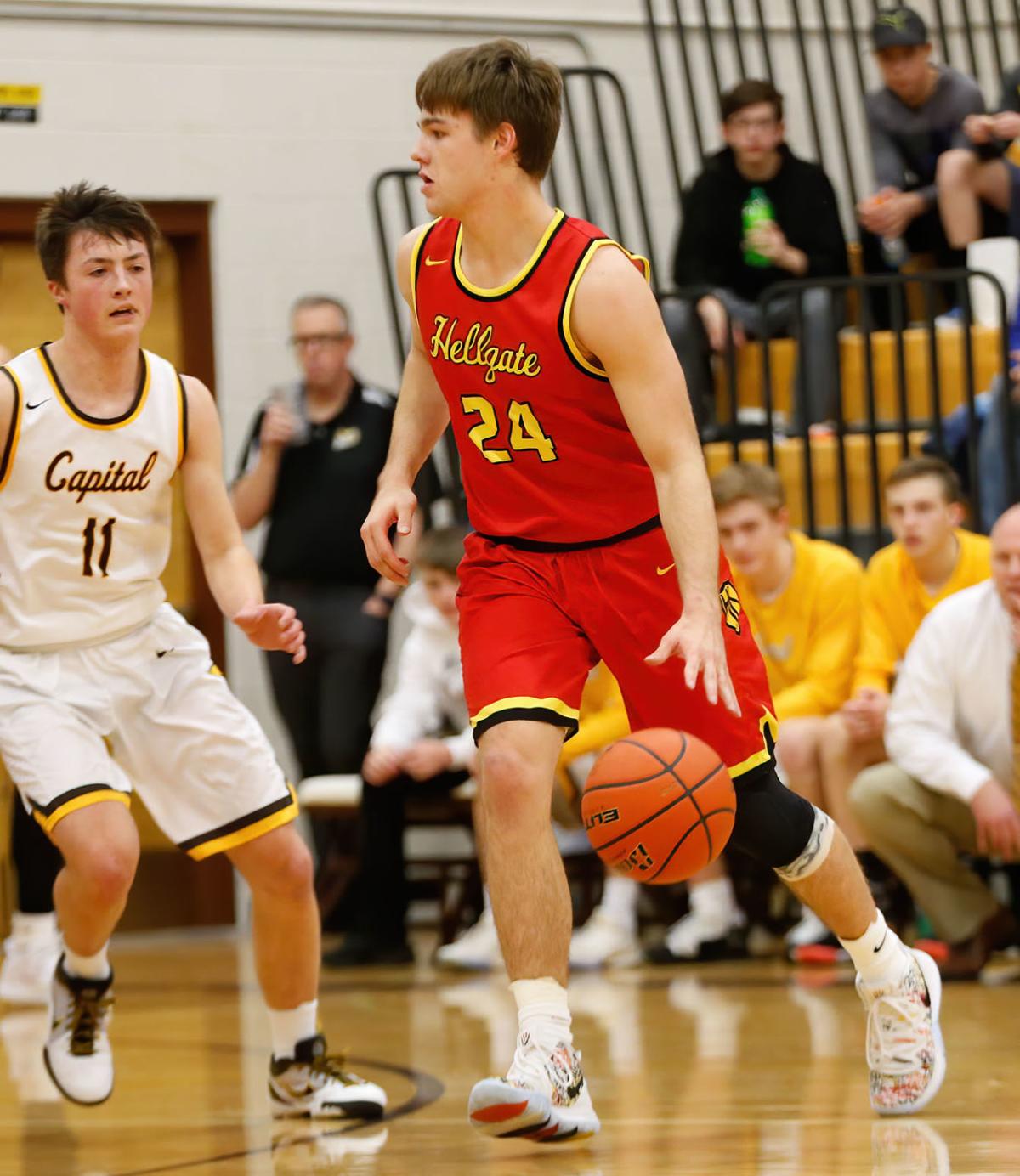 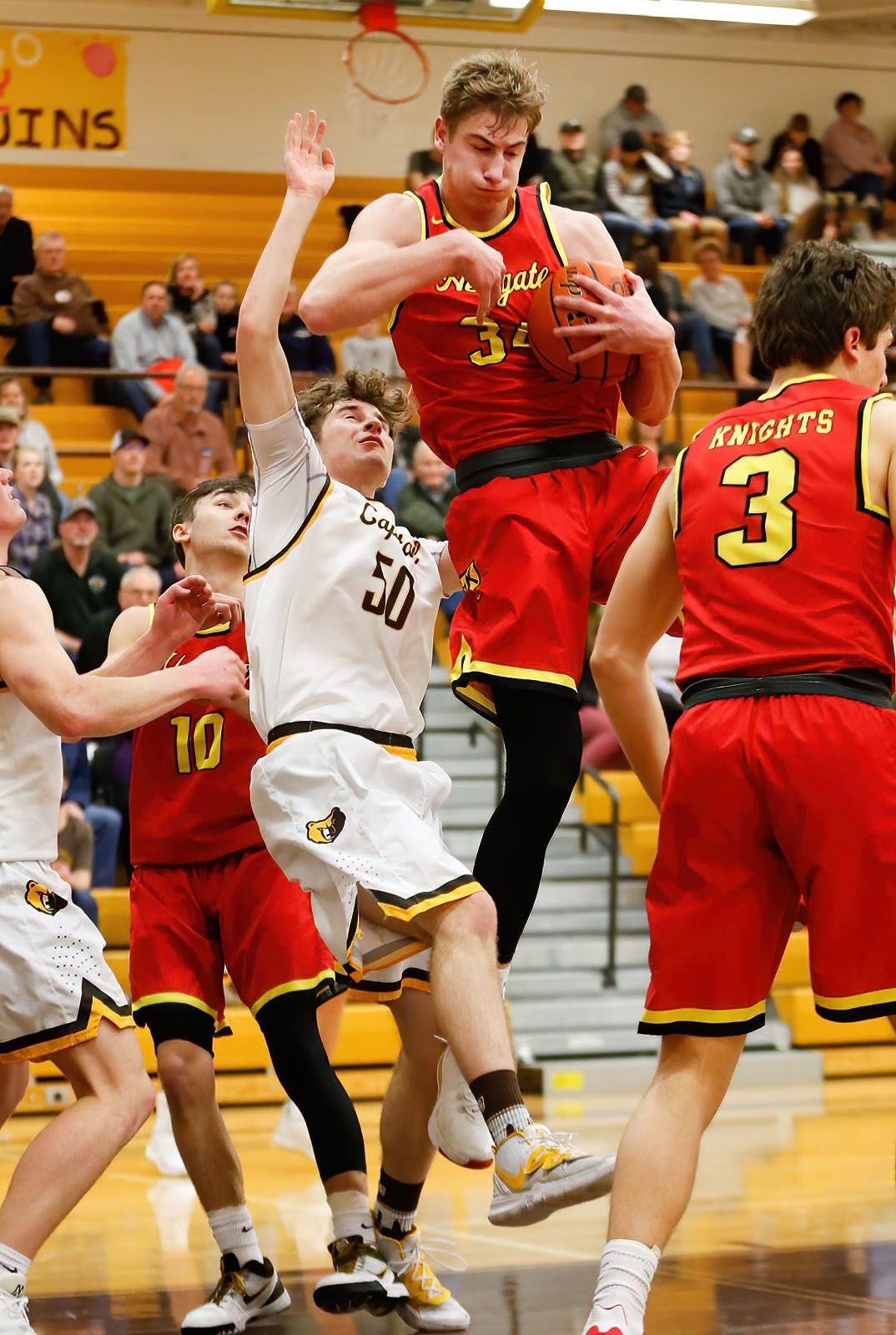 Abe Johnson of Missoula Hellgate tears down a rebound among a crowd of Helena Capital Bruins Saturday in Helena.

Abe Johnson of Missoula Hellgate tears down a rebound among a crowd of Helena Capital Bruins Saturday in Helena.

HELENA — The Missoula Hellgate boys basketball team has been running over its competition all season.

The Knights have put together a perfect 13-0 record and have outscored opponents by an average of 24 points per game.

But after Saturday’s afternoon game against Helena Capital, coach Jeff Hays looked up at the scoreboard and said there was more to a 58-42 win over the Bruins.

“I wouldn’t say we ran over Capital today,” Hays said. “We knew it was going to be a battle coming in, and it was. They made us work, and I’m really proud of my team’s effort to continue to fight through fatigue and adversity.”

The Knights’ adversity didn’t last long as the teams played through the first quarter.

Senior Trevor Swanson hit a jump shot to give the Bruins the lead, but with about two and a half minutes left in the quarter, Hellgate’s offense began to wake up.

The Knights’ one-two punch of NCAA Division I commits of guard Rollie Worster and Abe Johnson certainly made an impact, but it was the role players that sparked a run.

A three-point play by Worster finally gave the Knights some breathing room to end the quarter on a 9-2 run.

Hellgate has only won by single digits one time this season. It was the opening game at Billings Skyview.

Capital tried to keep the game within reach but missed shots that resulted in missed opportunities.

The Knights eventually found themselves with a double-digit lead on a 3-pointer by Worster. Another 3-pointer by Arthur took them into halftime with a 35-21 lead.

“We are going to have to shoot better than what we did,” Capital coach Guy Almquist said, looking down at his stat sheet.

The Bruins finished the first half making just 38 percent of its shots and were 1 for 9 from 3-point range.

“Some of it is due to Hellgate,” Almquist said. “Their length bothers our shooters but, when we look at our film, we will see we did have some open shots that we missed.”

Hellgate’s length was displayed not only by Johnson and Worster, who stand at 6-foot-8 and 6-foot-4 respectively, but also by showing a variety of looks.

By the second half, his 2-3 zone defense was the difference, as the Bruins’ shooting decreased to 32 percent overall.

That isn’t to say Capital didn’t put a run together to try to stay in it.

Down by 17 points at the start of the second half, the Bruins clawed back to get within nine points on a shot by senior Shane Haller, but that was as close as they would get.

On the next possession, Johnson threw down a tip-in dunk in the closing seconds of the third quarter, and then came back to convert a three-point play down low to go back up 47-33.

“With a good team like Capital, who is able to strike quickly, we had to put together a run like (Johnson’s),” Hays said.

Late in the fourth quarter, Worster sealed the game with an expressive breakaway dunk that silenced Capital’s crowd.

He finished with a game-high 23 points and nine rebounds as the Knights’ perfect season continues.

But, while Worster knows he and his teammates are flirting with perfection, they also know it can be taken away on any given night.

“We have to take it one game at a time, but we know what our record is,” Worster said. “We don’t look at it like we are superior to anyone or anything. We just come out and play hard.”

Capital, on the other hand, takes this loss as something it can learn from.

The Bruins haven’t usually used their two post players in Haller and Kaleb Metzger together, but it could be something Almquist attempts if they meet Hellgate again.

“I think we are going to leave this game with more confidence than the last time,” Almquist said.

Capital will look to rebound when it starts a four-game road trip on Tuesday when it travels to Missoula Big Sky. Hellgate will also travel to Kalispell Flathead before returning to Missoula for its next four games.

Ryan Kuhn covers Carroll College athletics for the Independent Record and 406mtsports.com. Follow him on Twitter at @rskuhn