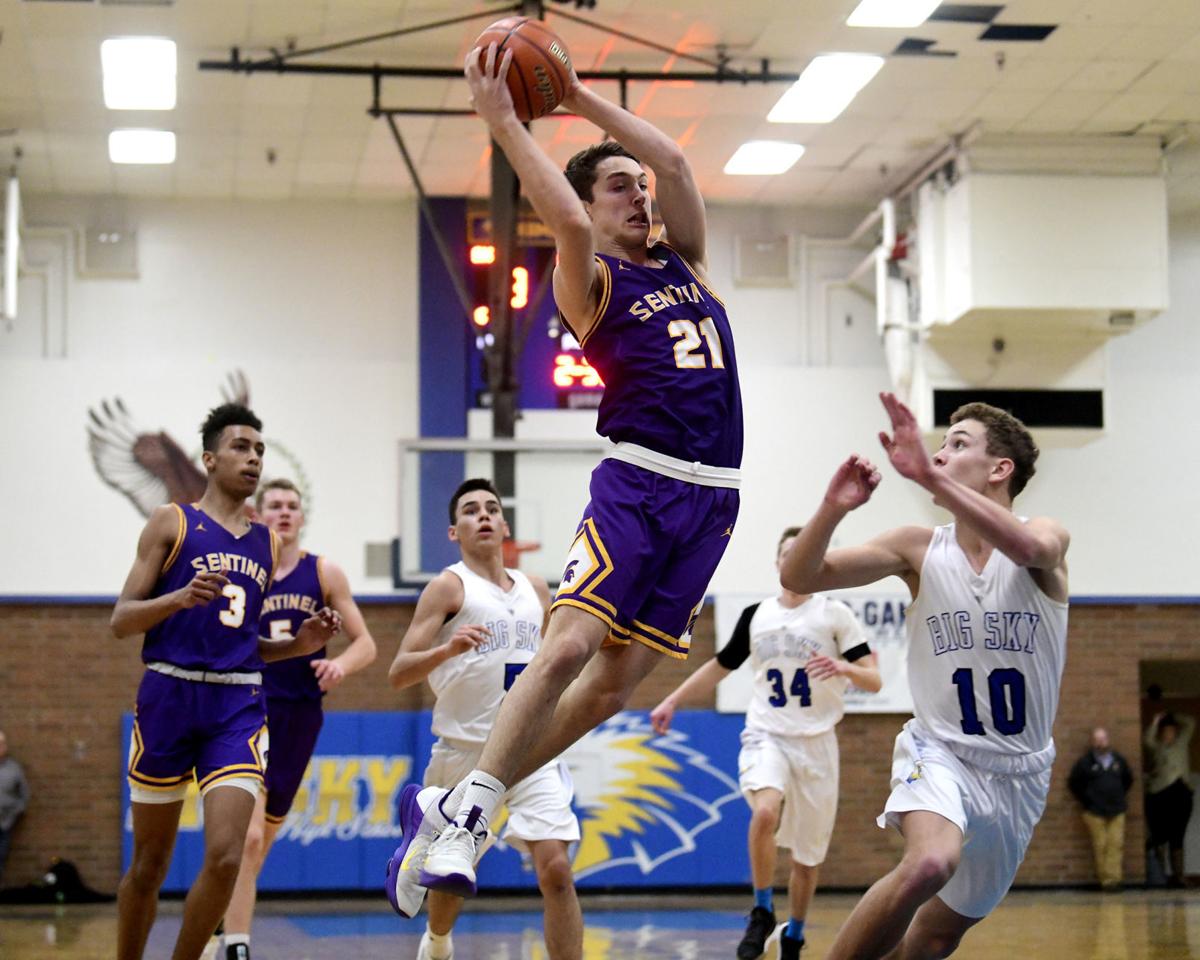 Missoula Sentinel's Zac Crews (21) snags a pass in the air during the Spartans' game against Big Sky at Big Sky High School on Friday night. 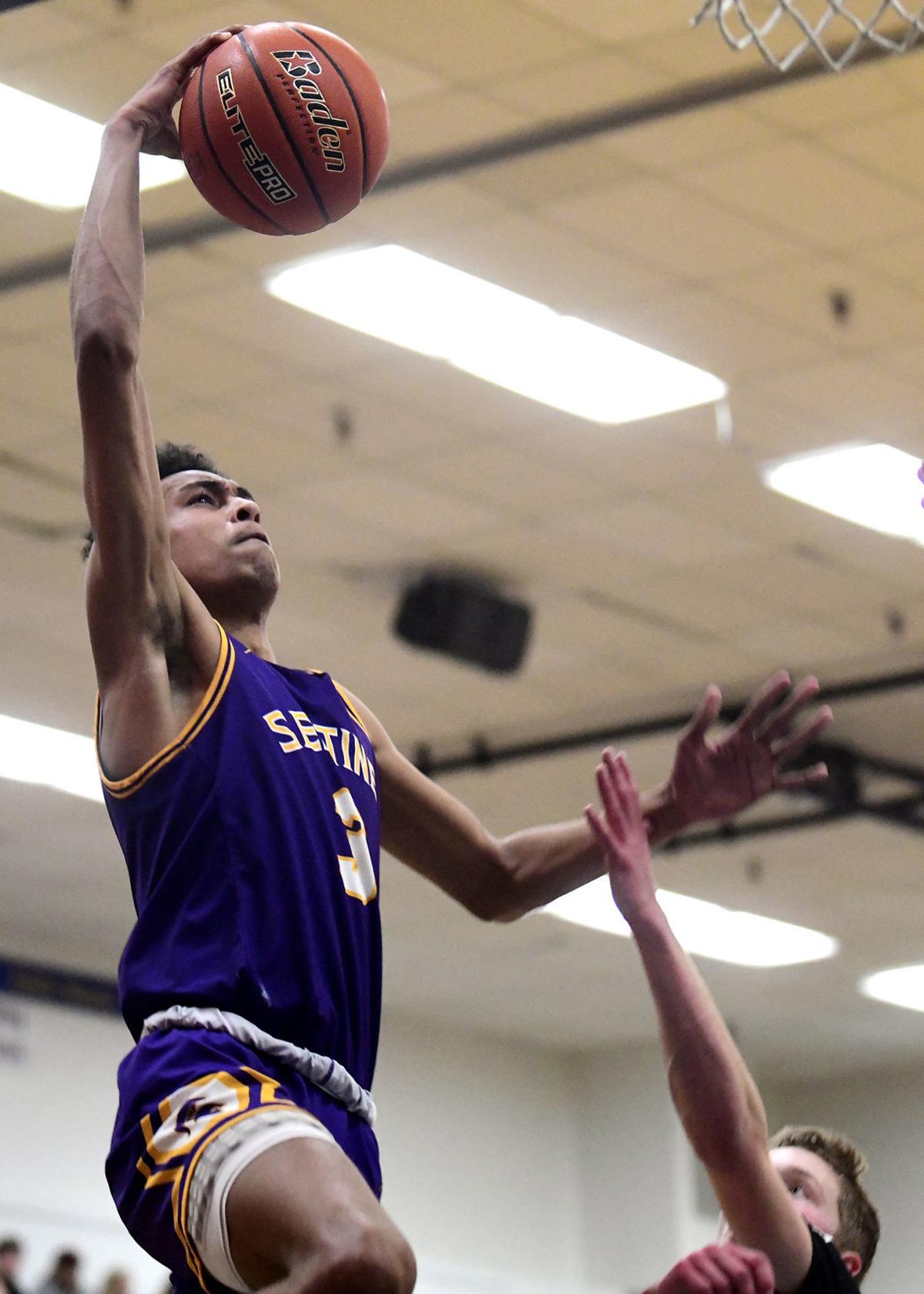 Missoula Sentinel's Zac Crews (21) snags a pass in the air during the Spartans' game against Big Sky at Big Sky High School on Friday night.

Frohlich-Fair then raced down the court, following strong-passing teammate TJ Rausch, who had collected the ball after the block. As Big Sky lost Frohlich-Fair in transition, he floated to the left wing, called for the ball from Rausch and sunk a 3-pointer, falling to the ground as he got fouled.

The solid transition sequence was another one for the fourth-ranked Spartans, who dominated the winless Eagles with their quick-strike offense and full-court press in an 81-61 victory. It was the type of showing they were challenged to put together coming off their first loss of the season, and it moved them to 8-1 ahead of next week’s crosstown showdown against top-ranked Hellgate at Dahlberg Arena.

“The main thing we wanted to work on was our defense,” said Frohlich-Fair, who had two of the team’s four blocks. “We let up way too many points the past few games. I think just coming out with intensity on the defensive end was our main goal. We did that.”

Fellow Sentinel junior Alex Germer added 18 points by finding easy buckets at the rim. He grabbed eight rebounds and threw down a two-handed dunk late in the first quarter, during which the Spartans raced out to a 20-3 lead and were up 22-7 heading to the second quarter.

“I wanted to see intensity and effort from the get-go,” Sentinel coach Jay Jagelski said. “I thought they did a good job of that. Defensively, we created a lot of points based off our defense. We got out and ran. That’s what we need to do. That’s what we’re always trying to do."

The Spartans had been off since Saturday, when they suffered their first loss, a 72-59 defeat at Helena Capital. They responded with their highest offensive output since the season opener, and it came in large part because of their defense.

"We challenged them to play with intensity," Jagelski said. "We were disappointed after Saturday's game, so it was about coming out here and making a statement that we are the team we think we are."

While Frohlich-Fair and Germer collected the points, Rausch, Hayden Kolb, Soren Syvrud and Zac Crews aided the cause by collecting steals or making passes in transition. Eight Sentinel players collected at least one steal, and eleven scored as they emptied the bench in the fourth quarter.

“Those guys are just as instrumental because of their defense and because of how they make the extra pass,” Jagelski said. “They really stepped up and made sure we rotated well on defense and worked the ball into the mismatches we created.

“As we develop our bench more and more, we’ll try to keep looking to pressure. We want to create an up-tempo game.

Big Sky junior Kade Olson did his best to try to keep the Eagles in the game. He scored 15 points while playing with a torn labrum in his shooting shoulder, head coach Ryan Hansen said. It was Olson’s first game back since Jan. 2, the fourth game of the season.

The Eagles were out of the game by halftime, trailing 45-19 after struggling with the full-court press. They turned the ball over 13 times in the first 16 minutes, and nine of those turnovers came against the press.

“We didn’t see the court well against their pressure,” Hansen said. “It wore us down, and the floodgates opened. It affected our entire mood out there and affected our defense. We didn’t play anything that looked like defense out there. They just did whatever they wanted against us.”