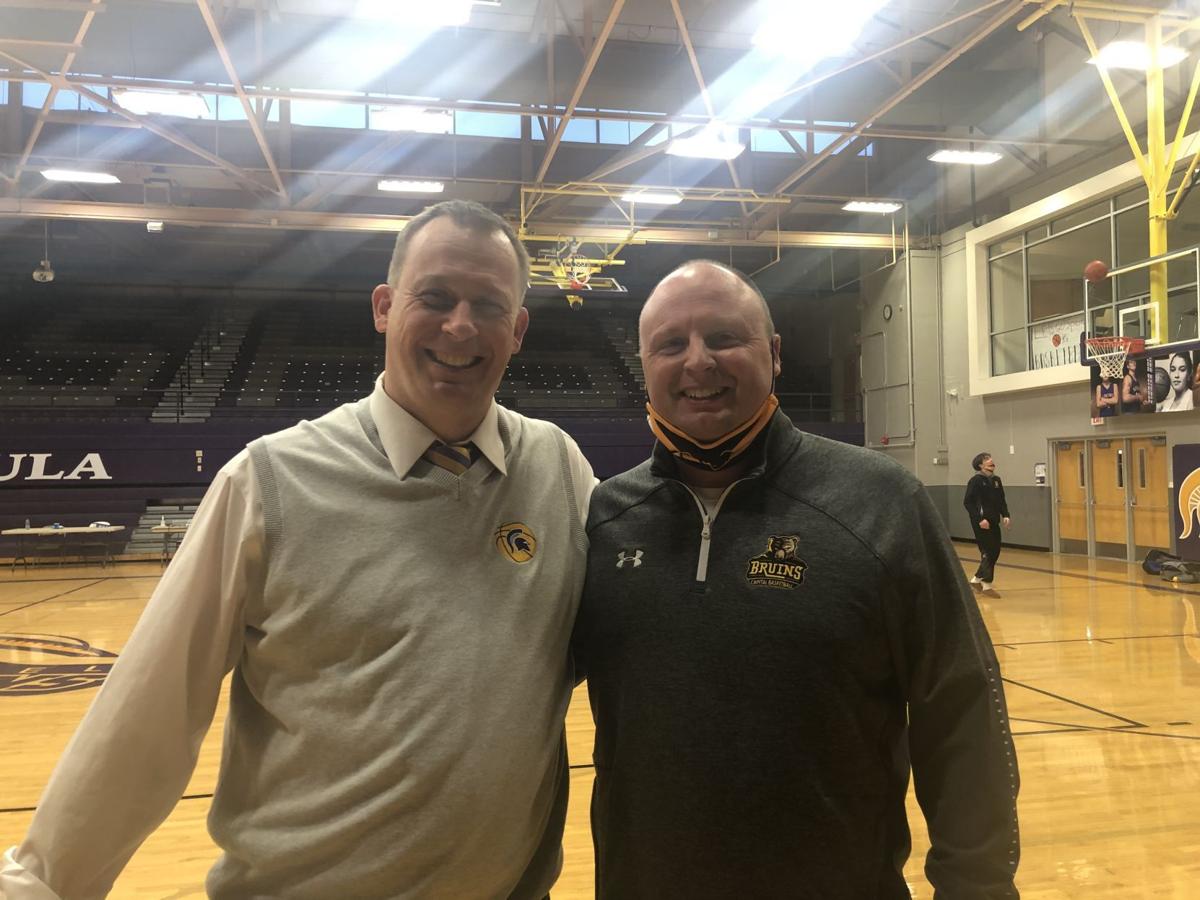 Missoula Sentinel coach Jason Maki, left, and Helena Capital coach Guy Almquist pose for a photo after the Spartans beat the Bruins on Saturday in Missoula. Maki and Almquist played together at Sentinel 31 years ago and faced each other for the first time as coaches in the gym where they were teammates. 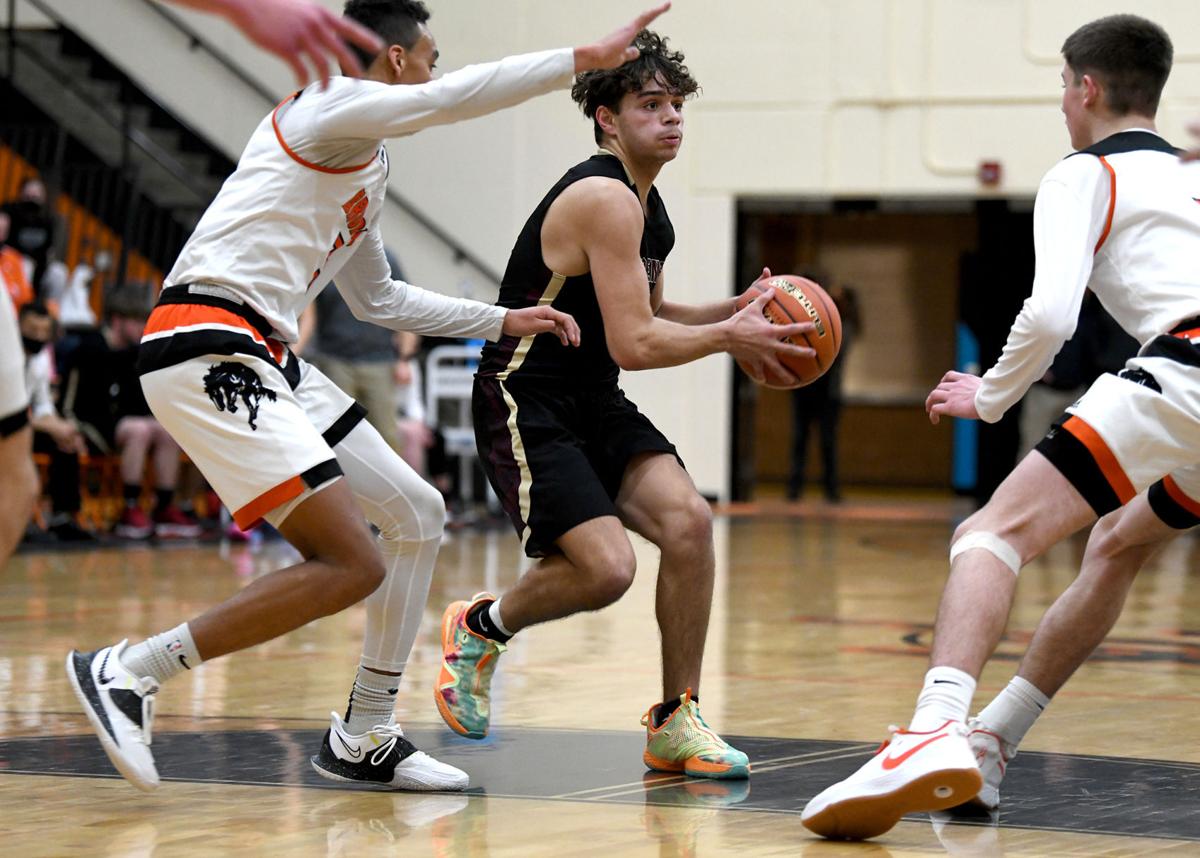 Florence’s Blake Shoupe (5) looks for an open pass during their basketball game on Jan. 8 at Frenchtown High School. The Falcons will play Deer Lodge for the Western 6-B regular-season title on Friday in Florence.

Missoula Sentinel coach Jason Maki, left, and Helena Capital coach Guy Almquist pose for a photo after the Spartans beat the Bruins on Saturday in Missoula. Maki and Almquist played together at Sentinel 31 years ago and faced each other for the first time as coaches in the gym where they were teammates.

Florence’s Blake Shoupe (5) looks for an open pass during their basketball game on Jan. 8 at Frenchtown High School. The Falcons will play Deer Lodge for the Western 6-B regular-season title on Friday in Florence.

MISSOULA — Missoula Sentinel and Helena Capital made for a reunion of sorts when their boys basketball teams squared off on Saturday in Missoula.

Sentinel first-year coach Jason Maki and Capital 15th-year coach Guy Almquist were teammates on the Spartans 31 years ago. Saturday’s game was their first meeting as coaches in the gym where they played together, and Maki’s top-ranked and undefeated Spartans emerged with a 68-51 win on their senior night.

“It was a pretty neat night,” Maki said. “We talked about it before the game, but once the game started, I knew we had to compete. We respect the heck out of Capital’s program because they work their butts off and execute well, so we knew we had to play hard. Once the ball went up, all that went out the door, but it was fun to beat him.”

Maki is now 2-0 against Almquist, having won their first meeting of the season in Helena last month. The rematch included the presence of their high school coach, Wes Appelt, who has been Sentinel’s scoreboard operator this season.

“I’ve been here so many times now that I’m pretty used to being the guy that they boo,” Almquist said with a chuckle. “I’ve got lots of connections to that staff. They’re good guys. I know they’re working hard, doing the right things. As you can see, they’re putting a good product on the court.”

Maki and Almquist played together during the 1989-90 season. Maki was a senior that year, while Almquist was a sophomore who had earned a spot on varsity, something Maki didn’t do until his junior year.

Maki went on to play basketball at Whitman College in Washington, rising to the sixth-man role. Almquist played basketball at Carroll College, where he became a Hall of Famer at the school, an NAIA All-American and a Frontier Conference MVP.

“I was a young kid playing a little varsity, and Jason actually sort of took me under his wing a little bit and befriended me,” Almquist said. “Sometimes that’s tough when you’re a young kid playing up with some older guys. He was really good to me and just made me feel comfortable. Jason’s a great guy, so I’m glad to see him get this job.”

Maki and Almquist became closer when they got into coaching. Maki spent 25 years in Oregon before returning to Sentinel this offseason. He coached at Beaverton High School for 13 years and the next 12 years at Sandy High School, where he left as the school’s all-time wins leader and 2013 Northwest Conference coach of the year.

Almquist took over at Capital in the 2006-07 season after spending eight years under Bill Pilgeram. His Bruins won the state title in 2014 and finished second in 2013. He actually alerted Maki of the opening at Sentinel after Jay Jagelski stepped down and he was contacted.

“We were friends, but we weren’t super close,” Maki said of their time in high school. “We became much closer later actually. When I was coaching in Oregon, we actually swapped stuff all the time on email and Twitter, like coaching strategies. We just asked each other questions, went to some summer camps together, like the Gonzaga team camp.”

Maki’s Spartans improved to 10-0 with the win over Capital and remained No. 1 in the Class AA rankings. They returned all five starters from a team that Almquist’s Bruins went 2-1 against last year.

“It’s good to see a Sentinel guy back in the saddle and doing a good job with them. Hopefully we can get better and give them a better game.”

“They’re just scrappy and work hard and do the right things,” the Sentinel coach said. “They got us early a couple times on their pick and roll. We were trapping it, and they made the right pass. I just think our seniors are so long and athletic that finally we imposed our will on them.”

Florence and Deer Lodge will square off for the Western 6-B regular-season championship at 5:30 p.m. Friday in Florence.

The game holds even more importance because there isn’t a District 6-B tournament this season. Teams will go straight from the regular season to the Western B divisional, and the winner Friday will have a better seed in their chase to qualify for state.

“Big-time game, true conference championship game, especially in light of no district tournament this year,” Florence second-year coach Jordan Wittmier said. “So, should be a lot of energy for it.”

Both teams will enter their final league game with 6-1 records in conference play. The Wardens’ lone 6-B loss came to Florence, 57-49, on Feb. 2 at home. The Falcons’ only conference loss came against Missoula Loyola on a buzzer-beating 3-pointer on Jan. 28.

“We snuck (out) a win at their place, so I’m sure they’ll be extra motivated for Friday,” Wittmier said. “So, I think it’ll come down to who can execute in spite of extra excitement for the game. Glad to be playing this one at home.”

Florence is 8-3 overall, with its other two losses coming to Class A teams Frenchtown and Hamilton, both on the road. The Falcons brought all five starters back from a team that went 11-8 last year in Wittmier's first season.

Deer Lodge is 9-2, with its other defeat being a one-point decision against St. Ignatius, a Western 7-B team.

“Deer Lodge is very tough minded, and their 1-3-1 is very disciplined and tough to score on, so it well present a great challenge for us,” Wittmier said. “Their guards (Ozzie King and Logan Nicholson) are scoring the ball really well right now, so defensively, we’ll have to be very locked in and make sure we contest every shot and limit them to only one shot every time down the floor.”

Missoula Hellgate grad Rollie Worster is showing he can hang at the Division I level as he’s helped the Utah State men’s basketball team ascend to the top of the Mountain West.

The true freshman is averaging 9.6 points, 3.8 rebounds and 3.4 assists per game while starting in all 19 games and averaging 27.5 minutes per game. Worster, a 6-foot-3, 200-pound guard, also has 20 total steals and five total blocks.

“Utah State’s Rollie Worster is one of the best freshmen in the country that nobody really knows about,” Rothstein tweeted on Jan. 28. “Went for 19, 9, and 9 last night versus UNLV. Remember the name.”

The Aggies are 14-5 overall and 11-2 in conference play for the league’s best record. They play at the No. 2 team in the Mountain West standings, Boise State, on Wednesday and Friday.

The Seeley-Swan girls completed a perfect regular season with a 12-0 overall record and 10-0 mark in Western 13-C play to take the league title.

The Columbia Falls girls grabbed the Northwest A crown by improving to 15-0 overall and 9-0 in conference action.

The Bigfork boys won the Western 7-B title and have now won eight games in a row to up their record to 10-2 overall, 7-1 in leagues games.

The Southwest A crown was won by the Dillon boys.

This week's area sports notebook looks at two Missoula Jr. Bruins hockey players who got called up to a higher level, and how the Bigfork boys and Corvallis girls basketball teams are putting together big win streaks after early season struggles.