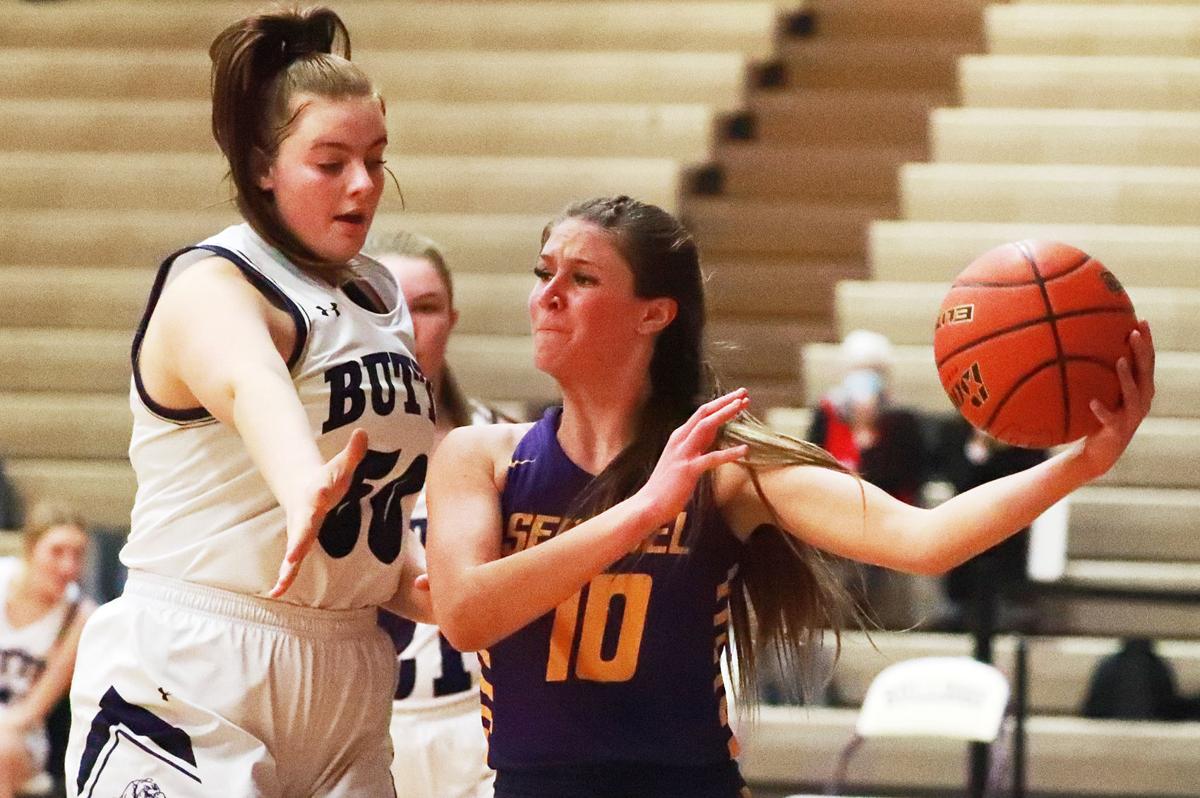 Sentinel's Kodi Fraser looks to pass the ball as Butte's Ashley Olson defends during a January game in Butte. 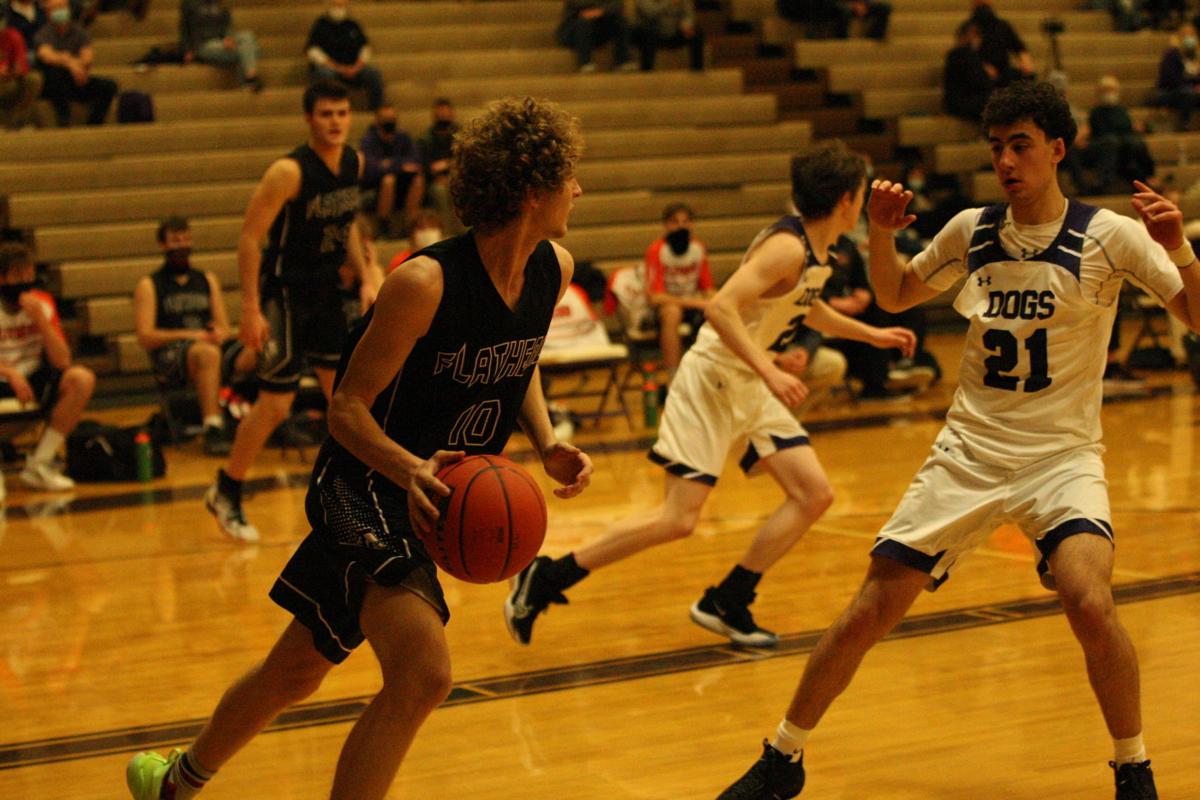 Sentinel's Kodi Fraser looks to pass the ball as Butte's Ashley Olson defends during a January game in Butte.

BUTTE — The Bulldogs’ boys and girls have a chance to extend their seasons Thursday night.

The No. 6 seed Butte girls will travel to Missoula Sentinel and the Butte boys, No. 4 in Western AA, will be hosting Kalispell Flathead in their state play-in game.

The Butte boys basketball team has not hosted a playoff game since 2008, a year after the Cole Conway-led Bulldogs finished second at the state tournament. Four fans per player, an increase from two, will be allowed to attend.

“We’re very excited. There’s a lot of advantages to having the game at home,” said boys coach Matt Luedtke. “Especially Flathead, that’s the longest road trip in the Western AA. So that’s an advantage for us, and then we’ve got the best fans in the state in my opinion. During the Sentinel game, I don’t know if it would have been any louder if the place was full. Those fans are awesome.”

The Bulldogs (7-7) come in flying high after handing the state’s No. 1 team, Missoula Sentinel (13-1), its first loss of the season last Friday.

The Bulldogs match up well with the Braves (6-7) as they posted a 2-0 record against Flathead during the regular season.

During a 77-74 barnburner back on Jan. 16, Butte withstood a huge fourth quarter by the Braves and hung on for the victory. The Bulldogs led by nine entering the final period, when Flathead came roaring back and poured in 34 points during the final eight minutes. Unfortunately for the Braves, Butte pumped in 28.

"Hats off to Flathead. We had a nice little lead there and they erased it in about 30 seconds," Luedtke said after the game. "They played hard and we played hard, we were just lucky to have scored a few more points than they did. I think our guys did what they to, to win."

During the second meeting between the two squads, it was the Bulldogs who dominated the second half en route to a 60-49 triumph on Feb. 13.

Trailing by 11 at halftime, Butte outscored Flathead 41-19 during the final 16 minutes to secure the 60-49 victory.

This time, it was Billy Kelly who led the Bulldogs with 17 points. Olson was productive as well, notching 15 points, and Kenley Leary had 10.

Joston Cripe, who torched Butte for 23 points in the first meeting, was held to 10 during the second go-around.

“(Cripe) is a really nice player and we just wanted to make sure we had a hand up on him, and knew where he was at all times in that zone,” Luedtke said. “I think, really, that if our boys just come and play hard with that same intensity, and that same will to win that they did against Sentinel, I think that that’s probably more important than anything we can do this week.”

Conversely, the Bulldogs’ girls have not fared well against their play-in opponent, the Missoula Sentinel Spartans (8-6).

But they have shown improvement of late.

“In our last couple of games, our turnovers have gone down and we’re handling the press a lot better,” said coach Maury Cook. “That’s kept us in tight games.”

After a forgettable 65-38 defeat at the hands of Sentinel on Jan. 30, the Bulldogs hung tough in a 51-41 defeat last Friday during a game that was actually much closer than the final score indicates.

“We had the lead for a brief moment there in the first half,” Cook said. “We played them tight all the way to the end. I think we were down three or four at the (start of the fourth) quarter. They just kind of increased that lead to seven and we ended up having to foul, and they made their free throws.”

Despite a misleading 4-10 record, Butte remains confident. The Bulldogs are 3-3 in their last six games and one of those losses was at the hands of No. 2 Missoula Hellgate, a team that has only lost to No. 1 Helena Capital this season. Many of Butte’s losses came during or immediately after the team was dealing with issues related to COVID-19. Coach Maury Cook says that his Bulldogs are trending in a very positive direction.

“We ended up 3-3 in the last six (games), which was basically when we got all our kids off COVID and other issues that we dealt with,” Cook said. “They’re playing really well at this point, especially defensively. I think that we’ve done a good job against some of the best teams that we’ve faced."

The boys tip-off at home against Flathead at 5 p.m. Thursday. The girls are scheduled for a 6 p.m. start in Missoula.