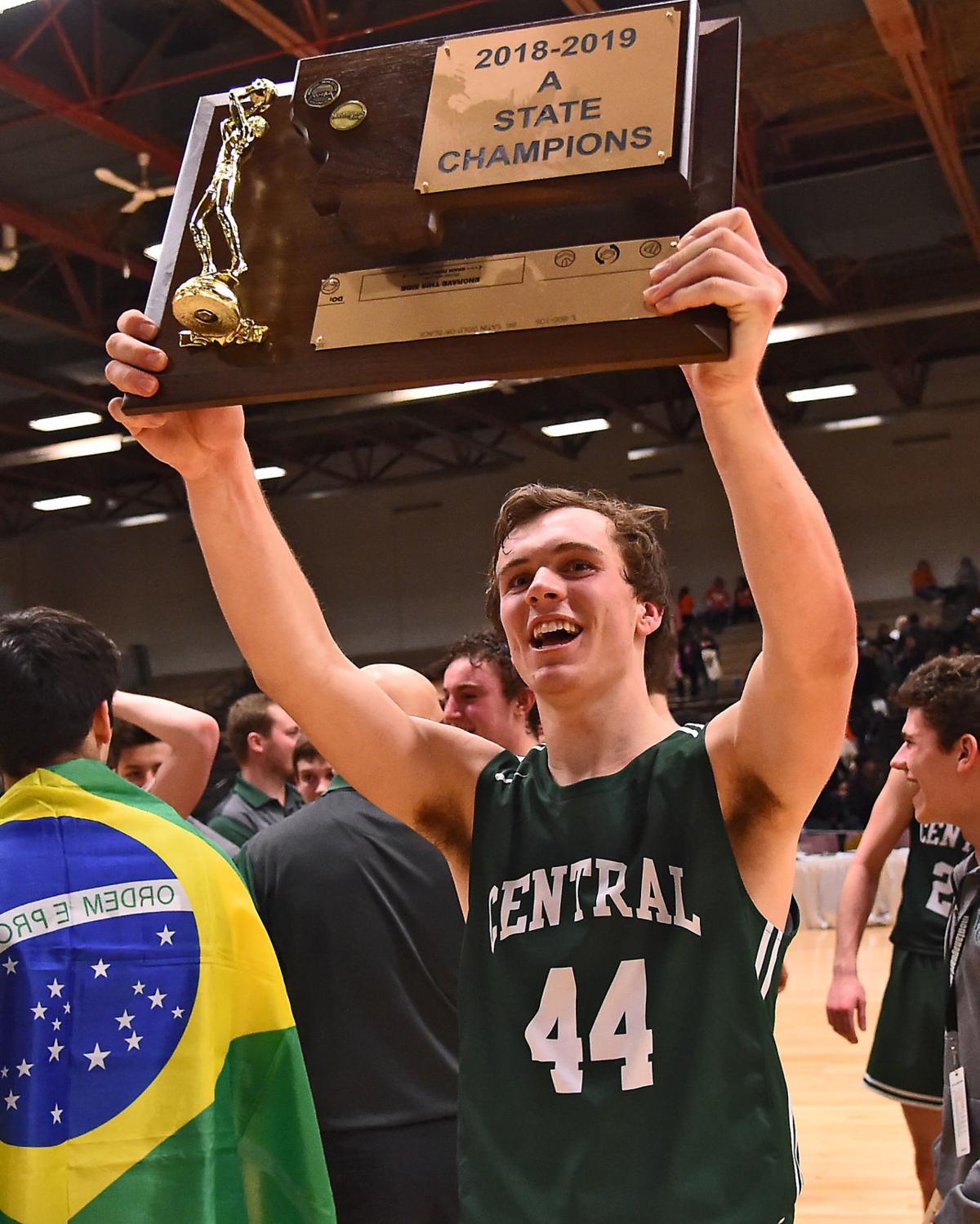 Billings Central's Joe Byorth raises the trophy in front of the crowd after the Rams won the State A boys basketball tournament. 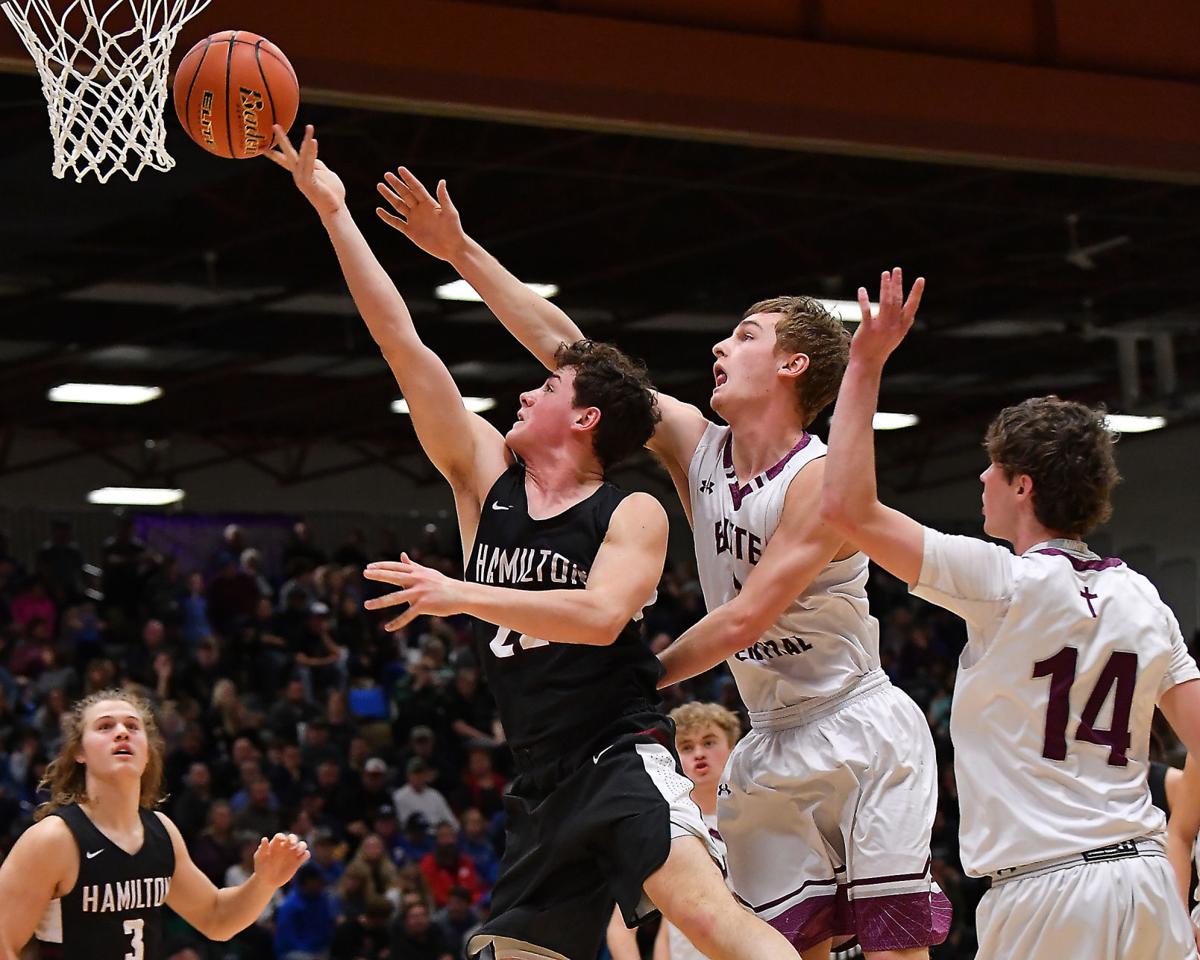 Hamilton's Hunter Omlid goes up against Butte Central's Jared Simkins during the third-place game at the the 2019 State A basketball tournament. Butte Central won 54-51 in double overtime. 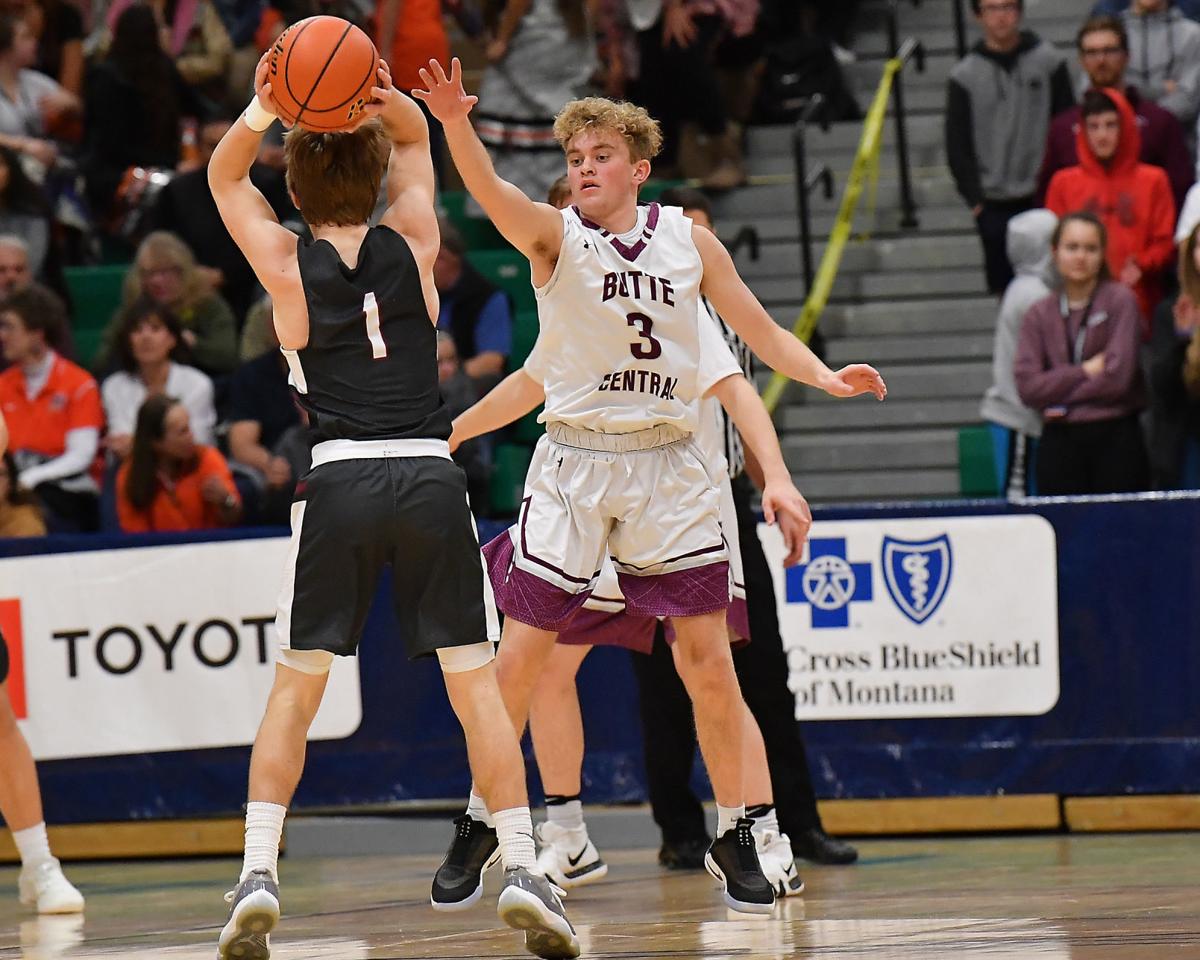 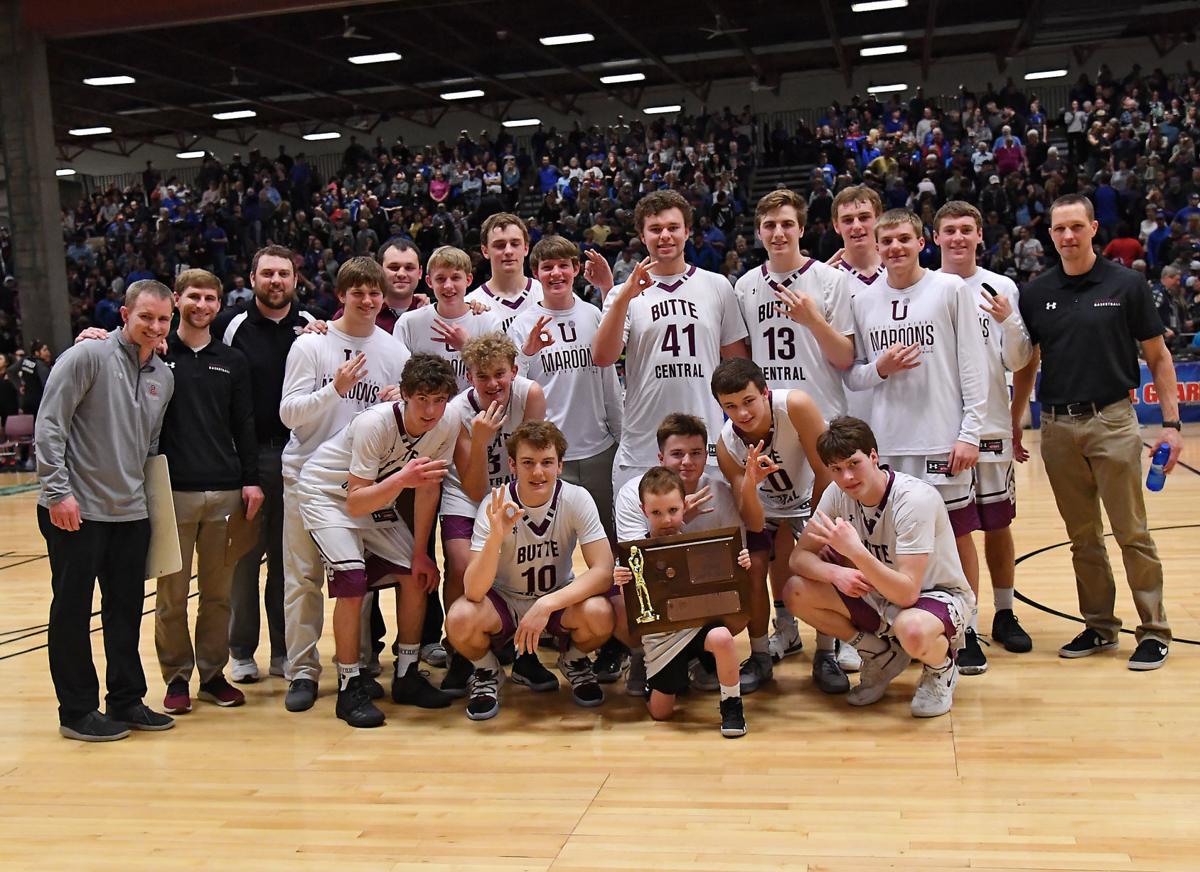 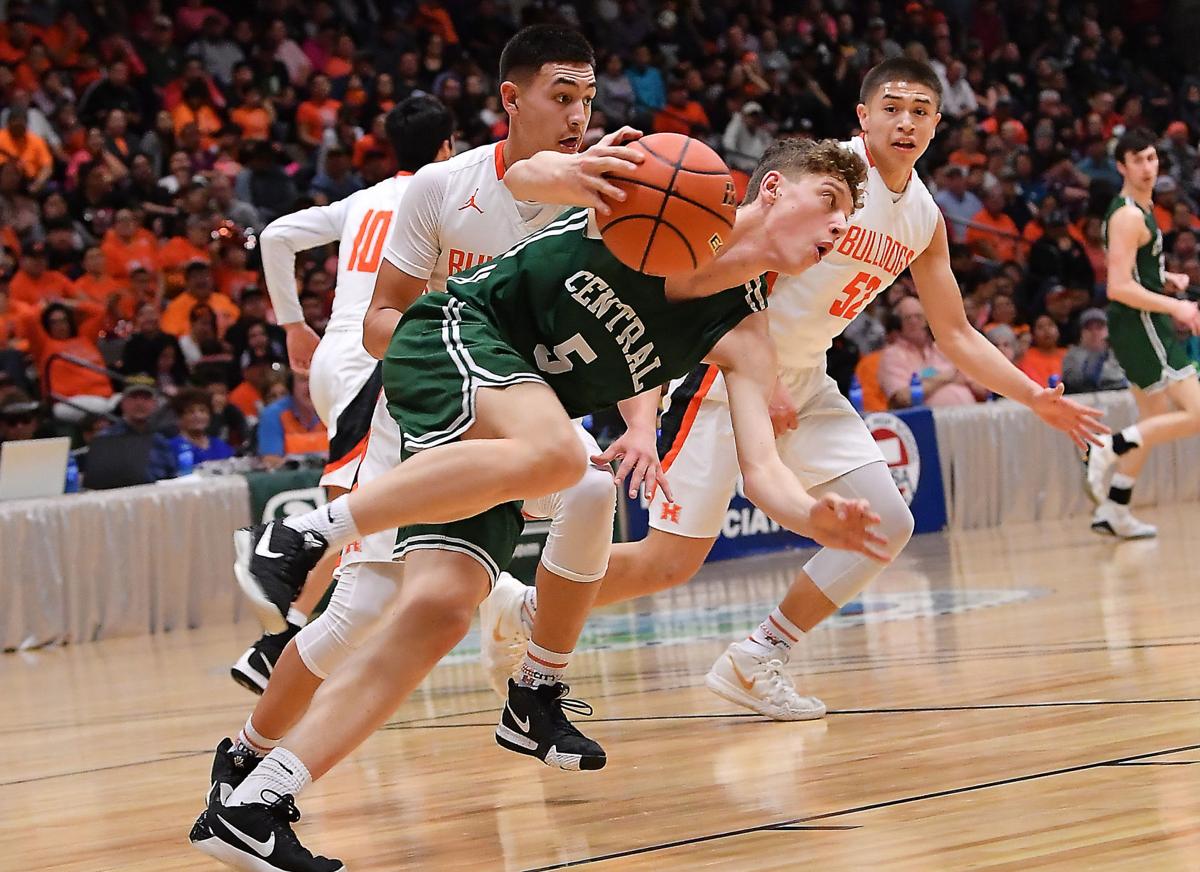 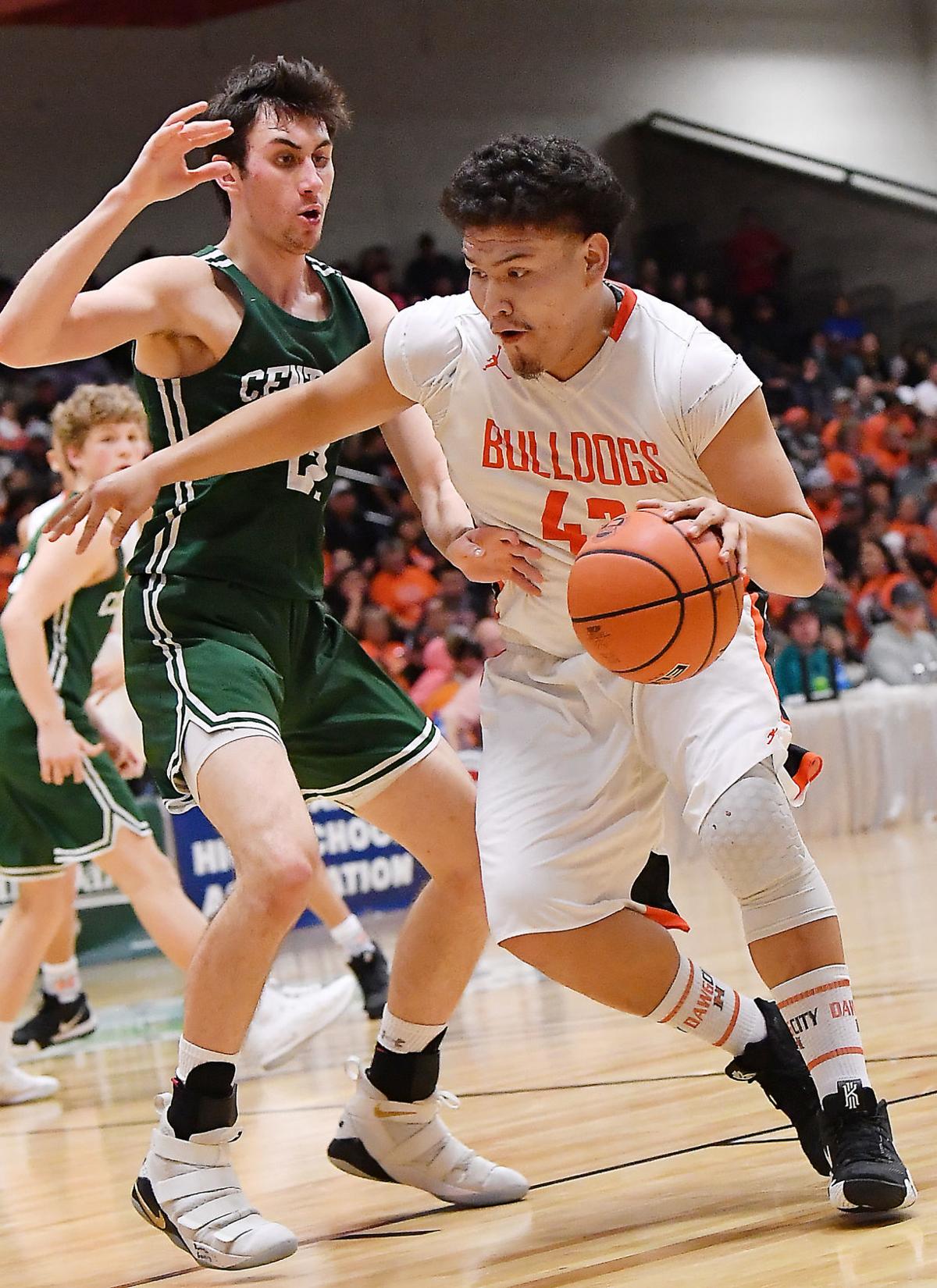 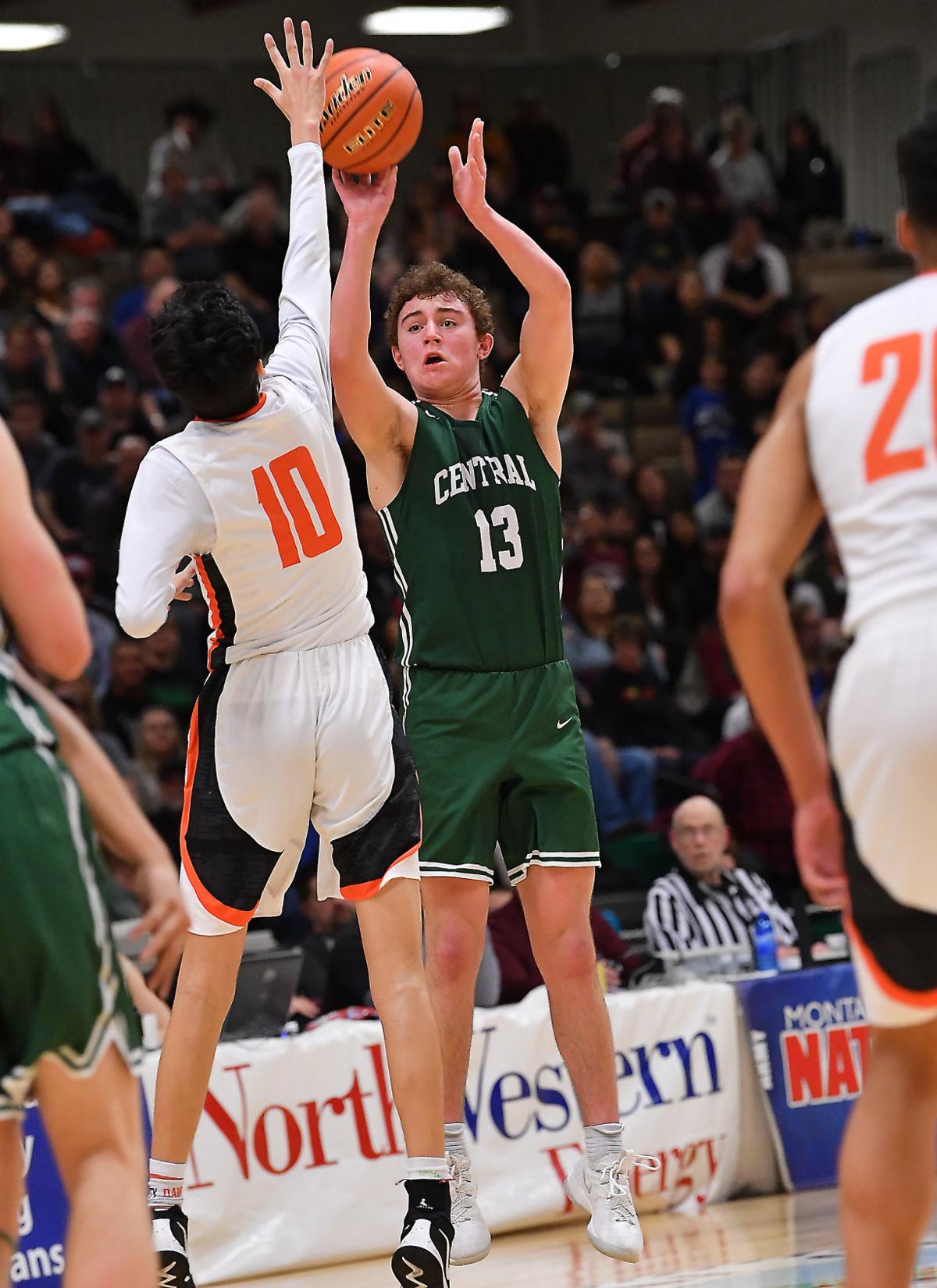 Billings Central's Seth Sasich puts up a shot over the outstretched arm of Hardin's Trae Hugs during the Class A state boys basketball championship game at Four Seasons Arena in Great Falls on Saturday night. Billings Central won the title, 62-44. 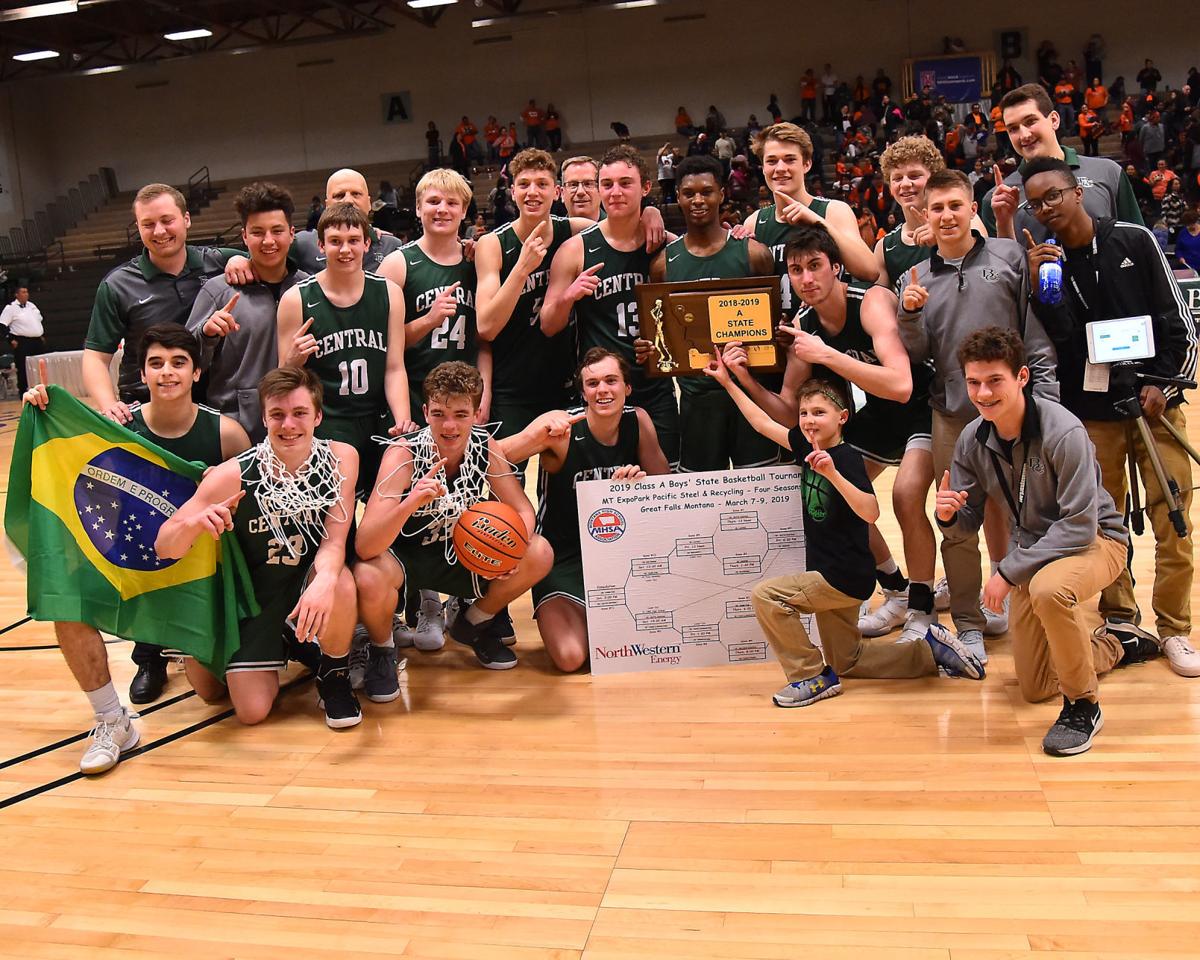 Billings Central players post with the championship trophy after beating Hardin 62-44 Saturday for the Class A title at Four Seasons Arena in Great Falls.

Billings Central's Joe Byorth raises the trophy in front of the crowd after the Rams won the State A boys basketball tournament.

Hamilton's Hunter Omlid goes up against Butte Central's Jared Simkins during the third-place game at the the 2019 State A basketball tournament. Butte Central won 54-51 in double overtime.

Billings Central's Seth Sasich puts up a shot over the outstretched arm of Hardin's Trae Hugs during the Class A state boys basketball championship game at Four Seasons Arena in Great Falls on Saturday night. Billings Central won the title, 62-44.

Billings Central players post with the championship trophy after beating Hardin 62-44 Saturday for the Class A title at Four Seasons Arena in Great Falls.

The Rams have been Class A runners-up for each of the past three seasons, but this Billings Central team broke through and denied the Hardin Bulldogs a repeat title with a 62-44 championship win at the state tournament Saturday night at Four Seasons Arena.

It’s the second boys’ title for the school, which has appeared in the title game five of the last seven years. As the final seconds ticked down, Sam Gray stood with the ball near midcourt, intently watching the clock. At the appropriate time, Gray, a senior, heaved the ball into the air and the Rams proceeded to hop up and down in a huddle at the free-throw line in celebration

“I think all three of them worked up to this,” Central senior Cade Herriford said, referring to the previous second-place finishes, two to Dillon and last year’s loss to Hardin. “This was our moment to win. This senior class has been together for all three of those years so for us coming together for this last one is nice.”

All season long, Rams coach Jim Stergar wouldn’t shy away from calling senior Chrishon Dixon the best player in the state. Stergar said Dixon proved it by putting up 21 points, several coming on aggressive drives to the basket, to go along with five assists.

He was also one of the defenders in charge of helping hold down Hardin’s Famous Lefthand, a prolific player himself. Lefthand had a team-high 13 points, but he scored eight of those in the first quarter when the game was tied 11-11. Lefthand, who left Friday’s semifinal with an injury, didn’t score in the second half.

Gray added 12 points and Herriford finished with 11 points and eight rebounds for the Rams (22-2).

“Their toughness,” Stergar answered when asked what allowed this version of the Rams to break through. “Their ability to stay in the moment and continue to do their job. They did that tonight and it’s a true testament. I mean, right there an 18-point victory is proof of how good this team really is.”

Hardin finished the season 21-3. All three losses were to the Rams.

“This was a learning experience,” Hardin coach Andrew Round Face said. “We had a fantastic season. You can’t take anything away from these guys about that. It was a great season.”

Stergar has been waiting for this moment for 21 seasons as a head coach, with stops at Ronan, Senior and Central.

“This is a representation of the Central family, and all the other teams I’ve coached were all part of this,” he said. “These guys deserve it because they put in the time. They’re talented and guess what …? It’s not coaching, this is talent.”

Some of that talent, the senior players, have been waiting for this night for four seasons. It finally arrived.

“This is a very special moment, not just for our team, but for the school,” Dixon said. “This is only the second state title, so it means a lot to the school. This is a special moment that I’ll probably remember forever.”

Butte Central’s Cade Holter spoke like a player with respective. His team had just played two games, plus two overtimes on Saturday alone, and all he wanted was more.

“It was a whole lot of basketball today,” Holter said after he helped the Maroons edge Hamilton in double overtime to take home the third-place trophy. “That’s fun. I had a great time today. I love all the overtimes because that just extended my career a little bit. But I’m glad we came out on top, it was a fun game.”

Holter and the Maroons will take hardware back to Butte for the first time since 2011. To accomplish that, they had to bounce back from a tough semifinal loss to Hardin on Friday and hold off Livingston – in overtime – Saturday morning.

Butte Central followed that with the double OT win a few hours later. No strangers to one another, this was the fifth meeting of the season between Hamilton and Butte Central, and when it was all said and done, just three points separated them in their five games.

It was the three-point difference of the second OT.

“One thing that I thought was on full display tonight was the character and toughness of our team,” Butte Central coach Brodie Kelly said. “I just love these kids to death. The effort they put in today, the fight that we had. It was so hard to win both games today in overtime and double overtime. It was just phenomenal.”

For Hamilton coach Travis Blome, whose team defeated Browning in the other morning loser-out game, he thanks his group of five seniors that helped raise the Broncs’ program another level.

“It’s so tough to say goodbye to them and where they’ve taken this program, from not going to state for over 20 years to now four times in a row with this group,” Blome said. “Really special.”

Butte Central, too, will say goodbye to a special senior group. But Holter, one of three seniors, warned others that the Maroons aren’t done yet.

“I wish I had another year with these guys because they’re going to tear things up in Class A, even in the state,” said Holter, his quiet voice a stark contrast to the revelry from Maroons’ fans that could be heard when the door to team’s locker area would open on occasion. “They’re going to be one of the better teams in the state. My message is keep working hard, give it everything you’ve got, because time waits for no man. I found that out today.”

Dylan Sestrich scored 14 points and Cade Holter had 13 to lead the Maroons in the morning loser-out game at C.M. Russell High School.

The game was tight the entire way. There were eight ties and eight lead changes, the largest lead being eight points by the Maroons.

Three players scored at least 20 points to help Hamilton come back from a slow start and eliminate Browning.

Tanner Goligoski and Trey Searle scored 21 points each and Hunter Omlid had 20 for the Broncs, who went behind 12-0 and 22-15 by the end of the first quarter. But Hamilton wound up shooting 47 percent from the field and the Broncs made 26 of 32 free-throw attempts to catch up and overtake the Indians.