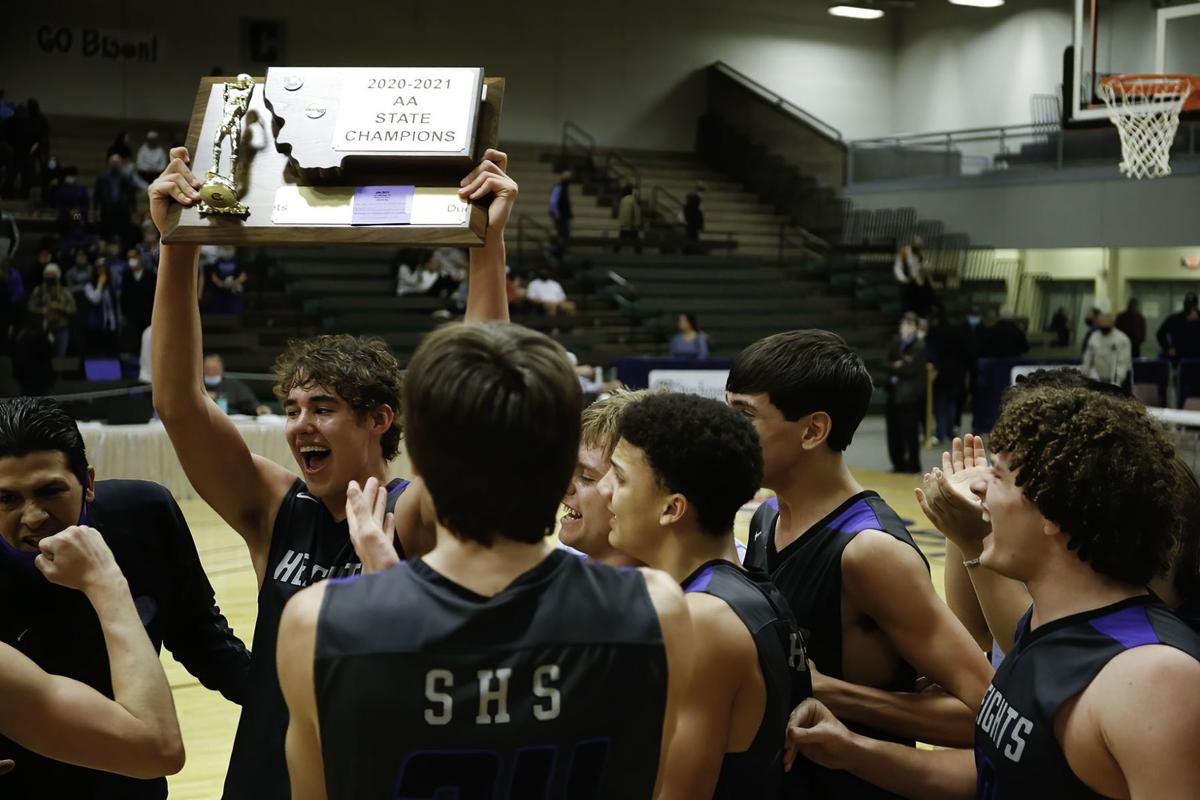 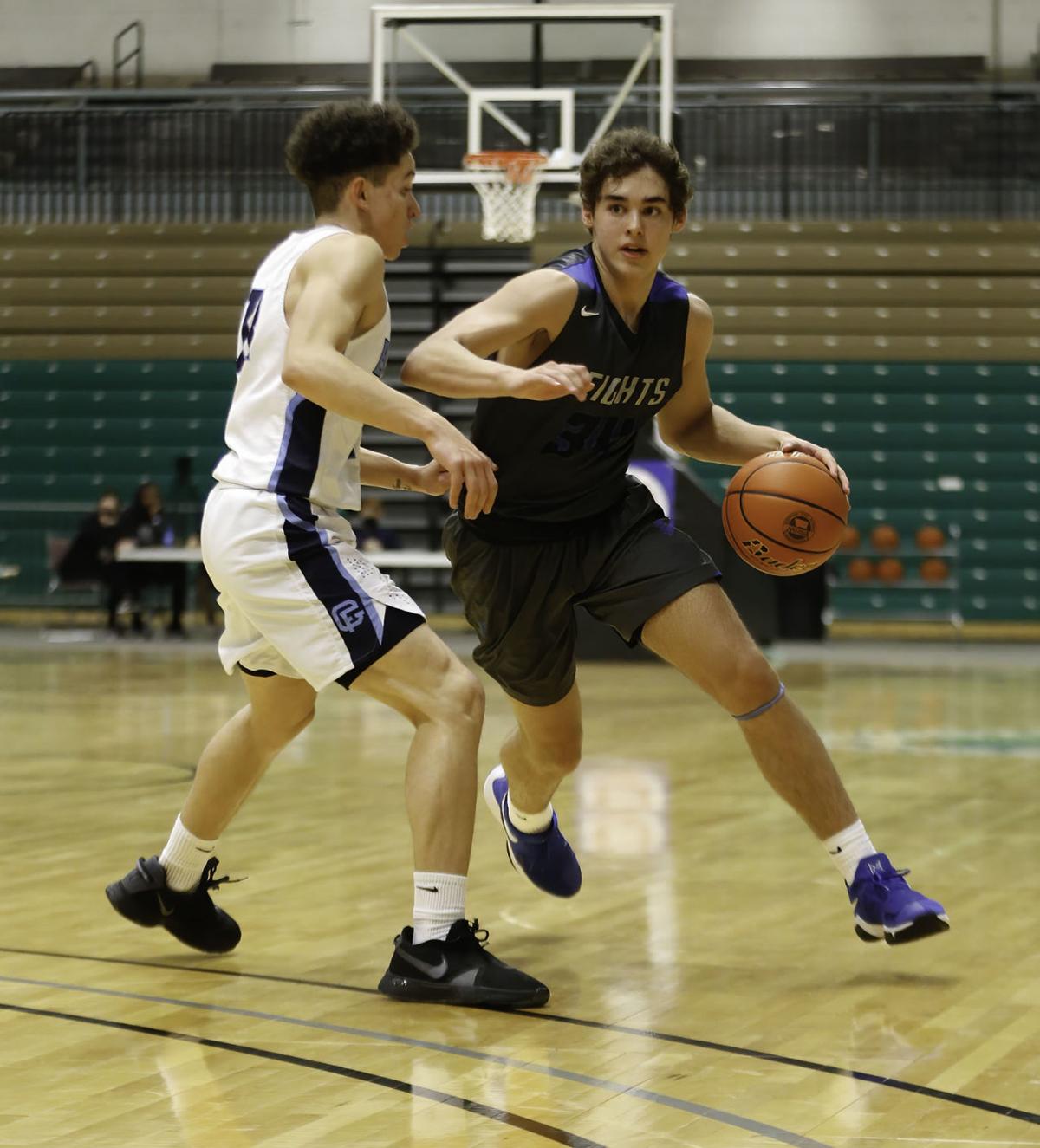 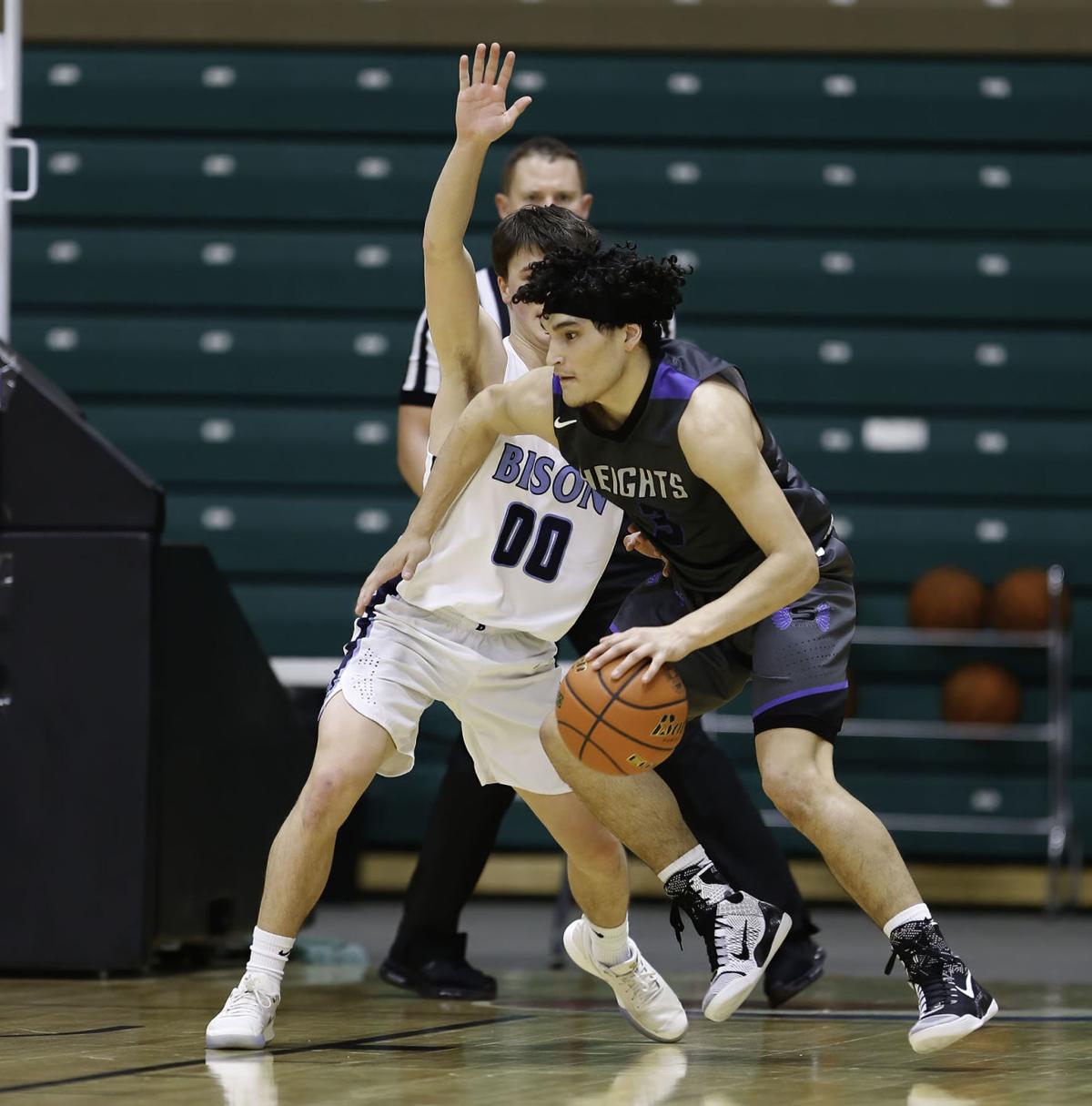 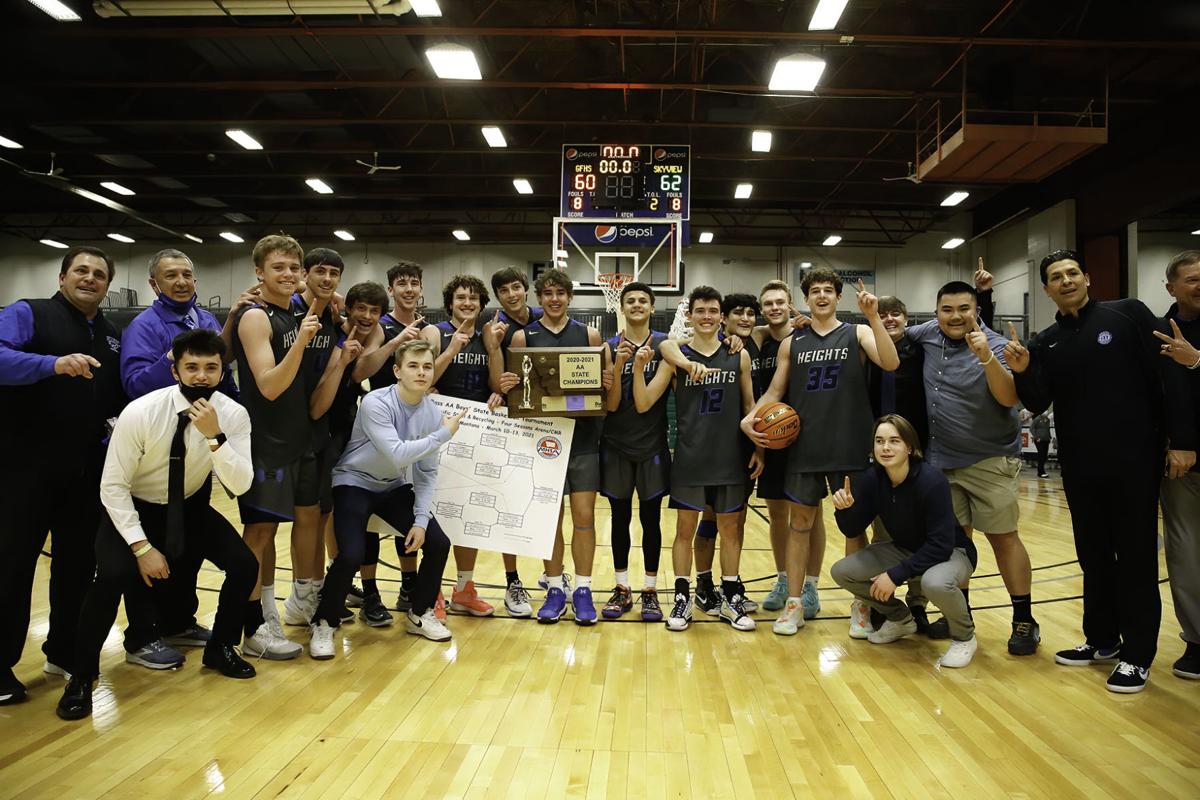 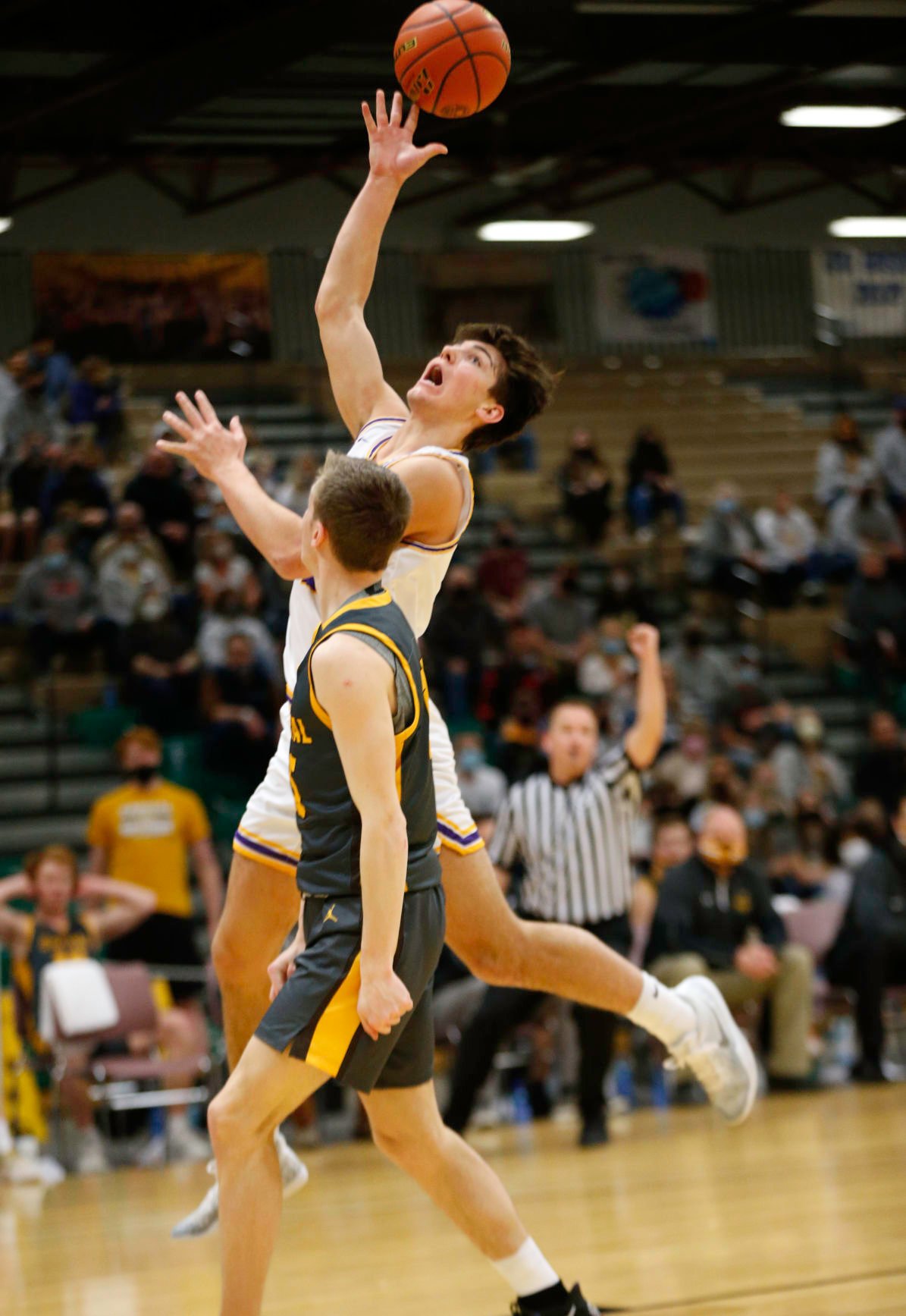 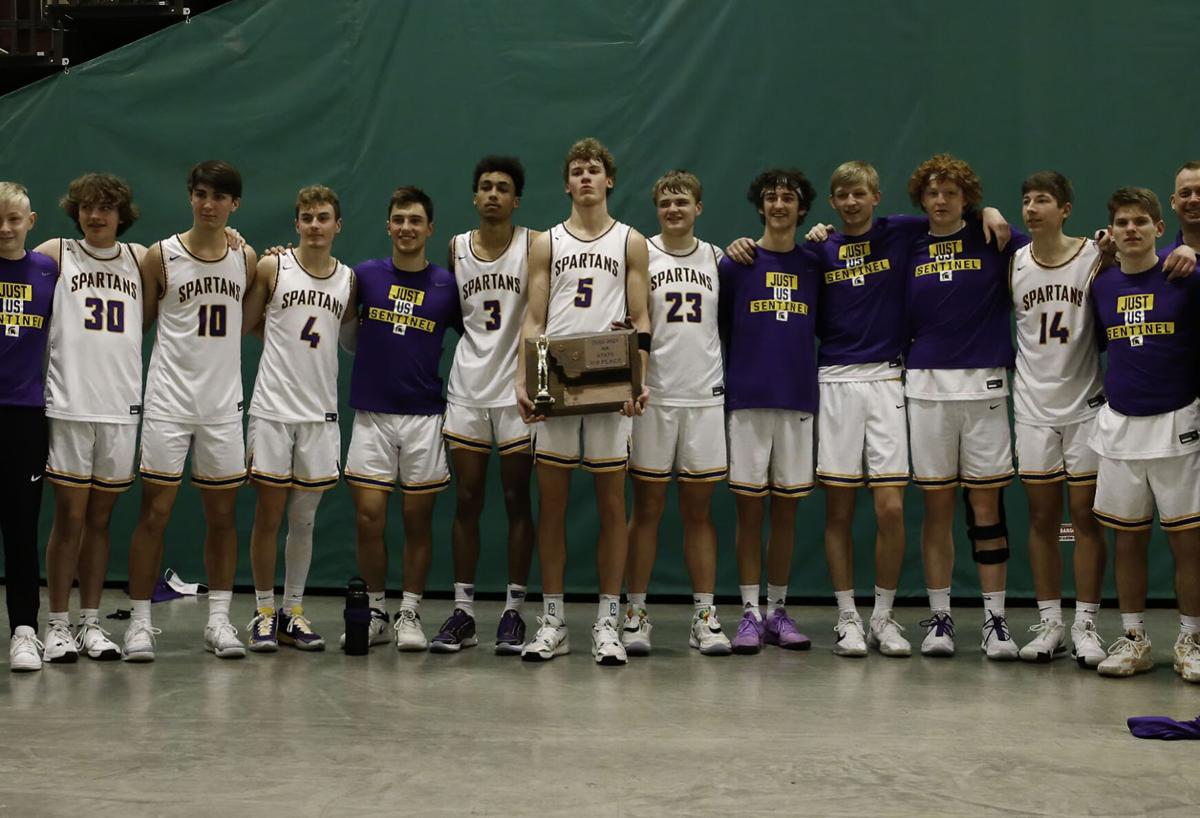 In the final 15 seconds, Payton Sanders hit a go-ahead jump shot in the lane and delivered the Falcons their fourth State AA boys basketball title via a 62-60 win over Great Falls High on Saturday night at Four Seasons Arena.

The Bison trailed by as many as 15 points in the second half but came back to tie the game twice in the final two minutes of regulation. Sanders broke the tie in both instances, determined to bring an outright title back to Billings.

The Falcons were declared co-champions a season ago when the state championship against Missoula Hellgate was canceled due to the COVID-19 pandemic.

The second half had its dreamlike moments as well. After a short burst at the end of the third quarter spearheaded by speedy Bison guard Levi Torgerson to cut the lead to single digits, Great Falls mounted a ferocious push.

Drew Wyman, who had 29 points on 11-of-20 shooting, hit his first 3-point attempt of the evening with six minutes and cut the Skyview lead to four. Moments later, Torgerson's deep 3-point shot brought the Bison within one.

Reed Harris, who had 14 points and 10 rebounds, tied the game for Great Falls at 57. The Falcons pushed the lead to three, and Wyman again knotted the game with a deep shot from the perimeter.

There was no time stoppage from Sanders' go-ahead shot until the end of the game, giving the final moments a frantic and intense feel. Great Falls had a shot attempt and an offensive rebound in the closing seconds, but did not capitalize.

"I guess we could have taken a timeout there, but we had a good look, we had a chance," Great Falls head coach Bob Howard said. "Who knows, you call a timeout and maybe you come out traveling or you never get it inbounds."

It certainly made for an intense few moments.

"The way they were hitting those shots, I said, 'If they get one up, it might go down,'" Morales said. "But thank god, we finally secured a rebound and broke that last little pressure and just finished the game off."

Both teams were allowed to be physical as officials called just 30 total fouls.

The game had a good flow, and there were several long, uninterrupted stretches of play. Great Falls had just seven turnovers on the night, while Skyview had only 12.

Sanders had 14 points, six rebounds and three assists in the victory. Kouba had a team-high 19 points.

Torgerson had 14 points and played all 32 minutes for Great Falls.

It is the fourth state title for Skyview, all of which have came under Morales in the last seven seasons. It was, however, the first time the Falcons have won a state title in their dark grey "Heights" jerseys.

"They're our favorite jerseys, we saved them for the chipper," Kouba said. "We knew we were going to be here."

Payton Sanders hit a jumper in the lane for a go ahead shot after Wyman tied the game at 60.

Great Falls had a chance to win or tie, but it’s attempt fell short. #mtscores pic.twitter.com/ooX0Rc2OlK

After a disappointing semifinal exit, Missoula Sentinel rebounded with a strong consolation-bracket effort Friday and took down Helena Capital 61-52 in the third-place game Saturday afternoon.

It is the first boys basketball trophy heading back to Sentinel since a runner-up finish in 2008. Tony Frohlich-Fair led the way with 21 points on 7-of-12 shooting from the field to go along with five rebounds and six assists.

TJ Rausch turned in a particularly good game for the Spartans too, hitting 8 of 12 shots for 17 points and adding six rebounds and a pair of assists.

"The guys, they care," first-year Sentinel head coach Jason Maki said. "They've cared all year, they care about each other and they care about putting a good product on the floor and playing together."

Sentinel, which looked like the favorite going into the tournament, was knocked out in the semifinals Thursday against eventual champion Billings Skyview. The Falcons frustrated the Spartans and took away much of what worked for them on offense during the regular season.

Other teams were able to employ similar strategies with various levels of effectiveness, but perhaps the biggest change for Sentinel was the physicality of the tournament. That caused adjustments too, and the Spartans started to find their groove in the two consolation games.

"We're at the state tournament, refs are going to let us play, the refs are going to let people play physical," Frohlich-Fair said. "I think for me and Alex (Germer) that was the main thing. We were getting attacked by multiple guys every play, so it was just being able to finish through contact and kicking to our guys and having them hit open shots."

As the Spartans left the floor, it was something of an end of an era. Sentinel brought 10 seniors to the tournament and will not return much production next year.

Mainstay players such as Germer, who is headed to the Montana State men's basketball team, and Frohlich-Fair will be gone, as will Hayden Kolb, and Soren Syvrud and Rausch, among others.

Frohlich-Fair said he has garnered significant interest from Frontier Conference and junior college teams and wants to take some time to weigh his options before committing. Rausch and Syvrud are headed to the Montana football team.

It'll certainly be a tough goodbye for Maki.

"I couldn't ask for much more, it was awesome," Maki said. "The whole community embraced us coming back, and for me personally, it's just amazing to have that group of kids.

"Just love this group of kids."

On the other side, it was a tough end to a good tournament for Helena Capital. The Bruins lose just four seniors and, perhaps most importantly, bring back standout Brayden Koch.

Koch had 25 points and four rebounds. He appeared to have a significant arm injury in the closing minutes of the game and did not re-enter the contest.

"This experience goes a long ways to kind of setting that foundation for next year," Helena Capital head coach Guy Almquist said. "Hopefully, you know, this kind of not getting that trophy we wanted kind of leaves a burning desire in our kids to get better."

Germer had a quiet high school finale, scoring just six points on eight shots, though he hauled in 10 rebounds and dished out three assists.