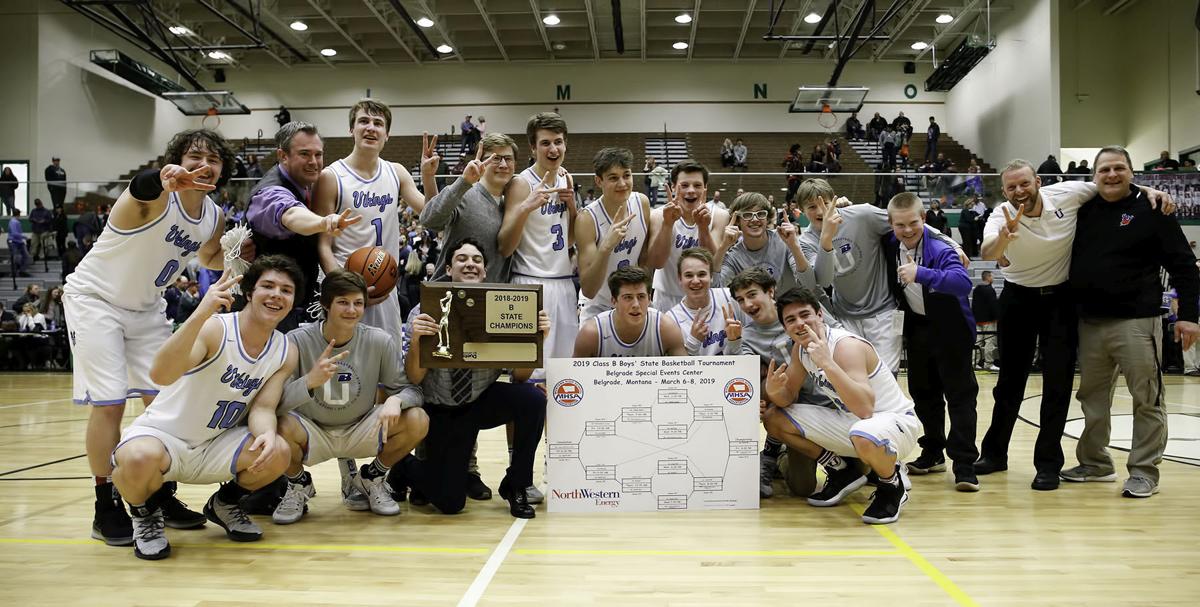 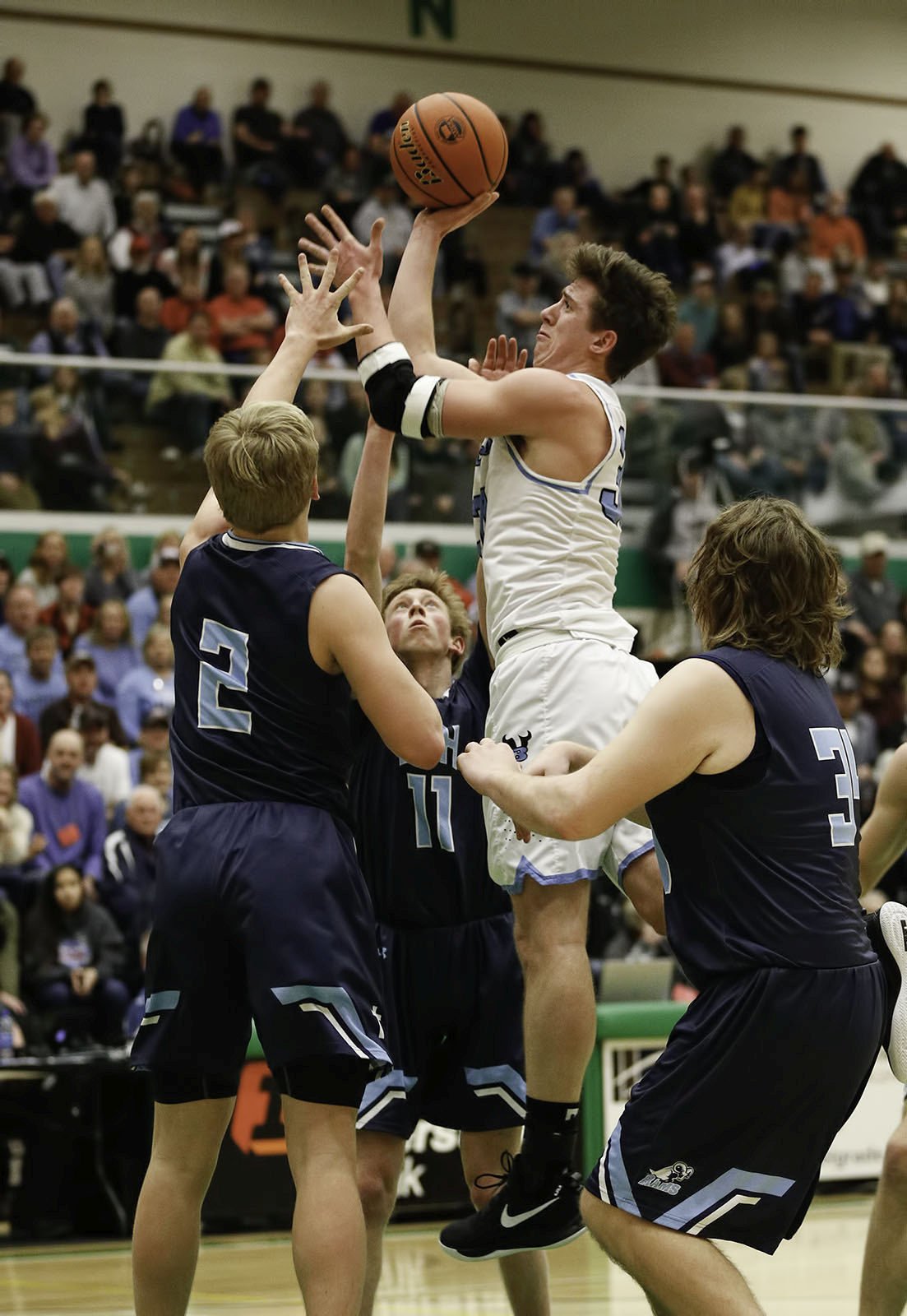 Bigfork’s Logan Gilliard goes up over Loyola defenders for a basket. 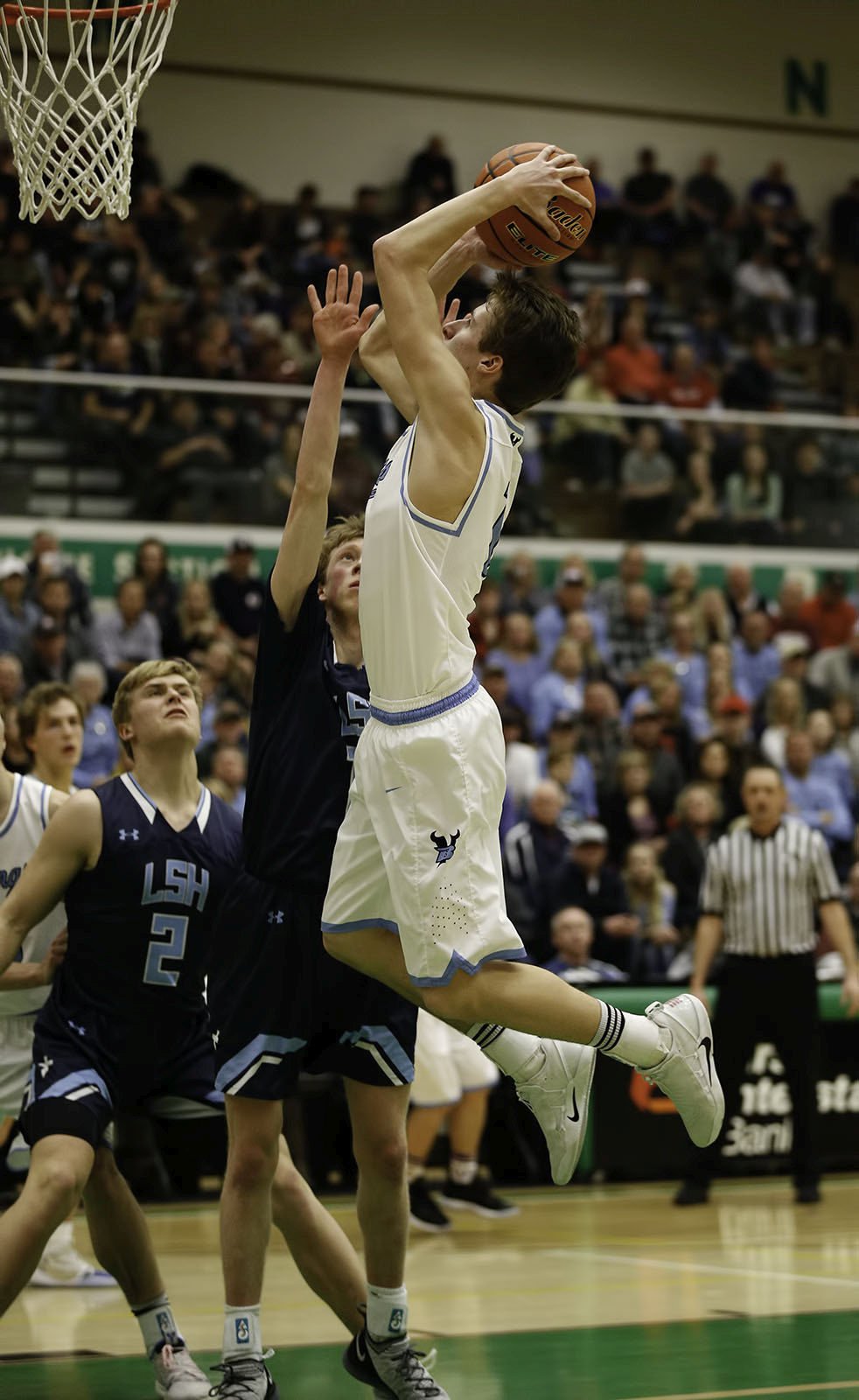 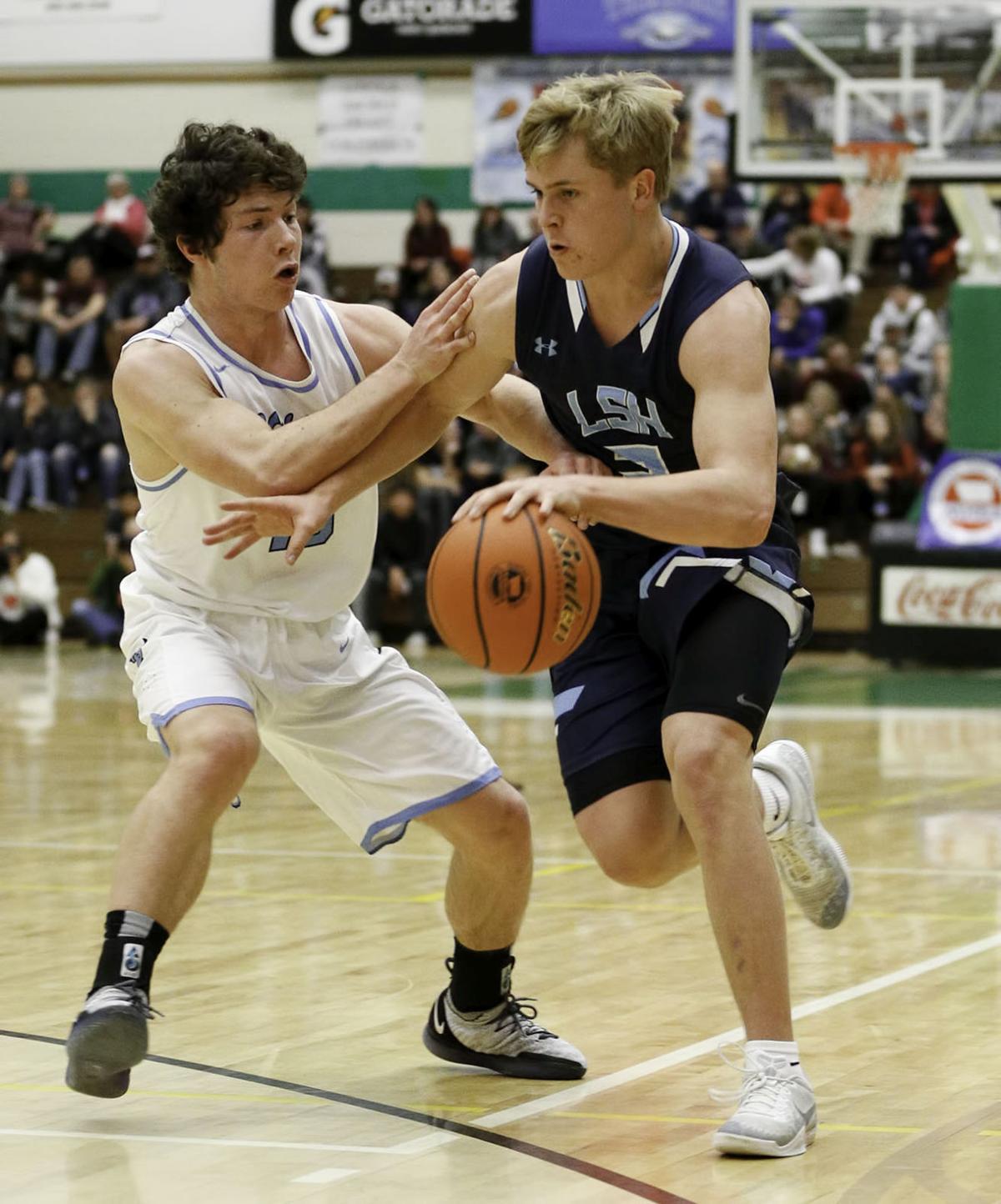 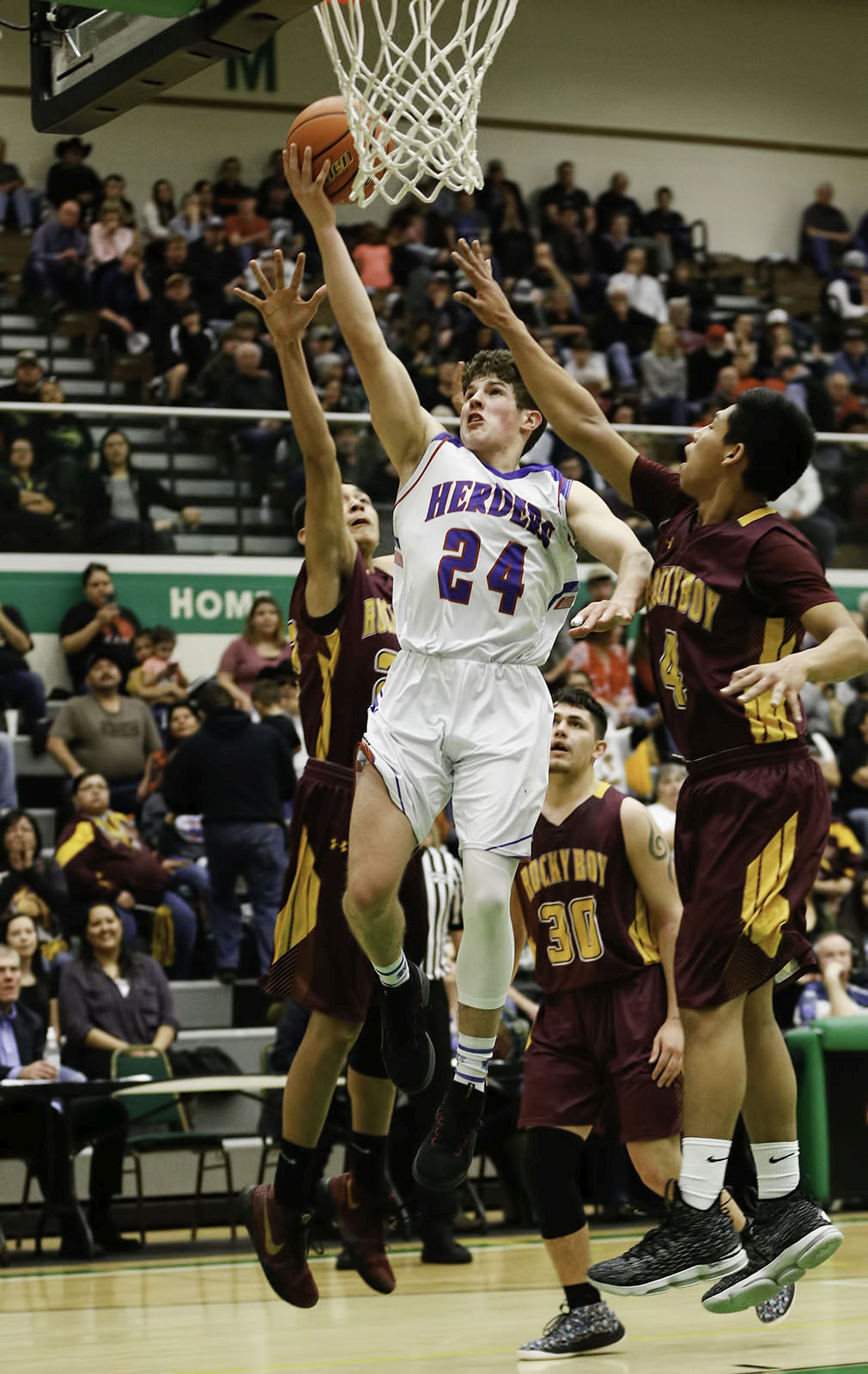 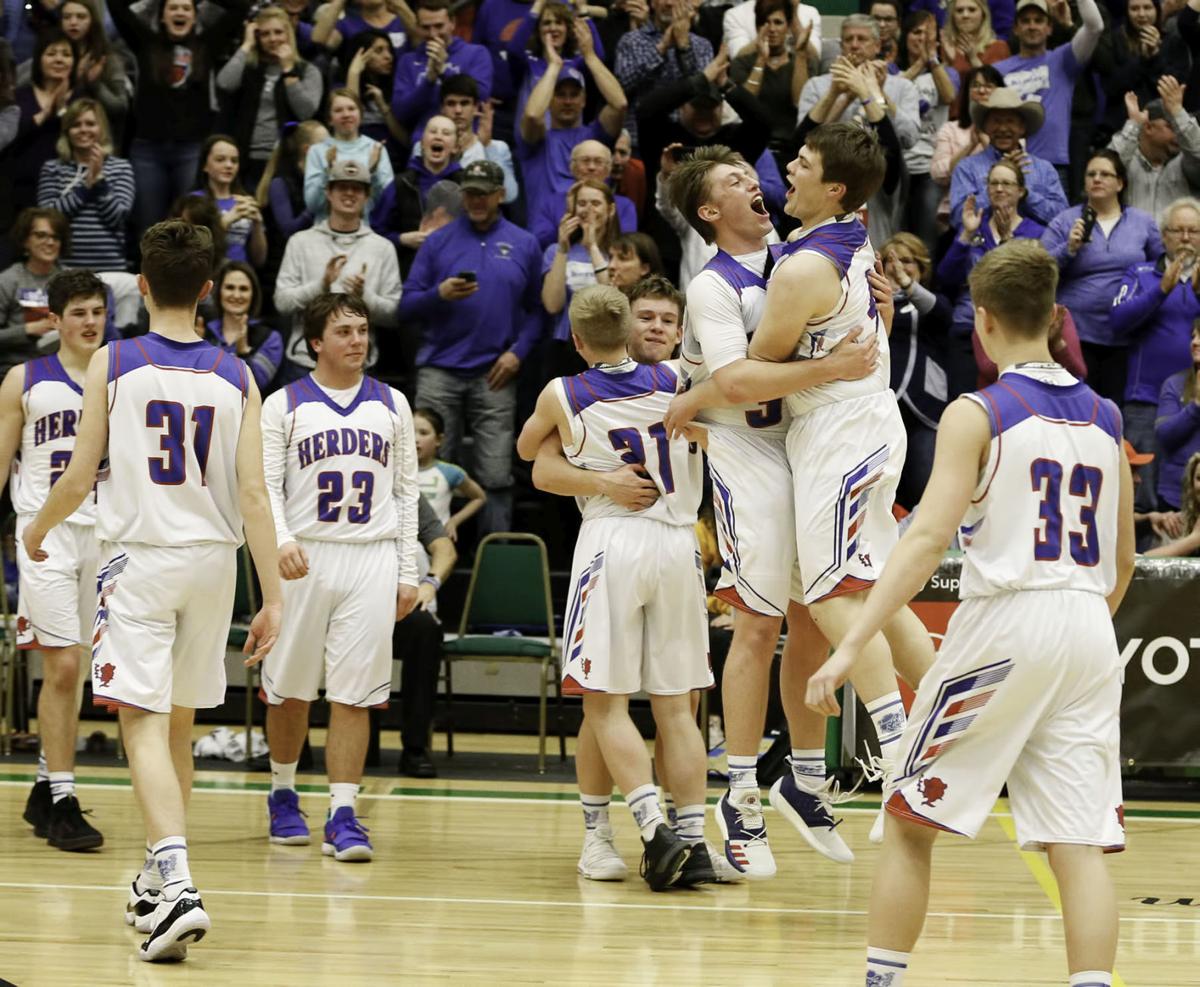 Big Timber celebrates taking third place in the Boys State B Basketball Tournament on Friday -- the Herders' first trophy since 1981. 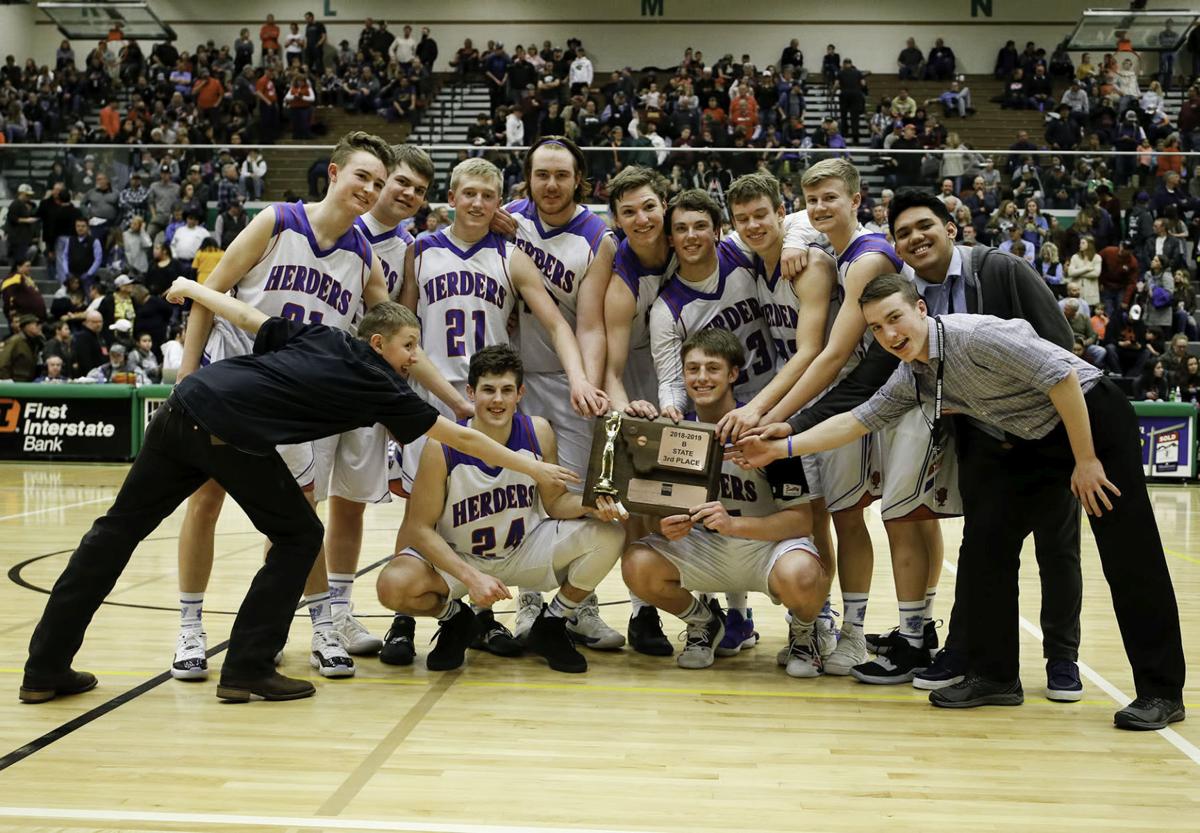 Bigfork’s Logan Gilliard goes up over Loyola defenders for a basket.

Big Timber celebrates taking third place in the Boys State B Basketball Tournament on Friday -- the Herders' first trophy since 1981.

BELGRADE — The first time was perfect. The second time was even better for the Bigfork Vikings and their eight seniors.

Wearing a scarlet-and-blue bull's-eye on their backs all year, the Vikings went on a 17-2 run to close the third quarter and held off every Missoula Loyola charge thereafter for a 47-43 victory Friday night for their second consecutive Class B boys basketball championship and third overall.

"It's great," said senior guard Anders Epperly, the team's quarterback and the state's No. 2 all-time assists leader. "This year was such a challenge. Every night we got everyone's best shot. Teams were trying to beat us. But I love this group, man. You can see how we close. We stuck together, we know how to win, I love this group. It was awesome."

Between photo ops and hugs on the Belgrade Events Center court, fellow senior Logan Gilliard was holding tight to the 2019 state trophy. A friend tried to swipe it from him but he was having none of it.

"Second time holding this baby, it's awesome," Gilliard said, adding: "I love this group of guys. I wouldn't want to win with anybody else. I don't have any other words to say other than it was awesome."

In the first-ever meeting of Western B teams in the state final, Bigfork trailed 28-19 before embarking on its game-changing run to lead 36-30 with eight minutes remaining. A key to the run was a fourth foul called on Loyola point guard Jacob Hollenback, whose absence led to a string of turnovers that turned the tide.

Hollenback returned and hit the first five points of the fourth quarter for Loyola, but Bigfork managed to keep the Rams at arm's length. Clayton Reichenbach scored 14 points and Logan Gilliard added 13 for Bigfork.

"We ground that one," Vikings coach Sam Tudor said. "That was just heart and soul. I got to give it to Loyola. That was one of the finer teams we've played — if not the finest. They were amazing."

Senior Jack Lincoln scored 16 points and fellow senior Cooper Waters added 10 in Loyola's bid to win its first title in three tries. The Rams fell to Choteau in 2015 and Chinook in 1968.

"It's hard to sum it up right now," Loyola coach Eddie Stack said outside his team's locker room, where his players emerged with red eyes. "We just had a couple balls squeeze out of our hands and they made just one or two more plays than we did on the night. All the credit in the world to Bigfork. They beat us three out of four times this year and they're very deserving. They're a well-coached team with a lot of good players."

Waters scores on FB and Loyola up 19-8. Rivalry adding spice to this one. #mtscores pic.twitter.com/3ajDjmwfAO

The Rams raced out of the gate, taking a 15-4 lead as Bigfork struggled to make shots. It was 25-19 at halftime and Loyola scored the first three points of the second half before Bigfork hit stride en route to a memorable encore for its unbeaten 2017-18 season.

"This year was special," Tudor said. "This bunch of seniors they're just such good kids. I get choked up talking about them."

There were cheers and tears inside the Big Timber locker room and outside.

Seven seniors closed their careers with the school's first trophy since 1981 after pulling away late from Rocky Boy for 53-38 for third place.

"It's means everything — it's crazy," said one of those seniors, Kell Schwers, who scored a game-high 26 points and had three coast-to-coast steals for baskets in the fourth quarter. "We knew we deserved hardware and it means everything that we won our last game."

As they waited outside the locker room, parents embraced and then cheered robustly as the players emerged with mixed emotions.

"It's bittersweet," Schwers said. "It was the last game for our seniors. But we got the win. Our last game was a win."

They did it with a relentless 22-5 fourth quarter that turned a two-point Rocky Boy lead after three quarters into a double-digit rout.

Schwer's first coast-to-coast romp after intercepting a pass made it 33-33. Moments later, he picked a Rocky Boy guard's pocket and went the length of the floor again for a lead the Herders wouldn't relinquish.

"Them are back-breakers," Big Timber coach Dan Smart said. "It was good to see him take over when we needed him to."

"I just got in a different zone," said Schwers, who plans to play collegiately but isn't sure where. "Needed to make plays to win the game, you know? I was tired from this morning (a 61-52 win over Colstrip) so I just gutted it out — we gutted it out."

Ethan Bullock scored 18 points, Blake Finn had 15 and Kell Schwers 11 as Big Timber moved into the third-place game with a victory over Colstrip.

Big Timber led 38-26 at halftime and saw Colstrip cut the margin to four at the end of the third quarter before pulling away. Kobee BigBack had 15 points, Bo Vocu 12 and Kellen BigHead and JT Baer 10 apiece for the Colts, who spent most of the season at No. 1 and entered the tournament unbeaten.

Wyatt Caplette led four players in double figures with 18 points as the Stars advanced to the third-place game against Big Timber.

Jordon Tyner scored 16 points, Frankie Bacon added 15 and Blake Cantrell had 13 for Rocky Boy, which outscored the Indians 26-11 in the third quarter to take a 14-point lead.