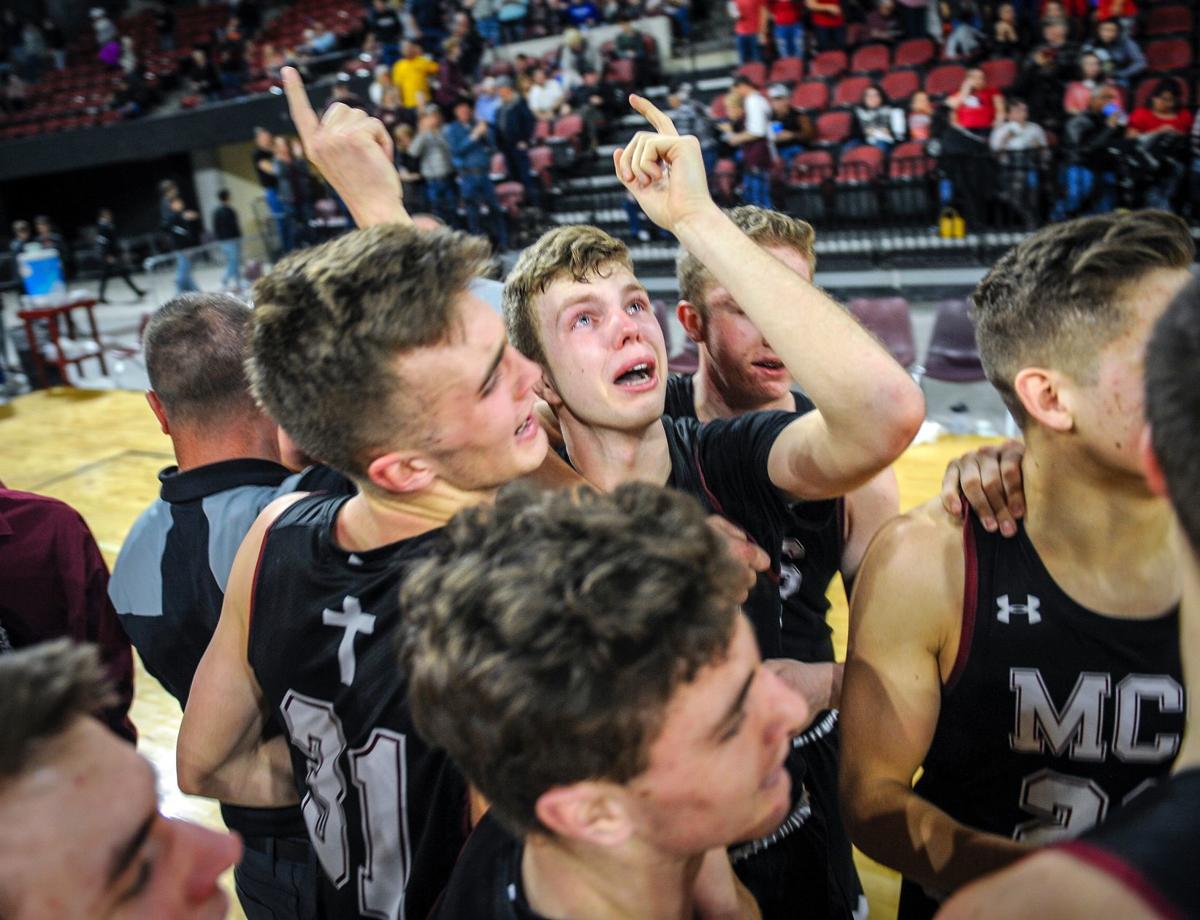 Jubilant after a victory over Arlee in the championship game of the State C tournament, Manhattan Christian celebrates Saturday at Rimrock Auto Arena at MetraPark. 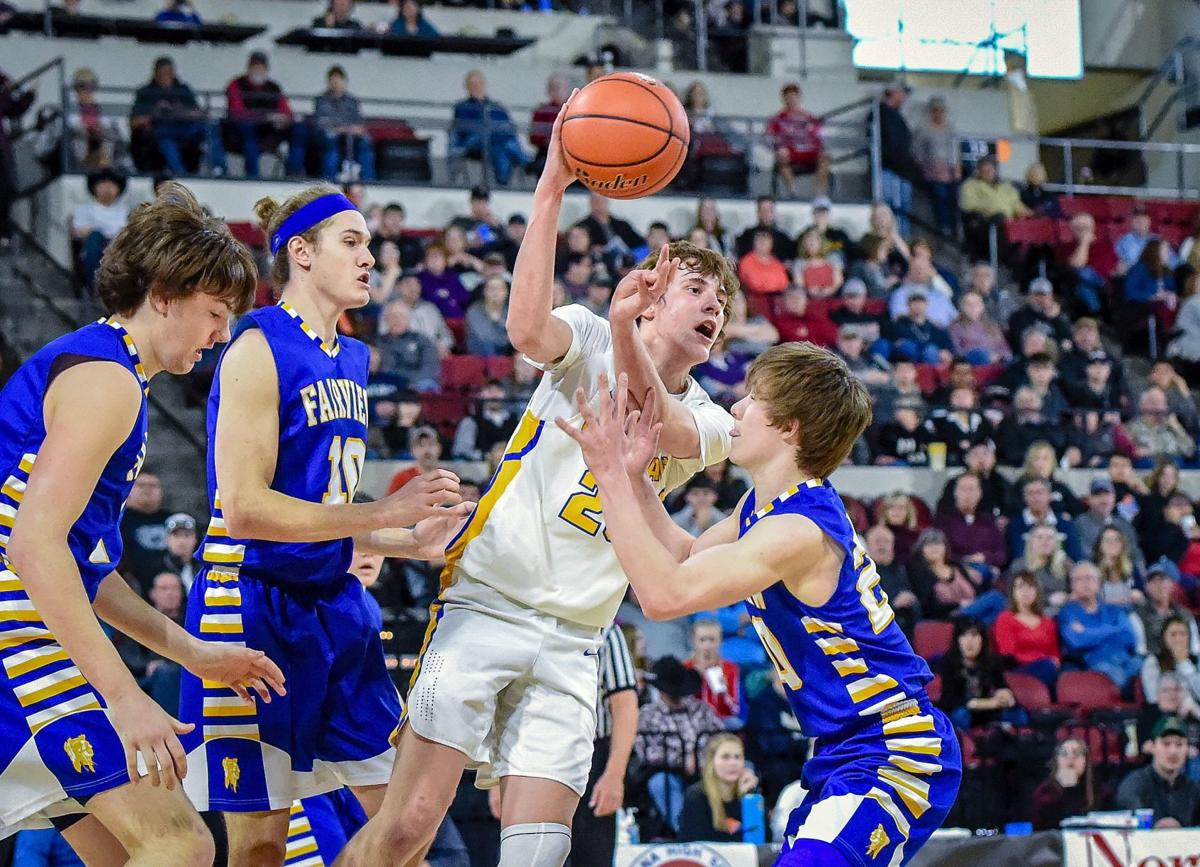 Jubilant after a victory over Arlee in the championship game of the State C tournament, Manhattan Christian celebrates Saturday at Rimrock Auto Arena at MetraPark.

It was a long time coming, but the third time was certainly a charm for the Eagles, who finally captured the Class C state boys basketball championship Saturday with an 83-51 victory over Western division rival Arlee at Rimrock Auto Arena at MetraPark.

With the win, they exorcised their tournament demons: Arlee had beaten the Eagles in each of the previous two championship games. But in the third consecutive title-game meeting between the same teams — an occurrence that had never happened before — the Eagles wouldn’t be denied.

“It’s amazing. I can’t describe it in words,” said Bellach as he wore a championship net around his neck. “All four years this is what we dreamed about. To come out on top like this, there’s no better way.”

Arlee (24-3) was making its fourth consecutive championship game appearance. A third straight title victory wasn’t to be, though the game remained close through the early going.

Manhattan Christian jumped out to an 11-3 lead, but a Greg Whitesell basket in transition pulled Arlee within three at 19-16 at the 6:45 mark of the second quarter.

Bellach made a strong post move and converted a three-point play at the 5:50 mark to put Manhattan Christian back ahead 24-16. Whitesell answered with a 3-pointer from the left wing but Bellach hit a jumper on the Eagles’ next trip down the court to keep Arlee at bay.

After an Issac Fisher miss, Bellach found David Aamot with a one-handed bounce pass in transition and Aamot finished with a layup to give the Eagles their biggest lead to that point, 30-19.

Bellach, a 6-foot-6 senior who’s headed to play at Montana State next season, played with a major sense of urgency. His drive and bank-shot with under a minute remaining in the second quarter made it a 42-29 game.

That was followed by a 3 from Amunrud that gave the Eagles a 45-29 advantage. At that point it was mathematic. Amundrud added four 3-pointers and 20 points.

“The kids just really came out ready to go,” Manhattan Christian coach Jeff Bellach said. “They executed what we wanted.

“It’s been a long time coming, and I think coming into the game Manhattan Christian was 1-6 in title games. To get over that hump is just a special feeling and it means a lot for our community.”

“He’s big and he’s athletic and he can shoot over the top of a lot of guys,” Arlee coach Zanen Pitts said of Bellach. “We got in foul trouble, and it made it really tough for us to body him up. He’s balled out. They’re 26-0 and they’re the champs.”

Whitesell had 18 points to lead Arlee before fouling out. Cody Tanner added 10 points for the Warriors.

It was a difficult ending for Arlee’s seven seniors, who helped the program reach unparalleled success.

“The part that hurts the worst is when you lose seniors,” Pitts said. “It’s the end of a ride with a group of kids that you’ve fallen in love with. It’s very emotional. But the loss stings only so much. It’s been a special run.”

While Arlee and Manhattan Christian are championship game mainstays, Scobey is not stranger to Saturday night at the state tournament, either.

The Spartans came into the tournament undefeated with their eyes on winning a state title, but a first-round loss to Arlee knocked them off track. Still, they stayed the course and rallied for a pair of wins on the tournament's final day, including a 51-43 victory over Fairview to claim third place.

“We were real disappointed in that first game (against Arlee) because we felt like we didn’t play our best game,” Scobey coach Jason Wolfe said. “All the credit goes to the guys. They stayed focused on what we wanted to do. We wanted to finish the season on a win and that’s what we were able to do thanks to them.”

Fairview (23-5) hit three 3-pointers in the early going to grab the lead, built the advantage as high as 10 at the 4:34 mark of the second quarter. But Scobey (24-1) pared the deficit to four before halftime and continued its run in the third, at one point outscoring the Warriors 19-4.

Aiden Fishell hit a deep 3 from the right wing as the buzzer sounded to end the third quarter and the Spartans led 30-24. Fishell, a 5-foot-9 sophomore, capped as strong tournament with 16 points.

“It feels really good. Last year I didn’t get many minutes – I was a really small freshman,” Fishell said. “Now I’m not a very big sophomore, but I always come out and play as hard as I can. It feels really good to bring home third place.”

Wolfe pointed to Scobey’s defensive adjustments as being the key. Between the second and third quarters, the Spartans limited Fairview to nine points.

The Warriors were led by Cody Asbeck, who finished with 17 points. Alex Schriver had 13 points but was hobbled in the second half after a hard collision under the basket.

Chinook (25-2) was led by Cord Schneider's 12 points and seven rebounds.

Scobey beat Melstone 47-42 in the day’s second loser-out tilt. The Spartans advanced on the strength of a 14-point effort from Jeremy Handy. Aidan Fishell added 10 points.