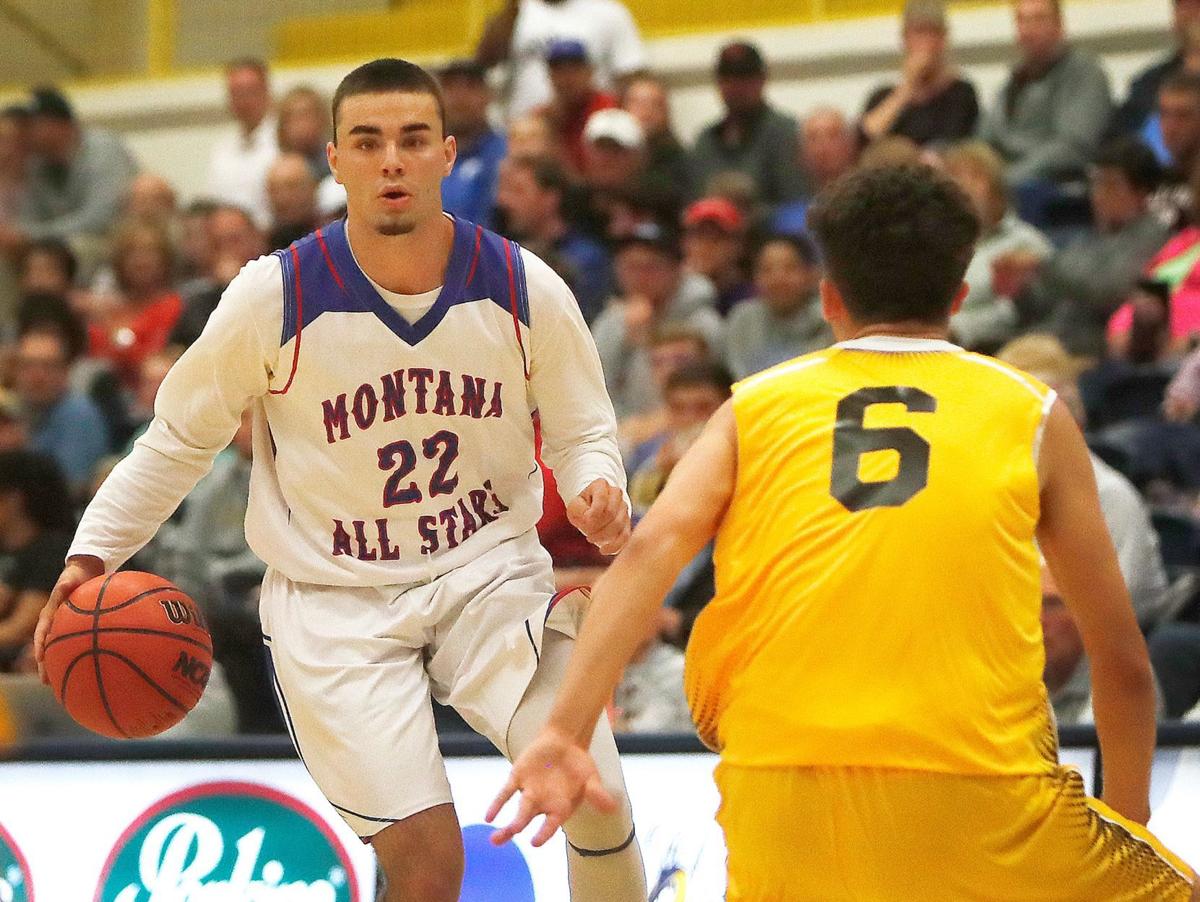 Sayer Patton of Choteau dribbles against Glenrock's Jaren Fritz on Friday during the Montana-Wyoming All-Star Series at MSU Billings. 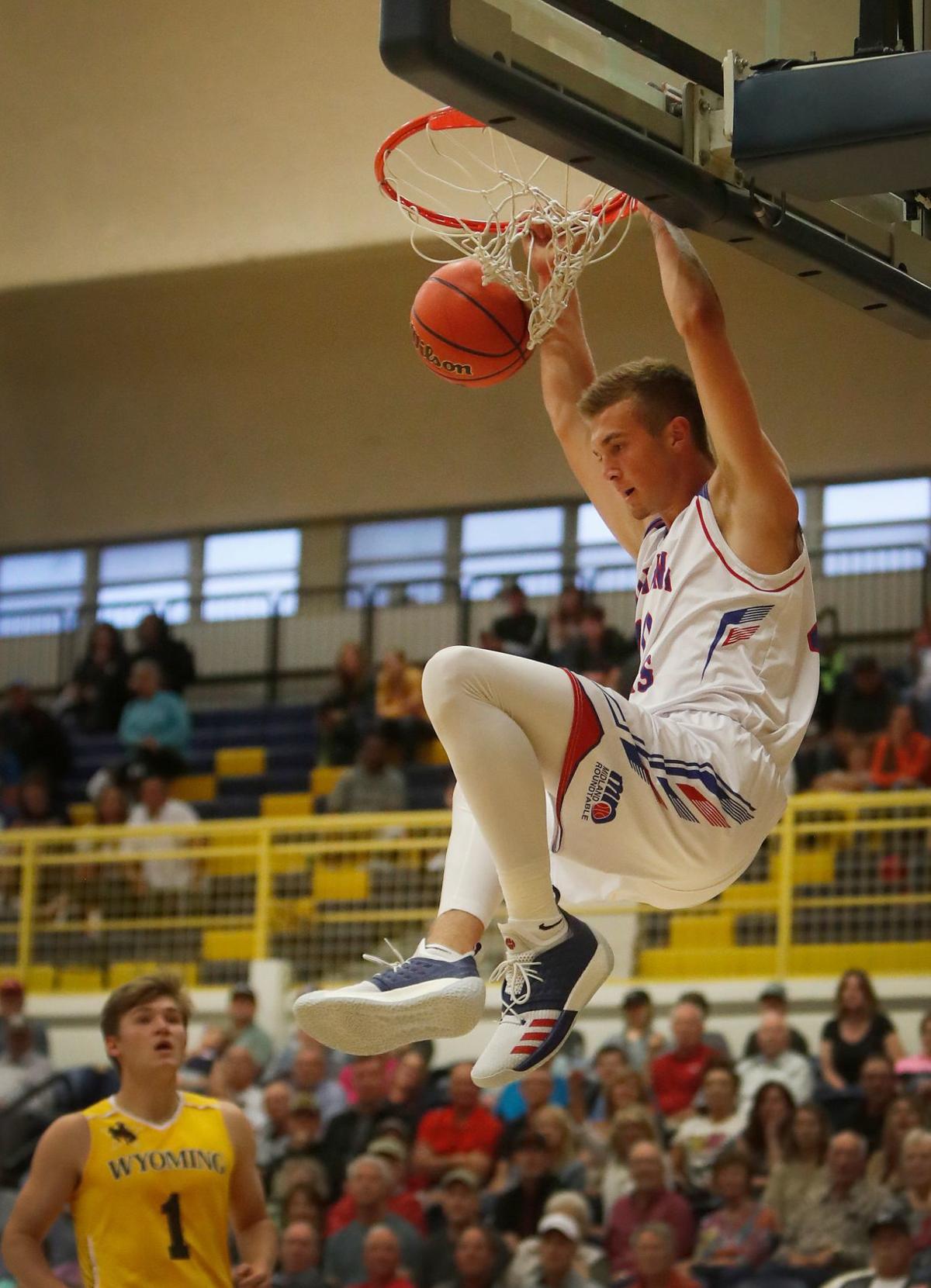 Manhattan Christian's Caleb Bellach dunks during the second quarter of the Montana-Wyoming All-Star Series on Friday at MSU Billings.

Sayer Patton of Choteau dribbles against Glenrock's Jaren Fritz on Friday during the Montana-Wyoming All-Star Series at MSU Billings.

Manhattan Christian's Caleb Bellach dunks during the second quarter of the Montana-Wyoming All-Star Series on Friday at MSU Billings.

BILLINGS — The Treasure State has historically dominated the annual Montana-Wyoming All-Star Basketball Series, so it’s logical that there were a more than a few looks of consternation on the court Friday night when its Cowboy State counterparts erased a double-digit deficit to take a two-point lead in the fourth quarter.

But the Montana team stood tall in the final moments and held on for a 103-100 victory to extend its winning streak in the series to 15 games and move its overall lead over Wyoming to 60-27.

The teams will meet again to cap the 2019 series on Saturday at the Bruce Hoffman Golden Dome in Sheridan, Wyoming. Tip-off is at 7:30 p.m.

Montana missed 13 free throws and suffered defensive lapses both on the perimeter and off the dribble. In the end, the Treasure Staters didn’t allow a basket over the course of nearly two minutes, and Billings Central’s Chrishon Dixon and Choteau’s Sayer Patton combined to make four free throws in the final seconds to ice the game.

“We didn’t make our free throws. That’s something to work on for tomorrow,” said Great Falls High’s Blake Thelen, who scored 17 points. “But ultimately we hit enough shots and gave ourselves a big enough lead that they couldn’t come all the way back. Credit to us.”

Thelen hit consecutive 3-pointers early in the fourth quarter, which helped Montana to an 85-72 advantage, its biggest lead of the game.

Nevertheless, a 3 by Gillette Thunder Basin’s Colton Larson, a three-point play from Casper Kelly Walsh’s Davion McAdam and a baseline jumper by Riverton’s Treyton Paxton tied the game 89-89 with 4:24 to go. A pair of free throws by Larson near the 3:00 mark put Wyoming up 93-91.

Larson scored 12 of his 18 points in the fourth quarter to spur the comeback.

The Wyoming All-Stars came into the game fully intent on breaking their losing streak to Montana.

“We talked a lot about state pride. Montana versus Wyoming, it’s a lot of state pride,” coach Cody Ball said. “We wanted to come up here and have a friendly competition, but we wanted to win.

“We knew that we lost 14 in a row. We talked about it Wednesday and Thursday and today before the game. I think you could see it. After the game our guys’ heads were down. They were upset.”

Wyoming hit eight 3-pointers in the first half and trailed 51-48 at intermission. That forced Montana coach Steve Keller to call for more defensive pressure in the backcourt, and it seemed to work as Wyoming made just three more 3s the rest of the night.

But Wyoming’s guards were still able to get to the rim, and to the foul line, making 17 of 22 attempts.

“We guarded well in stretches and got them down but they got right back in the game,” Keller said. “Give them credit. They’ve got a lot of guys who can shoot the 3. Then we got out and tried to cover the 3 and they got us off the bounce a little bit.

Billings West’s Jesse Owens hit one of the biggest shots for Montana, a 3-pointer late in the fourth quarter that gave his team a 94-93 lead, an advantage it never surrendered.

NOTES: Before the game, Grebe was named Mr. Basketball for the state of Montana for 2019. … The series was played at Alterowitz Gym on the campus of Montana State University Billings for the first time since 1994.

Montana boys hang on to defeat Wyoming, 103-100, at the game at MSU Billings on Friday.