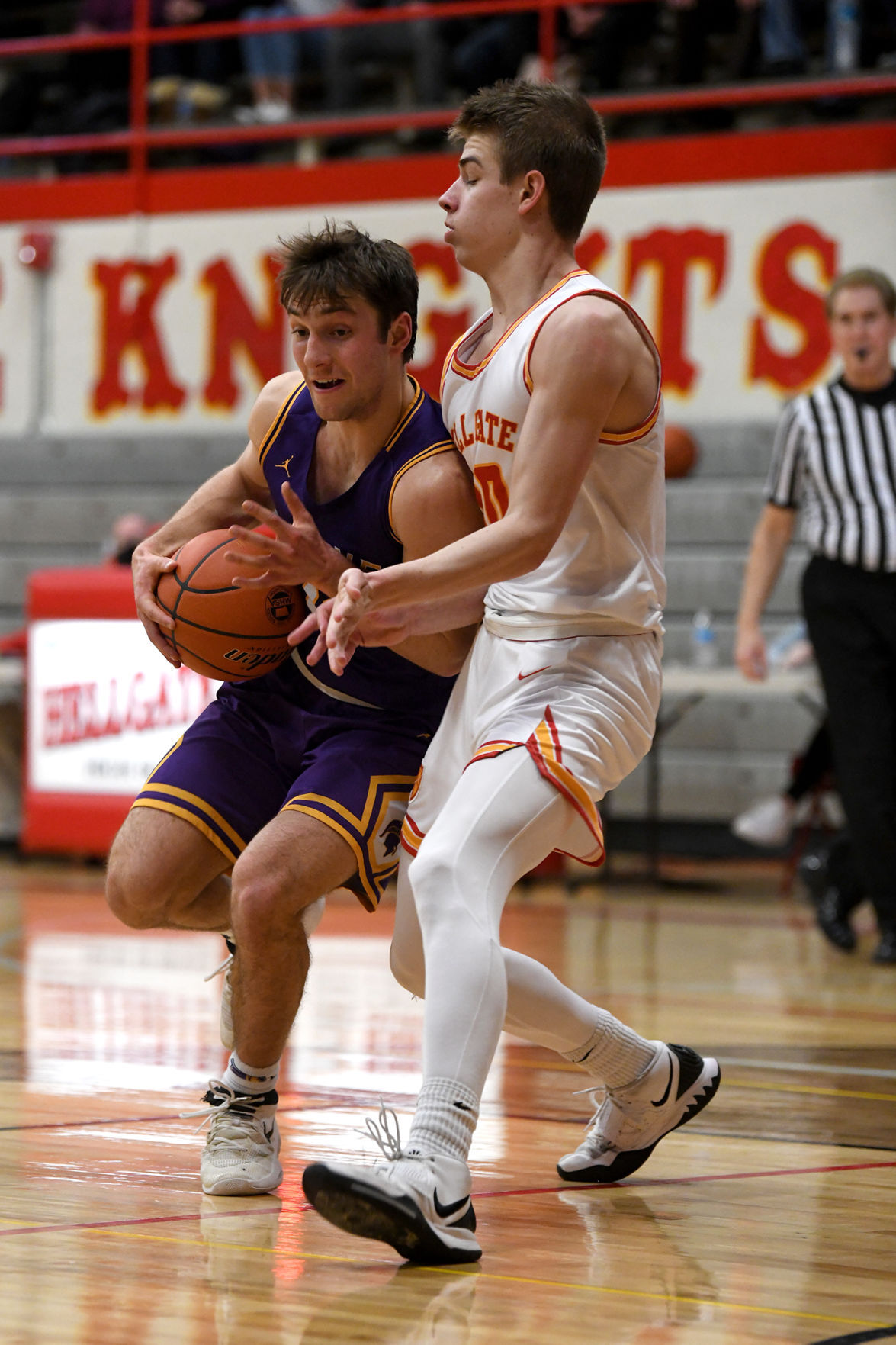 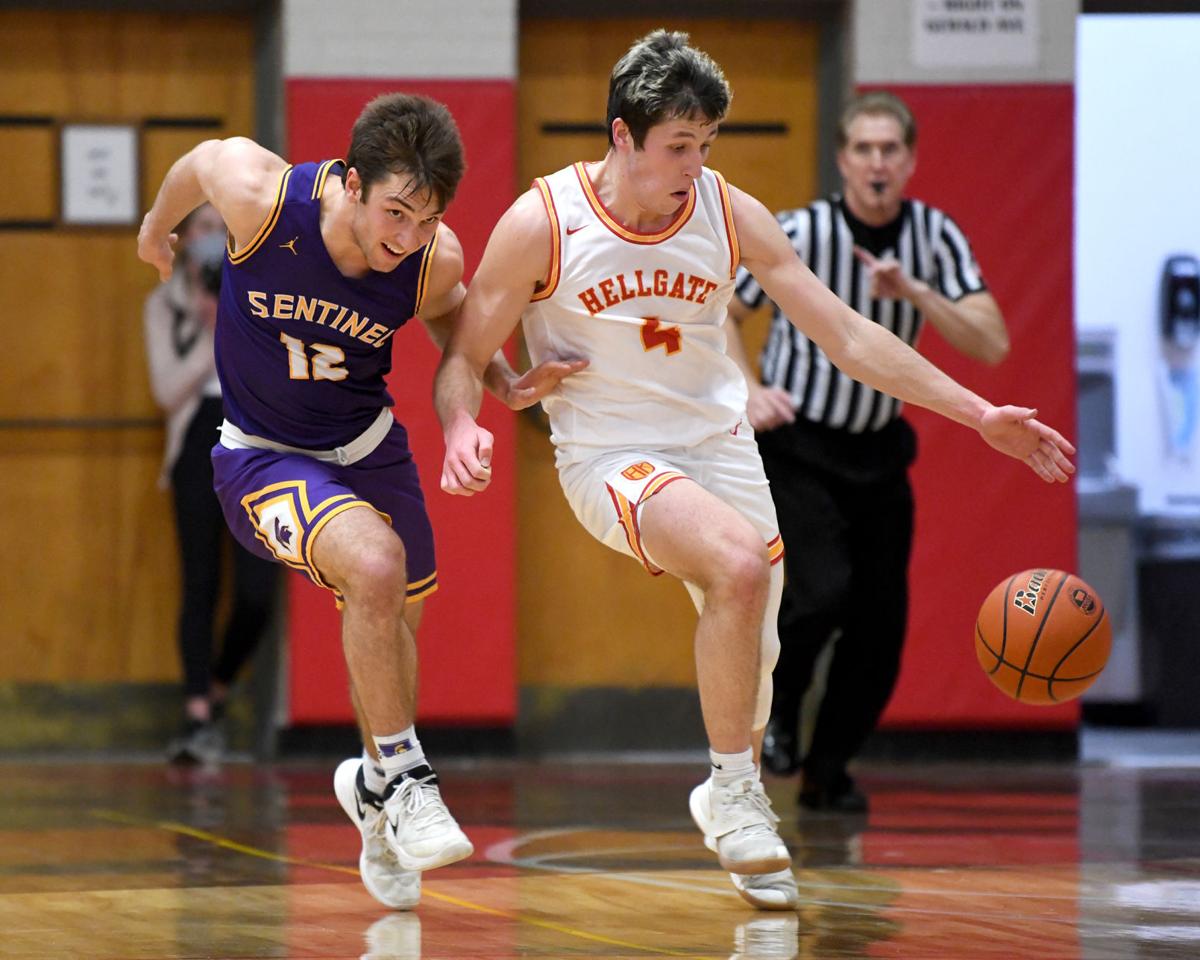 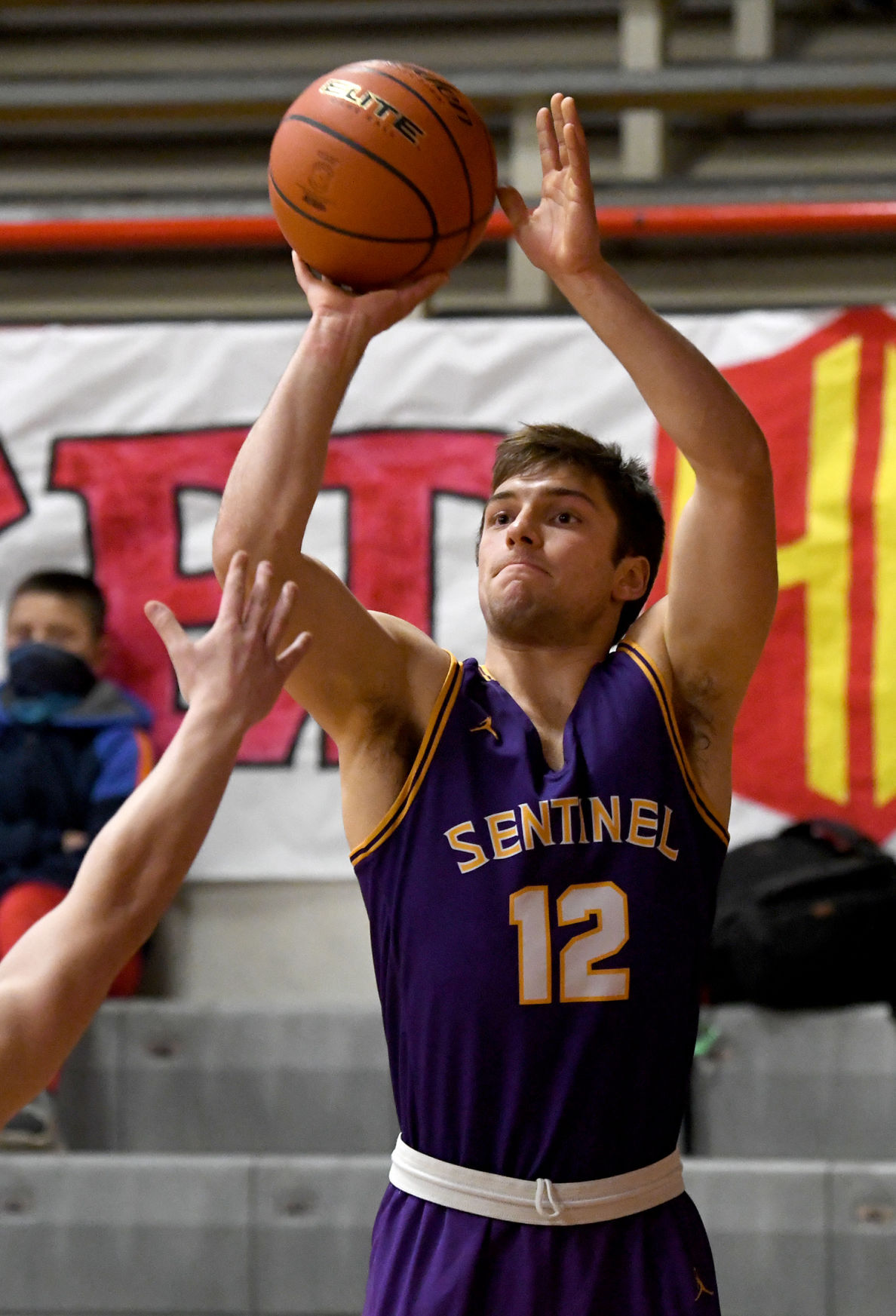 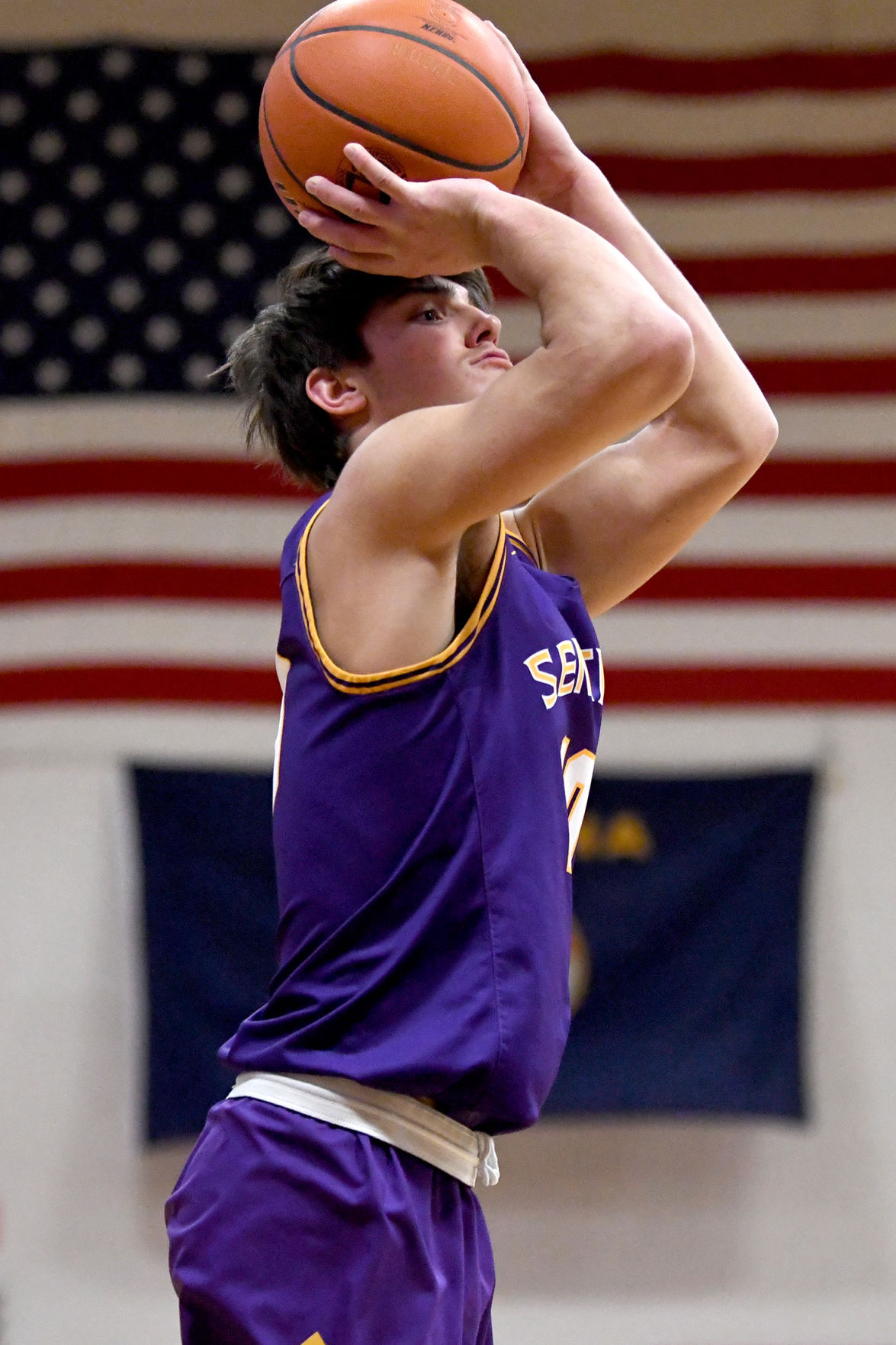 They exchanged pleasantries and memories about their rivalry games. Then Hays offered some high praise toward Syvrud as their brief interaction drew to a close.

“If I had you, we’d be 2-0. You keep up the good work,” Hays told Syvrud, whose Spartans had just swept the crosstown series several minutes earlier.

It was a heartfelt moment, and it came after Syvrud and the Spartans broke Hellgate’s heart in the Knights’ regular-season home finale. Sentinel had rallied in the fourth quarter to capture the city championship and Western AA title, both a first for the Spartans since 2018.

Syvrud and fellow starter TJ Rausch, who both will be heading to Montana to play football for the Griz, have been the unsung heroes for the top-ranked and undefeated Spartans. They showed that Tuesday as they were forced to step up in a big way and combined for 22 points, five assists, five rebounds and three steals in a 65-56 win.

“You know what those two kids are? They’re winners,” Sentinel coach Jason Maki said. “They have the best attitudes you could ask for. That really helps our chemistry and our team morale because those guys simply want us to score more points than the other team, and they’re willing to do whatever it takes. That’s all those two want to do, and I just appreciate them so much.”

Rausch and Syvrud oftentimes fly under the radar because they don’t light up the scoreboard on a regular basis. They’re instead keyed in on doing all the dirty work that only basketball junkies can regularly spot and appreciate.

It’s all with the mindset of getting their team that coveted win. And Sentinel has 12 of those victories in 12 games.

“We’re not undefeated without those two guys,” Maki said. “They’re super important. Those two have such great energy. They make everybody else play hard because they’re playing so hard all the time.”

Rausch and Syvrud are both in their second season as starters and their third season on varsity. But neither of them was guaranteed to be starting this year, especially with a new head coach.

They each had to prove they deserved to be a starter, and they’ve done just that on a loaded team with 10 seniors.

“I knew we had to all put our heads down and work and the chips will fall where they fall,” Syvrud said. “I’m happy to be in the spot I am with this team. I love this team and the way we work.”

That hard-nosed approach and willingness to embrace the grind better be there if they’re going to play for a coach like Bobby Hauck in college. They’re enjoying putting in that work on the basketball court, even though it’s not what their focus will be for the next five years in college.

Rausch, a 6-foot-3 guard, grew up playing basketball, was on an AAU team and was open to the possibility of playing college hoops. He fell in love with football and got an offer from his hometown university to play wide receiver.

“I think I just play that position better, and I just love to hit people,” Rausch said of football. “Here, I just do whatever my team needs me to do on a certain night. It changes between defense, getting boards or a couple baskets, but just whatever the team needs.”

Unlike Rausch, Syvrud knew for a long time he wanted to play college football, although he grew up playing plenty of basketball, too. He went to summer basketball camps coached by Hays while he was growing up but decided football was his future and went to Sentinel.

“I knew football was for me,” said Syvrud, a 6-foot guard who’s recruited to play linebacker at UM. “But I’ve just worked my hardest for this team because we’ve got a lot of good basketball players, and I’m just doing my part to get the wins.”

Maki knew over the summer he had a solid base to build his team around when he started working with Montana State basketball commit Alex Germer, Tony Frohlich-Fair and Hayden Kolb, the team’s top three scorers. He was more optimistic when he saw Rausch, a wide receiver, and Syvrud, a running back, on the football field during Sentinel’s run to being state champions.

“Those guys were flying all over the football field and doing great things, so you knew the athleticism was there,” Maki said. “I just knew you combine the guys I was getting to work with, with those athletes that this team had a chance to be special.”

Rausch and Syvrud’s athleticism is what has stood out to Hays over the years.

“Soren and TJ are tremendous athletes,” the 11th-year Hellgate coach said. “I think they’re tremendous teammates. They defend their tails off. They make it really difficult. Not only do they guard their guy, but they’re helping support their teammates and they’re all over the floor.

“They’re both pretty good around the basket. I think Rausch is a wizard along the baseline, and Syvrud can drive and finish at the rim.”

Once they were done with the football season, Rausch and Syvrud had to prove themselves to Maki, who challenged the team to be “tough and together,” the motto he created when he took over the program he used to play for this offseason. He’s seen those two words come to life in Rausch and Syvrud.

“They embraced that,” Maki said. “They’re just workers. They have no problem with that. That’s the way they want it. Those guys want that hard work. You’ve got to be tough, and they epitomize that ‘tough and together.’”

The basketball team is now chasing its first state title since 1986, and this is the season Sentinel has been building toward for years.

Many of the players have been teammates going to back to their childhood. Others like Germer and Frohlich-Fair moved to Missoula in sixth grade and sophomore year, respectively.

“We’ve been playing together since third grade on travel ball teams, so to be at this point together our senior year and be Western AA champs is pretty exciting because we know all the hard work that’s gone into it,” Syvrud said. “I’m just happy with the way this season’s gone, and hopefully we’ll finish it out right.”

“We’re a really tight team,” Rausch added. “We have a lot of fun together. I’m loving that we’re kicking butt right now.”

Challenges await at the state tournament. The Spartans will have their first games against Eastern AA teams, which have the second-, third- and fourth-best records in the state.

Sentinel still has two more regular-season road games Thursday and Friday and a state play-in game next week — more chances to put in work as they try to create good memories.

“The time with my teammates is something I’ll never forget,” Syvrud said. “It’s the best part of basketball. Also, we’re winning. I want to continue on that path with this undefeated season.”

“I’m just going to cherish these last games we get together as teammates and hopefully go get a state title,” Rausch added. “It’s been awesome this year so far.”

Striving to be 'Tough and Together,' Missoula Sentinel tops Helena High for 1st win as No. 1-ranked team in state

Missoula Sentinel rolls past Helena High to improve to 3-0 and win its first game of the season while being ranked as the No. 1 team in the state.