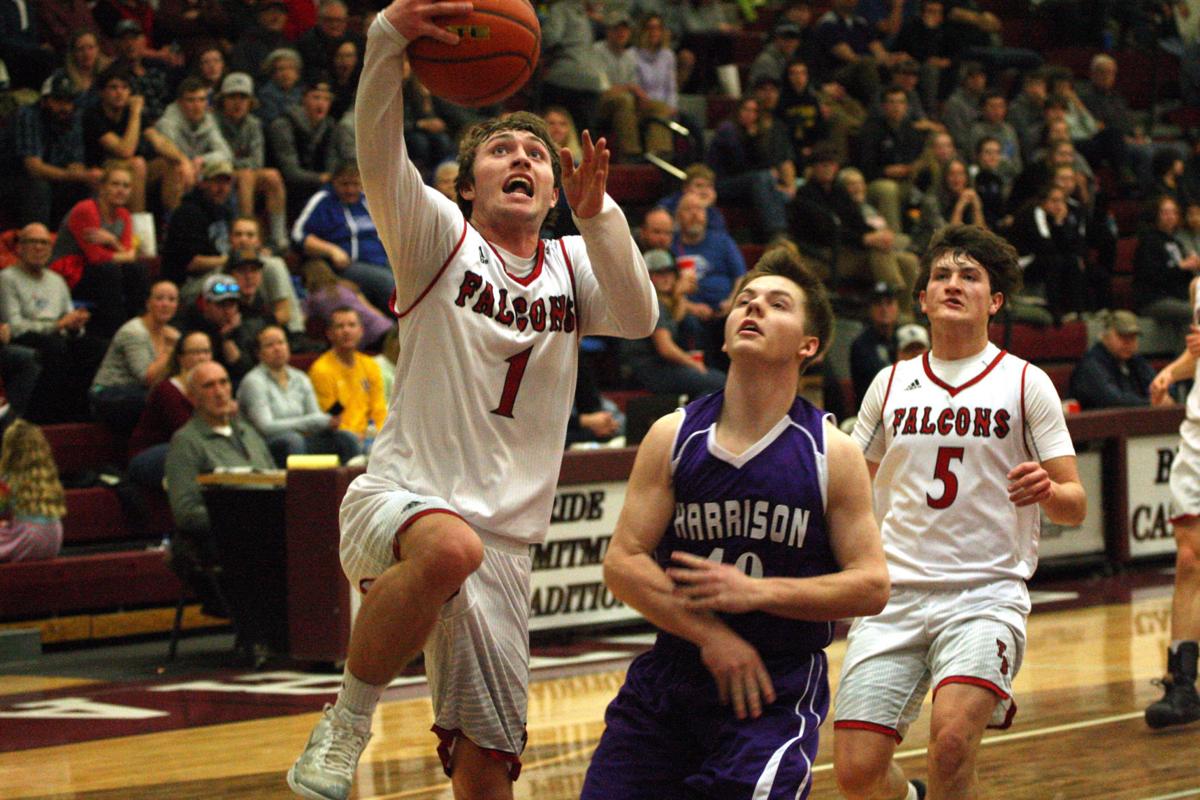 Twin Bridges' Bryce Nye goes for a layup during the Falcons' win over Harrison during the District 12C championship game at Butte's Maroon Activity Center. 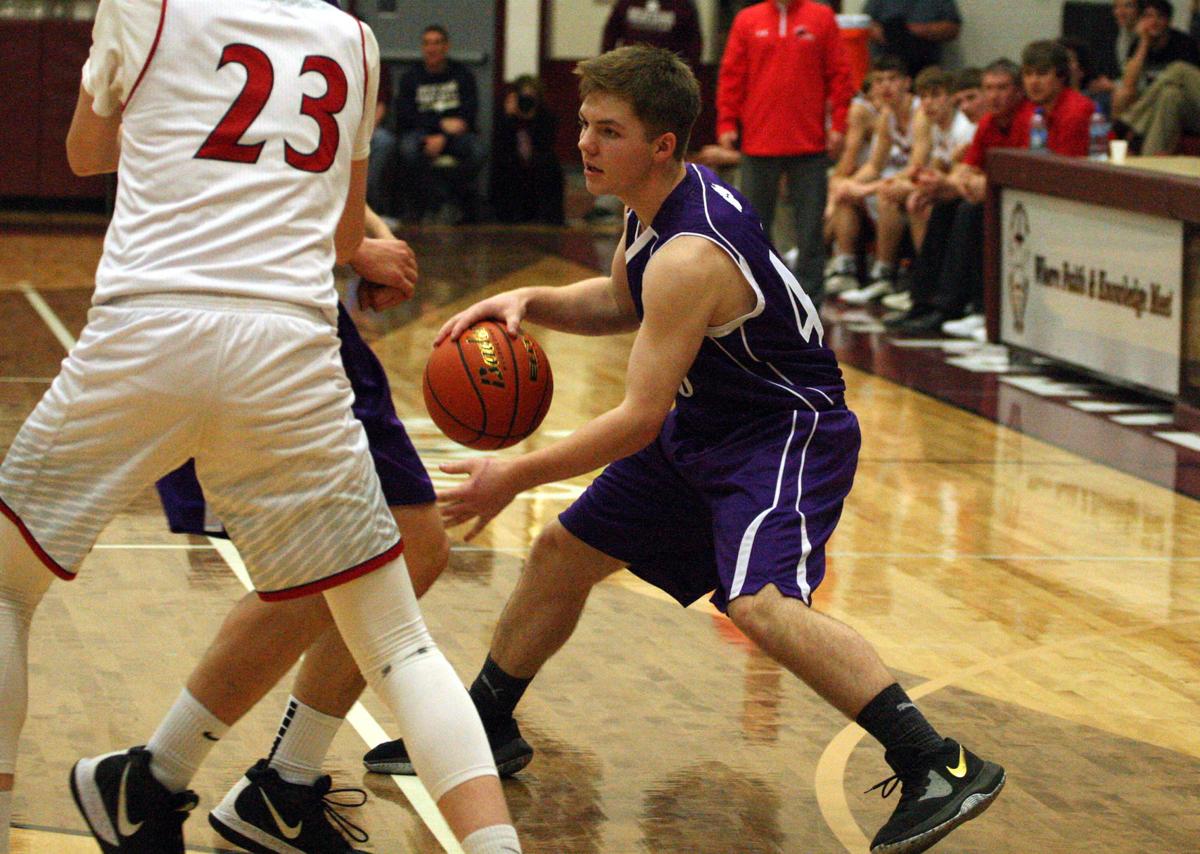 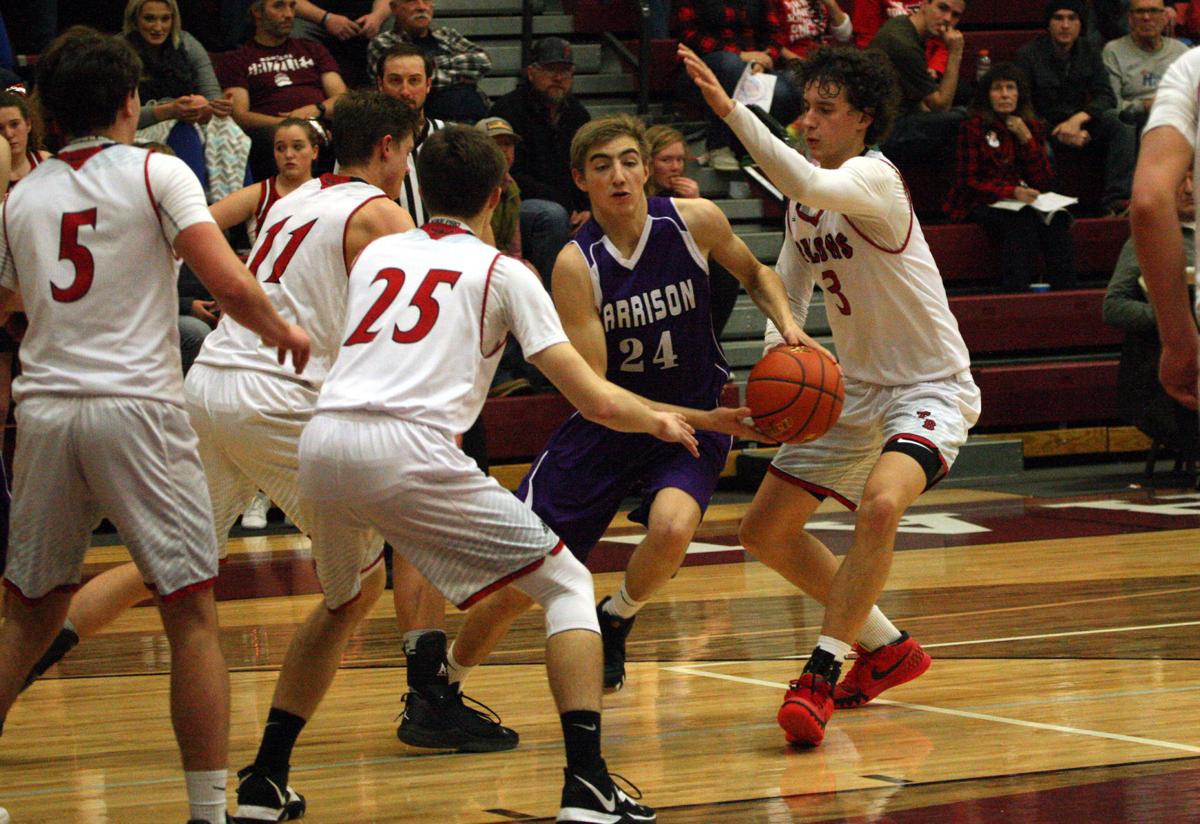 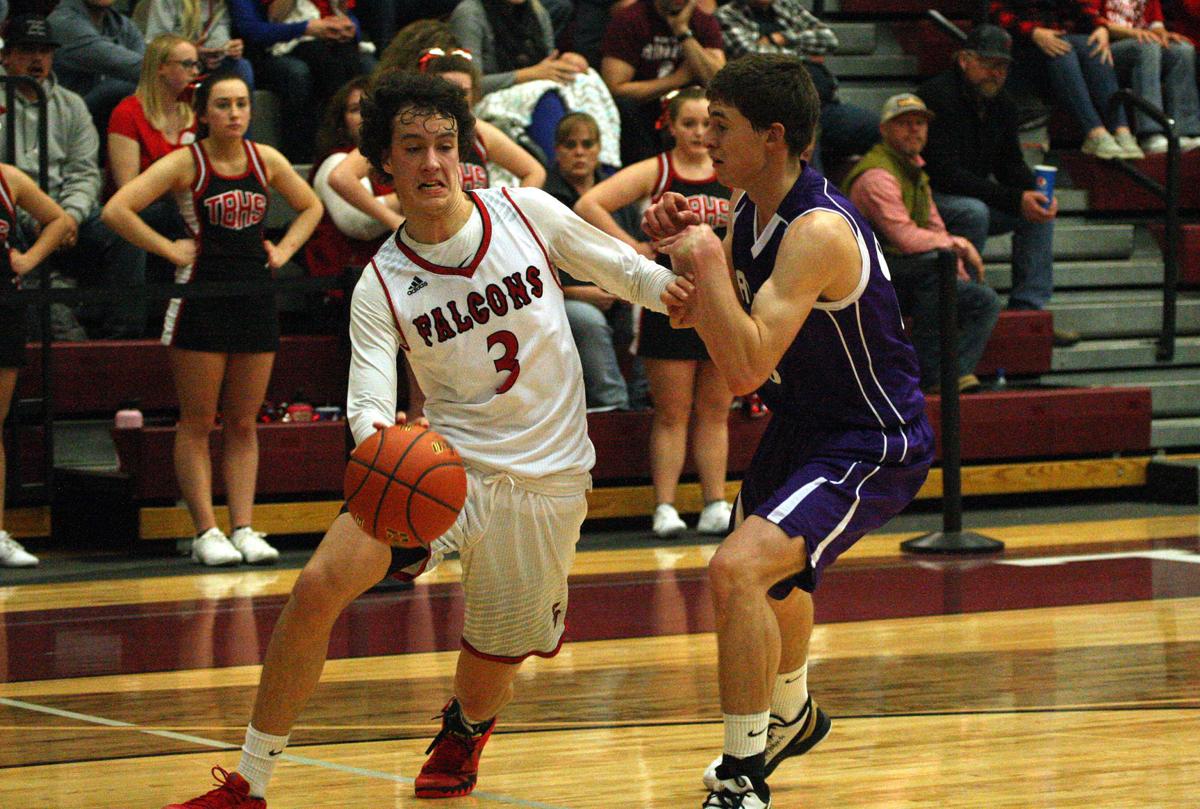 Twin Bridges' Charlie Kruer dribbles down the line during the Falcons' win over Harrison during the District 12C championship game at Butte's Maroon Activity Center. 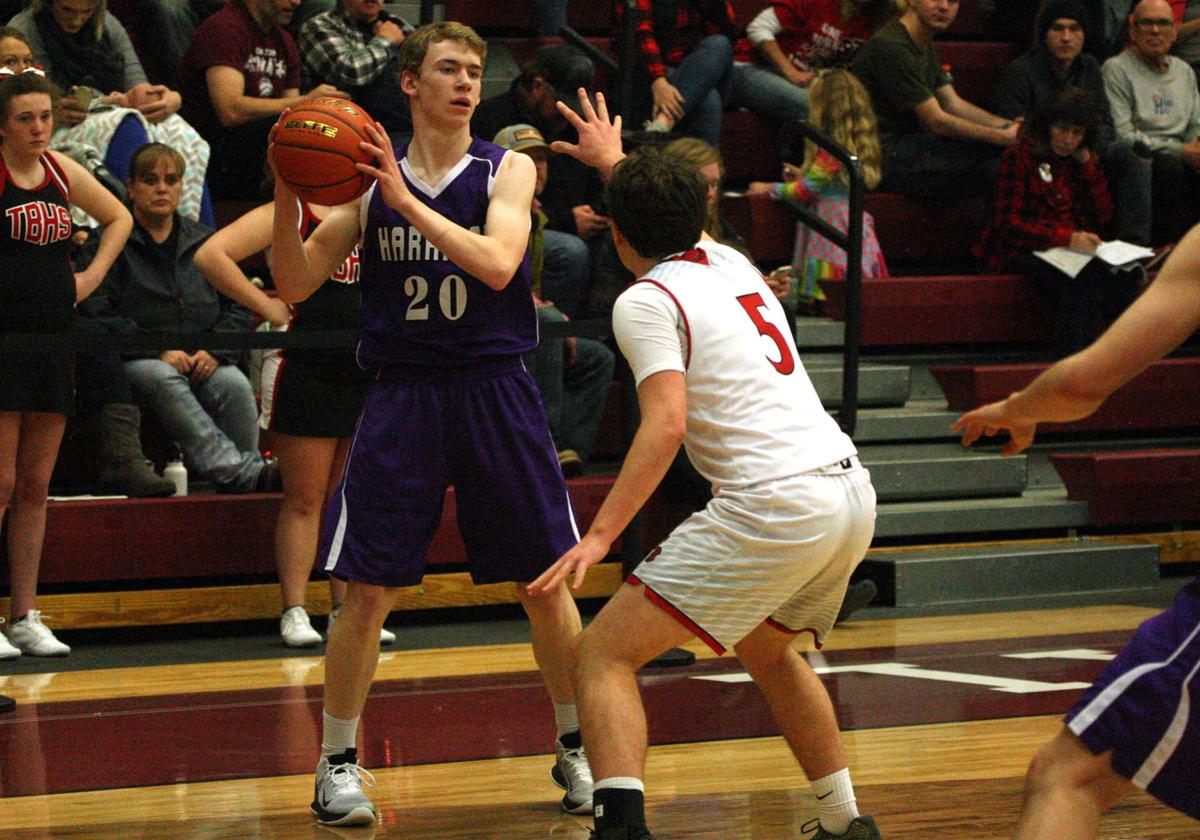 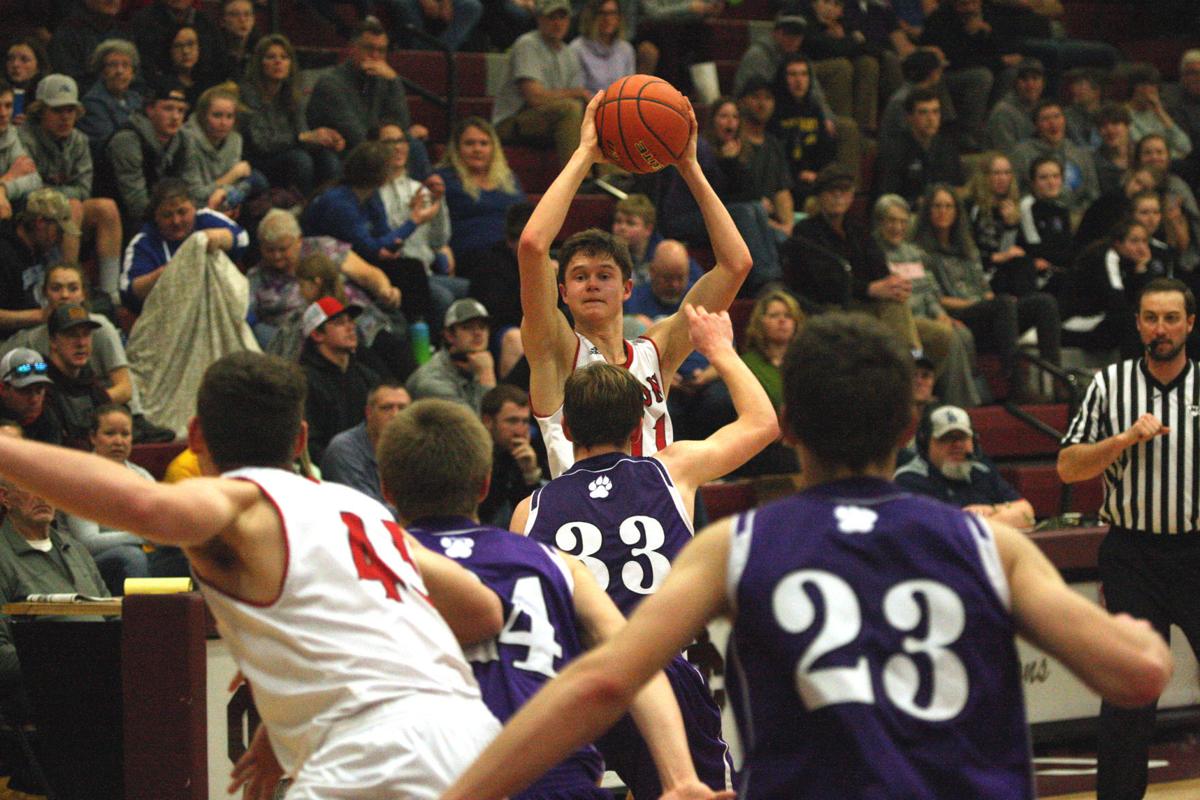 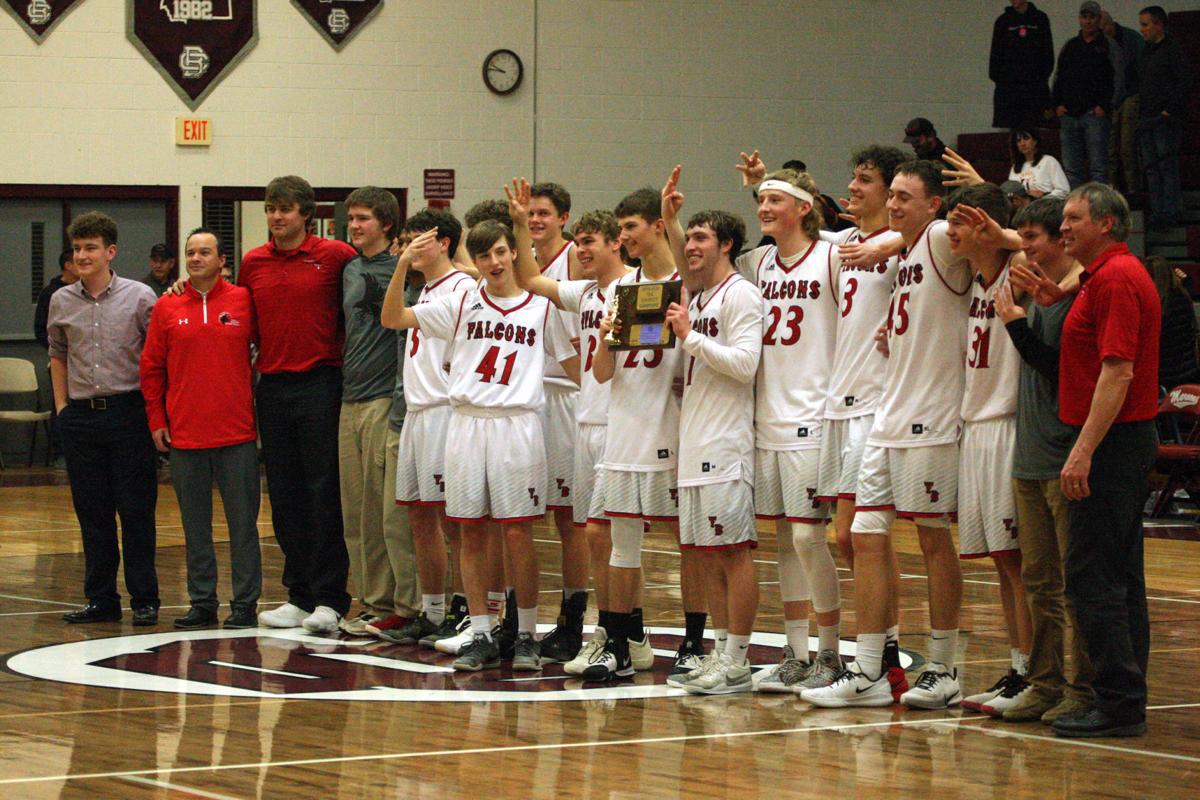 Twin Bridges' Bryce Nye goes for a layup during the Falcons' win over Harrison during the District 12C championship game at Butte's Maroon Activity Center.

Twin Bridges' Charlie Kruer dribbles down the line during the Falcons' win over Harrison during the District 12C championship game at Butte's Maroon Activity Center.

Four was the magic number for the Falcons.

Twin Bridges defeated Harrison 54-38 to obtain their fourth-straight district championship, improving to 21-0 overall after an undefeated run through District 12C.

Falcons head coach Josh Keller talked about his and the Twin Bridges team’s desire to win a fourth district title for its seniors.

“It feels really special for the kids,” Keller said. “This group of seniors, a lot of them have been playing all four years and this is their fourth district championship. The attack of the day was to go for that four-peat, so it feels really good for those kids.”

The Falcons and Wildcats traded early baskets, as Harrison opened up the scoring to a loud roar from the crowd at the Maroon Activity Center.

Twin Bridges responded quickly, jumping out to a 12-4 lead. Sadly, Falcons standout senior Nate Konen landed awkwardly on a rebound attempt, injuring his knee and being taken out of the building for medical assistance.

Keller commented on his reaction to the senior’s injury, complimenting his team for being mentally tough.

“Konen’s a warrior and we miss him so much,” Keller said. “Give it all to the kids… To be able to do what they did, my arms were all tensed up and I was in knots. For those guys to see a teammate go down who’s so special to us and respond like that they did was just incredible.”

Twin Bridges senior Jake Hughes talked about what was said after his teammate’s injury, and how they planned to respond.

“We feel like we’re playing with our brothers here,” Hughes said. “Tragic to see Nate go down, my prayers are up for him… We said, ‘From here on out, we do it for Nate. This is for him now.’”

The Falcons could have had a lapse in play, but Keller’s team elevated their play, outscoring the Wildcats 9-2 for a 21-6 advantage after the first quarter, and seeing Hughes drain three of his five first-half treys.

Harrison wasn’t deterred, as the Wildcats answered with a 7-0 run in the opening minutes of the second quarter to bring the Twin Bridges lead back to single-digits.

Harrison’s run was quickly negated by Twin Bridges, who outscored the Wildcats 17-3 after their initial second-quarter run thanks to the Falcons’ seniors Bryce Nye and Charlie Kruer.

The Falcons were able to match pace with Harrison’s offense in the third quarter as the Wildcats began to pick up the pace in hopes for a comeback.

A trey from junior Jackson Nye to start the fourth quarter riled the Wildcat crowd and bench, but Twin Bridges held Harrison to just five points after Nye’s initial basket.

The Falcons were led by Hughes’ 22 points, with Bryce Nye and Kruer adding 11 and eight respectively. Juniors Tate Smith and Matthew Kaiser finished with four points each.

While the loss is a damper for Harrison’s tournament, the Wildcats now advance to the divisional tournament, which Murphy says is the most important thing.

“I’m not sure if Harrison has taken first place at the district tournament ever,” Murphy said. “We wanted to set some history and take the trophy home, and that’s not happening unfortunately, but we do advance. We’re still happy.”