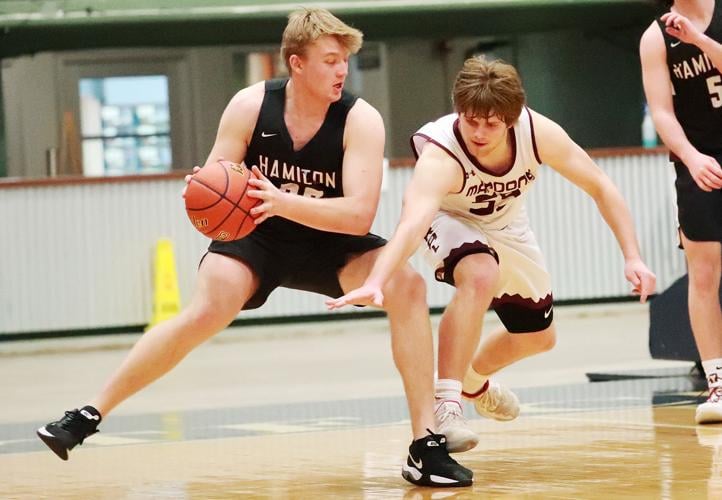 Hamilton's Tyler Burrows snatches the ball away from Butte Central's Bryan Holland on Saturday afternoon during the Western A Divisional Basketball Tournament in Butte. 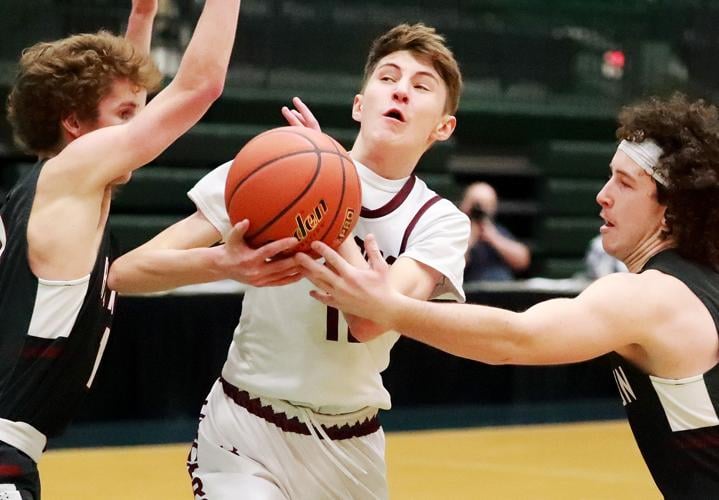 Butte Central's Dougie Peoples is guarded by players from Hamilton High School as he takes the ball to the hoop Saturday afternoon during the divisional tournament at the Butte Civic Center.

Hamilton's Tyler Burrows snatches the ball away from Butte Central's Bryan Holland on Saturday afternoon during the Western A Divisional Basketball Tournament in Butte.

Butte Central's Dougie Peoples is guarded by players from Hamilton High School as he takes the ball to the hoop Saturday afternoon during the divisional tournament at the Butte Civic Center.

BUTTE — After winning their games on Saturday morning, Ronan and Butte Central played in the early evening to decide third place in the Western A divisional tournament. The Chiefs came away with a 54-49 win.

Both teams already secured spots in the state tournament, so the third place game, or consolation final was played for seeding purposes. Regardless of the future implications of the game, both teams played with high intensity on Saturday night.

“Many of these guys lost a friend this year and we dedicated this game to him, we’d say his name after huddles and breaks,” said Ronan coach D.J. Fish. “When we play for something and have that drive, we have plenty of potential and we’re a dangerous team.”

While Fish said motivation and drive were key in his team’s victory, Butte Central coach Brodie Kelly said the loss came due to a lack of those things.

The Maroons held a narrow, two-point lead at the end of the first quarter (11-9). But in the second, Ronan found their stroke from range and tied the game at 23 come halftime.

After a shaky past two games, Butte Central’s Egan Lester scored four points and grabbed six rebounds in the first half. With outside shots not falling, Dougie Peoples scored ten first half points primarily off of dribble drives and free throws.

“I’m thrilled for Egan and the whole year he’s had, he took on a new role guarding the other team’s best player,” Kelly said. “And now he’s shooting the ball with so much confidence. When he does that, we are a potent offensive team.”

The fun did not stop in the first half for Lester. On the first two offensive possessions of the third quarter, Egan Lester hit 3-pointers which noticeably ignited his team. The downside for the Maroons came on the defensive end, where they were once again significantly out-sized.

Ronan pulled away around the five minute mark of the third quarter. Defensive improvement and inside scoring helped the Chiefs obtain a 41-32 lead going into the fourth quarter.

“We didn’t play with the right level of intensity. When you have consolation games like this and don’t have that fire in your belly, the win goes to the talent,” Kelly said. “And the team we played today is very talented.”

With under 50 seconds remaining the Maroons turned to fouling, but had trouble scoring when they had the ball. Unfortunately for the Maroons, they were unable to complete the comeback.

Elijah Tonasket led the Chiefs with 18 points while Girma Detwiler had 12 points, seven rebounds and two blocks. Dougie Peoples had a game-high 19 points for the Maroons, while Egan Lester had a standout game finishing with 15.

“I think playing with more of an attacking mentality will be our focus,” Kelly said. “In this tournament, when we struggled was when we were passive. We’re playing really good teams next week which means we’ll have to be fearless.”

After losing to Dillon on Friday, the Butte Central Maroons knew their game against Hamilton on Saturday would decide their fate. The Maroons came away with a 49-38 victory, which secured them a spot in the state tournament.

Hamilton's season has ended, while the Maroons are set to face Ronan in the consolation final tonight at 5 p.m., just four hours after their first game of the day had finished.

"I'm not worried about the short rest time," said Butte Central coach Brodie Kelly. "Sure we want to win the consolation game and we want to win third place, but we won the game that mattered to us. This one got us to the state tournament."

Austin Drake found his rhythm quickly on Saturday, finding open shots and hitting them in the first quarter. The Broncs held a 15-8 lead at the end of the first quarter, but the Maroons continued to fight.

While the game moved quickly, both teams found their offenses running half court sets rather than utilizing fast-break opportunities. This often resulted in lengthy possessions, as both teams played tight defense to begin the game.

The Maroons shrunk the Broncs’ lead in the second quarter through hustle plays and patience. While outside shots were not falling, Kyle Holter and Drew Badovinac kept possessions alive grabbing six first-half rebounds combined.

"Games like this, you can't run a set because everyone knows your stuff, guys just have to step up," Kelly said. "Thank God for Kyle Holter and what he was able to do today. The other player I have to mention is Drew Badovinac. He's had an unbelievable tournament."

The Broncs held an 18-15 lead at halftime, which the Maroons erased seven minutes into the third quarter. But just as the Maroons hit a three to tie the game, the Broncs responded with a three-pointer of their own.

But things took a turn at the four-minute mark for the Maroons. Thanks to an outstanding effort on the defensive end, Kyle Holter made a stop, got a rebound and sprinted down the floor where he drained a three-pointer.

This gave the Maroons a 25-24 lead, but Holter was not finished yet. The very next possession, the Maroons came up with a steal that turned into a converted and-one for Holter. The Maroons led 31-26 after three quarters.

"Drew Badovinac stepped up on both ends of the floor, we had to put him on Drake who had ten points in the first quarter. I think he might have made two shots after that," Kelly said.

Once up by 11 in the fourth quarter, the Maroons began to struggle from the free throw line and held just a six point lead at the two minute mark. Despite a strong effort on the defensive end, Hamilton was unable to complete the comeback.