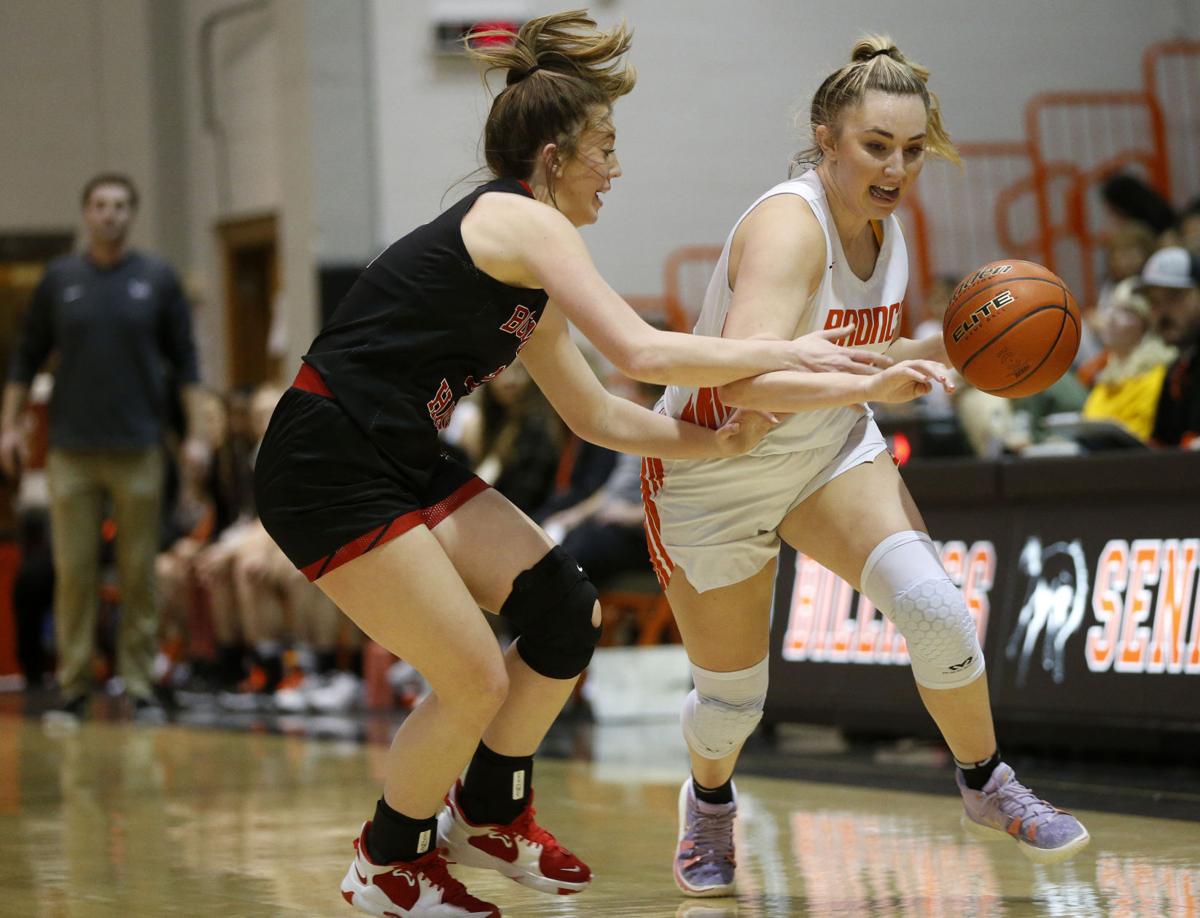 Billings Senior’s Allie Cummings dribbles on a Bozeman defender on Thursday at the Senior High gym. 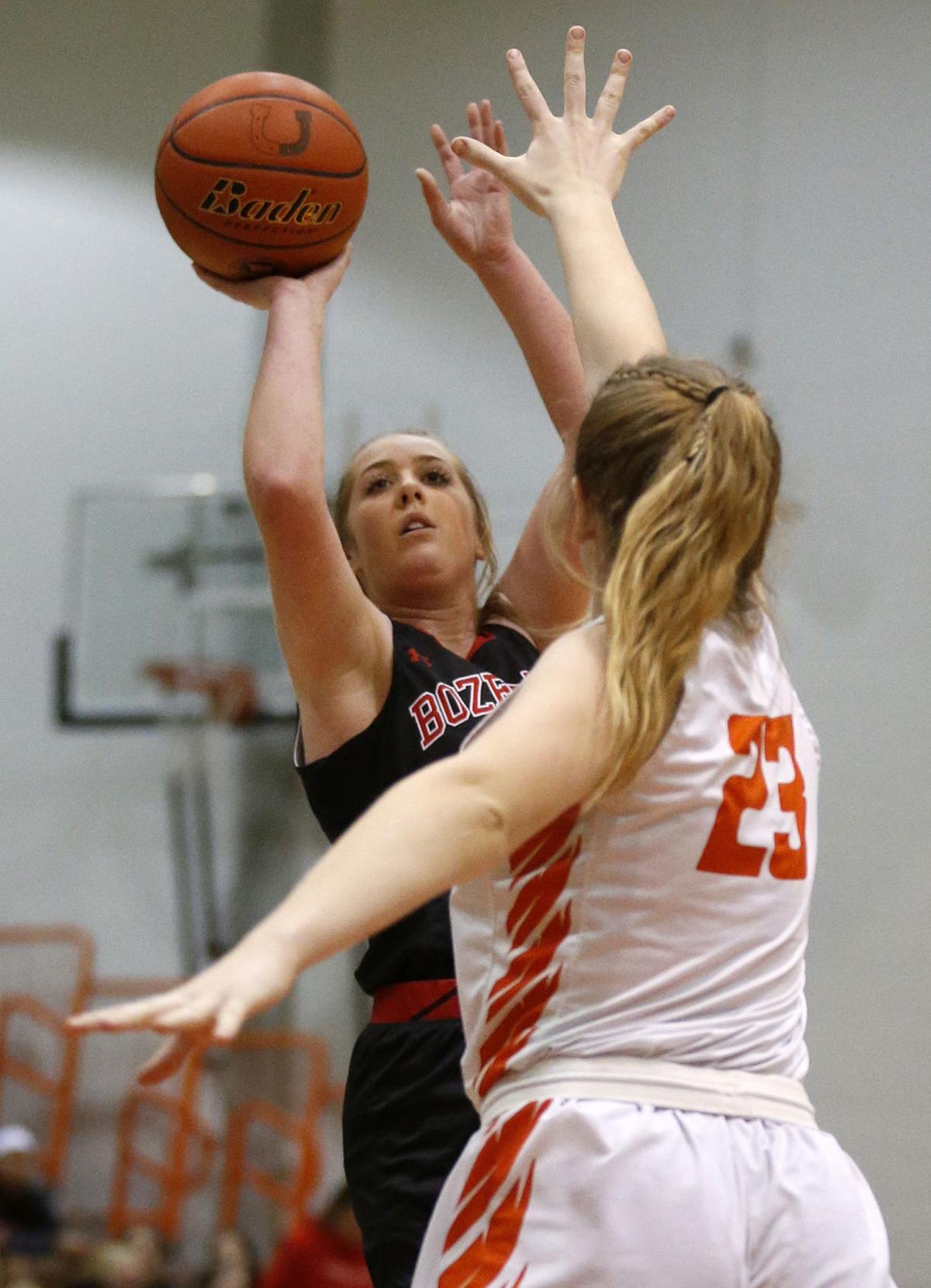 Bozeman’s Tailyn Black puts up a jumper against Billings Senior on Thursday at the Senior High gym.

Billings Senior’s Allie Cummings dribbles on a Bozeman defender on Thursday at the Senior High gym.

Bozeman’s Tailyn Black puts up a jumper against Billings Senior on Thursday at the Senior High gym.

Editor's note: Games will be reported as we receive them.

• Bigfork 87, Troy 16: Bigfork led by 23 points after the first quarter and 55-12 at halftime. Five players scored in double figures for the Vikings, led by Isak Epperly's 15 points. Cole Knopik added 13 points, Colin Wade scored 11 and Eli Thorness chipped in 10 for Bigfork, which gave up just six combined points between the second, third and fourth quarters.

• Terry 53, Custer-Hysham 32: A big second quarter helped Terry race past Custer-Hysham, as the Terriers outscored the Rebels 17-6 in the second stanza. Rodrigo Takano finished with 24 points for Terry, while teammate Victor Delgado added 12.

• Bridger 61, Joliet 52: The Scouts outscored Joliet 25-14 in the fourth quarter to pick up a nine-point victory. Baylor Pospisil led Bridger with 20 points, and Chance Goltz chipped in 15. Seth Bailey's 15 points led the way for the J-Hawks. Hayden Ward added 14 and Brice Williams had 10.

• Billings Skyview 68, Great Falls CMR 38: Cami Harris hit three 3-pointers on her way to a team-high 15 points in the Falcons’ victory. Brooke Berry added 12 points for Skyview and MG Spotted Bear finished with 11. Alex Madsen had 10 for the Rustlers.

• Billings Senior 57, Bozeman 47: Sisters Lauren and Allie Cummings combined for 42 points in the Broncs’ win over the Hawks. Lauren finished with 23, including 11 in the first quarter, and Allie pumped in 19, 11 in the third quarter, to help Senior pull away from a four-point halftime lead. Emily Williams led Bozeman with 11 points and Allie Megargel added 10.

• Browning 53, Cut Bank 41: A big third quarter and 16 points from Mecca Bullchild spurred Browning to victory. It was a one-point game at halftime – Browning led 20-19 – but the Indians outscored the Wolves 16-8 in the third quarter. Cera Guardipee, with 10 points, was also in double digits for Browning. Aliyah Cruz led Cut Bank with 10 points.

• Lame Deer 73, St. Labre 11: Lame Deer held St. Labre scoreless in both the first and third quarters, and led 34-0 after the opening eight minutes. The Morning Stars were led by Paris McLean, who had 19 points. Chelsea Spang added 15 and Jenna Sanders had 14. Shelrae Limpy scored five points for St. Labre.

• Saco-Whitewater-Hinsdale 45, Glasgow 23: The Mavericks bolted to an 11-point first quarter lead and never looked back. Jaycee Erickson led a trio of S-W-H players into double figures with 14 points. Teagan Erickson and Paige Wasson both had 11. Tyann Graham led Glasgow with seven points.

• Absarokee 57, Fromberg 22: The Huskies’ Tandy Planichek scored 26 points, and Ireland Robbins and Julianne Feddes scored 11 points each to help Absarokee run away in the second half. Jaycie Lowery scored eight points to lead Fromberg. Absarokee led 24-15 at the break, but used a 33-7 second half to win going away.

• Custer-Hysham 34, Terry 32: Keira Lackner had 11 points to help the Rebels rally from a 22-13 halftime deficit. Custer-Hysham outscored Terry 16-6 in the third quarter to take a one-point lead and held on for the win. Kierra Chaska also had 11 points for the Terriers.