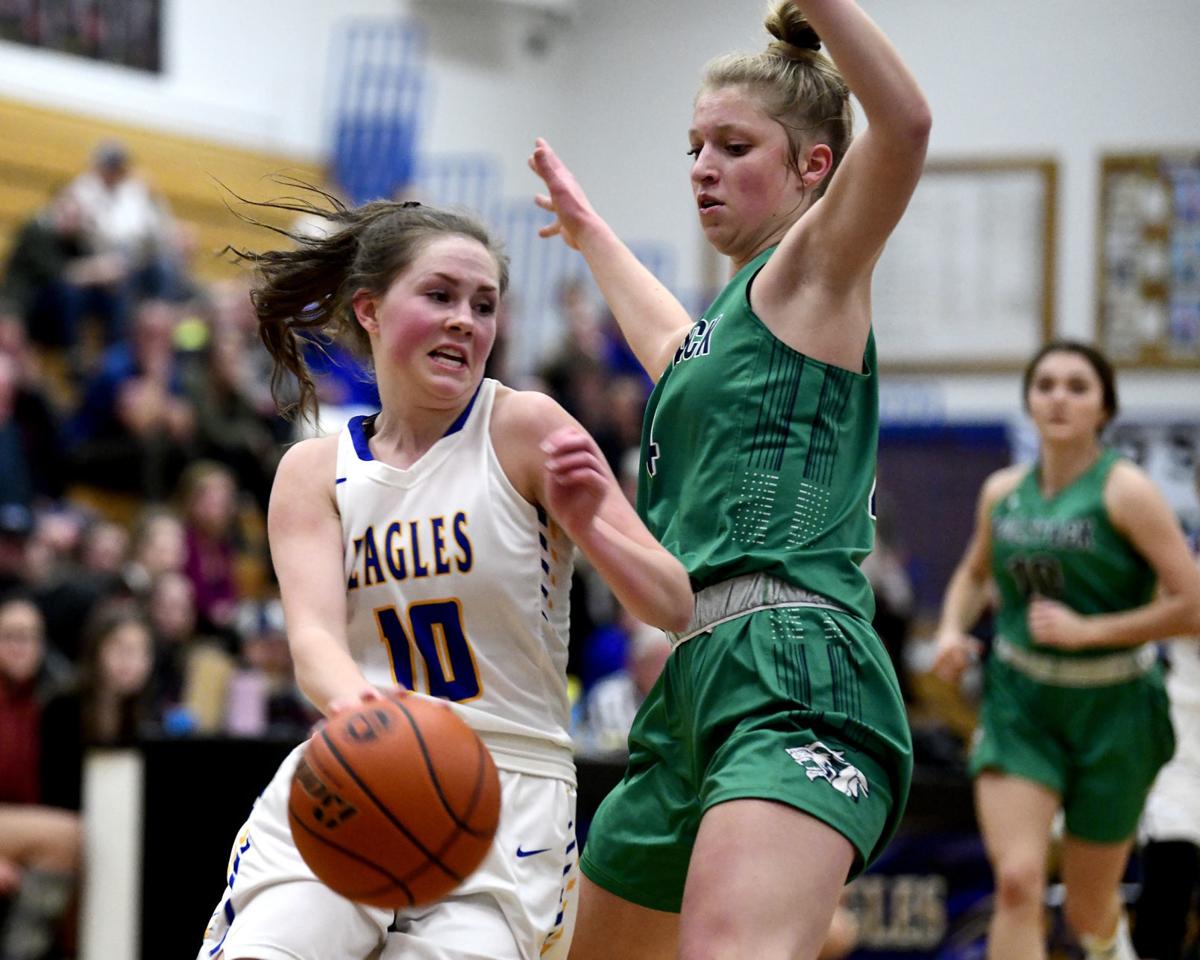 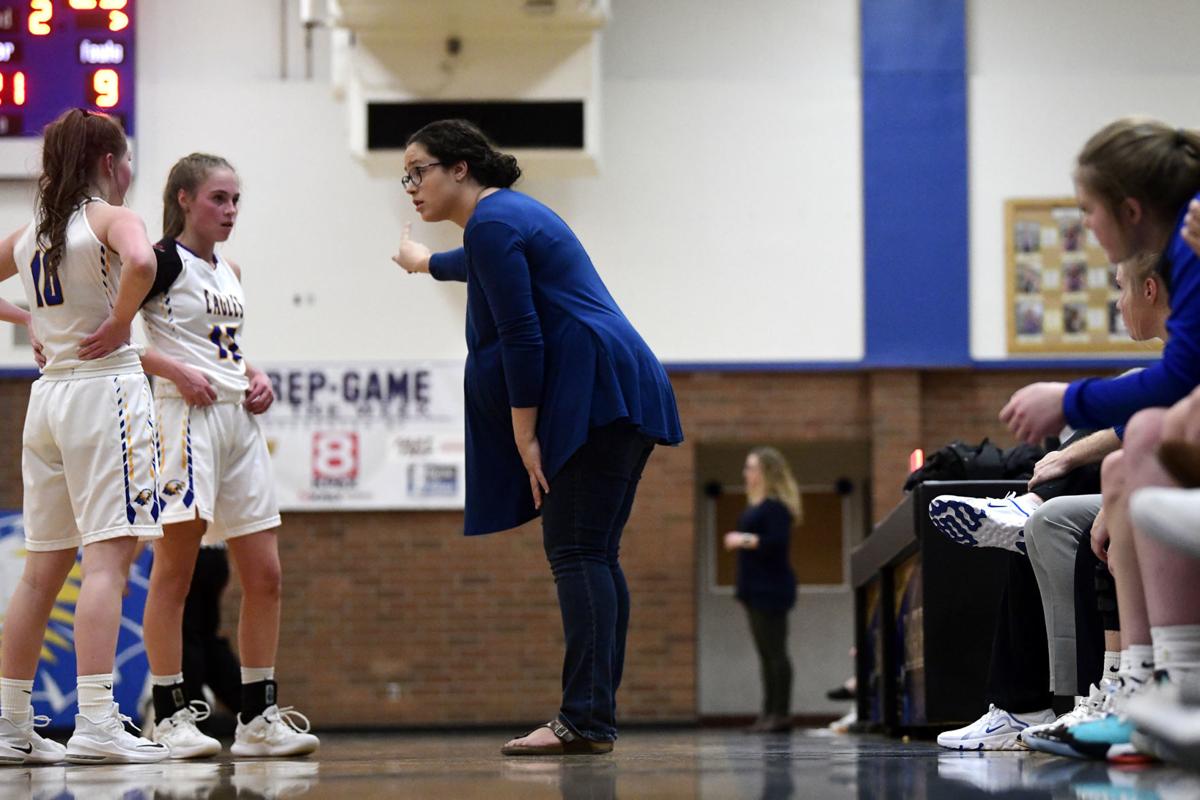 In her first season at the helm of the Eagles program, Hansen is also expecting twins and soon. But even with her Jan. 15 due date fast approaching, the Loyola Sacred Heart product is happier than ever to be on the court — even if it’s sometimes been a challenge.

“It’s good. I’m not one to sit, so it’s really hard for me. I really like to demonstrate and be up and active, especially in the last month I just can’t be, which is hard,” Hansen said.

"I’m uncomfortable myself, but I have to show up and have focus and energy for the girls. It’s been challenging for sure … I’ve surprising felt much better than I thought I would, so it’s been good, it hasn’t hindered me too much, but energy wise, it’s taken a toll these past three weeks. I’ve just been trying to push through.”

Originally from Arlee, Hansen, then Pfau, had a standout high school career with Loyola. Following her time as a Missoula-area prep, she played at Weber State for two years before transferring to Carroll College.

With the Saints she enjoyed a strong two seasons, finding a role as a spot-up 3-point shooter. Those lessons, especially at Weber State, have transferred over to her coaching career.

Hansen took over a proud Big Sky girls basketball program in disarray. Following back-to-back Class AA state titles in 2008 and 2009, the Eagles have won just two games in six trips to the state tournament since those championships.

Big Sky is 6-54 over the past three seasons.

“At Weber, for two years there, we didn’t win many games, so I know what that feels like and I can sympathize with that a little bit,” Hansen said. “But number one, what works for one program doesn’t always work for another and number two, at Weber, I loved my teammates and I love playing with my teammates whether or not we won.

"So trying to build that culture. We’ve got each other’s back, we see each other working hard. Celebrate the small wins in a game.”

On Tuesday night the Eagles fell 67-21 to Kalispell Glacier, but even then the coaching staff still sees small things that give them hope they are trending in the right direction. Hansen has not had to once question the commitment or dedication of her team and seemed impressed with how they have stuck together this year despite tough circumstances.

Big Sky has yet to win a game this year, though they feel it could be coming soon.

“We’re rebuilding, for sure. I think we’re progressively getting better as the weeks go on,” Hansen said. “By tournament time is when it really counts, so that’s where we want to be, goal-wise, by then. We want to be ready. Just taking it one day at a time. We’ve got to build on the baby steps.”

Hansen is not the only coach in her family working a rebuild. Specifically her husband, Ryan, who is also in his first year as head coach of the Big Sky boys squad. Basketball season often gets hectic and considering the two Eagles teams are rarely at home at the same time, she has not had the chance to watch her husband coach very often lately.

Still, though, it works for the young and growing family.

“We already have a toddler and since I’m expecting twins any day now, it’s been a bit chaotic,” Hansen said with a laugh. “It’s definitely fun. We’re basketball people so we should probably go home and let it rest a little bit, but we don’t. We talk about this, or this option, or what we could have done better here.

“It’s good, it’s a really good connection point for us.”

While this winter will soon get decidedly more hectic personally for both parents, so will the basketball. Big Sky just started its Western AA slate and with a strong slate of teams in the division, it will get even tougher.

Even so, that’s just fine for Hansen.

“Like we just keep telling the girls, just make a small goal and move on to the next one,” Hansen said. “We’ll be where we want to be. We’ve got a month and a half until divisional and we just need to stay together … we’re getting there. Slowly but surely, we’re getting there.”

The Bulldogs wanted to open Western AA conference play with a win, and they made sure they did so Saturday.