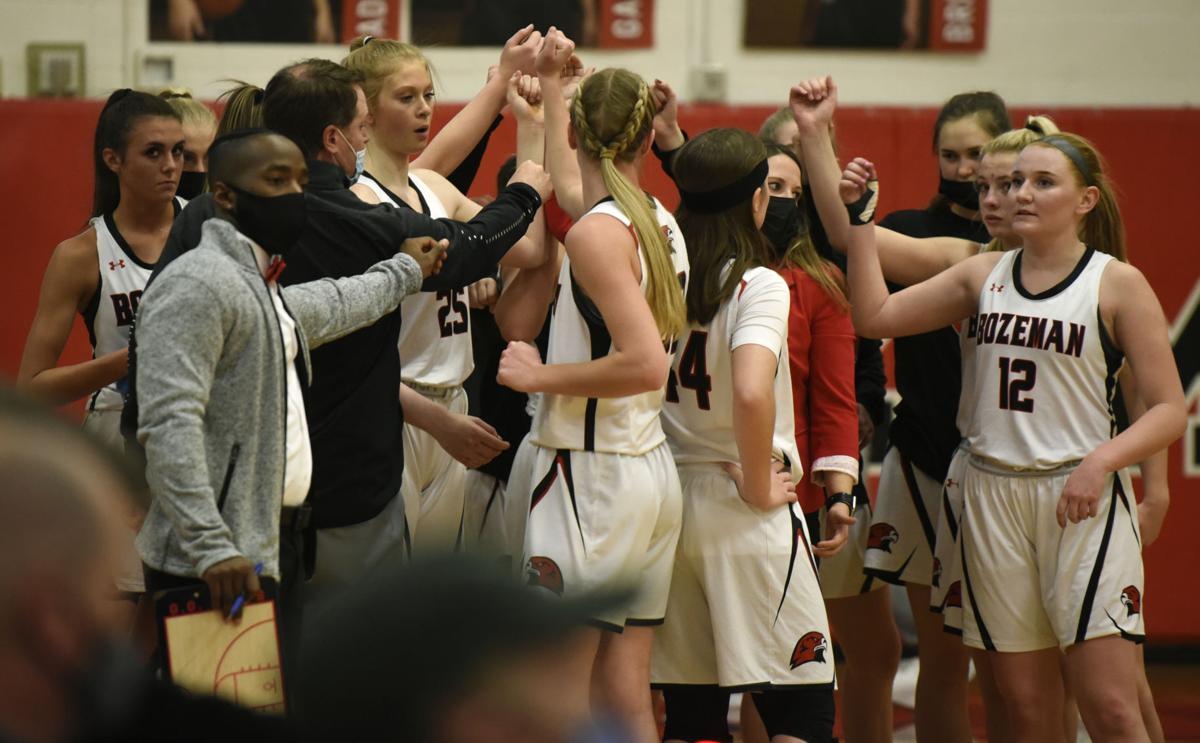 The Hawks put their hands into the huddle at the end of a timeout Thursday at Bozeman High. 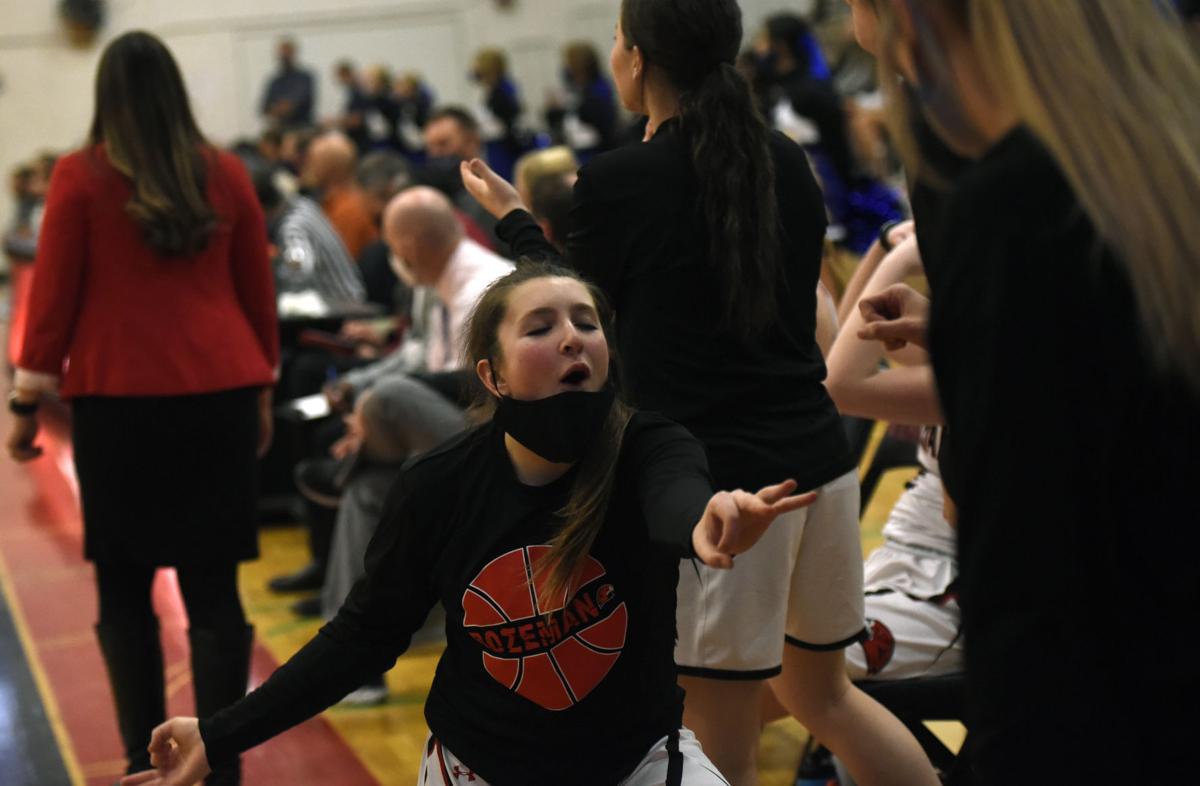 The Hawks celebrate a point Thursday at Bozeman High. 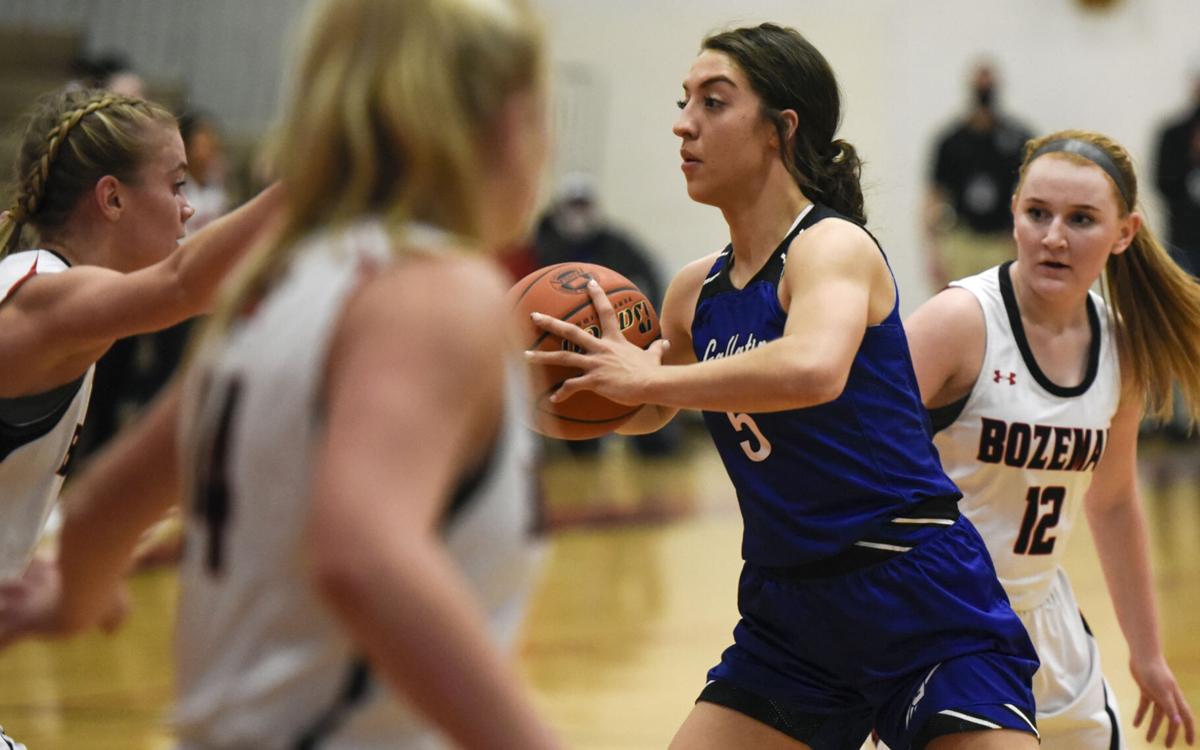 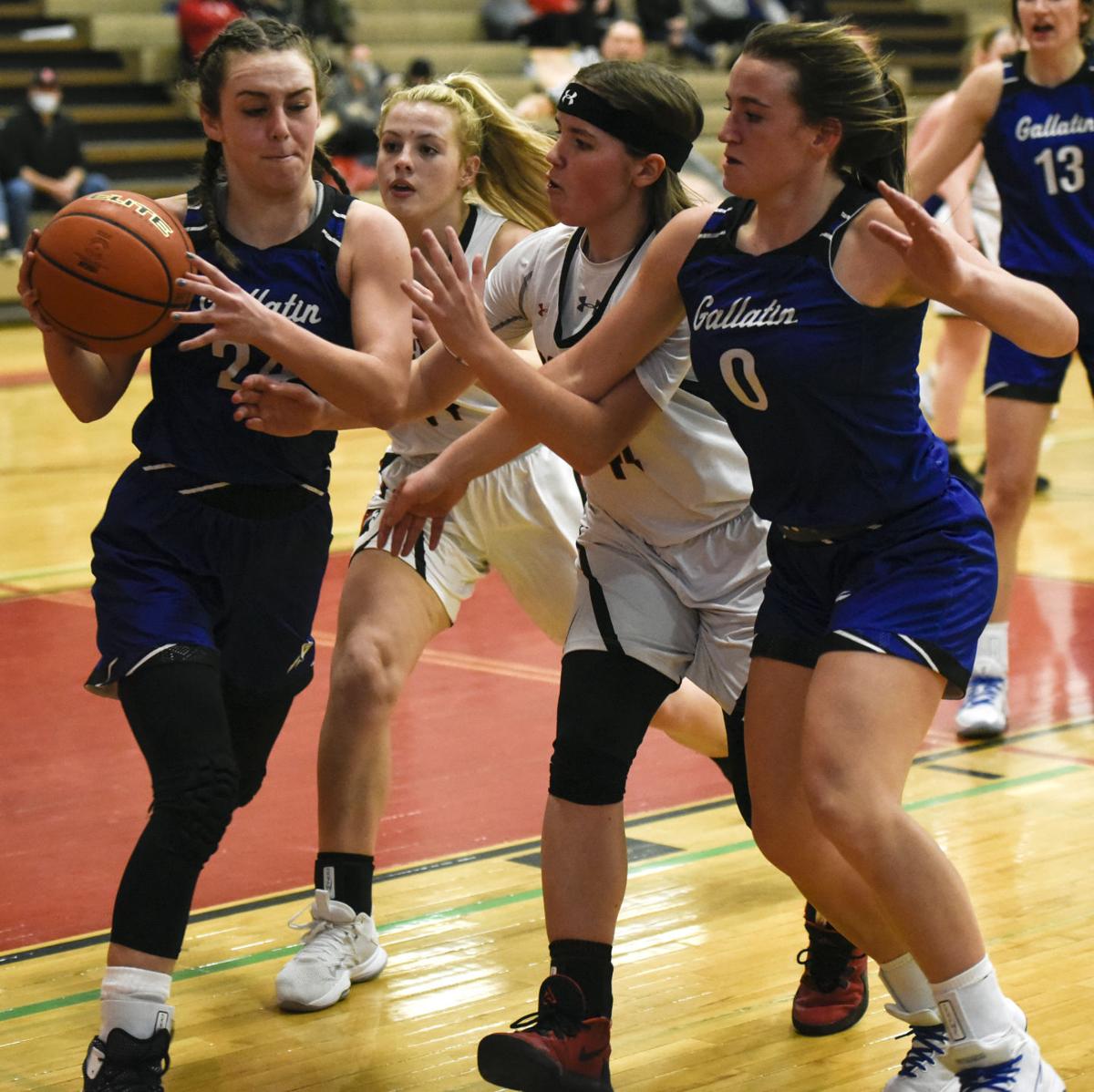 The Hawks put their hands into the huddle at the end of a timeout Thursday at Bozeman High.

The Hawks celebrate a point Thursday at Bozeman High.

BOZEMAN — Macy Mayer anticipated a pass and intercepted it. She dribbled up the court and bounced the ball across the lane. Payton Putnam caught it and made the fast-break layup.

Bozeman was in control early and didn’t allow Gallatin much room for error. The Hawks’ seniors made sure of that.

Fueled by an early lead, the Hawks went on to defeat the Raptors 55-26 for their second crosstown victory of the season Thursday at Bozeman High on the Hawks’ senior night.

The Hawks recognized Putnam, Mayer, Gabby Klein, Britlyn Mailey, Addi Ekstrom and Felicity Schott, their seniors. Even Ekstrom, a Carroll signee who tore her ACL during the soccer season, was in uniform.

With only five games left of the regular season, shortened because of coronavirus concerns, the Hawks enjoyed the win.

“It’s been really fun to have them as friends alongside me,” Putnam said. “They’ve been my best friends. I’ve made friendships that will last for a lifetime. Especially during COVID, having something I can go and do everyday with the people that I love, it’s nice in the crazy times we’re in.”

The Hawks used their full-court pressure and efficient ball movement to take a 9-2 lead just a few minutes into the game. The Hawks believe they can rely on their aggressive, fast-paced style.

“I think that’s what we’re really strong at,” Klein said, “setting the tone from the get-go and making the other team play faster than they’re comfortable.”

But the game was far from over. The Raptors cut the lead down to five points multiple times in the second quarter.

Averi Smith made a jump shot despite a foul to slash the deficit to five. Later in the frame, Smith hit a layup after Molly O’Connor passed her the ball in rhythm from the wing. Gallatin also rebounded effectively early on, often limiting the Hawks to one shot per possession.

This is the improvement Raptors head coach Wes Holmquist was looking for when the season started.

The Raptors (0-9) are still seeking their first win. But they have been more competitive in recent weeks. On Jan. 29, the Raptors nearly won at Belgrade but eventually fell 40-38.

“We just need to be consistent,” Holmquist said. “That’s what we’re really after right now, being consistent and staying mentally tough which is not an easy thing to do when you’re in the situation we’re in right now. I just commend the girls for sticking with the process.”

The Hawks (7-2) were more poised, however. Late in the second quarter, Emily Williams hit a 3-pointer to boost Bozeman’s lead to nine. A few moments later, Nicole D’Agostino scrambled for a loose ball and went up for a second-chance layup, giving the Hawks their 27-16 lead going into intermission.

“They’re a tough team. They come out with fire,” Putnam said. “Setting the tempo and playing our game is definitely important during a game like that.”

After losing by 34 points to Billings West to open the season, the Hawks responded with a six-game win streak. For the season, they’ve scored 52.1 points per game while limiting opponents to 46.7.

Then last week, the Hawks lost to Billings Skyview, a team they defeated previously this season, by 18. Bozeman was again tasked with bouncing back from a loss.

The Hawks successfully did so. They opened Thursday’s second half by expanding on their lead. Mayer, who’s averaging 14.7 points on 44% shooting and nine rebounds per game, made a layup at the beginning of the third quarter. A few moments later, despite Gallatin making things tough defensively, Mayer hit a 3 from the left wing. This gave Bozeman a 32-16 advantage.

“They’re a very talented, very athletic team. We knew what we were up against,” Holmquist said. “They’re a good, experienced team with a lot of players back, which is the exact opposite of us. We’ve got to learn from these mistakes and just keep growing.”

The Raptors, without any seniors this season, made enough plays to prevent the Hawks from building their lead quickly early in the second half. Keaton Lynn connected on a 3 to get Gallatin closer.

But Bozeman refused to let the lead vanish.

In the final seconds of the third quarter, Schott dribbled under the hoop. She found Klein open along the baseline. She got her jump shot off just as the buzzer sounded and made it.

The Hawks led 41-21. Klein smiled as her teammates and coaches greeted her from the bench. Bozeman was on its way to victory.

Mayer finished with a game-high 18 points while Klein added 12 and Putnum scored eight. Smith led the Raptors with eight points.

Klein believes the Hawks can use this victory as the beginning of another winning streak.

“I think we’ve got to keep playing as a team and just stay composed,” Klein said. “If everyone keeps contributing like they were, we’re going to be on a good path.”