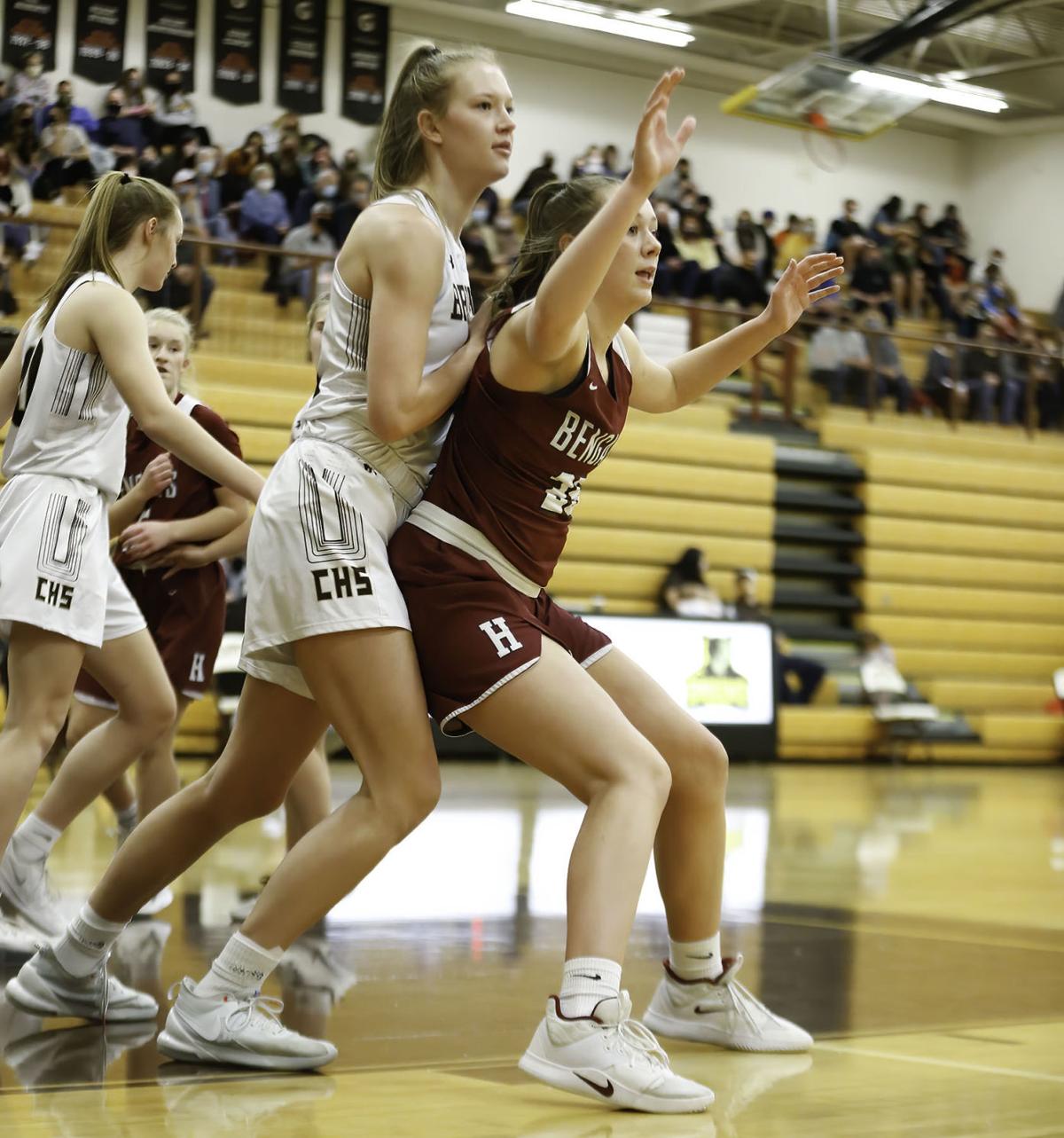 Paige Bartsch is pictured guarding Liz Heuiser of Helena High in the Bruins 44-28 win over the Bengals in the Bears Den. 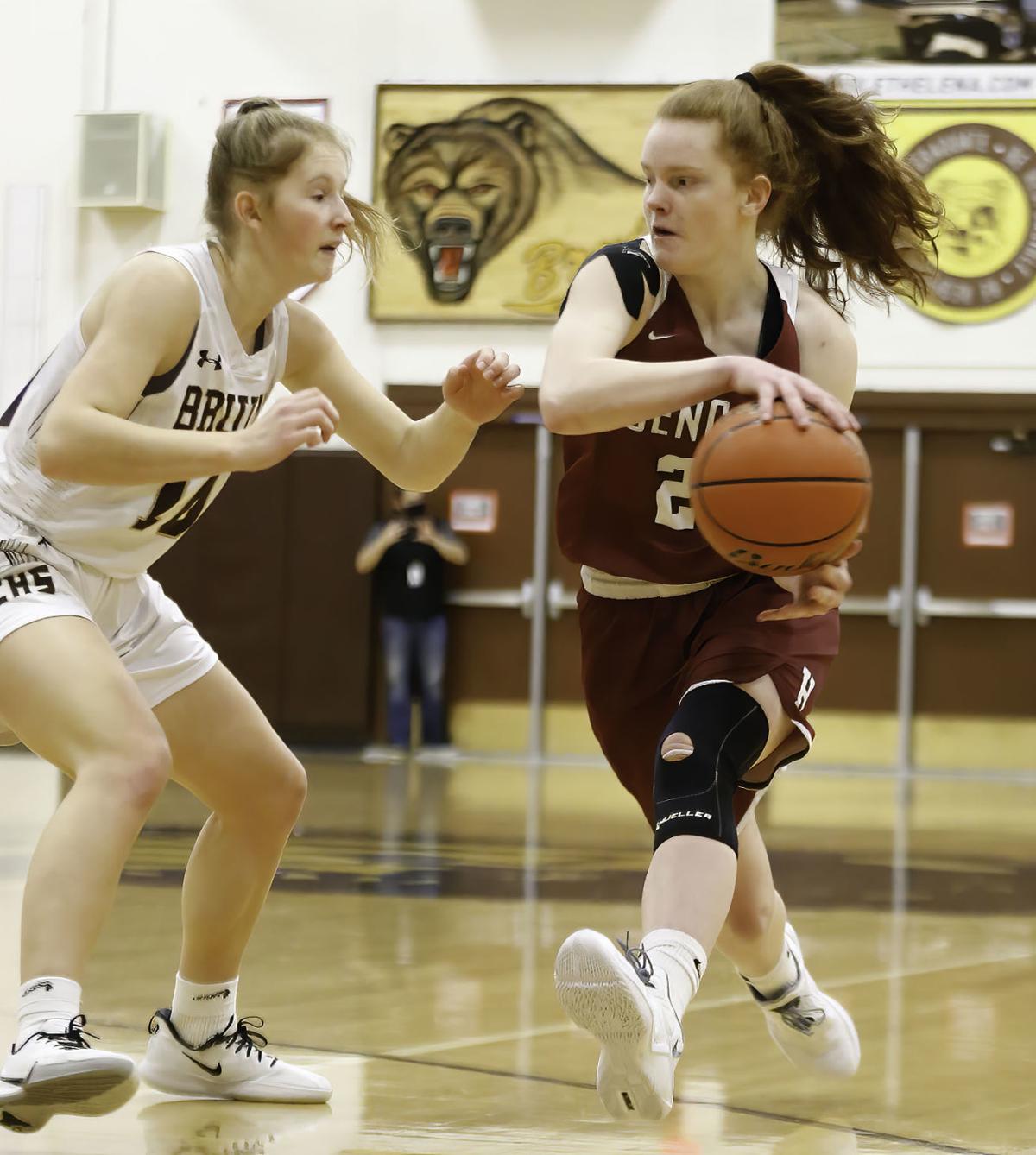 Helena Capital's Audrey Hofer guards Kylie Lantz of Helena High in a 44-28 win for the Bruins Friday night at the Bears Den.

Paige Bartsch is pictured guarding Liz Heuiser of Helena High in the Bruins 44-28 win over the Bengals in the Bears Den.

Helena Capital's Audrey Hofer guards Kylie Lantz of Helena High in a 44-28 win for the Bruins Friday night at the Bears Den.

HELENA — Every game has a turning point and in Friday's crosstown girls basketball game, it was Audrey Hofer's 3-pointer at the end of the third quarter.

Prior to that, the upstart Bengals were hanging right with top-ranked Capital and had cut a six-point halftime lead down to three at 28-25. But on the final possession of the third quarter, Hofer slipped unnoticed behind the 3-point line and as time expired, she buried a shot that put the Bruins back up six.

Early in the fourth, Mara McGinley added a trey of her own and the Capital clamped down, allowing three points in the last eight minutes, of a 44-28 victory.

"It was huge," Capital head coach Katie Garcin-Forba said of Hofer's shot. "It changed the momentum. Audrey has the ability to make big plays. She did it last year, she's done it this year. She's playing with a lot of confidence right now and that was a huge moment for her."

Audrey Hofer gets open at the last minute. She drills it. Huge make. 31-25 heading to the 4th. Capital up. #mtscores pic.twitter.com/2GIon6RPwu

It was also a huge moment in the game and it happened, because of the attention teams pay to Dani and Paige Bartsch.

"They really like to double down on Dani and Paige," Hofer said. "Which is probably the best option, but it leaves me and some other guards open. I knew there was only a few seconds on the clock and someone had to shoot it."

Once Capital (12-1) was up by nine points, the defense went to work and allowed just one 3-pointer to Kylie Lantz in the fourth as they pulled away for the win.

"We executed our game plan to a T," Helena High head coach Ben Dudek said. "We were right there in the thrid quarter and then that 3-pointer went in at the end. Capital is a great team and they did what great teams do, which is close it out in the fourth quarter. But our girls competed at a high level. Tonight, it was about crosstown, but we also have bigger games coming up and to have a chance, down three near the end of the third quarter is exactly where we want to be."

Early on, the Bengals, who had won two straight coming in, were determined to go blow for blow with the Bruins. Jaymee Sheridan and Dani Bartsch each scored six in the first quarter, but the first triple of the game by Lantz and five points from Avery Kraft cut the CHS lead to 14-12 after eight minutes.

In the opening stages of the second, the Bengals even grabbed the lead momentarily (15-14) on an up-and-under move by Alex Bullock, but the Bruins scored on their next possession and ripped off the next seven points to take a 23-17 lead at the half.

Dani Bartsch scored nine points in the first half, but Helena made things tougher on her than in the first meeting.

"They didn't leave me as open as last time," Bartsch said. "And my shot wasn't falling, so that hurt my confidence a bit, but I just tried to stay aggressive."

That aggressive nature paid off, particularly on the boards. In the first half, Capital grabbed 50 percent of its misses, which led to eight second-chance points.

However, the defense was the star of the night for Capital, as it held Helena High to 0.62 points per possession, compared to 1.0 for the Bruins, and limited the Bengals to 31 percent from the field.

"Defense is a big emphasis for us," Garcin-Forba said. "We want to really fundamentally sound and at one point,  I heard Dani yell: "Four minutes, let's go. Let's finish this.' That's our leader and that gets us going. They knew they had to lock it in and once we get one stop and then another, we were able to get into a rhythm."

When the game was over, Dani Bartsch finished with 15 points, 13 rebounds (five offensive) and six assists. Paige Bartsch pitched in with six points and 12 rebounds, while fellow seniors Hofer and Jaymee Sheridan each had eight points.

The win also capped an impressive run of four straight wins in the crosstown series for the Capital seniors, who experienced plenty of struggles earlier in their careers against Helena High.

"I'm just relieved, the stress is over," Dani said. "It's obviously sad. I know so many of those girls at Helena High and I'll miss playing against them. But I'm happy to go out with a win on such an emotional night."

Lantz paced the Bengals with eight points, a total that was matched by another senior, Liz Heusier. Bullock and Kraft both had five for Helena (6-7), which concluded its regular season against Capital.

The Bengals could have played Monday against Big Sky, but they are unable to improve their seed for the Western AA playoffs and will play at Glacier next week in a one-game playoff to reach state.

Capital, on the other hand, will play at Missoula Big Sky on Saturday as the Bruins are still attempting to lock up the No. 1 seed in the Western AA. If CHS wins against Big Sky and Missoula Hellgate defeats Kalispell Flathead, the Bruins and Knights would hold a coin flip to determine the No. 1 seed.

Toss in pizza, and cheerleading is a guy thing at Helena Capital

It's hard to say what causes people to choose a sport or activity. But sometimes, it's as simple as free pizza and an open mind.

Reversal of fortune? Dawson men get another crack at first national tourney berth

The man behind the muscle: New UM strength coach Dan Ryan works to make Griz 'the most physical team in the country'