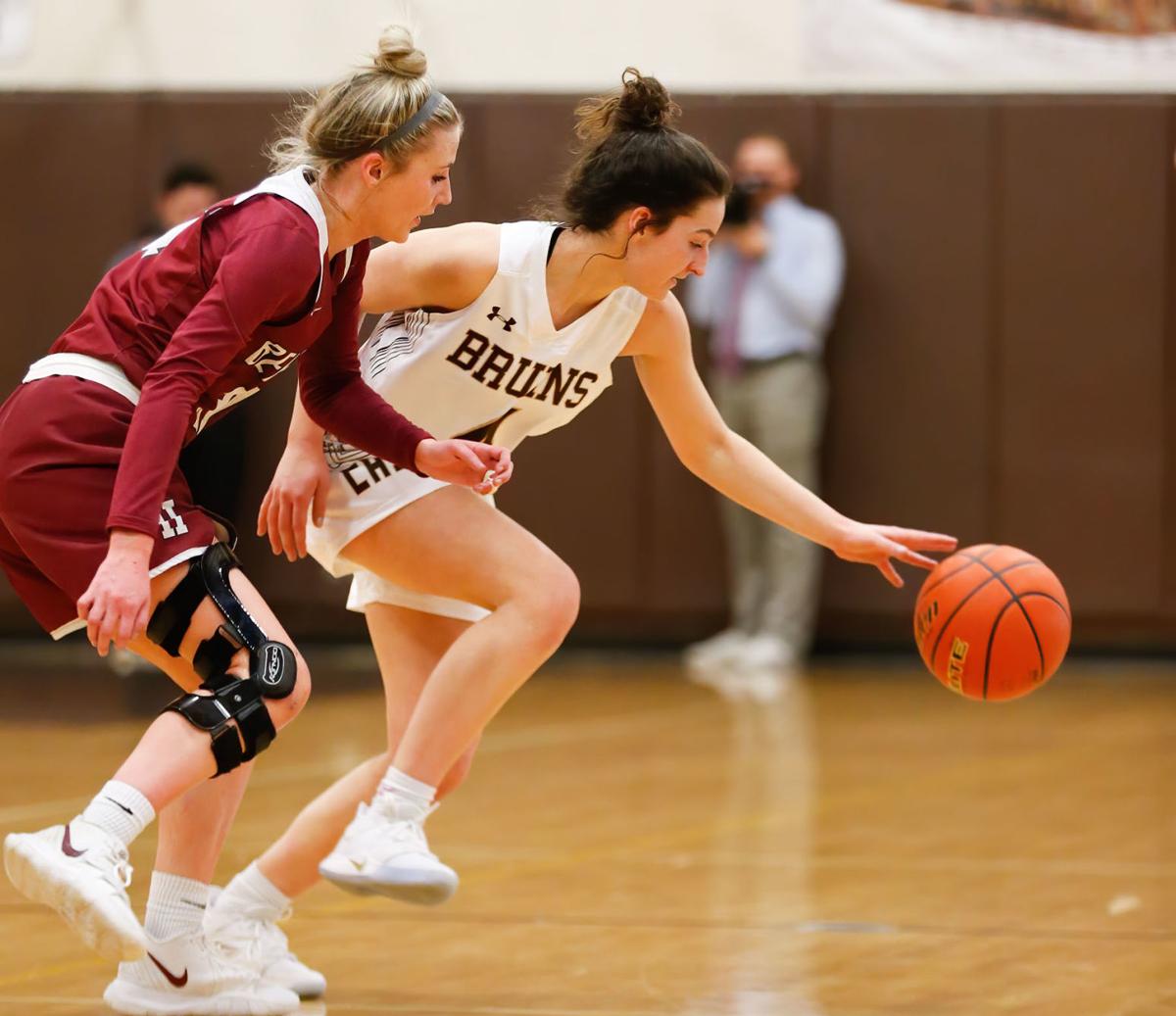 Mashayla O'Malley takes the ball away from Helena High's McKayla Kloker in the Bruins overtime win over the Bengals Thursday the Bears Den. 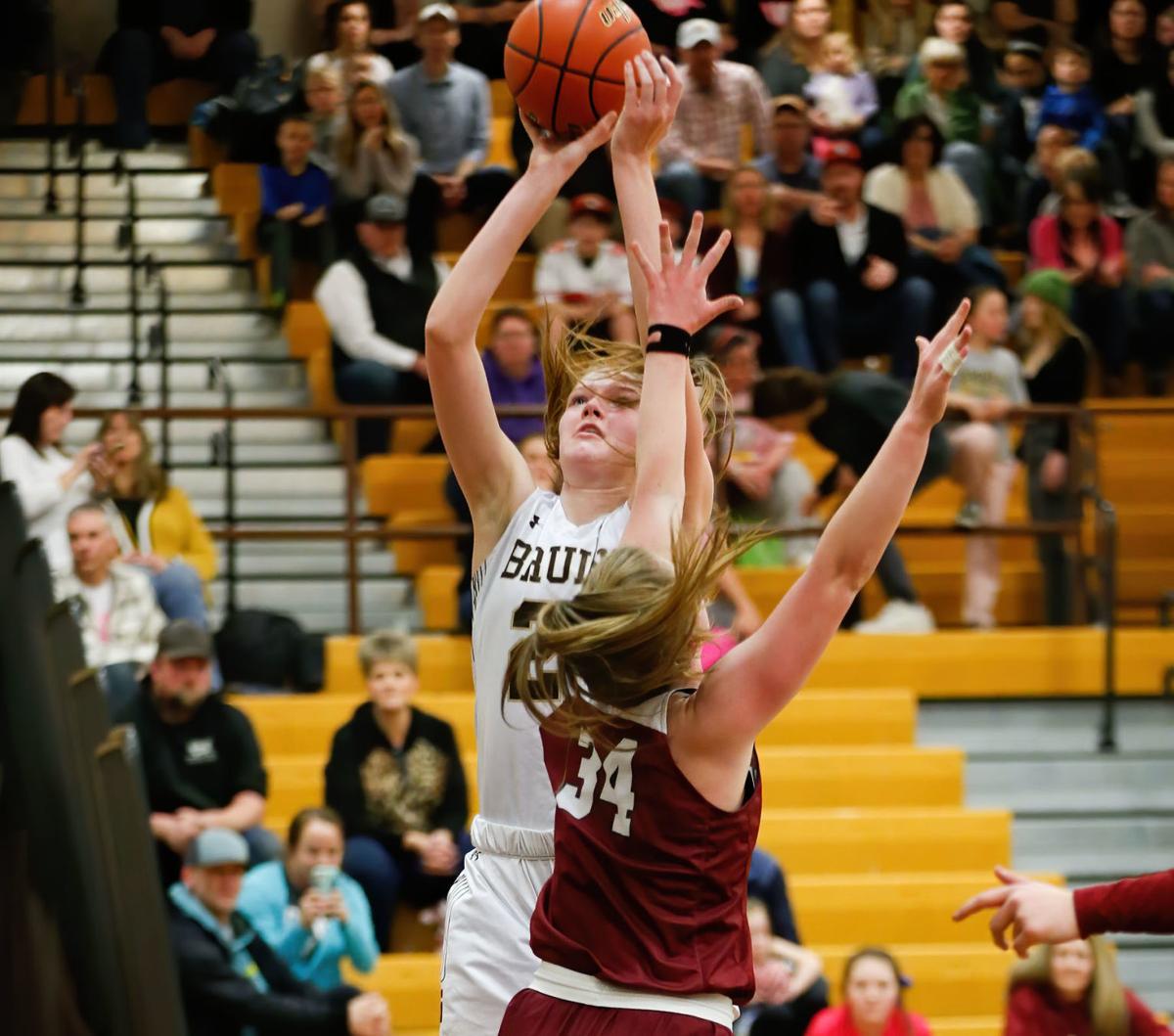 Paige Bartsch shoots the ball in Capital's win over Helena High back in January. 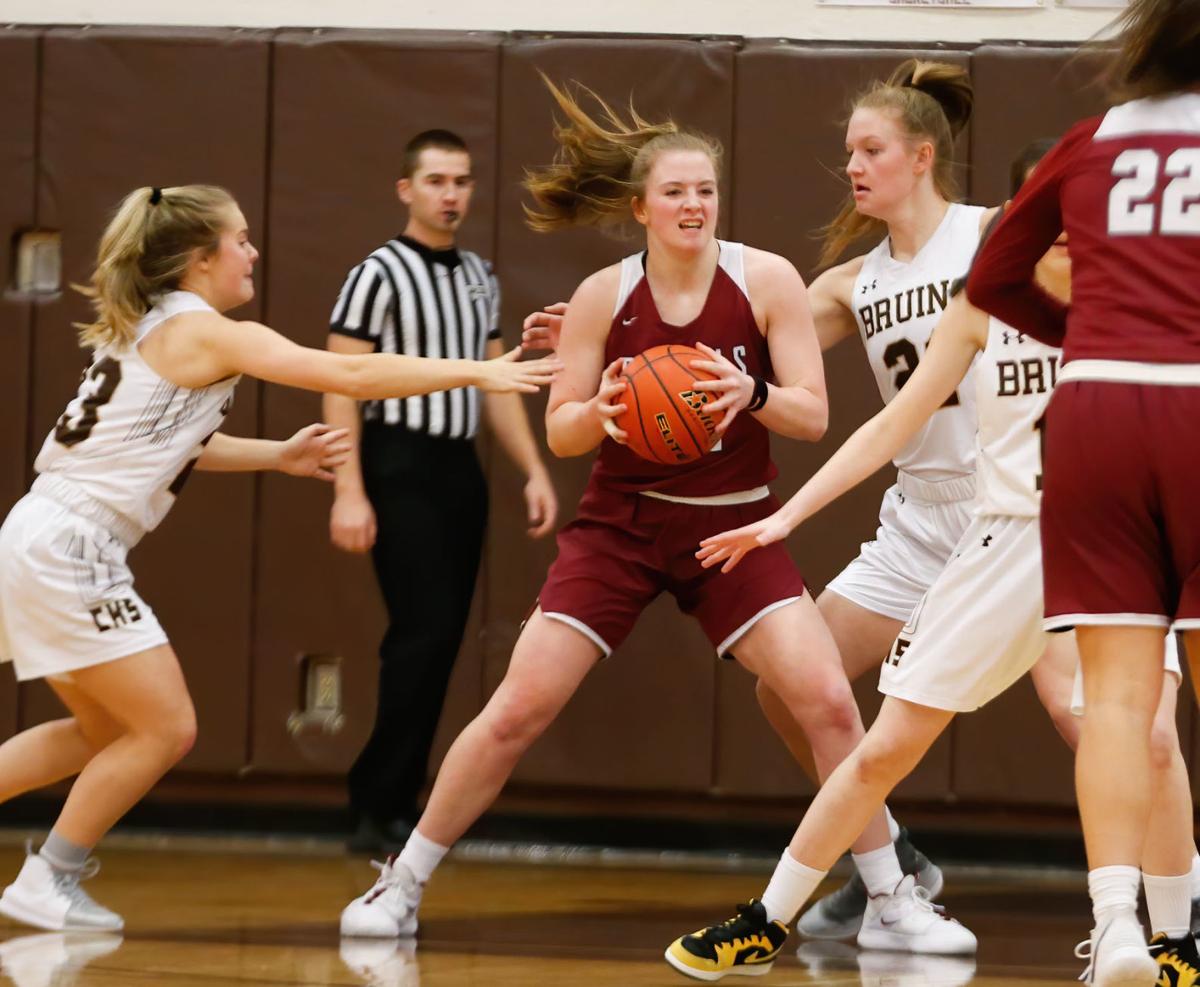 Caroline Bullock of Helena High is swarmed by Capital defenders Thursday night in the Bruins win.

Mashayla O'Malley takes the ball away from Helena High's McKayla Kloker in the Bruins overtime win over the Bengals Thursday the Bears Den.

Paige Bartsch shoots the ball in Capital's win over Helena High back in January.

Caroline Bullock of Helena High is swarmed by Capital defenders Thursday night in the Bruins win.

HELENA — Some wins just mean more than others and for the Helena Capital girls basketball team, nothing mattered more than beating Helena High.

And after years of frustration, including three losses last season and five years of home defeats, the Bruins finally got the monkey off their back, thanks to a thrilling 39-34 overtime victory Thursday night at the Bears Den.

Even though some observers might say it was a game won ugly, to the Bruins, it couldn't have been more beautiful.

"This feels so good, it feels great," Paige Bartsch said. "That was definitely the craziest basketball game I have ever been a part of and the most exciting."

Crazy and exciting are certainly apt adjectives to describe the crosstown battle between Capital and Helena, but another might be slugfest, because that's what it was for four quarters and change.

Early on, both teams struggled to score, yet the Bengals used a first-quarter 3-pointer from McKayla Kloker to grab an 8-3 lead after one.

A triple from Kylie Lantz in the second helped keep the Bruins at bay and sent Helena into half leading top-ranked Capital 13-9.

Kylie Lantz sticks the 3 and holds the follow through. 11-5. 4:02 first half. pic.twitter.com/glbVp7uHmk

"I think it was honestly our fault," Paige Bartsh said. "We weren't passing great. We had 12 turnovers at the half, so we were not playing great ourselves."

Helena's suffocating defense held the Bruins to just 16.7 percent from the field in the first half and held leading scorer Mara McGinley without a point.

"I thought we had a great game plan and we did a really good job," Helena High head coach Eric Peterson said. "We didn't score a lot of points but our defense was on point and I have always said that our defense is going to give us a chance to win and it did tonight."

Still, Capital was hanging around thanks to a stellar defensive effort in its own right, but, a 9-0 run to close the third, which featured another Kloker trey, put the Bruins behind, 26-16, with just eight minutes to go.

Despite having playing with three and four fouls, respectively, Paige and Dani Bartsch took over in the fourth quarter.

This has been Paige Bartsch all 4th. O’Malley two more FTs. 28-27 Bengals. pic.twitter.com/tB16jWVBKE

Each scored a bucket to quickly trim the lead to five and a few minutes later, following three free throws from Paige and another bucket by Dani, the score was tied 28-28 with just over a minute to go.

For the third time, Kloker hit from deep and this came with just 37 seconds left on the clock. It also put her team up three.

Needing a stop, the Bengals simply couldn't get it. Bartsch made a free throw and after an offensive rebound, Mashayla O'Malley was able to hit two free throws to send the game to overtime.

"I never thought we were going to lose that game," O'Malley said. "I have such a strong desire to win, especially against Helena High, I was like, I am going to make sure that doesn't happen."

Her clutch rebound and free throws ensured it didn't. Her 14 points, five rebounds and five steals were also gigantic in the final outcome.

"I was shaking a little before those free throws," O'Malley said. "I didn't want to airball them. But once we got to overtime, I knew we had it."

Another Kloker 3-pointer made it far from a done deal. That gave the Bengals a 34-33 lead with 70 seconds left in the extra frame.

But it didn't last long. Dani found her sister Paige for two to take the lead back. Then, with the Bruins protecting a 3-point lead, junior Jaymee Sheridan stole the ball, made two free throws and iced the win.

"It feels great," Garcin-Forba said. "The credit goes to the girls. We didn't play our best basketball but they never gave up. They showed a lot of heart and never felt they were out of it."

"It was scary, but it feels great," Dani Bartsch said. "The first win in five years against them at home, I'll take it, however it is. We were struggling in just about every part of the game but in the end, we pulled ourselves together, we played lock-down defense, we had 15 stops in a row and that made it extra sweet."

Many of those stops Bartsch alluded to, can be attributed to her sister Paige, who officially finished the game with five blocks, even if it seemed like much more.

"She was not going to be denied," Garcin-Forba said. "That's the best way I can describe it. She dominated on the defensive end, finished strong and made free throws for us. She and Mashayla really took over and just weren't going to let us lose that game."

When the thriller was in the books, Paige Bartsch finished 15 points, 13 rebounds and five blocks -- all game-highs. She also added three steals.

For Helena, Kloker led the way with 12 points, all on threes, while Lantz, who got the start, wound up with 10.

"The girls did a great job," Peterson said. "But at the end of the game, we still lost and you have to give credit to Capital. They beat us. We have no excuses."

The win was the first at home for Capital against Helena High in five years and after losing three times to the Bengals last season, including in the state semifinals, it's one the Bruins will savor.

"Personally, I have been waiting for that game since last year," O'Malley said. "That is the biggest game to me and now that we have it, we can sail through the rest of the season. We have nothing to lose."