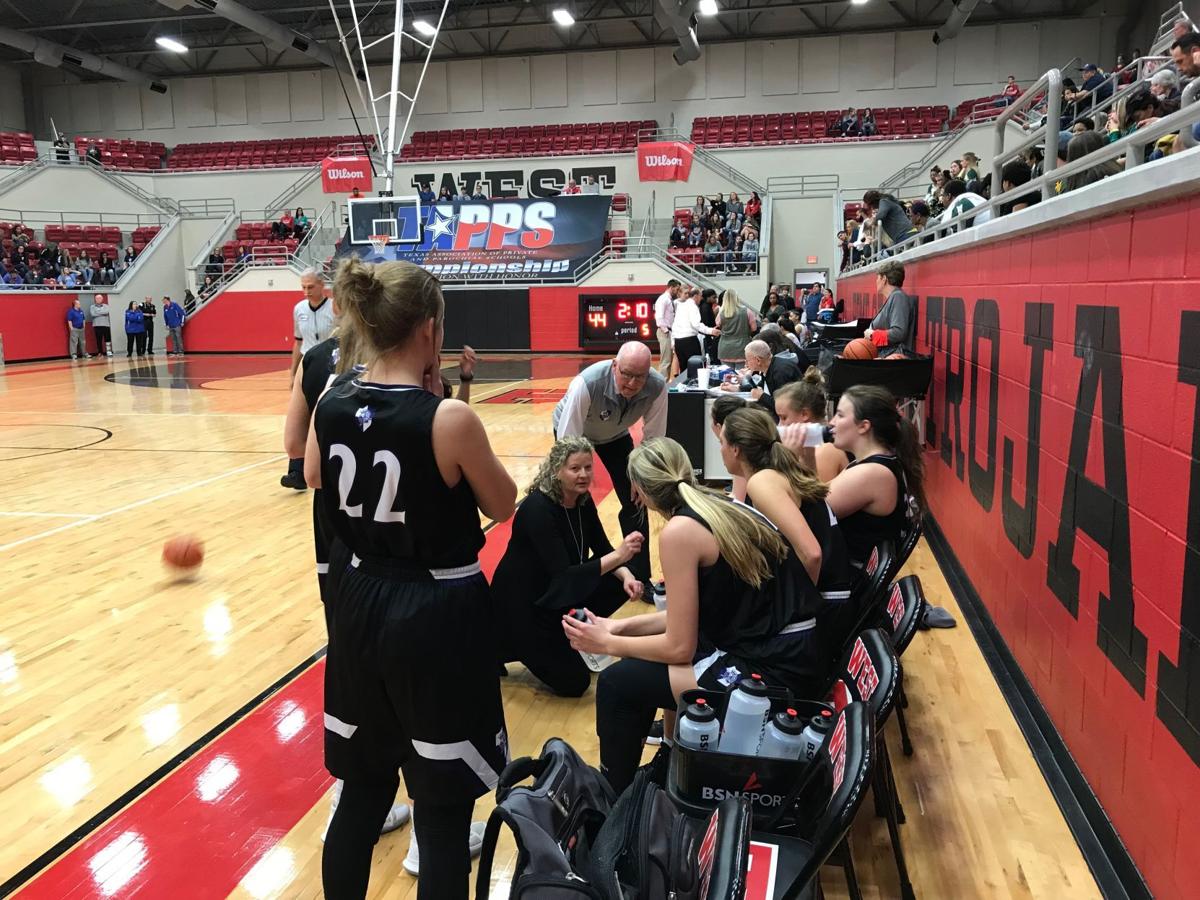 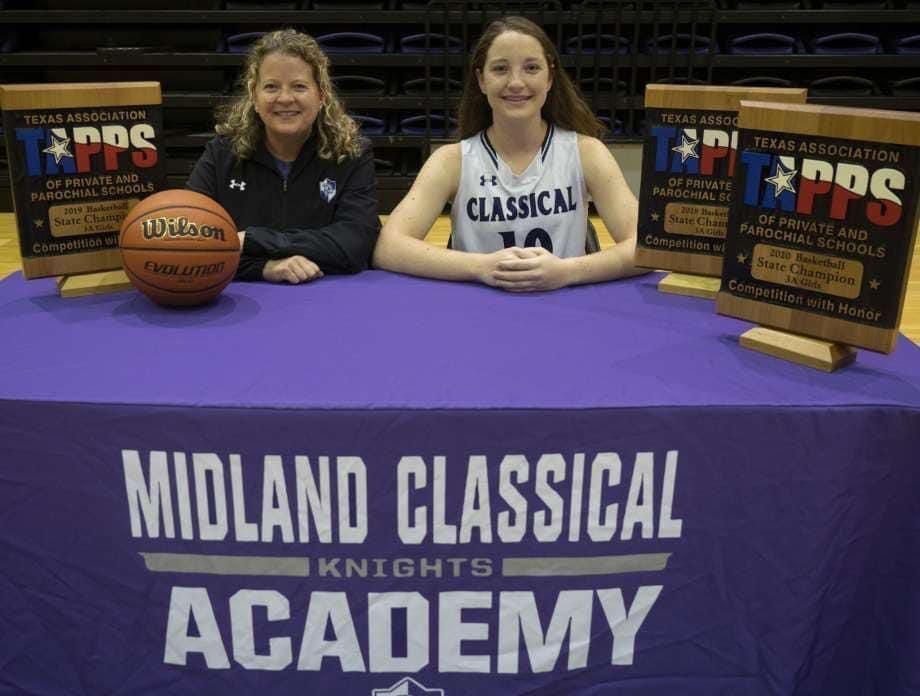 Midland Classical Academy coach Carla (Beattie) Cunneen, left, and then-senior Leia Beattie pose for a photo with their three state championships. Beattie is now in her freshman season playing for the Montana State Bobcats, the rival of the Montana Grizzlies, where her aunt Carla played in college. 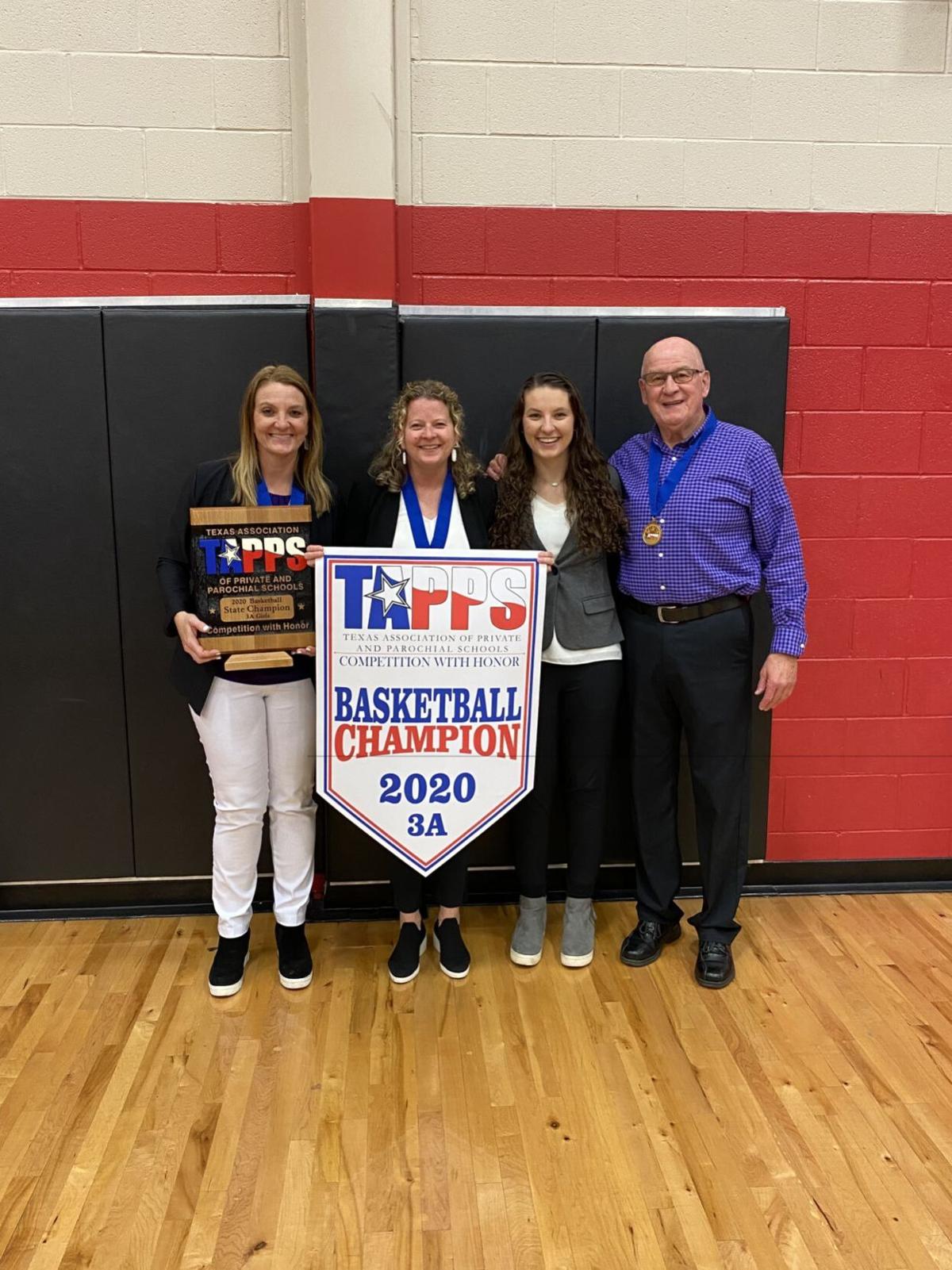 Midland Classical Academy coaches Kelly (Pilcher) Beattie, Carla (Beattie) Cunneen, Kayla (Beattie) Lehman and Jim Beattie pose with their 2020 State 3A championship plague and banner in Texas. Kelly and Carla are former Montana Lady Griz players, Kayla is the daughter of Kelly and neice of Carla, and Jim is the father of Carla. 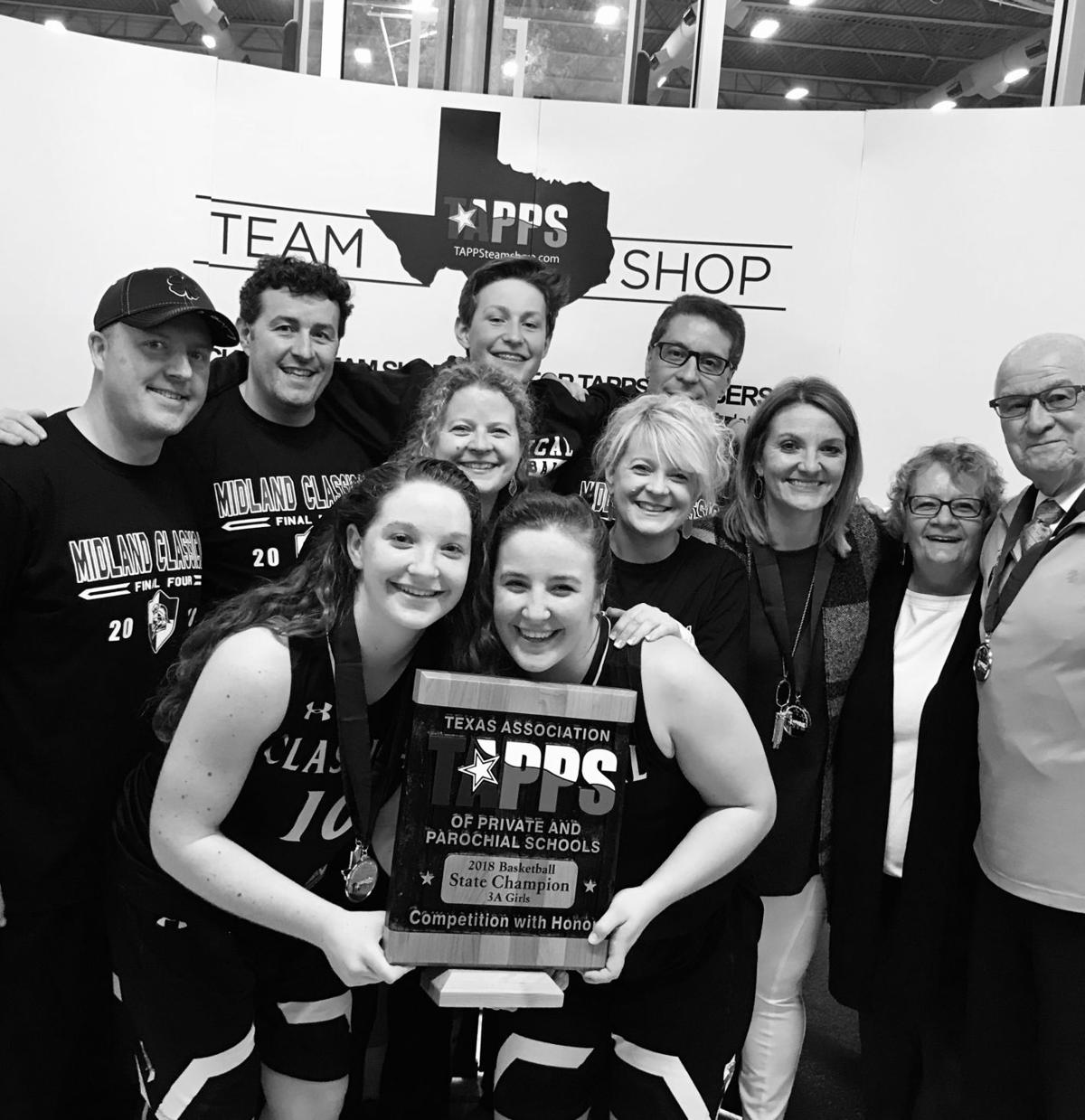 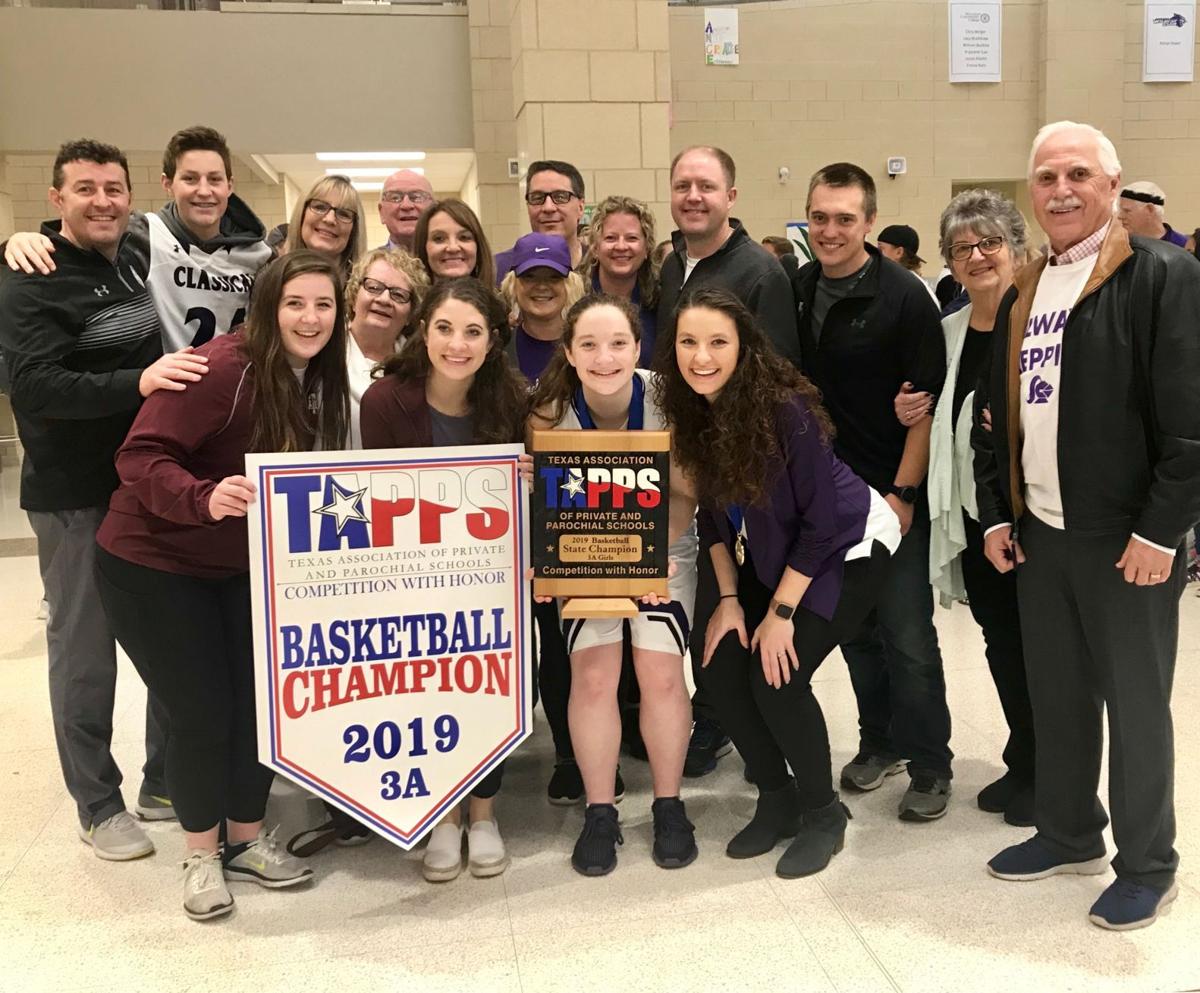 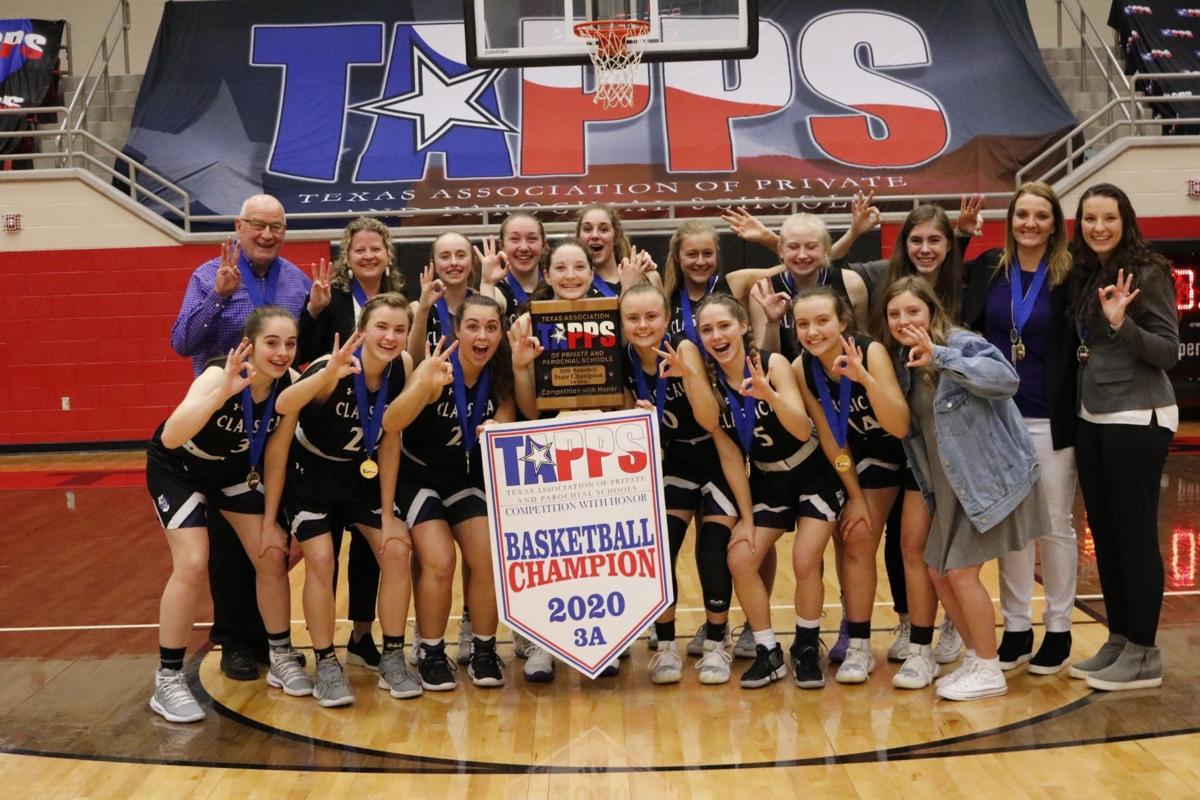 Midland Classical Academy coach Carla (Beattie) Cunneen, left, and then-senior Leia Beattie pose for a photo with their three state championships. Beattie is now in her freshman season playing for the Montana State Bobcats, the rival of the Montana Grizzlies, where her aunt Carla played in college.

Midland Classical Academy coaches Kelly (Pilcher) Beattie, Carla (Beattie) Cunneen, Kayla (Beattie) Lehman and Jim Beattie pose with their 2020 State 3A championship plague and banner in Texas. Kelly and Carla are former Montana Lady Griz players, Kayla is the daughter of Kelly and neice of Carla, and Jim is the father of Carla.

MISSOULA — Former Philipsburg and Montana Lady Griz basketball standout Carla (Beattie) Cunneen had a simple goal when she started coaching hoops at Midland Classical Academy in Texas: she wanted to coach her four nieces through their time in high school.

Ten years later, Carla not only accomplished that but in the process built a program that won four state championships in the past seven years and captured a third consecutive crown this past March by using a literal and figurative family approach based on her roots in Montana.

“It was really fun to see the progress that the kids made and create special memories with our family,” said Carla, who stepped down as the head coach at the private Christian school last month after having coached on the same staff as her father, sister-in-law and oldest niece.

“When I say ‘family,’ I’m really talking about all the girls at Midland Classical because you have an opportunity to invest in the lives of the kids off the court as well. That’s what makes it such a special place.”

Building a family atmosphere at MCA didn’t just mean blood family to Carla. She wanted all the kids in the program to feel like they were cared for, so she implemented many of the lessons she learned from her time in Montana while building the championship-caliber program.

Those lessons began in Philipsburg, where her father, Jim Beattie, an Anaconda native, shot hoops with her for an hour nearly every morning before school. She grew up in the gym and on school buses while he was coaching, observing how he treated the kids he coached like they were his own children.

As Carla matured, she learned about the importance of how to build relationships with kids. The simple act of her high school coach, Ron Estes, at Philipsburg playing HORSE with her after nearly every practice while the two of them talked about basketball and life still sticks with her.

“When you treat kids like family, they want to play hard for you,” said Carla, who was the state’s all-time leading scorer with 2,508 points when she graduated in 1990 and now ranks third. Also a volleyball and javelin standout, she's ranked first for made free throws in a career (565), second for total points in a season (882), fourth for career points per game (25.8) and second for points per game in a season (33.9). In 2019, 406MTSports named her the greatest athlete to come out of the city of Philipsburg.

Carla began to get her basketball Ph.D. while playing for Montana coach Robin Selvig, who was in his 13th season of a 38-year career when she arrived on campus. Under his guidance, he helped her become the Big Sky Sixth Player of the Year and UM’s NCAA Woman of the Year as a senior.

Carla took what she learned at UM and implemented it during three years at Havre High School, where she coached former Washington player and current Northern Arizona head coach Loree Payne, winning the 1997 State A title.

“Rob taught me how to have real, organized, meaningful practices and how to really value practice time,” she said. “He was really great at taking game-like situations, breaking them into practice situations. My practices looked a lot like how Rob ran his practices.”

Carla also learned lessons from watching other coaches over the years and by the simple act of being a coach and having to adapt. Those lessons came across the country, which she traveled as a military wife after she met her husband, Seth Cunneen, while in Havre. She taught, coached high school basketball and refereed NCAA Division II college basketball throughout their stops in Ft. Lewis, Washington, Ft. Benning, Georgia, and Ft. Bragg, North Carolina, before settling down in Texas, where Seth joined the oil and gas exploration company in Midland that her brother Ken Beattie is the COO.

The business of basketball was also a family affair for Carla. During her 10 years at MCA, she coached four nieces: Kayla (Beattie) Lehman, who went on to play college basketball at Arlington Baptist, and Alissa Beattie, Makenna Beattie and Leia Beattie, a freshman at Montana State. All are daughters of her brother Ken and his wife, Kelly (Pilcher) Beattie, Carla’s former Lady Griz teammate.

Their team sprouted from four wins in Carla’s first season into the 3A state champion in the Texas Association of Private and Parochial Schools by 2014, when Kayla was a senior and Alissa was a sophomore playing in the fourth-largest classification in the state. They continued to build the program, made four state championship games from 2017-20, and won three titles in a row from 2018-20. Makenna played in two title games and was a senior on the 2018 team. Leia played in four championship games and won three titles.

“I think we just created a family atmosphere, but we also had a lot of discipline and consistency and we had high expectations for the kids,” Carla said. “We pushed them to be their very best. It certainly didn’t hurt that I had some talented nieces.”

The family connections extend to the staff for Carla. Jim Beattie was an assistant for her all 10 years. Sister-in-law Kelly was there the past four years after having coached her own daughters when they were in junior high. Kayla returned as the junior varsity coach the past two years and will now be an assistant varsity coach.

The connections even extend to the boys team. Carla’s brother Steve is an assistant coach for the team that includes his son, Carla’s nephew Gabe, who will be a senior starter this year.

“When you’re coaching high school, it’s a big responsibility,” Carla said. “It’s something I didn’t take lightly because you’re not just teaching them how to shoot and play defense. You’re also hoping to have an opportunity to develop their character and help them along their path in life.

“It’s certainly a great affirmation when the kids and their parents tell you how they appreciate you. You know that you’ve made a positive impact in their life. It definitely feels good to hear. And it’s great because you’ve created lifelong friendships with your players and their families.”

Having created an extended family at MCA, Carla’s decision to retire was one of the hardest choices she’s made in recent memory. It stemmed from her desire to watch Leia play at Montana State and to spend more time with the 5-year-old nephew of her twin sister Crista in Philipsburg.

Carla sounds at peace with her decision but hasn’t completely closed the coaching door because she doesn’t know what the future holds. She’s also not leaving sports entirely, staying on as an athletic director at MCA and taking on tasks like scheduling basketball games and officials, helping manage facilities and giving back by sharing what she’s learned as a coach.

“I’m going to take this opportunity to kind of mentor the younger coaches there at the school and cheer them on and help them as they need and just be there for them,” Carla said.

And, of course, she’ll be using her extra free time to cheer on Leia, even though her niece will be suiting up for her college rival.

“I think that’s what you do as a family,” Carla said. “You support each other.”