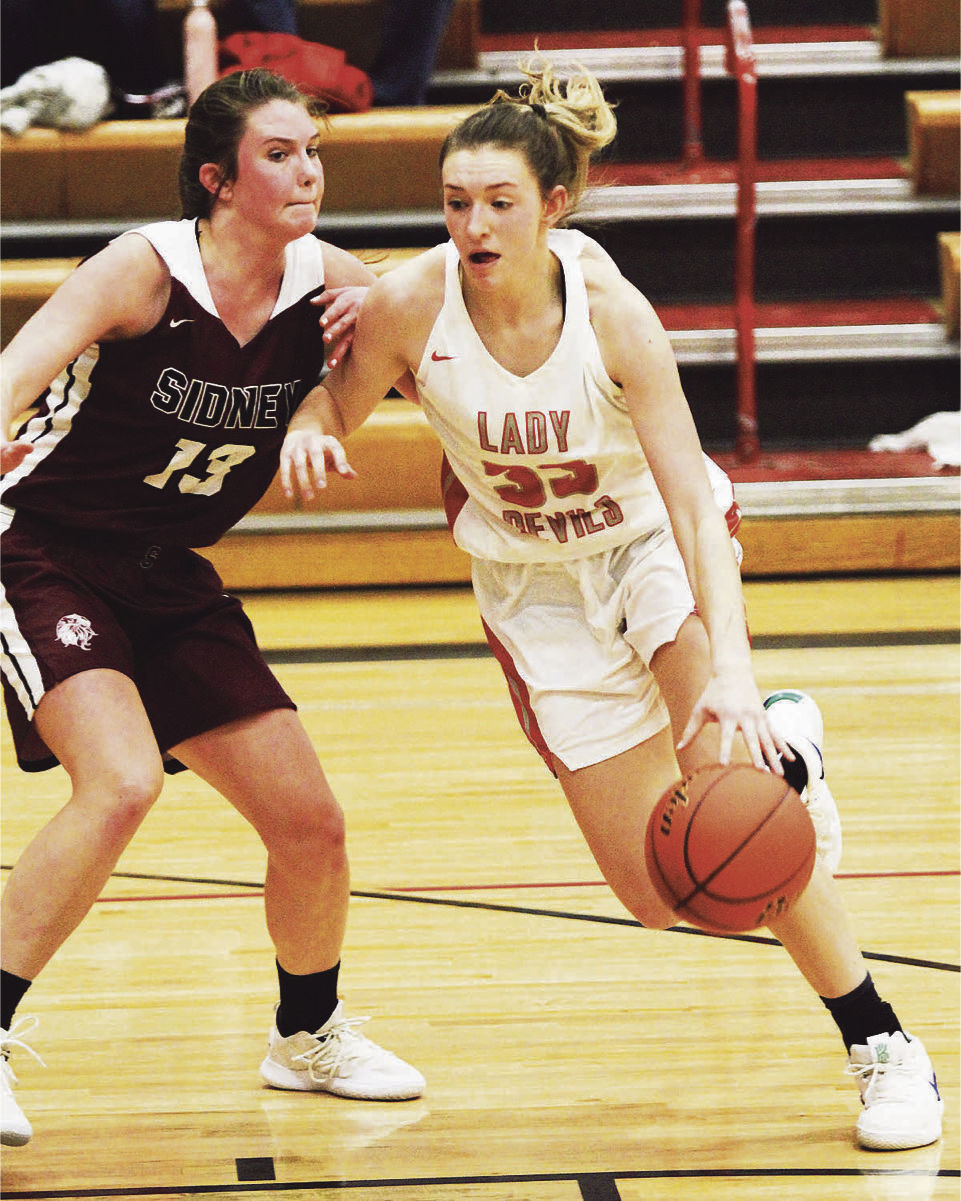 Karsen Murphy hopes to lead Glendive back to the Class A state tournament this week at the Eastern A Divisional tournament. 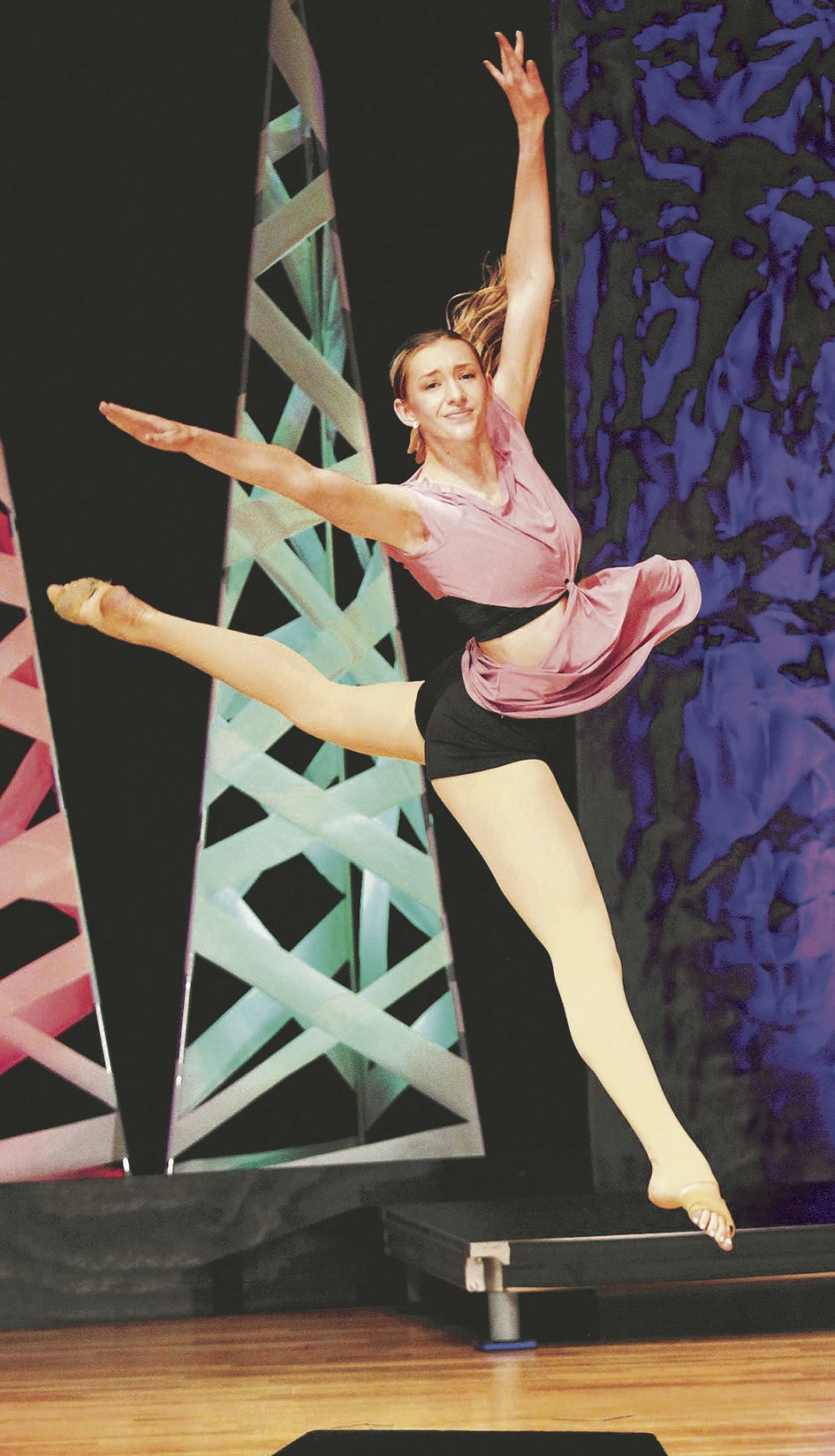 Glendive senior Karsen Murphy has danced since she was about 3 years old. 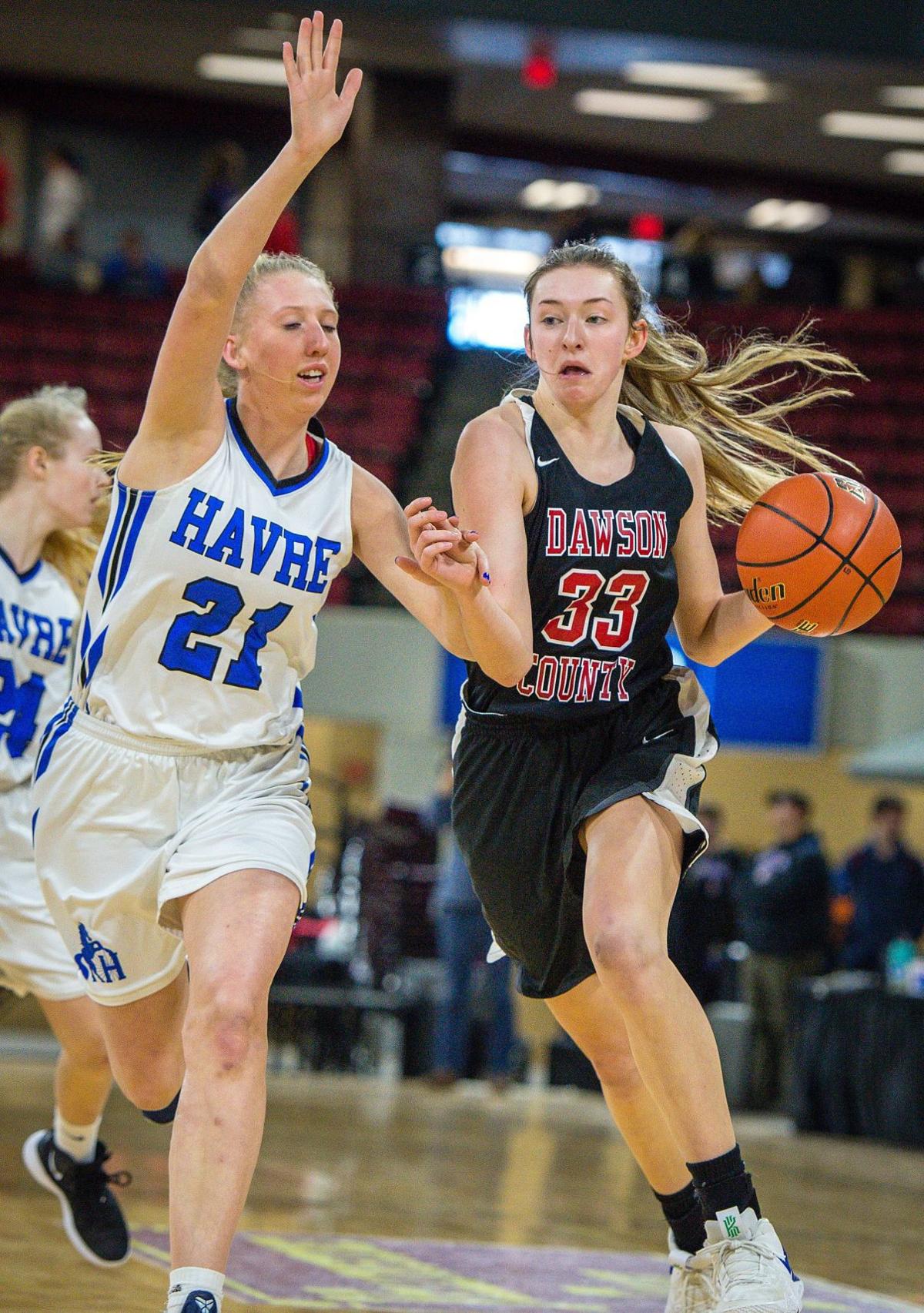 Glendive's Karsen Murphy, pictured driving past Havre's Kadia Miller at the 2019 Eastern A Divisional tournament last February, will continue her career at Montana.

BILLINGS — Kayla Rivas has dealt with a good problem in her last four years as Glendive girls basketball coach.

Four years ago, Rivas inherited a talented group of freshmen, led by Karsen Murphy, a 6-foot wing who Rivas called “multi-faceted.” Murphy will continue her career at the University of Montana, thanks not just to her talent but to her tireless work ethic.

Murphy has packed her life full of activities. Besides basketball and school, she’s a lifelong dancer who was crowned Miss Montana Outstanding Teen 2019.

Yes, sometimes Rivas wishes Murphy would do a little less. A fresher Murphy would be a scary proposition for Glendive’s opponents. But Rivas knows that her team’s chances to succeed at this week’s Eastern A Divisional tournament (beginning Wednesday at First Interstate Arena at MetraPark) would be basically nonexistent if Murphy wasn’t wired this way.

“Karsen is going to be successful and she’s going to have a standout career at the University of Montana because she’ll refuse to do anything else,” Rivas said. “She has this mentality where, if she doesn’t know how to do it, she’ll figure it out.”

Murphy is so flexible, her back looks like it will snap in half when she goes up for a rebound, Toms said. Smooth footwork helps Murphy glide around the court, and she looks graceful even when she falls.

“You can definitely tell she’s a dancer,” Toms said. “She’s a lot more agile than Kasidi and I are.”

Murphy’s late grandmother, LaDonna Jimison, started a dance studio in 1978. Murphy joined LaDonna’s School of Dance around the age of 3, and she’s focused on ballet and lyrical dance during her time at the studio. She enters three to four dance competitions every spring, and she’s performed in the Nutcracker for years. She played Clara in Glendive’s most recent Nutcracker.

Murphy takes dance classes from 5 to 8:30 p.m. on Sundays. On Wednesdays, she teaches second-to-eighth grade dancers from 6:15 to 8:15 p.m. before partaking in another class, which lasts until 9:15.

“It’s a different way of moving your body. It’s kind of a break for me from the high intense pressure of basketball,” she said. “Dancing kind of lets me hang loose and do whatever I want.”

A month before her Miss Montana Teen honor, Murphy set a State A track record with a triple jump of 37 feet, 11 ½. She helped the Glendive volleyball team earn its first ever state trophy in November.

“When I have an hour or two to myself, I’m definitely sleeping,” she said. “I need my rest because otherwise I’m up late doing homework or wake up and got morning practice. But I love it. There are some days where I don’t have anything, and I’m like, ‘I need to do something.’”

Despite all of her interests and hard work in the classroom, Murphy’s main focus is basketball. This season, she's averaging 13.4 points per game and shooting 39.2% on 3-pointers. She's a good ball-handler who can post up on small players and punish bigger players off the dribble. On the other end, she’s an excellent rebounder and lock-down defender.

“She’s one of the best defenders that I’ve coached,” Rivas said. “She’s hard to pass around, she’s hard to shoot over and she’s hard to get around. Her arms are long, her legs are long. She just changes things for people. You think something’s going to be there, and then it’s not.”

Murphy and her teammates believe they can contend at the State A tournament, considering their talent (Toms will play at Sheridan College in Wyoming, and Walker has multiple college offers). But merely getting there will be difficult.

The Eastern A Divisional includes No. 1 Hardin, No. 2 Billings Central and No. 3 Havre, with star players everywhere — Central sophomore Mya Hansen and Havre senior Kyndall Keller are also UM-bound. The Red Devils’ first-round opponent on Wednesday is Laurel (12-6), a team with one more win than Glendive (11-6) that reached state last season (albeit with Hansen, who transferred to Central prior to this school year). The Red Devils went two-and-out at last year’s divisional tourney.

“Usually at this point of the year, I’m like, 'Well if this doesn’t work out, I have next year.’ But there’s no next year now, so it is kind of nerve-wracking,” Murphy said. “But it’s not over. We still have a lot of work to do.”

A lot of work hasn’t slowed Murphy down so far.

What to know: The Laurel and Sidney boys get the tournament rolling at 11 a.m. Wednesday, followed by the Livingston and Miles City girls at 12:30 p.m. … The top four boys teams and top four girls teams advance to the Class A state tournament to be held in two weeks at the Metra. … Semifinals will begin at 3:30 p.m. Friday, and the championship games are set for 6:30 p.m. (boys) and 8 p.m. (girls) Saturday.

About the boys tournament: The field includes Class A’s top two scorers in Livingston’s Brendon Johnson (26.7 points per game) and Hardin’s Famous Lefthand (23.8). Laurel’s Colter Bales is fourth (18.1), and Havre’s Kellen Detrick is fifth (16.2). … Billings Central, which is No. 5 in the 406mtsports.com Class A rankings, is the defending Eastern A and State A champion. … Top-ranked Hardin is 18-0 but needed a Lefthand buzzer-beater to defeat Livingston in the teams’ first matchup, and the Bulldogs edged Central in double overtime in their second meeting, which was played at the Metra.

About the girls tournament: The No. 1 (Hardin, 17-1), No. 2 (Billings Central, 16-2) and No. 3 (Havre, 17-1) teams in the 406mtsports.com Class A rankings are in the field. … Havre is the two-time defending state champion, while Central is the reigning Eastern A champ. … Three players who have signed or committed to the Montana Lady Griz will take the floor this weekend. Havre’s Kyndall Keller and Glendive’s Karsen Murphy are both seniors and have signed letters of intent, while Billings Central sophomore Mya Hansen has given a verbal commitment. Keller leads Class A in scoring, averaging 20.1 points per game. Hansen is third (17.1) and Murphy is seventh (13.4).