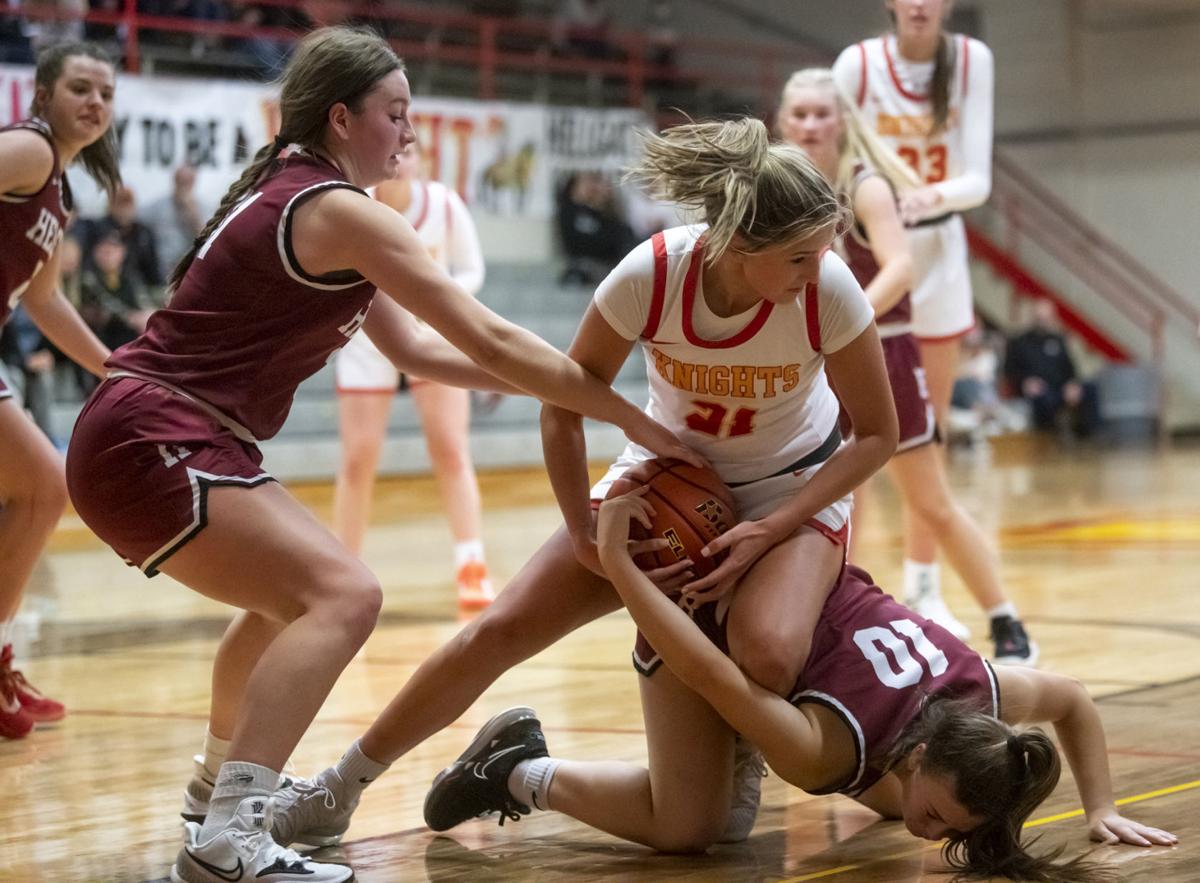 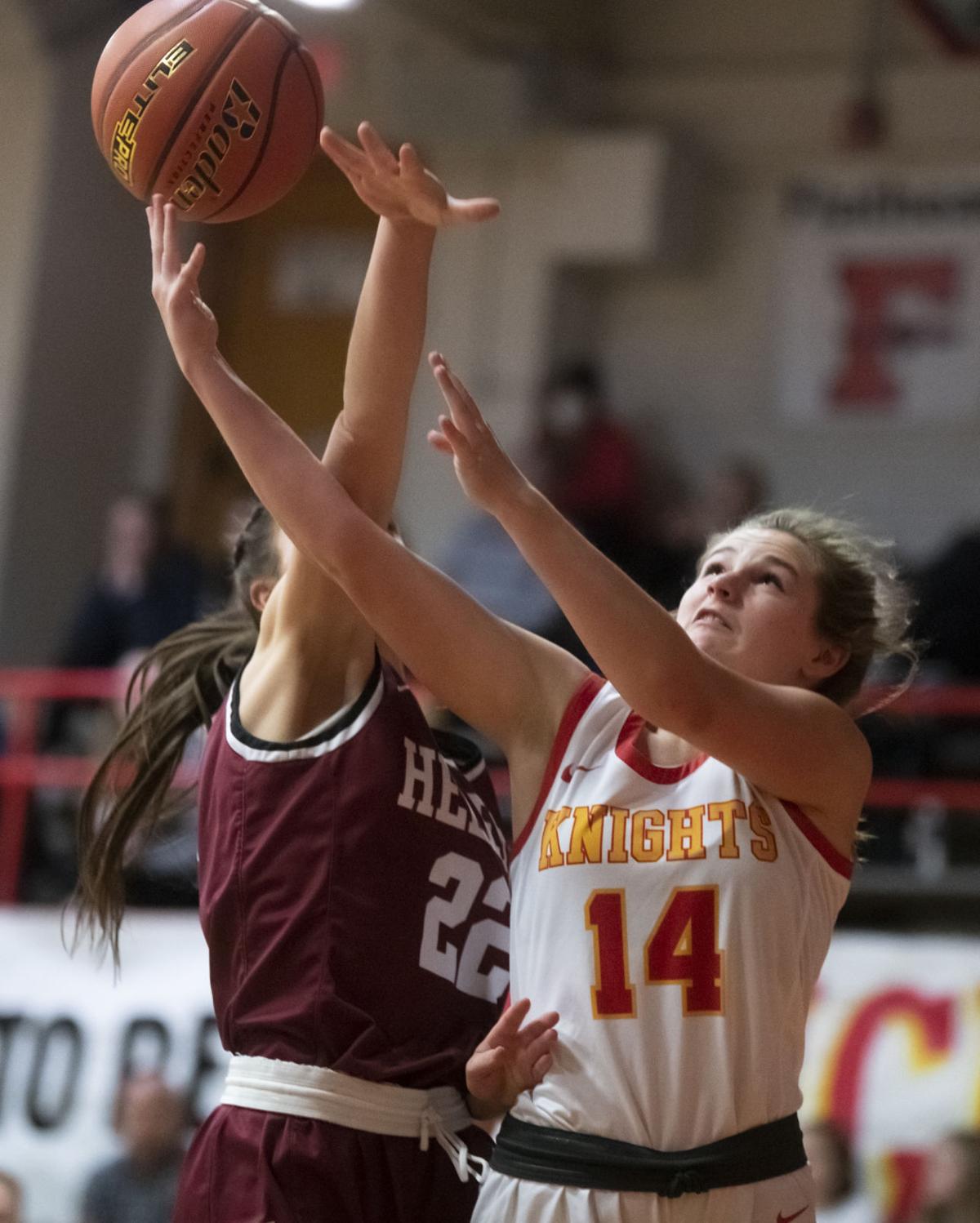 Hellgate’s Hailey Flamand (14) goes for a layup against Helena’s Logan Todorovich (22) during Saturday's game in Missoula. The Knights won, 64-30. 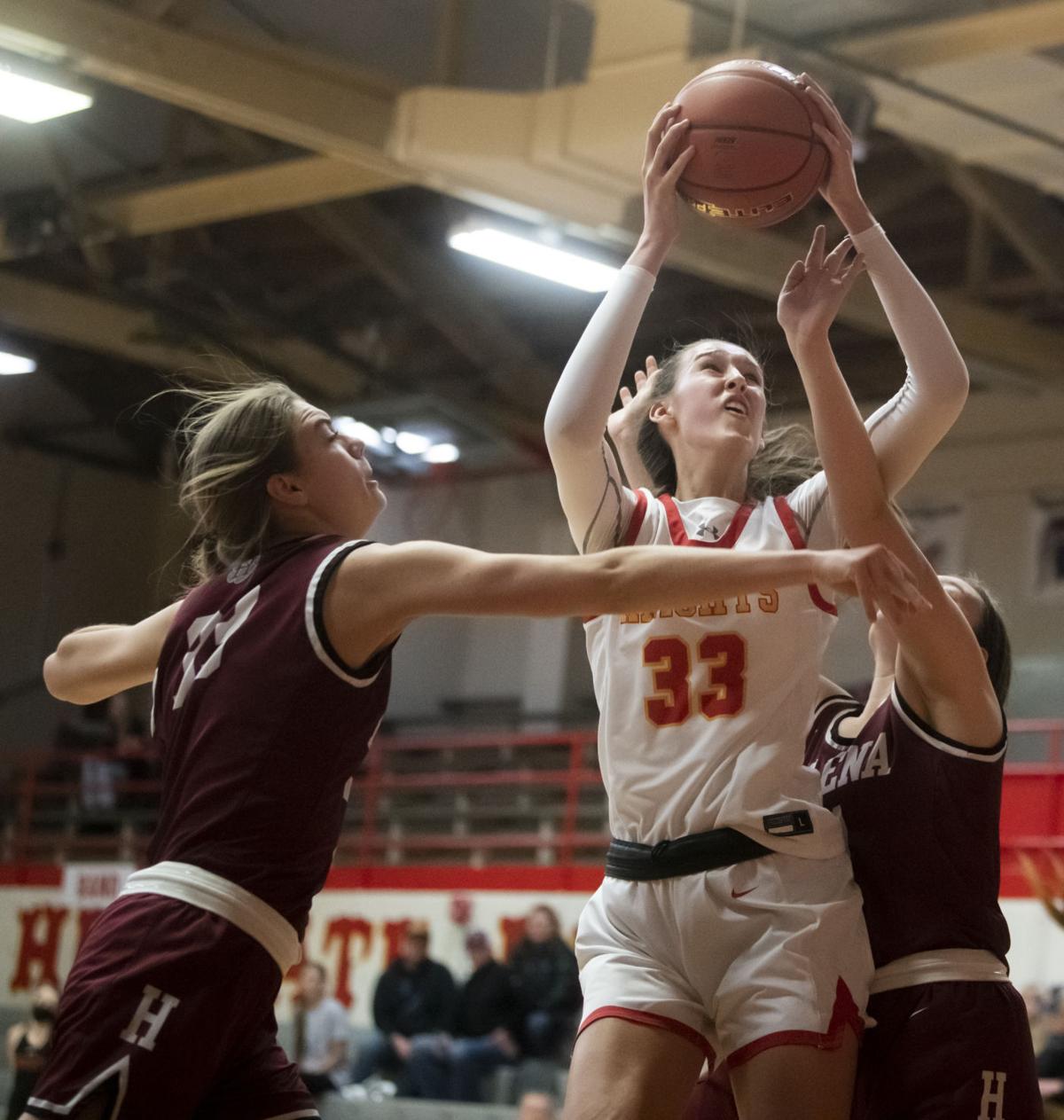 Hellgate’s Hailey Flamand (14) goes for a layup against Helena’s Logan Todorovich (22) during Saturday's game in Missoula. The Knights won, 64-30.

MISSOULA — It's not just the turnovers that indicate the effectiveness of Missoula Hellgate's defense.

It's the rushed, altered and blocked shots. Not to mention the ill-advised shots lobbed up by an opponent that's feeling a little overwhelmed.

On Saturday, the Knights made a rock-solid Helena girls team look mighty rusty, forcing 28 turnovers en route to a 64-30 win at the Hellgate gym. The Class AA third-ranked Knights improved to 4-0.

According to Hellgate co-coach Brady Henthorn, the defense of his team has come a long way even since last March, when the Knights reached the state championship game.

"You can tell that the girls have bought into it. They understand how important the defensive side of the game is and they just continue to run with it," he said. "The thing that's so special about our defense is they all do it together. You have to beat all five of us to get a bucket."

The Knights like to throw everything but the kitchen sink at their opponents, including  full-court man, full-court zone, half-court man and half-court zone. They're in your face on the perimeter, and when an opposing player does manage to work the ball into the paint, Hellgate usually has 6-foot-6 center Alex Covill waiting to block and alter shots.

"We've seen a lot of high-pressure defenses, but obviously Covill changes a lot when we attack," Helena coach Ben Dudek said. "That causes some uncertainty.

"They're a very good team, well-coached and under control. That group has been at it a long time. We still have some ways to go in our control and physicality to compete at that level. But now that we've seen it, we know what it feels like."

Hellgate forced 11 turnovers by the Bengals (3-2) in jumping to a 17-5 lead in the first quarter. Covill scored 10 points in the period, including six on close-range shots and four at the foul line. The Knights stretched their lead to 32-10 by halftime, with Covill accounting for 14 points.

Hellgate never let up on its defense in the third period, forcing six turnovers and holding Helena to nine points. By then, the outcome was a foregone conclusion.

"We work a lot on our defense in practice, and it's something we all take pride in," said Hellgate senior guard Bailee Sayler, who scored 12 points. "Like most of us would rather have a good block or a good steal than have a bucket.

"Defense is something we can control. Sometimes shots aren't going to fall."

The Knights will continue to fine-tune their defense with their biggest games ahead. It's no secret to anyone what their goal is this winter: state supremacy.

"We're on a mission this year," Henthorn said. "These girls, they know what they want. They're all going for the same thing.

"The experience we have definitely helps. We're able to focus on the details and break down every segment of the defensive side, and it shows out there. The girls are confident and know exactly where to go."

The Knights will be back in action Tuesday when they play at Belgrade. Then on Thursday, they will play host to intracity rival Sentinel.